Is Jeff Koons taking on collaborations with open arms or awkward hand syndrome? Jeff Koons is no stranger to collaboration. In fact, he’s a bit promiscuous when it comes to sharing his artistic talent. You would think since Koons sold Balloon Dog (Orange) at auction for $58.4 million in 2013 (the most expensive work sold by a living artist) that he would kind of just do his own thing and keep shooting for higher and higher auction records.

But no, the man loves a good artistic partnership. He’s worked with musicians, clothing brands of all kinds, iPhone apps and alcoholic beverage companies, each more bourgey than the last. Here are the best of these collaborations in an effort to come to a decision about whether or not we even like his work. 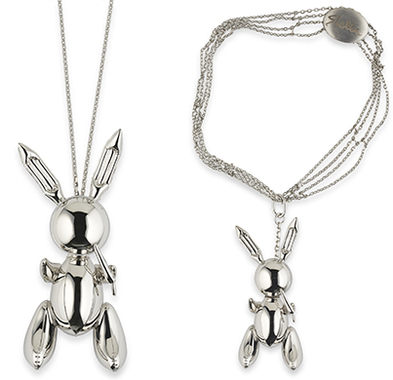 This collaboration gets style points purely because Stella McCartney is cool, not because this necklace and charm bracelet are. In fact they are both very, very ugly. But alas if you call it a Jeff Koons then the money will come. This necklace sold for $337,347, which is just bonkers if you ask me. This may be coming from the tragic loss of my own rabbit, Bubbles or a particularly disturbing viewing of Donnie Darko at the age of 12, but I just don’t see why one would want this dangling from their body. That might be something to take up with my therapist. 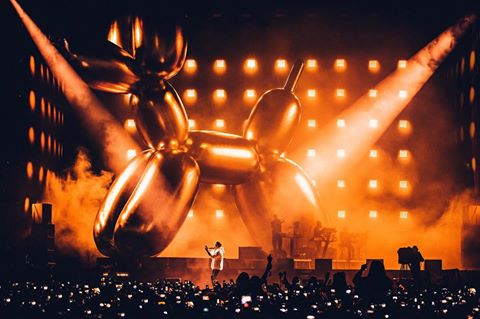 Now this is a little more impressive. Jay-Z had just released his album, 4:44 when he decided to have one gargantuan (40 feet tall to be exact) Jeff Koons piece as the centerpiece of his stage design, which was a great decision because look how fuggin’ cool that looks. Unfortunately, that’s where the depth of the collaboration stops. We still aren’t sure why Jay-Z chose this as his backdrop as opposed to… literally any other cool looking giant sculpture. I mean sure, it’s badass looking, but it doesn’t add much to the content on Jay-Z’s music. And this collaboration is just no match to that of Beyoncé and Pipilotti Rist on Queen B’s track Hold Up on Lemonade (even though that one was sorta plagiarized, but I digress). 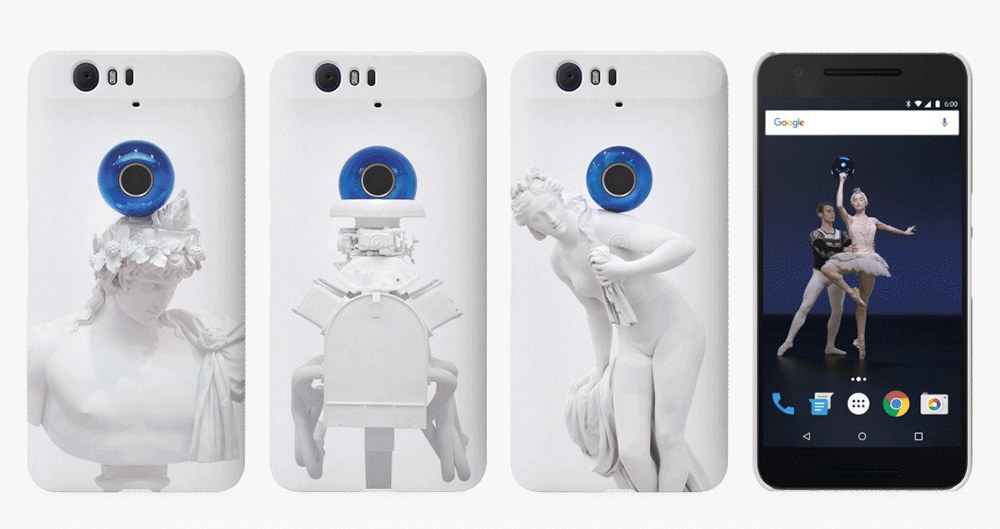 These phone cases can go on record as the cheapest Jeff Koons piece one could own. For only $40 you could have a Nexus phone case with one of three sculptures from Koon’s Gazing Ball series: Diana, Bust, or Mailbox. And as an added feature, there is a live wallpaper that comes with the case called The Gazing Ball Ballet. “By double-tapping the screen, users will be able to enjoy one new movement every few days, effectively transforming your phone screen into a piece of performance art.” This is very cool but also means that you would have to get a Google phone instead of an iPhone and who is going to do that? But we respect Koons’ attempt to break into the tech world and also make art affordable for the people. It was very let-them-eat-cake of him. 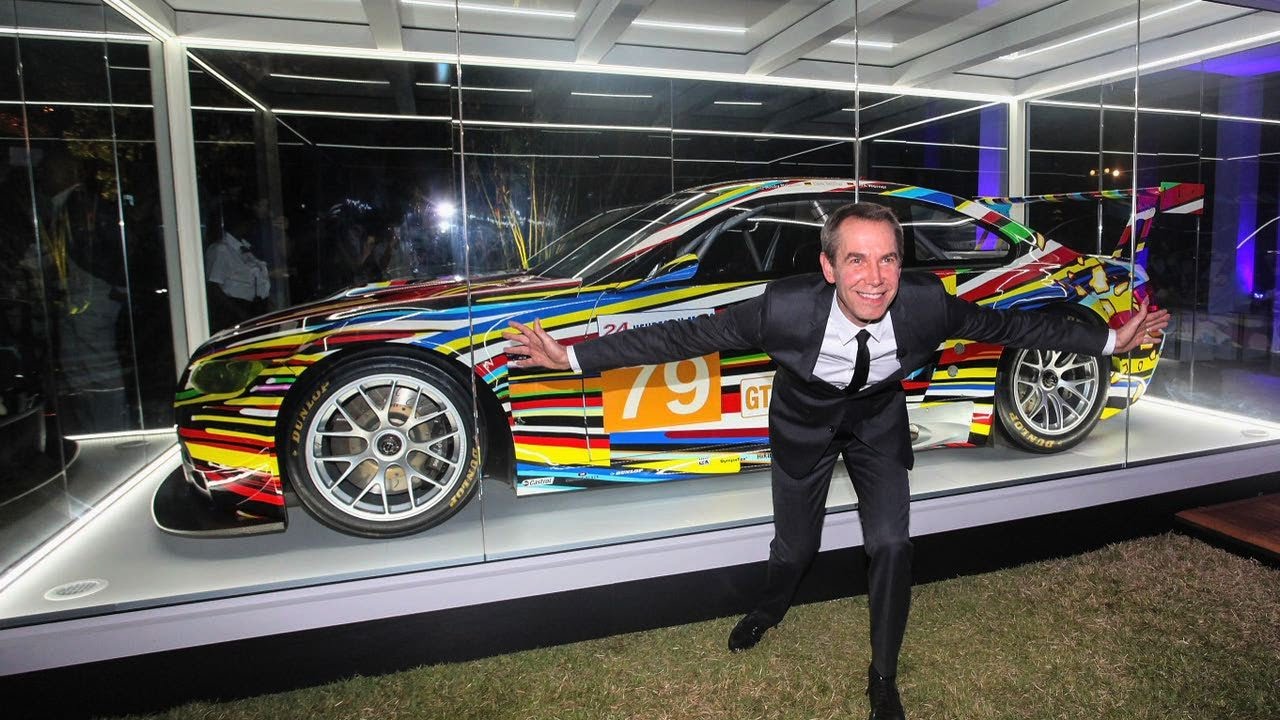 Every so often, BMW chooses a famous artist to design their “Art Car” and Koons has been wanting to do it since 2003. Finally, ten years later, BMW presented with Koons’ design at the opening of Art Basel in Miami Beach. Koons is in good company with artists like Alexander Calder, Frank Stella, Roy Lichtenstein, Andy Warhol, Robert Rauschenberg, David Hockney, Jenny Holzer, and Olafur Eliasson having also designed cars. But Koons pays special tribute to Andy Warhol by making the racing number 79, the same year that Warhol created his Art Car. Personally I think all cars are just large, luxurious jelly beans, but it obviously made Koons exceedingly happy (just look at those arms) so we’ll give this collaboration full points. 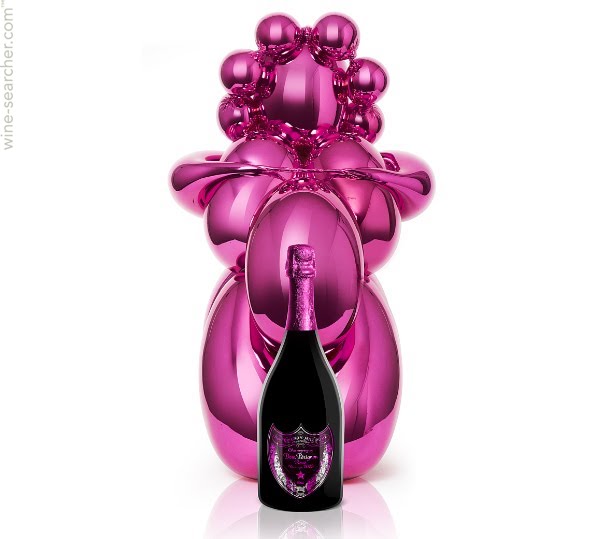 If you were wondering what the pinnacle of bourgeyness is, it’s the collaboration between Dom Pérignon and Jeff Koons. This bottle holder is modeled after Koons’ Balloon Venus, which was modeled after the Venus of Willendorf and it costs $20,000… “Why so expensive?” you may ask, and the short answer is because they can. “But who would buy it?” you may add. Koons says that “[he] know[s] that [his] mother will want one… But [he] hope[s] a lot of collectors, people who are already involved with [his] work, will give these as gifts to their friends.” So if you still haven’t gotten around to finding that perfect gift for your bff, consider this. “But does it even taste good?” you ask. Here is what the makers have to say about it: “Its colour is deep, with light amber and copper tints. The wine’s bouquet erupts theatrically from its silken fleshy body, just as the sculpture’s reflective surface envelop the viewing in a dynamic invitation to tasting.” It sounds better than Franzia, but you can never be sure… 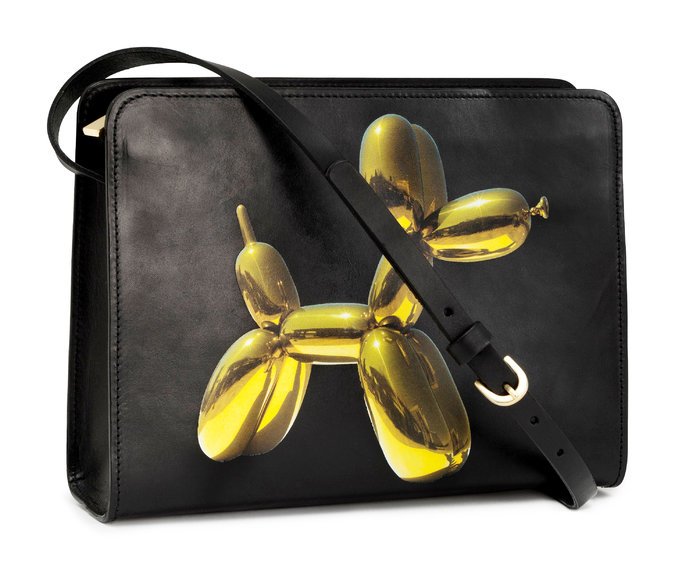 This nifty little purse is the lovechild of H&M and Jeff Koons. And though you can’t put a price on love, you can put a price on this. And that price is $49.50. Pretty good for a Koons piece right? Koons stated oh so diplomatically, “I want my work to be accessible to people.” Specifically the people who don’t have $58.4 million lying around with which to purchase the original piece that this purse is representing. Artnet News claimed this as “this summer’s most irksomely ubiquitous handbag.” But they also thought that the bag was going to be a small balloon dog, not merely picture one so they were going to be let down no matter what. Personally, I don’t find it that annoying, but this is not Koons’ best collaboration so let’s move on. 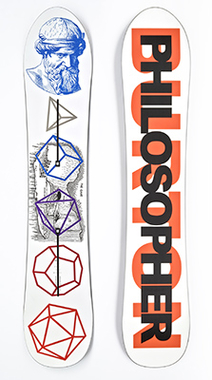 This collaboration is one of the best because they did it for the kids. Jeff Koons teamed up with the snowboarding company, Burton and also Plato (pictured left) to make “The Philosopher.” Jeff Koons’ kids got him to start snowboarding in 2013 and he fell in love with the sport. He claims, “It’s an extremely philosophical, transcendent sport,” which is mildly confusing but nonetheless was the inspiration for this design. The board costs a steep $5,000 (starting to notice a trend here?), but it’s ok because 100% of the proceeds went to the Chill Foundation, a non-profit that “provides opportunities for underserved youth to build self-esteem and life skills through board sports.” Whatta guy that Jeff. 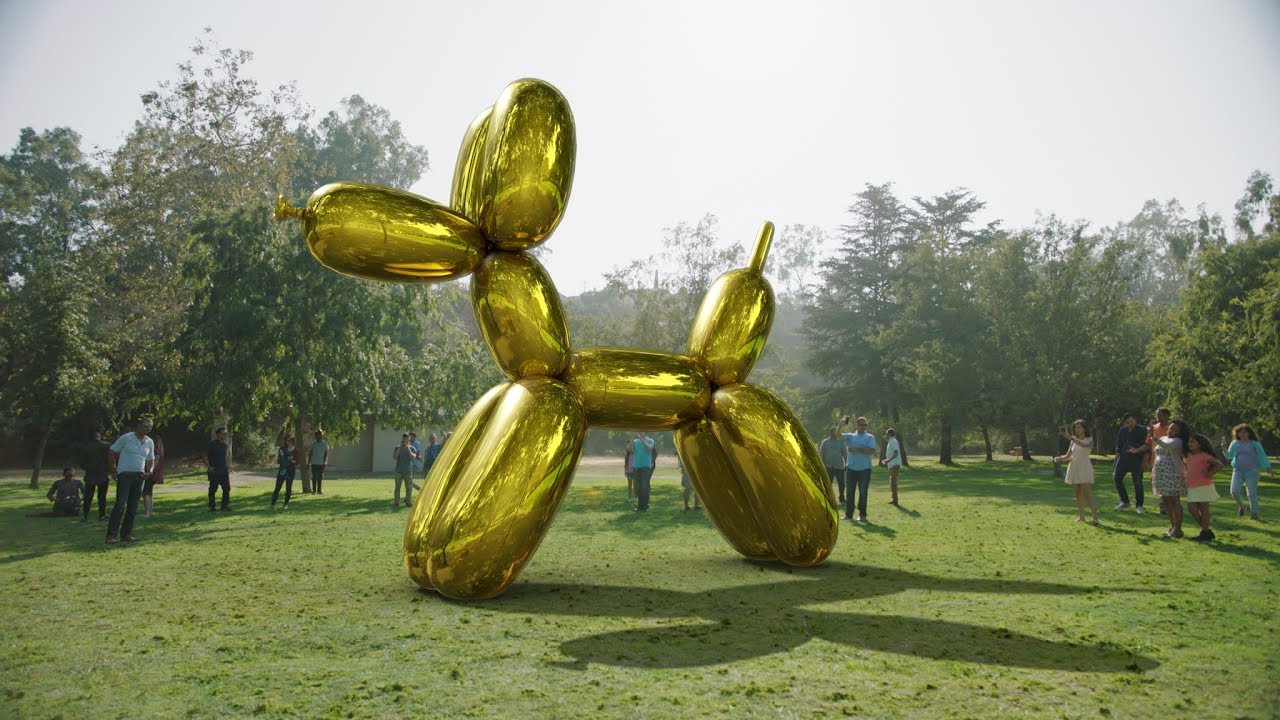 As collaborations go, this one is pretty brilliant. I mean using augmented reality to turn some of the world’s most famous tourist attractions into your own personal gallery is beyond inspired. Jeff Koons is a marketing genius. Among the locations where one can project 3-story tall Jeff Koons sculptures are Millennium Park in Chicago, the National Mall in Washington, the Venice Boardwalk in Los Angeles, Hyde Park in London, Copacabana Beach in Rio de Janeiro, Central Park in New York, the Sydney Opera House in Australia, and on the Champ de Mars in Paris. And the only way to unlock the filter is by being within 1000 feet of the site so we know it’s legit. On another note, I feel it’s important to discuss what an underdog story this is for Snapchat. They started out as a chill way to send nudes and look at them now. On top of the world. It’s really touching to see.

2. Louis Vuitton (you knew this was coming) 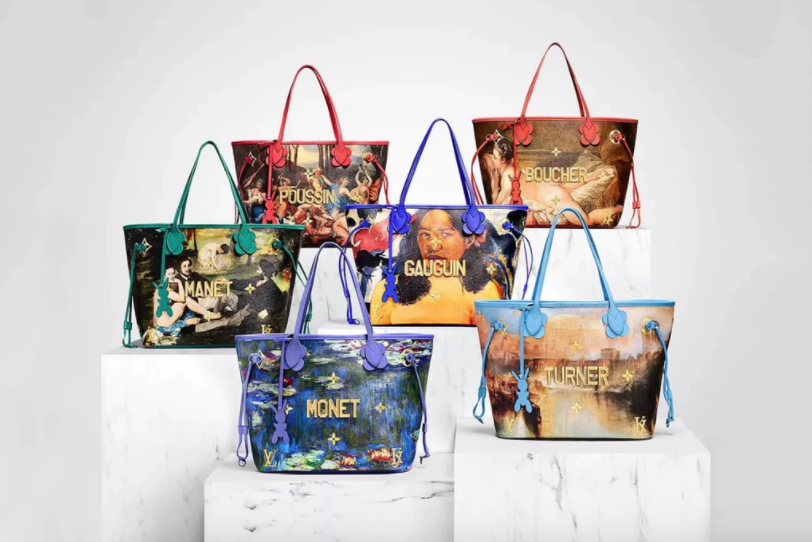 Of course Jeff Koons has a collaboration with Louis Vuitton. There was just no way this wasn’t going to happen. Louis Vuitton has worked with Cindy Sherman, Richard Prince, Yayoi Kusama, and most notably, Takashi Murakami over the course of it’s everlasting reign over luxury accessories and just had to add Koons to the list. This was the first time in Louis Vuitton history though that they allowed an artist to reconfigure their monogram into the initials of the artist. Gasp! Each bag has on it a work from some of the greatest names in art history: Poussin, Boucher, Manet, Gauguin, Monet, Turner, da Vinci, Rubens, Fragonard, van Gogh, and Titian. All the heavy hitters (all the white, male heavy hitters that is) are represented and the collection was so successful that the fashion house decided to produce another collection with even more famous dead guys! Hurray! All jokes aside, Louis Vuitton put out some fire ads for this campaign that you can watch here. 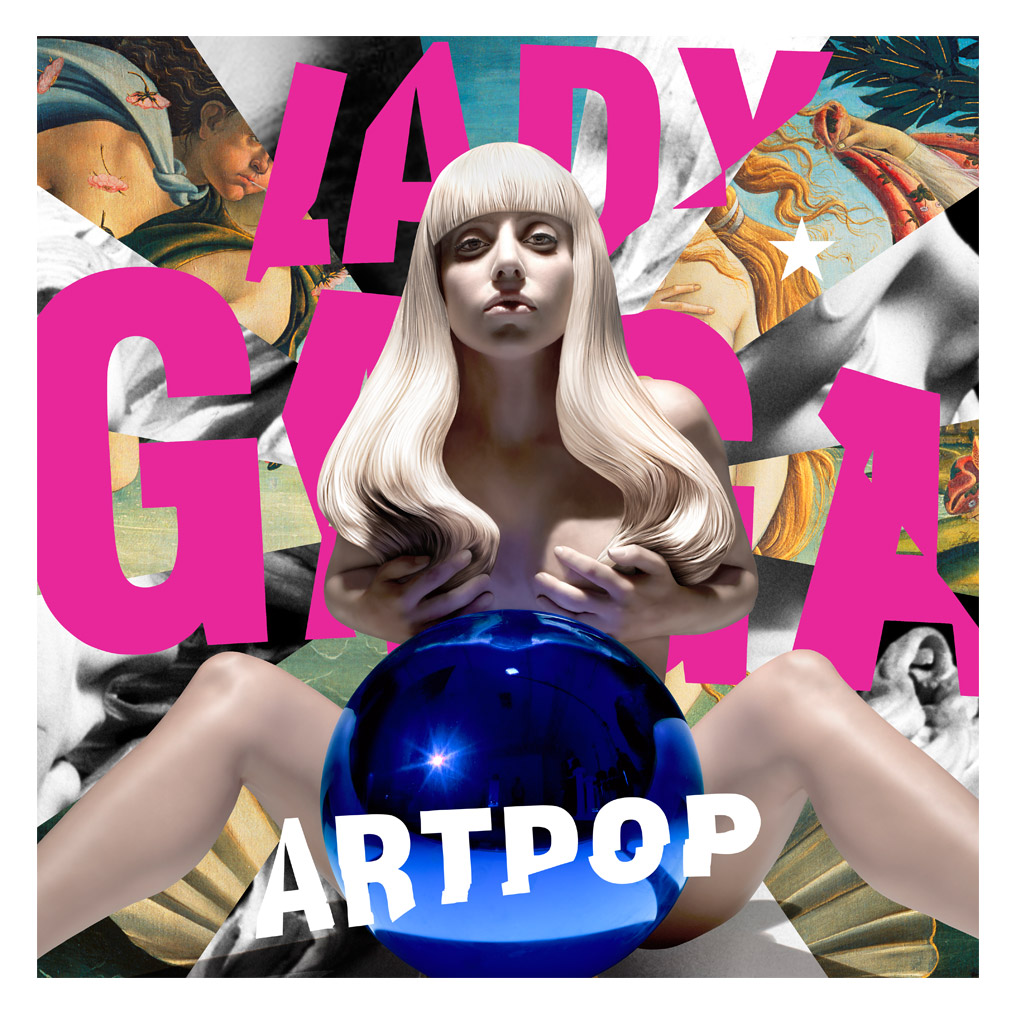 The best of Jeff Koons’ collaborations is hands down, Lady Gaga’s Artpop album cover. Lady Gaga was so into Koons’ Gazing Ball Series when she first saw them that she got down on the floor with them and promptly decided that she wanted to be turned into a Koons sculpture herself, which she mentions in her song, Applause: "One second I'm a Koons, then suddenly the Koons is me.” The background of the album is cut up little slivers Botticelli’s Birth of Venus and Bernini’s Apollo and Daphne. The background alludes to a transformation within Gaga, a new movement if you will. Also it gets an A+ for art history incorporation. Applause went on to be Lady Gaga’s most famous song, more so than Born This Way, which really makes me question the American public. But nonetheless, it’s a fire track on a fire album, which you’ve probably heard on the radio more times than there are flecks of gold in Botticelli’s Venus’ hair.