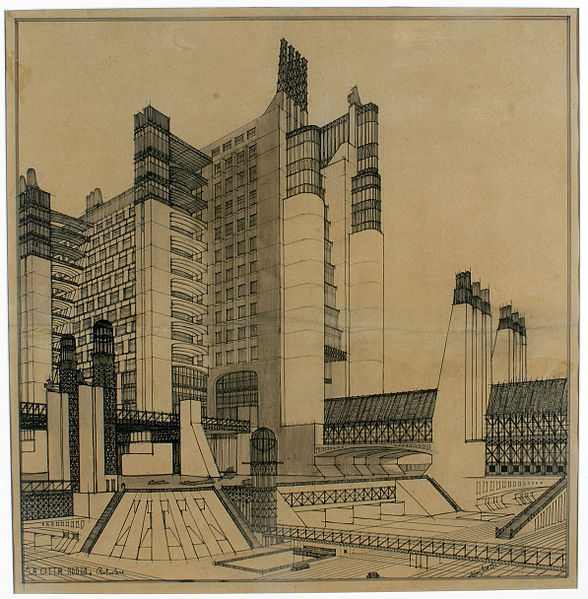 Como, Italy. An idyllic town alongside Lake Como known for its stunning scenery and gorgeous architecture. It is, after all, the same lake where George Clooney keeps a home. But did you know Como is also home to a collection of drawings by a radical architect considered to be the father of modern Italian architecture? It’s true! So sure, you could visit Lake Como to try and catch a glimpse of the rich and famous on vacation. Or you could pop into the Pinacoteca di Como to view the work of the groundbreaking Italian Futurist architect Antonio Sant’Elia, whose architectural designs have been hugely influential since the early 20th century – even though none of his Italian Futurist works were ever built.

When Sant’Elia joined the Italian Futurists in 1914, he was a young architect at the beginning of his career. Born in Como in 1888, he studied architecture and eventually settled in Milan. Milan was the home base for the Italian Futurists at the time. Considering Sant’Elia was already active in the avant-garde scene, he would have been quite familiar with the group before joining them. The Italian Futurists viewed themselves as a cultural movement. They wanted to shock Italy into the future through art: painting, sculpture, poetry, fashion, photography, and architecture. To achieve this, they embraced the speed and violence of modern life. They celebrated the changes brought on by industrialization, like the automobile and electric street lights. They often used the term dynamism to describe the chaotic, vigorous energy they wanted to express through their work.

Shortly after Sant’Elia joined the Italian Futurists in 1914, he published the “Manifesto of Futurist Architecture.” This was the group’s first manifesto on architecture. Sant’Elia’s text outlined what the Futurists despised about the architecture of their time and the changes they wanted to make. But why a manifesto? This was the best way to share your ideas with others in the early 20th century… before smartphones made us super connected all the time. These printed texts could be easily reproduced and distributed. It was very common at the time for new architectural and artistic movements to use manifestos to share their ideas. The Italian Futurists had manifestos on everything.

But what was Sant’Elia trying to accomplish through his manifesto? Let’s do an exercise to understand what the Italian Futurists and Sant’Elia were challenging. What do you think of when you think of Italian architecture? If you’re like most people in the early 20th century (and truthfully, most people today), when you think of Italian architecture, the buildings that probably come to mind are something along the lines of the Pantheon in Rome, or the Duomo in Florence, or the palazzos of Venice. These are examples of Italian architecture steeped in history from the periods of ancient Rome, the Renaissance, and the Baroque. But what about now? What architecture do you think of that represents modern or contemporary Italy? Anything? Nothing? If your answer is nothing, that’s the problem the Italian Futurists were trying to solve. But they were thinking about this over one hundred years ago! Italy was – and still is – known for its historical past. But the Italian Futurists were interested in the now. And in the future. So how does that translate into architecture?

Let’s take a look at Sant’Elia’s drawings titled “La Città Nuova,” or “The New City '' in English. The “Manifesto of Futurist Architecture'' was illustrated with this series of drawings depicting enormous megastructures. In this series Sant’Elia rejected the idea of the horizontal city. Instead, as we see in “La Città Nuova,” he designed massive vertical structures, forecasting the skyscrapers that would come to define the contemporary metropolis. At the beginning of the 20th century, skyscrapers were new and exciting. They were the future. And in order to build these enormous megastructures, the latest building methods would need to be used. There was no place for wood or stone in Sant’Elia’s design. Those were the old building materials used in previous centuries. Steel. Concrete. Mass-produced glass. These were the materials of the future! These were the materials building the skyscrapers of the time.

The iconic Woolworth Building in New York City had just been completed only a couple years before the publication of Sant’Elia’s manifesto. At almost 800 ft in height, with 58 stories, the Woolworth Building would remain the tallest building in the world until 1930. But would Sant’Elia and the Italian Futurist have approved of the Woolworth Building? No! Absolutely not. But why not? Because it was designed as a Gothic Revival skyscraper. It was another example of what they were trying to fight in architecture. The building of the future – the skyscraper – being built in a style of the past.

To create the architecture of the future, Sant’Elia declared that Italian Futurist architecture would reject the past. For centuries, Western architecture had sought to mimic previous architectural styles. Neoclassicism utilized architectural elements, like columns in the Greek orders, that were first used by the ancient Greeks, then by the ancient Romans, then by Italian Renaissance architects, then…well, you get the idea. Another Western architectural style, Gothic Revival, styled houses, shops, skyscrapers like the Woolworth Building, and more to mimic the appearance of the soaring Gothic cathedrals of Medieval Europe. So, to reject the past, Sant’Elia rejected ornamentation. In “La Città Nuova,” we see his sleek megastructures, free from the useless decoration of pediments and ribbed vaulting. And even though Sant’Elia’s designs remained unbuilt, it’s his ideas on how to design for the future that inspired generations of architects to come.

So, what is the legacy of Antonio Sant’Elia? Well, it’s complicated. On one hand, his work is hugely influential in the development of Western modern and contemporary architecture. No survey of modern architecture is complete without his “Manifesto of Futurist Architecture” and the images that accompanied it. Contemporary architects, like the late Zaha Hadid, have noted Sant’Elia’s work as an inspiration. His megastructure designs foresaw and influenced many Western architects working after World War II. Groups like Archigram and architectural styles like Brutalism explored the potential of megastructures, along with also rejecting historical ornamentation.

On the other hand, the appreciation of Sant’Elia today ignores the proto-fascist associations of the Italian Futurists, and thus, Sant’Elia’s work with them. The Italian Futurists were nationalists who advocated for war with the belief that it would be a hygienic cleanse for the world. These political beliefs influenced some of the objectives outlined in “The Manifesto of Futurist Architecture.” Understanding the Italian Futurists politics explains why they were against Italian architects looking outside of Italy for design inspiration. Keeping with their beliefs, they volunteered to fight in World War I. Two prominent Futurists, Sant’Elia and Umberto Boccioni, died during the war. It was Sant’Elia’s death, on the battlefield, that made him an icon worth celebrating under Italy’s fascist government led by Benito Mussolini. Sant’Elia became an architectural icon during this period. He was celebrated in fascist Italy because he was an Italian figure who could be proclaimed as an inventor of modern Italian architecture. After World War II, a great debate was had in the Western architectural world to “free” Sant’Elia from fascism. And it worked! We rarely discuss this aspect of his history today. But to deny it is to deny ourselves a complete understanding of his legacy and influence.

Now if you find yourself in Como, looking up at the glorious historical architecture, make sure to pop into the Pinacoteca di Como to say hello to Sant’Elia. And while you won’t find any built structures by him – just drawings – there is one structure in Como worth checking out during your Sant’Elia pilgrimage. The Como War Memorial, designed by the Rationalist architect Giuseppe Terragni, was based on a sketch by Sant’Elia himself. Dedicated to the victims of World War I and built by the Italian Fascist government, the monument is a fitting tribute to the complicated legacy of the great Italian Futurist architect.

I fully support you