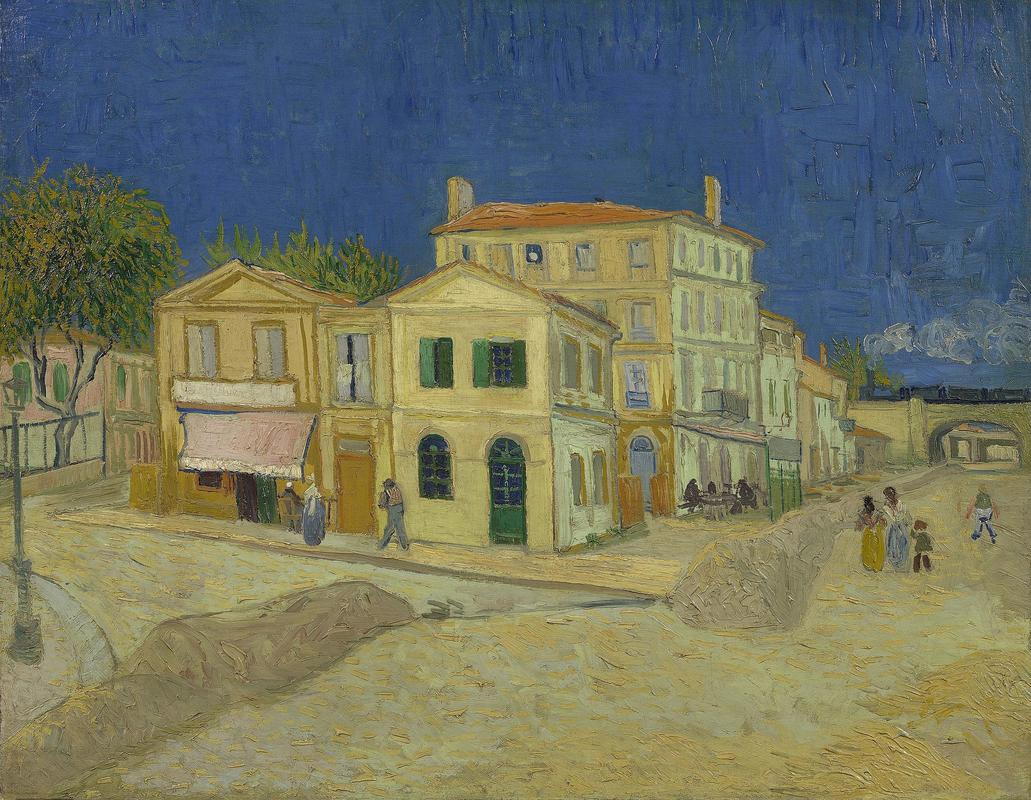 In 1888, Vincent van Gogh moved into a little Yellow house in the southern French town of Arles. This iconic house was a bright light of hope in the darkness of his life. In a letter to his brother, Théo, he wrote: “The sun dazzles me and goes to my head, a sun, a light that I can only call Yellow, Sulfur Yellow, Lemon Yellow, Golden Yellow. How lovely Yellow is!” Van Gogh had planned to turn this small Yellow house into an artist retreat for his friends and contemporaries. He saw a future filled with art and abundance. Drenched in Yellow, he imagined a life of contentment. He created over 300 works of art in the short time he lived there. At the time, there was a lack of treatment for his mental illness, so Van Gogh instead put his faith in sunshine.

Sunshine sustains all life on earth, but could also burn it all away. Yellow holds opposites. Its connotations ping-pong radically between positive and negative. Delicious bananas and repugnant Dijon (mustard is gross; fight me in the comments). We drink in cool, sweet lemonade, and piss out Yellow. Yellow smells like buttercups and all-purpose cleaner. It feels like sticky, sickly, sweet honey. It is bleach Blondes. It is jaundice. It is smiley faces and hazard signs. It is open plains and Golden coins. A friend with synesthesia once described Yellow as the clear sound of an oboe, but to me it sounds like Mungo Jerry and The Beatles (Yoko Ono was the best Beatle; again, fight me in the comments).

How to use Yellow:

Yellow is a primary color. The range of Yellows flows from rich, warm Cadmiums to acidic, cool Green Yellows to neutral, creamy Naples Yellow, to earthy Ochres. Its versatility makes it indispensable in any artist’s palette. Yellow is the complement of Purple; mixed with Red, it becomes Orange; mixed with Blue, it becomes Green. Yellow is super reflective to light so artists love using it to make things POP. As with a highlighter, artists use Yellow to emphasize important aspects in paintings: one example you may know well is the golden halos of saints.

How do you make Yellow?

Yellow is an ancient color with ancient roots. One of the “prehistoric primaries,” the earliest known yellow pigments were discovered in the cave paintings of Lascaux. Before the shade was distinguished from other named colors, Pink was often used to describe Yellow tones. Potentially and hilariously derived from an older German word, pinkeln means “to urinate.” Yellow pigments are derived from the earth, arsenic, and plants. Indian Yellow was (allegedly) made from the dried pee of cows who exclusively ate mango leaves. Yellow may be reserved for the holiest of angels but it simply can’t be divorced from pee, can it?

What does Yellow mean?

According to the humoral system of medicine, Yellow bile was associated with a choleric temperament: violent, unstable, rancorous, and hypocritical. In the middle ages, Yellow was seen as a deceptive and treasonous color. Dishonorable, untrustworthy, jealous, and duplicitous. In medieval art, Judas was often portrayed wearing Yellow robes. In Northern Italy, during the Renaissance, Jews were marked with a Yellow O. Perhaps this was a precursor to the Yellow stars Jews were forced to wear during the Holocaust.

In the Western world, Yellow developed a wide array of negative connotations. Yellow is currently the most unpopular color. A shock, I know, to us Yellow Power Ranger and Lemonhead fans. Yellow-bellied cowards shy away from the challenge of being called a chicken. In the 1900s, Yellow was considered quite the salacious color. A Yellow book cover became notorious as a marker for the most controversial and illicit French novels. In Oscar Wilde’s The Picture of Dorian Gray, the protagonist is corrupted by such a book. Wilde himself was iconically reported as being arrested holding a Yellow-bound book.

Why are Asians considered Yellow?

There is a Chinese saying that roughly states that “Yel­low gen­er­ates Yin and Yang.'' Yellow is the col­or of neut­ral­ity placed in the cen­ter of all col­ors – the “golden middle” of everything. In fact, it is in the very middle of the visual color light spectrum. In one Chinese creation myth, the universe began within a primordial cosmic egg. Within this egg, Yin and Yang became perfectly balanced, awakening a creator called Pangdu (盤古) who emerged and released our Yellow yolk universe. With their great ax, they cleaved the earth from the sky. Pangdu’s body became the landscape of our world. Their right eye became the Moon and their left eye, the shining Yellow Sun.

As global immigration increased, Yellow was soured from an auspicious color to one of racist hatred in the west. In the USA, the Chinese Exclusion Act was enacted in 1882. In 1895, the German Emperor Wilhelm II had a dream in which he saw a Buddha storming Europe on the back of a dragon. This dream was illustrated in a political cartoon commonly referred to as “The Yellow Peril.” These fears were the foundation for racism against Asians and Asian Americans that persists. But starting in the 1960s, “Yellow” as an identifier has been reclaimed by many as an act of resistance. One great example is the New York based activist group The Yellow Jackets Collective, whose mantra states: “We say Yellow again because at our most powerful we are a YELLOW PERIL and those who oppress us should be afraid.”

I was born Yellow. Growing up people used to call me a banana (Yellow on the outside and White on the inside).

My Jewish grandma was an oil painter and her favorite color was Yellow. She taught me how to paint with an Impressionist palette and the underpaintings were always done in Yellow Ochre. As a result, all my work begins with Yellow.

One of my favorite teachers was the Bay Area Figurative artist Bruce McGaw. Desperate for validation (as all art students are), I craved his hard-won approval. One day we were painting from the model when he told me, “It’s too small.” He looked at me as if he was waiting for the lightbulb to turn on. I wiped my painting away leaving only the Yellow underpainting behind.

At the end of the class Bruce came to look at my finished work and exclaimed, electric, “Ah! A painting in Yellow!”

I never heard about the yellow house until I read this article.

Thank you very much, I am doing a capstone project on the psychology of color and these are so helpful.

After watching the Doctor Who episode Vincent and the Doctor, I have a new found appreciation for van gogh and the way he saw the world!

Smart, personal, and packed with new facts — another excellent piece! I hope you’re doing one for every color!

I am very happy to find this post very helpful to me, as it contains a lot of information. I always enjoy reading quality content and this I found in your post.

Are you doing all the colors of the rainbow?! Love it!

Finally! Some love for my favorite color. Nice article!!