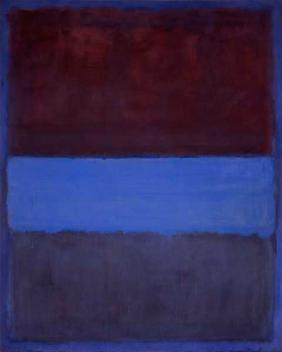 No. 61 (Rust and Blue) by Mark Rothko at the Museum of Contemporary Art, Los Angeles

The post-World War II period of the late 1940s to 1950s onward saw not only just a break away from old economic slumps, but also from the old classical painting styles. Considering classical realism was favored by a particular short-mustachioed dictator during his regime, it’s reasonable why the world would shy away from old school stuff like babies when faced with broccoli. Two twin homegrown American art movements emerged: Abstract Expressionism--characterized by energetic gesture--and its laid back, more mellow brother, Color field painting.

The color field painting movement was formed in the 1940s through independent attempts by Clyfford Still, Barnett Newman, and Mark Rothko to create an art form not only separate from the chaos following the carnage of World War II, but eternal.

For them, the most important elements in a painting were line, shape, and color. Especially that last one. Everything else was secondary. Large swaths of color were painted from one end of the canvas. Did we mention some of these canvases could reach seven feet tall? That’s taller than most basketball players nowadays!

Color field painting’s first generation was very intent on being expressive or evoke expressiveness. Rothko more than the rest wanted to use color to make people feel some type of way upon viewing his work. As the man himself said, “I paint big to be intimate.” Interestingly, Rothko never considered himself a “color field painter.” Still used palette knives instead of brushes to bring about texture in his work. Out of the original Three Amigos, Newman was the odd one out, favoring large swaths of color broken only by bright lines he called “zips.” 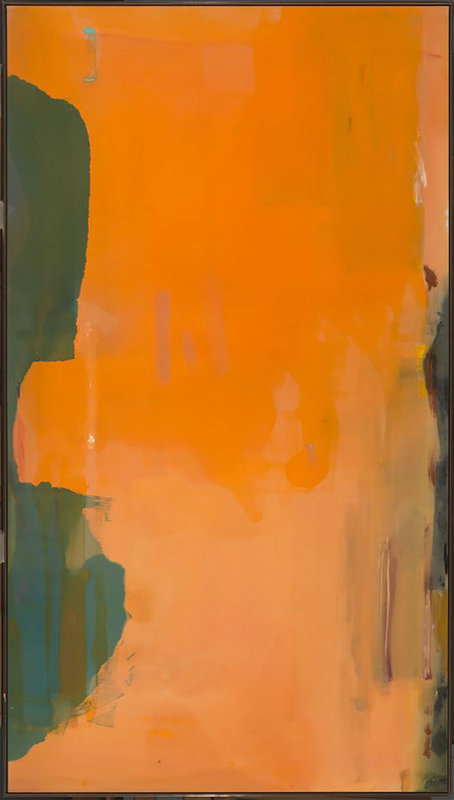 Crusades by Helen Frankenthaler at the de Young Museum

Then came along a certain Helen Frankenthaler, who decided that painting color onto the canvas was child’s play and one-upped the men by soaking her canvases in pigment. Paint was no longer separate from the canvas, but instead, one with it.

Thus started the second generation of color field painters, coined as “post-painterly abstraction” by Clement Greenberg, an art critic responsible for bringing the Abstract Expressionists to stardom, in the 1950s. He was also married to Frankenthaler, which may have been a factor in his endorsement of the movement.

These color field painters were less interested in the expressions color could evoke, but more so in how the color could be expressed on canvas. The first thing they did away with: brushstrokes. It was to remove any trace of subjectivity from their work. 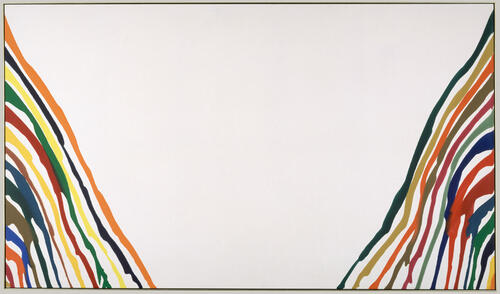 Alpha-Pi by Morris Louis at the Met

Morris Louis followed Frankenthaler's canvas soaking methods and also carefully poured lines of paint down his canvas to achieve a rainbow effect on his works.

Kenneth Noland’s shtick was target symbols, with every ring a different color so as to explore the relationships between the different hues, shades, and tints.

By the 1960s, the color field movement had died down considerably due to it splintering into numerous groups. In its place rose Minimalism, the reason why in the modern day, most of your city-dwelling friends are into Ikea, Everlane, and fashion bloggers who dress exclusively in monochrome and neutrals.