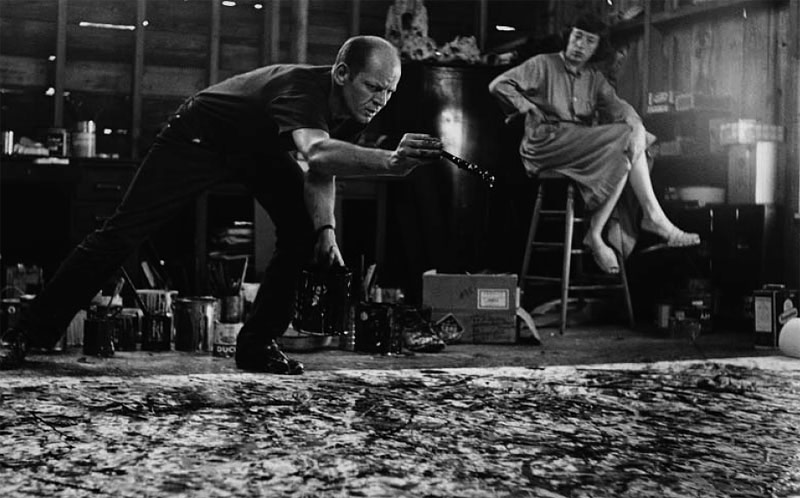 The United States in the 1940s and 1950s must not have been a fun time to be a developing artist – the art made during this era tells us it was a very tense and moody time to be alive. The world had witnessed a second, even more devastating World War, and the United States was trying to figure out how to deal with becoming a superpower. Hope, anxiety, and fear all swirled into one huge storm of feelings that artists just had to get out of their hearts and onto their canvases, whether through angry gestural drips or calming color fields.

Lucky for us, all of these feels inspired Abstract Expressionism: an art movement that changed the course of Western art history forever. Abstract Expressionists, or the New York School as they also liked to call themselves, pushed the boundaries of what could be considered “acceptable” for art, in terms of style, subject matter, and approach. Although Peggy Guggenheim is credited with introducing the world to the brooding, artistic genius of Jackson Pollock, Piet Mondrian also deserves a shout out. If it had not been for him, Pollock might have lived out the rest of his days as a maintenance guy at the Museum of Non-Objective Art – the older and less snazzy name for the Solomon R. Guggenheim Museum – rather than an artist with work in the museum’s collection. 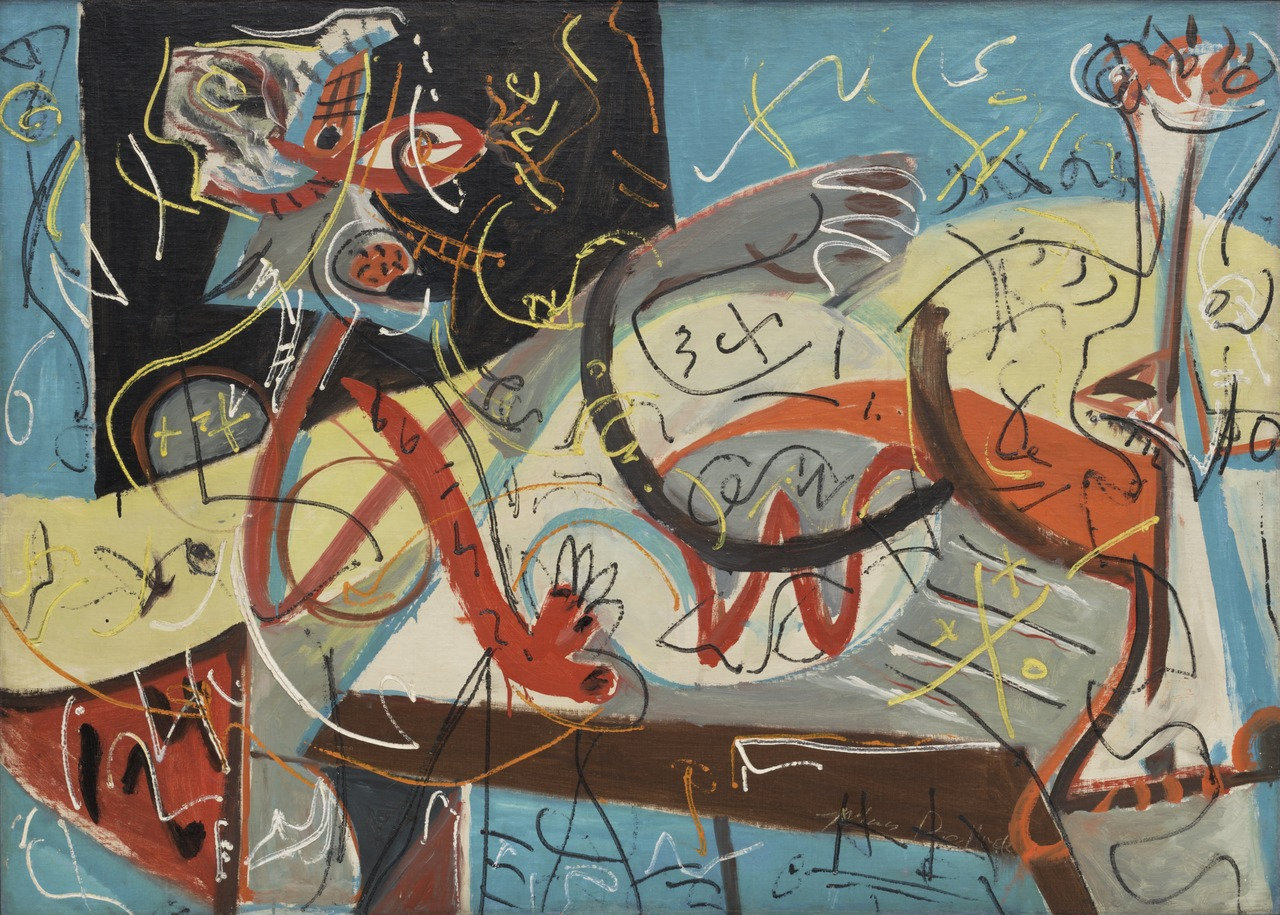 Stenographic Figure by Jackson Pollock at the Museum of Modern Art

Mondrian, who served as Peggy Guggenheim’s art adviser in her early collecting days, pointed out Stenographic Figure and reportedly said, “You should keep an eye on this man.” Pollock’s unrecognizable forms and squiggles apparently struck a nerve with the hardlined, geometric artist, and the love for action painting was born. Pollock’s style quickly evolved into the drips and splatters that you probably either love or hate.

One: Number 31, 1950 by Jackson Pollock at the Museum of Modern Art

Pollock is a BFD because he was the first artist to utilize new formal techniques to depict a collective unconscious, or the fancy term for the many, complex feelings that Americans were all sharing during this trying time. European modernism would no longer do; after all, what did they know about representing the tortured, American psyche? Surly, masculine, and mysterious (complete with a story describing his upbringing in the American West that reached mythic proportions), Pollock perfectly fit the bill.

Pollock’s wildly new paintings established that the artist’s gesture was all the content that you needed to make great paintings; the gesture became the mark that directly represented the artist’s involvement with and physical presence inside the work. During a very existential and angsty time, artists found comfort in the idea that that they could create personal meaning through their own actions. Pollock might have been one of the first artists to paint in this new style, but by no means was he the only one to explore the gesture. Despite getting way less street cred than her husband, Pollock’s wife Lee Krasner also created the types of all-over compositions associated with action painting. 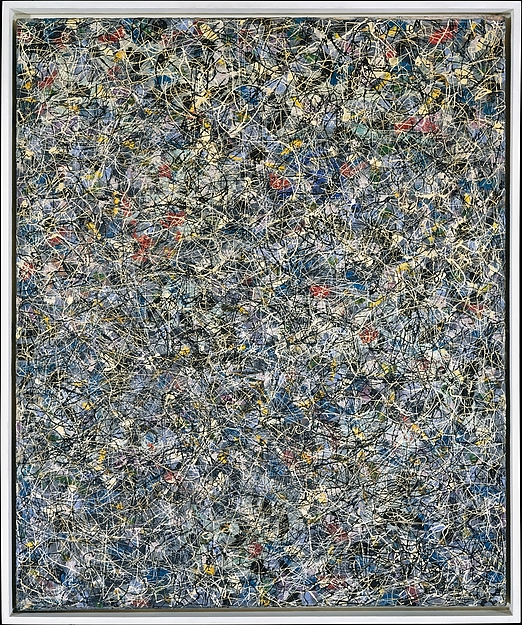 Untitled by Lee Krasner at The Metropolitan Museum of Art

Although much less well-known than her hubby, Lee Krasner was on the scene way before Pollock ever was. She even studied with the illustrious German artist Hans Hofmann, who helped bring some of that European modernist flavor, which had been developing for a little over half a century, to the United States. Her early career was extremely promising, but as some know all too well, meeting a certain type of man can lead to one’s downfall. Pollock was a force to be reckoned with, and Lee got wrapped up in the meteoric rise of his artistic career.

But Pollock wasn’t the only strong, male presence in the New York painting game during this time. Willem de Kooning was another artist who, in addition to being a total hunk, was also invested in the gestural nature of painting. 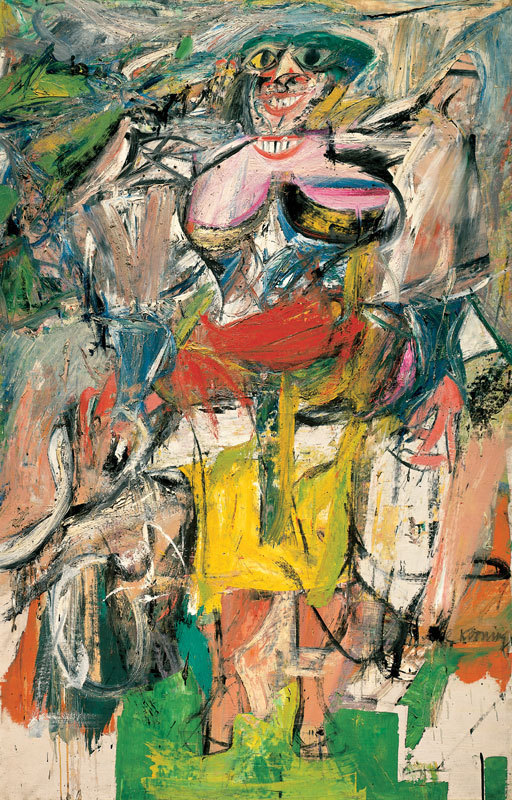 It almost seems like de Kooning’s goal was to make viewers feel as if they were going crazy when looking at the paintings from his Woman series. And yet, famed art critic Clement Greenberg loved his work, which by the way totally pissed off Jackson Pollock. I guess Pollock was mad that there could be more than one Abstract Expressionist “it” boy.

Although de Kooning’s work contains the same ode to the artistic gesture, de Kooning also returns to a semblance of figurative representation. In doing so, de Kooning asserts that his subjectivity – his personal interpretation of experience – is just as valid as the hundreds of years of art history that centered around the female figure. What resulted was a bunch of grotesque women that are enough to make you think, “WTF?” When critics finally asked what was up with these frightening women, de Kooning claimed that they blossomed from his own feminine side. Nice save. 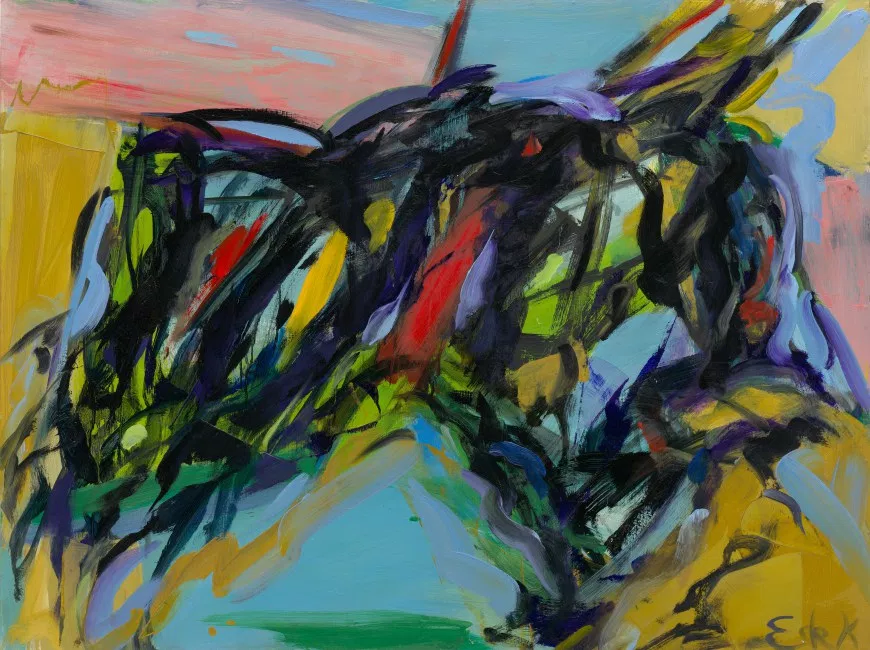 To run in a circle dominated by men like Pollock and de Kooning, women had to be tough, and Elaine de Kooning was no exception. A New York art socialite, Elaine more than kept up with all of the the painting, writing, discussing art theory and philosophy, and even drinking that was going on then. Her own gestural work, which even sneaks its way into the many portraits that she loved to paint, is evidence of her unique approach.

The gestural, action artists were only one side of Abstract Expressionism. Now for the supremely chilled-out Color Field painters, who sought to produce simple images that would convey complex thoughts. These thoughts were similar to the same existential anxieties that the action painters were dealing with; they just had a different approach to the process of doing so. Color Field painters believed that they could evoke the sublime – extreme feelings in the viewer – just by arranging colors on a canvas. 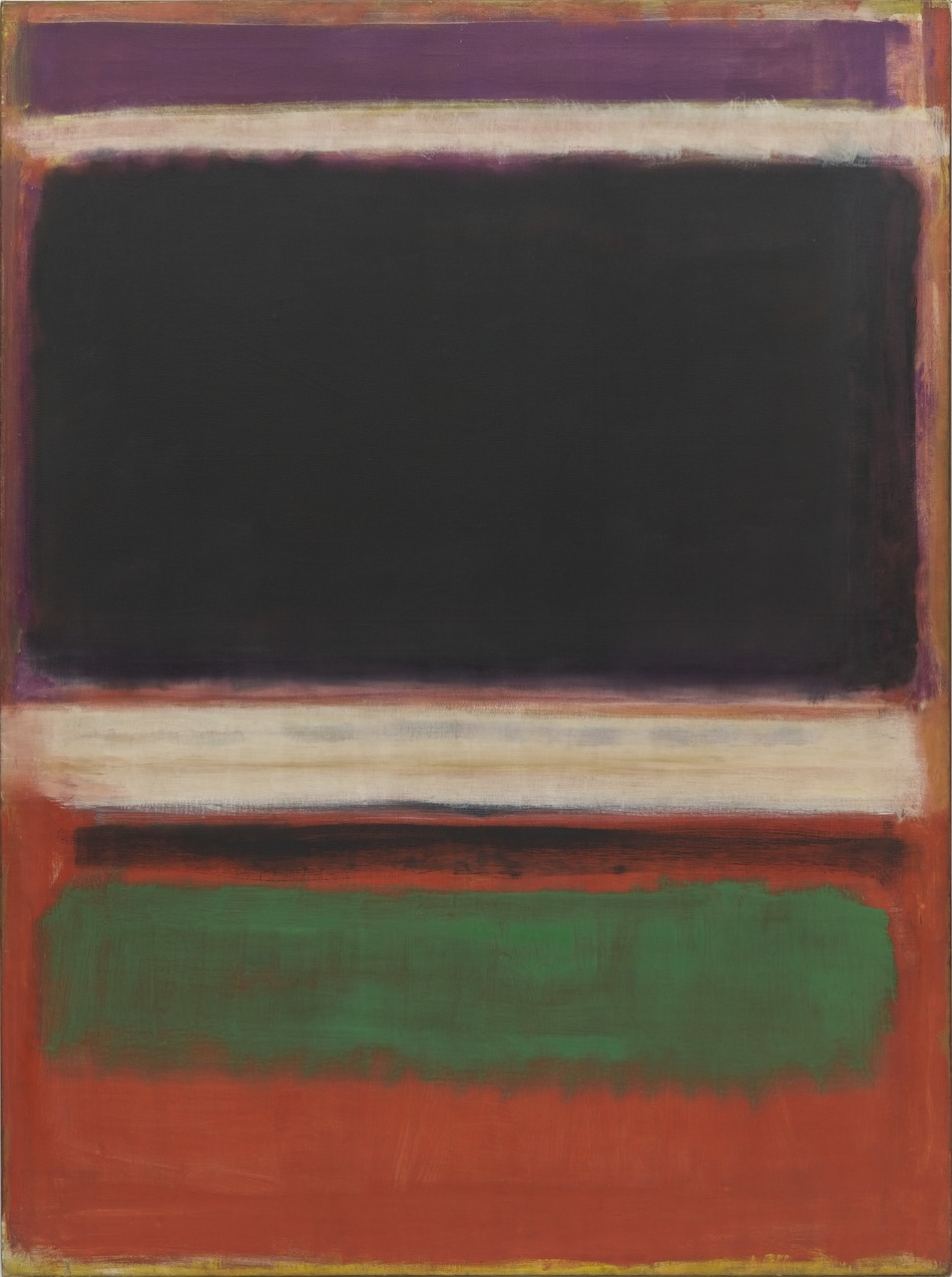 For Rothko, it’s hip to be square, and his floating squares have become his signature mark. Rothko was devoted to the expressive properties inherent to each color, and he felt that placing colors together on a canvas would evoke a spiritual experience by tapping into the subconscious. Rather than expressing his own subjectivity, Rothko’s goal was to facilitate a subjective experience for each viewer. Barnett Newman, on the other hand, was more of a long, thin rectangle kinda guy.

Before becoming an artist, Newman was a curator and lecturer, and he definitely fancied himself to be a philosopher of sorts. After he made his first signature “zip” (the name for those stripes on the red canvas), he was so blown away that he had to think about what it meant for the next eight months

So Barnett did what any normal person would do: continue painting zips and only zips. Each of his paintings are vast fields of a single color split apart by zips of varying colors, and Vir Heroicus Sublimis is probably the most famous one. The large, enveloping canvas encourages viewers to look inward to discover their own truths and take comfort in their subjective experience and interpretation of the work. 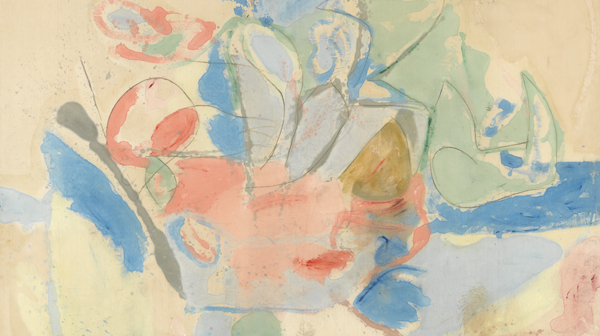 Helen Frankenthaler was an artist who straddled the methods of action and color field painting. She introduced a technique of using thinned paint to stain raw canvas, and she experimented with varying paint consistencies to achieve different effects. She also dated the aforementioned famous and extremely important art critic Clement Greenberg, which also probably helped her career. Whereas artists like Rothko and Barnett hid the canvas underneath extremely even coats of paint, Frankenthaler integrates the patches of raw canvas into her works. Unlike the other Abstract Expressionists delving deep into the subconscious, she turned to the natural landscape as a valid source of inspiration.

Abstract Expressionism was important because, for the first time, the United States (New York specifically) was the center of new and internationally-known art production. No longer were the French the ones who reigned supreme in terms of modernism. In addition to other artists like Clyfford Still, Franz Kline, Robert Motherwell, Mark Tobey, David Smith, and many others, we have all these fine ladies and gents to thank for that.