How much do you know about Modernism? Take our quiz! 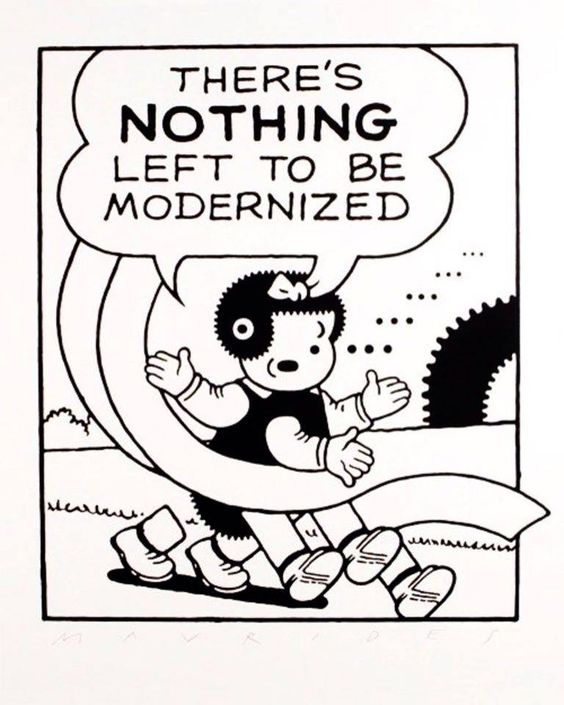 “Modern Art” refers to the stylistic changes of progressive art movements beginning around the 1860s and going until around the 1960s, when we begin to refer to art as “Contemporary.” As you might imagine with such a long timeline, within the umbrella of “modernism” there are many different art movements with specific, differing points of view, often with one movement inspiring the next. What they have in common is a rejection of existing artistic traditions, a focus on the materials used in favor of narrative, and a trend towards abstraction, as opposed to representational images.

Modern art is experimental and innovative, as artists respond creatively to a world that is quickly changing all around them, whether due to war, the advent of different technologies, or new ideas in philosophy and theory. In this reader we will work our way chronologically through all the “-isms” that, as a whole, constitute what we refer to as Modern art. 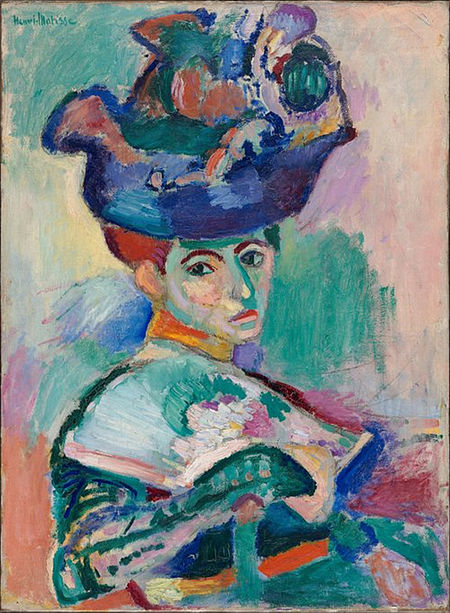 Woman with a Hat by Henri Matisse

As with the Impressionists, the Fauvists got their name from a critic, Louis Vauxcelles, who was being derisive about their work. ‘Fauves’ means ‘wild beasts’ in French, and he was referring to the bright, unnaturalistic colors and abstracted forms that seemed positively uncivilized to the traditional art establishment at the Salon. Fauve art emphasizes vivid hues, flat planes of color, and expressive, painterly brushstrokes, taking cues from Post-Impressionist work and pushing those strategies even farther from the representational painting of the past.

Andre Derain - Co-founder of the movement 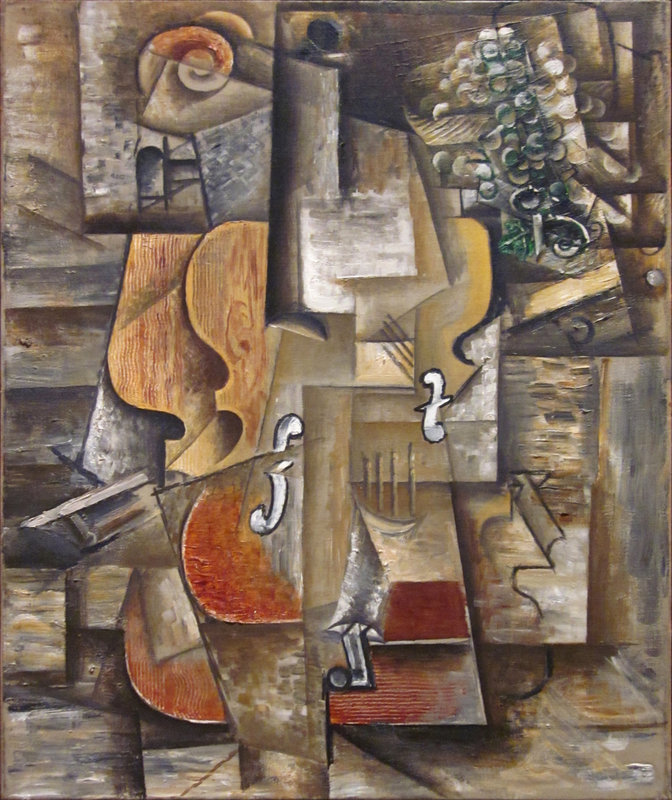 Violin and Grapes by Pablo Picasso

Considered one of the most influential modernist art movements, Cubism was a style defined by using geometric shapes and multiple perspectives to make subject matter appear fragmented, abstracted, or in motion. Pablo Picasso and Georges Braque are credited with inventing the Cubist style in Paris where it flourished during the 1910s and subsequently inspired many other “-isms” across Europe.

Our friend Louis Vauxcelles from Fauvism coined the term Cubist as well, once again whilst attempting to critique the style. He wrote that the group of artists were “ignorant geometers, reducing the human body, the site, to pallid cubes.” One interesting theory that has been presented more recently by art historians is that Picasso and Braque were heavily influenced by the invention of cinema, which allowed the artists to see moving images for the first time.

Jean Metzinger- Co-authored the first major text on the subject, “Du Cubisme” in 1912 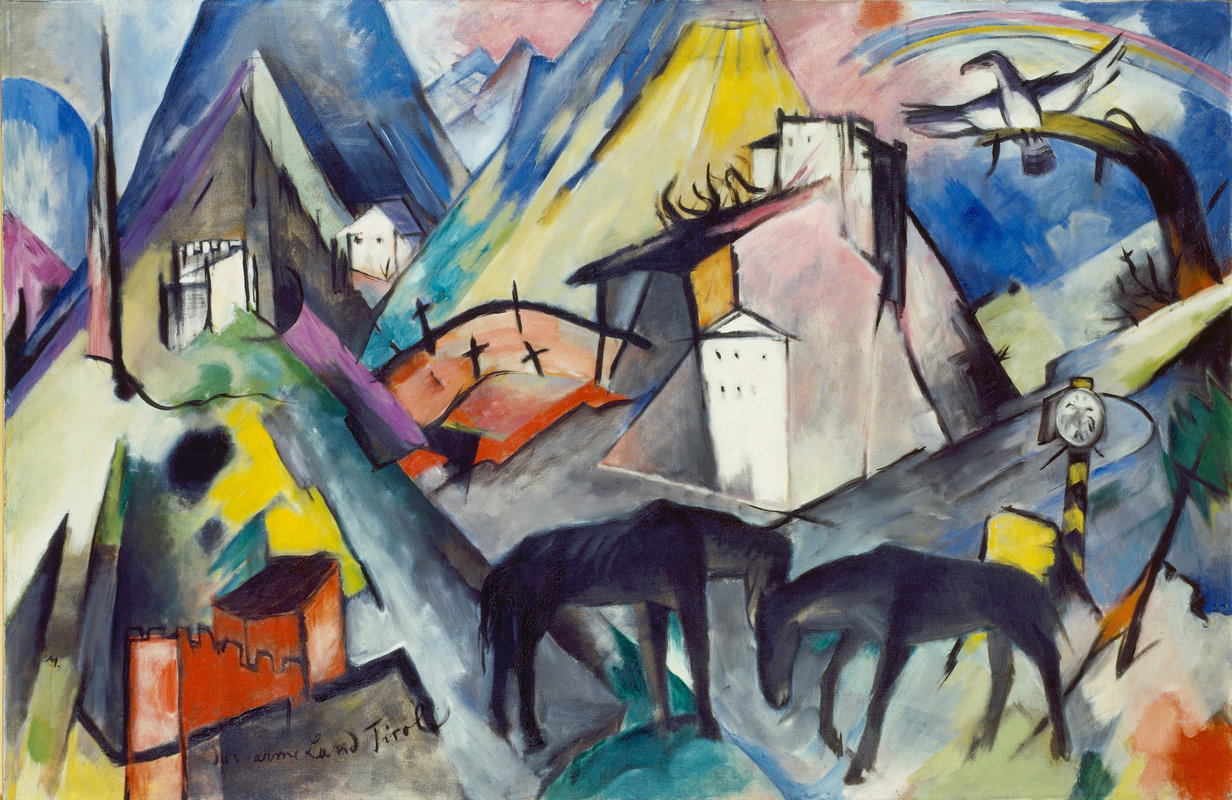 The Unfortunate Land of Tyrol by Franz Marc

A movement not entirely dissimilar to Fauvism, German Expressionist art conveys the unique emotions of the individual artist, and rejects realism in favor of bold, clashing colors, distorted shapes, and strong brushstrokes. With this emphasis on the innermost creative expression of the individual, Expressionist art is stylistically varied and as such can be difficult to define. However, the impetus for the beginning of Expressionism in Germany can be mainly understood as artists reacting to Germany's loss in World War I, after which they became disillusioned with their government and with the normative expectations of bourgeois society that no longer seemed relevant.

There are two main camps: the first beginning in 1905 in Dresden and led by Ernst Ludvig Kirchner was called Die Brücke, which means ‘The Bridge’, as a reference to the movement’s interest in leading art in a new direction. In Munich, between 1911-1914, Wassily Kandinsky, Franz Marc and Gabriele Münter joined together to form Der Blaue Reiter, or ‘The Blue Rider’, named after Marc’s affinity for horses and a feeling of spiritual connection Kandinsky had for the color blue. Both groups were inspired by a desire to express the subconscious, an idea that pops up in many modernist art movements after the publication of Sigmund Freud’s “The Interpretation of Dreams” in 1900. 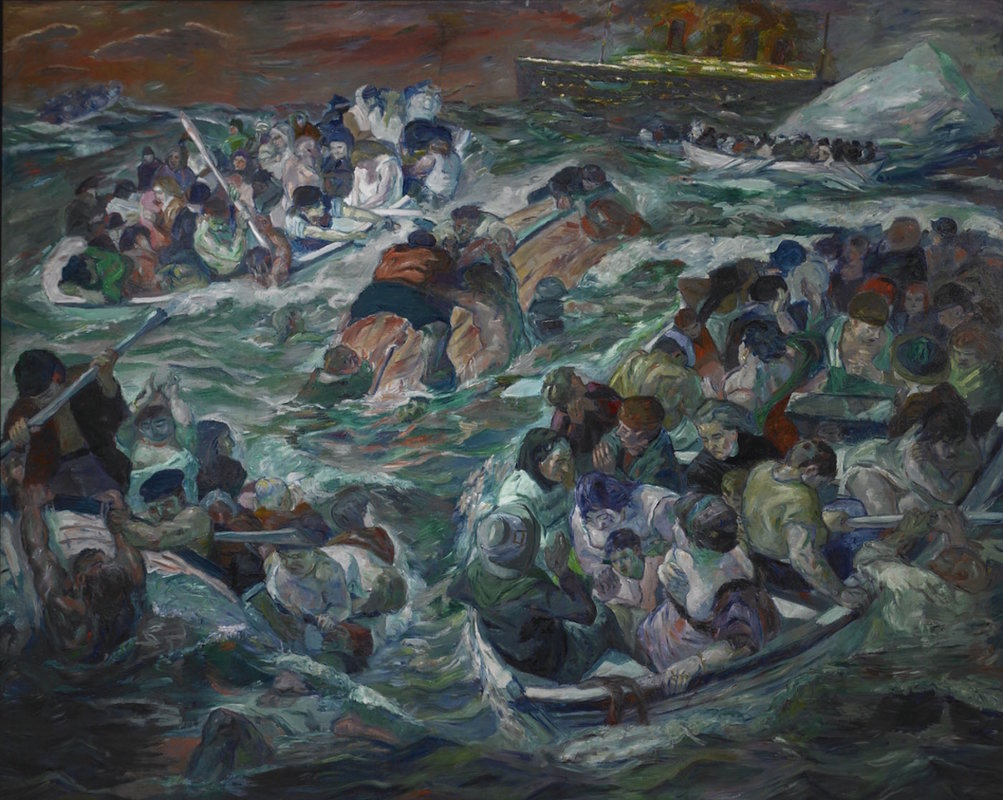 Later on, in 1920s Weimar, artists like Max Beckmann and Otto Dix took the movement to a darker place as they reflected on the horrific violence, loss and poverty brought on by the war. They pointedly rejected the term “Expressionism,” as they believed the work of those artists was too dreamy and romantic, and did not reflect the realities of post-war society. They called their group “New Objectivity” and their work was more representational, overtly political, melancholy, and haunting, though it still made use of gestural brushstrokes and unrealistic colors. 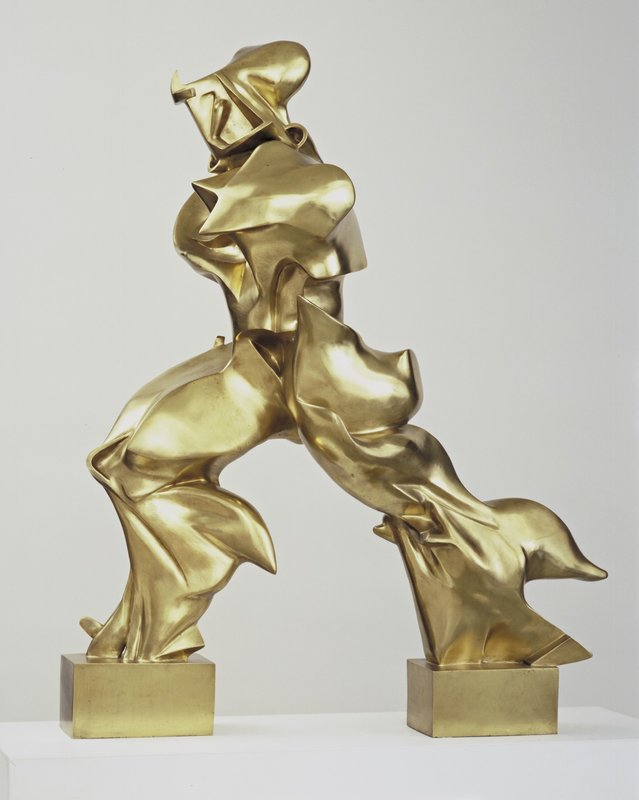 Unique Forms of Continuity in Space by Umberto Boccioni

The interest in technology and movement that influenced Cubism was thoroughly embraced by the Futurists shortly thereafter. The Futurist movement was started by Italian poet Filippo Marinetti who published his “Manifesto of Futurism” in 1909, which basically rejected everything old and traditional in favor of youth, new technologies and industrialization. While Cubist paintings often depict domestic still lifes, Italian Futurist art shows us urban city scenes with fast cars, trains and airplanes. There is a frenetic dynamism and trend towards bold colors that appear in Futurist art which differentiates it from its quieter, more muted predecessor. The artists utilized “lines of force” to indicate directional movement, expressing the Futurist belief that the world is always in motion, and their desire to make forward progress. 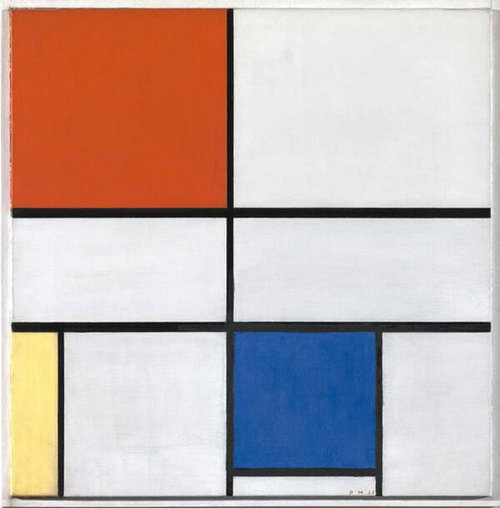 Dutch for “The Style,” and also referred to as Neoplasticism, De Stijl was a marriage of art and architecture founded in the Netherlands in 1913. De Stijl painters advocated for pure abstraction, using only black, white, and primary colors. You’ll see fairly simple compositions of geometric shapes, intersecting straight lines, and the juxtaposition of positive and negative space. Artists working in this style believed that through the mathematics of ideal geometry they could access the core truths of reality on a spiritual level. Founded by Kazimir Malevich around 1913, Suprematism is a Russian art movement that distills the themes we’ve discussed in previous movements down to bare bones: simple squares and circles in a limited range of colors. The name refers to “the supremacy of pure artistic feeling,” which is prioritized in this movement over any attempt to visually depict real people and objects. This is the first time we see an artist proclaiming boldly that art is enough in itself, and does not need to be representational, or functional in its storytelling. Malevich’s 1915 Black Square was revolutionary in this insistence on “art for art’s sake,” and it plants the seed for subsequent art movements like Abstract Expressionism and Minimalism, which would not pop up until decades after its creation. It’s also probably the first time someone saw a work of art and said “Hey, my kid could do that!”

Kazimir Malevich - Suprematism was his brainchild 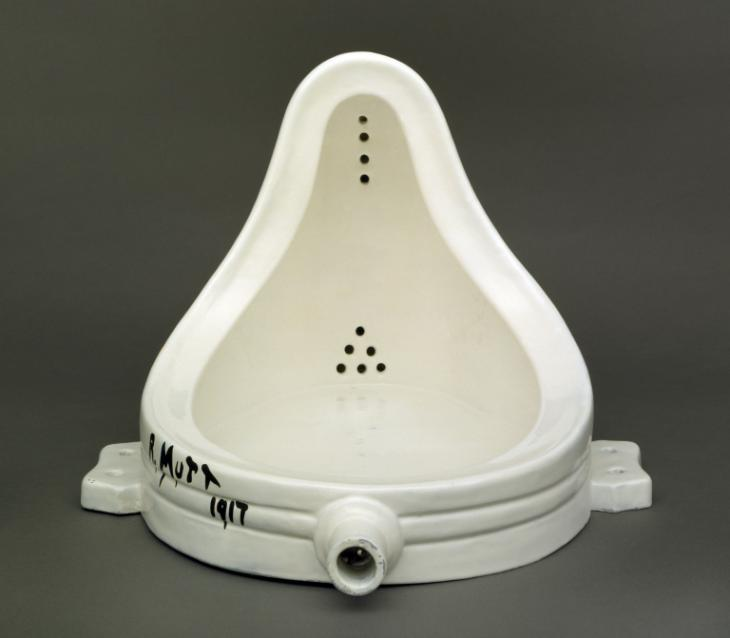 Another avant-garde movement spurred by reactions against the horrors of war is Dada. Dada artists witnessed the collapse of society during WW1, and decided that any culture that could allow such violence and destruction must be destroyed itself, along with its artistic traditions. If the so-called reason and logic of capitalist interests lead to world wars, Dada artists would embrace irrationality and intuition. In a way, Dada art is a type of “anti-art,” questioning the definition of art itself, and using it as a tool to critique rigid existing traditions of both art and society. It is often nonsensical, humorous, satirical, and was definitely controversial.

There are several theories on how Dada got its name, but one story in particular captures the spirit of the movement - one evening at a group meeting, a knife was stabbed at a random page of a French dictionary, and “dada” is where it landed. Artistic techniques and styles in Dada are varied, but there are some recurring themes. Collage was a favorite; inspired by Cubism, items from everyday life like newspapers and train tickets, symbols for modern society, were cut up and rearranged. Photomontage, the act of slicing up photographic images and juxtaposing them with others, is a similar exercise in destruction and reimagination. The element of chance was often used, as in the knife story, as the Dadaists embraced randomness and chaos. Found objects presented as art, what Marcel Duchamp called “Readymades,” particularly shocked and appalled audiences. Fountain, a urinal Duchamp signed and turned upside down before submitting it as an artwork to an exhibition, would become an infamous symbol of the movement and encapsulates the childish humor the trickster Dadaists often relished, as well as their desire to turn the world upside down, so to speak.

Marcel Duchamp - Granddad of contemporary art. Insisted art could be conceptual, rather than simply visual.

Baroness Elsa von Freytag-Loringhoven - Eccentric female German avant-garde artist and poet. May have actually been the one who created Fountain. 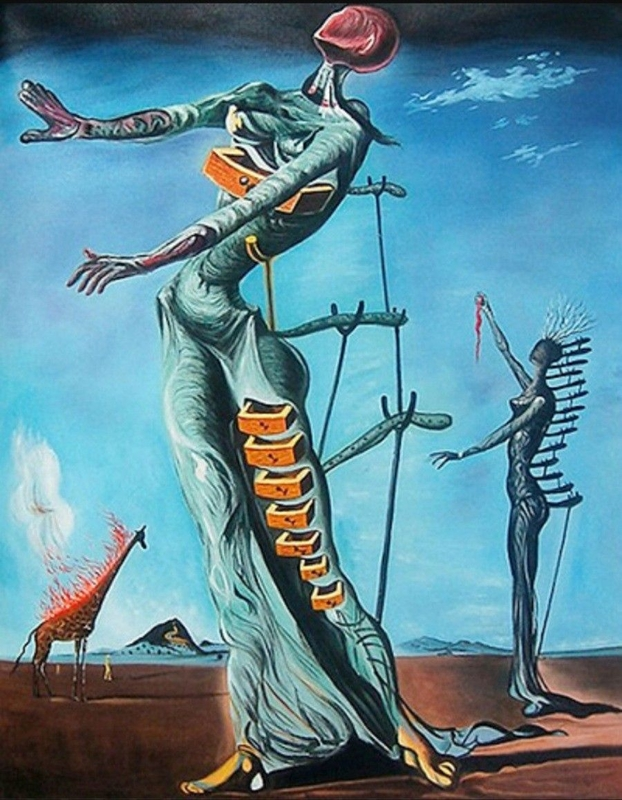 The Burning Giraffe by Salvador Dali

Many artists associated with the Dada movement were also associated with Surrealism, which came directly after. Surrealists were also disillusioned by the structures of society that they found oppressive, however the way in which they went about expressing their discontent with the status quo was visually and philosophically quite different. They believed that the key to social revolution was in allowing your mind to relinquish itself from logic and reason. Instead, they would attempt to let pictures and words flow freely from them without interference, in a process called “psychic automatism.” To this end, Surrealism was heavily influenced by Sigmund Freud’s theories on psychoanalysis: free association, accessing the unconscious mind, and dreams. Like in Freud’s writing, hidden desires and sexuality loom large in Surrealist work.

Because of this emphasis on the subliminal mind and the imagination, Surrealist art is really weird. Every artist has their own style, but Surrealist artwork is commonly outlandish, irrational, and uncanny. Think: a furry teacup, melting clocks, or a train shooting out of a fireplace. The term Surrealism, after all, comes from the French “beyond reality.” 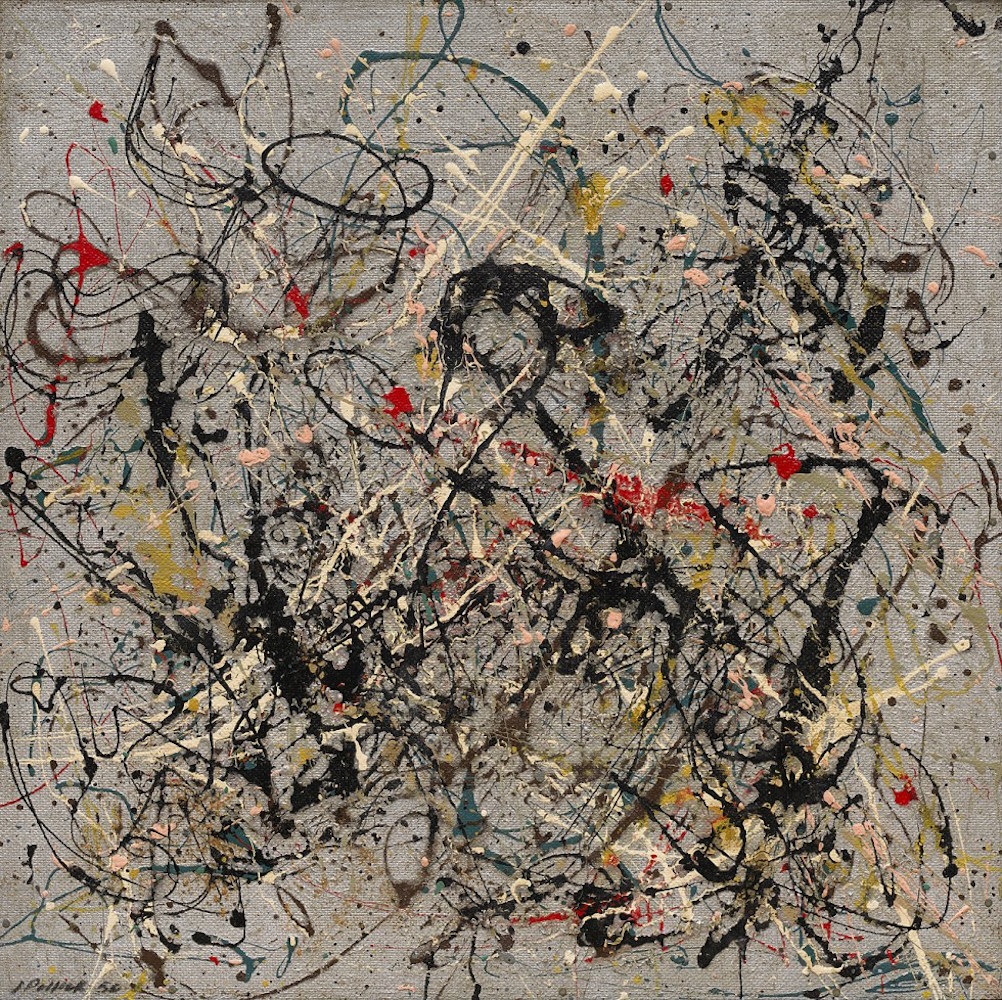 Political instability in Europe leading up to and during World War II brought many of the European Surrealists across the pond to New York City. Their desire to mine the unconscious mind and express their personal truths on canvas inspired a generation of American artists to make a body of work in the 1940s and ‘50s that we now call Abstract Expressionism. Many of these artists were able to pursue a career in painting largely in part due to funding and support from Franklin D. Roosevelt’s Works Progress Administration (WPA) program, which was started to create jobs after the Great Depression.

Abstract Expressionism rejects representational imagery completely, and instead focuses on conveying feeling through color, form, and texture. The movement is marked by an interest in eschewing the formal conventions of painting; they dreamt up novel ways to apply paint on the canvas, experimented with spontaneous mark making, and let loose with gestural brushstrokes. For these artists, the process of making was as important, if not more, than the final result.

The first uniquely American avant-garde movement, Abstract Expressionism champions individuality and bold statements, as seen in the diversity of artistic styles within the movement and the monumental scale at which these artists worked. Action painting is probably the most famous innovation of the movement, with Jackson Pollock at its helm. Pollock’s radical new technique of pouring and dripping paint onto an unprimed canvas laid out on the ground was particularly shocking. Later in the 1950s, the movement matured into Color Field painting, in which large swathes of singular colors were meant to give the viewer an experience of the ‘sublime,’ or infinite and unknowable greatness, and intense emotion.

This reader is part of a larger series of introductory texts about art and art history. Each has been written under the direction of Rick Love. This reader was co-authored by Angelica Jardini.

I remember having to write an essay on a painting by Salvador Dali, The Blazing Giraffe. I stayed up several nights and worked on it. Turns out that's not even the title https://www.sartle.com/artwork/the-burning-giraffe-salvador-dali