How much do you know about Impressionism? Take our quiz! 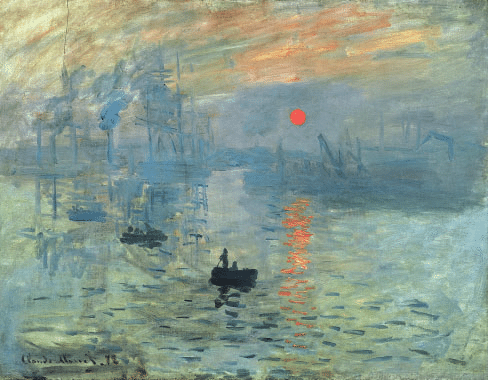 Impression, Sunrise by Claude Monet - the painting that changed it all.

What if you didn’t have to render a landscape in painstaking, accurate detail to get your point across? What if, in fact, a looser, more expressive style captured the feeling of a place better than a super realistic scene? These were the questions buzzing around the heads of young artists in Paris at the turn of the 20th century (or fin de siecle if you’re French/fancy.)

It all began with the painting you see above. “Plein-air” painting (painting done outside) was gaining popularity as an art form. With the invention of premixed paint in tubes, paint no longer needed to be laboriously ground up and made by apprentices inside the studio, and the tubes were more easily portable than their glass predecessors. Practically speaking, paintings made in this way have to be done quickly, lest you lose the perfect light or that charming sailboat floats away out of sight. Monet, recognizing that this work didn’t really show the reality of the Port of Le Havre, where the river Seine meets the English Channel (after all, most of the image consists of cloudy gray haze), submitted it to the salon without naming the location and instead choosing the title Impression, Sunrise. And it was a fitting title, because that beautiful orange reflection of sunlight on the water, inferred simply by a few short brush strokes, represents exactly what Impressionism was all about: light, movement, and the paint itself. Monet didn’t need more than those simple blue streaks to make us feel the pulsing of the waves, or the bits of white added to the orange to show us how the sunlight glittered across their surface, warming the cold and foggy morning. In short, you can think of Impressionism as the art of capturing a moment.

As often happens when presented with a new style, stuffy critics were shocked and appalled by this departure from academic painting. Louis Leroy wrote a scathing piece in a satirical magazine, poking fun at the paintings he saw as unfinished and sketchy, and sarcastically calling the modern artists he thought unskilled the “Impressionists.” The group of independent artists embraced the name, making it so that in trying to roast the new style, Leroy inadvertently coined the term for one of the most important movements in modern art history.

Impressionism is so important because it opened the door for artists to be innovative with the way they created art. They focused on the texture of the paint itself, leaving the gesture of the brushstroke visible, and were bold in their selection and use of colors. Their paintings evoke emotion, rather than meticulous detail, and emphasize contemporary subject matter. You won’t see any historical events, Greek gods, or royal portraits in Impressionism. Instead, landscapes, leisure activities, and snapshots of urban life were all the rage.

This insistence on portraying the beauty of everyday life was largely the result of the industrialization happening in France at the time. For instance, newly constructed railway lines meant that Parisians could more easily escape to the countryside, which they did in droves every weekend to sail boats, have parties, and drink at outdoor cafes - all motifs you will see repeated in Impressionist art.

Paris itself was also modernizing. Between 1853 and 1870 Paris was completely renovated under Emperor Napoleon III, who ordered the small and winding ancient streets to be demolished and replaced by wide, open boulevards. The newly spacious streets allowed for more freely flowing commerce, and the increase in public spaces like promenades, parks, and plazas meant that people of all classes were mingling outside to enjoy their shiny new surroundings. This gave the Impressionists lots of fresh subject matter to work with, and they were just as inspired by the weary faces of beggars and bohemian brothel scenes as they were the activities and fashions of wealthier circles.

Another important influence on the Impressionists came from ukiyo-e, or Japanese woodblock prints from Edo (modern Tokyo). Previously isolated from the Western world, a treaty signed in the mid-19th century opened the floodgates of Japanese art and culture to a European audience and Japanese imports became incredibly popular. The term "Japonisme" was coined to describe European art that was inspired by the aesthetics of ukiyo-e, which include a flattening of spatial perspective, simple backgrounds without intricate detail, and bright colors. Claude Monet was particularly enamored with Japan, building a Japanese-style footbridge over the pond in his Asian-inspired garden that was home to his infamous water lilies.

Simply put, the Impressionists were directly inspired by the world around them. As Camille Pissarro once wrote: "But it would be a long trip indeed if one stopped at every attractive town or village, at every beautiful motif — although a painter could want nothing better than to be able to stop and then go on his way and always go on and stop."

Here are the major players of Impressionism:

This reader is part of a larger series of introductory texts about art and art history. Each has been written under the direction of Rick Love. This reader was co-authored by Angelica Jardini.