Rubens: The Early Years at the Legion of Honor

Okay, so maybe it’s not that kind of Rubens, but there are some similarities between this exhibition and a delicious Reuben sandwich. They both are glorious to behold, they both often contain significant amounts of fat, and spending a long time looking at either will make you really, really hungry.

The Legion of Honor’s latest show has been a long time in the making. Before he left the Fine Arts Museums of San Francisco to head the Met, former director Max Hollein helped set in motion this last exhibition, which he considered a final parting gift to the city. He’s long gone now, but what better way for his legacy to go out with a bang than with a show all about Rubens? Born out of a collaboration between Sasha Suda of the Art Gallery of Ontario and the Legion of Honor’s own Kirk Nickel, not only is this the first show dedicated exclusively to the Flemish Baroque master in the United States in ten years, it’s also the first one ever to focus entirely on the early part of Rubens’ career. 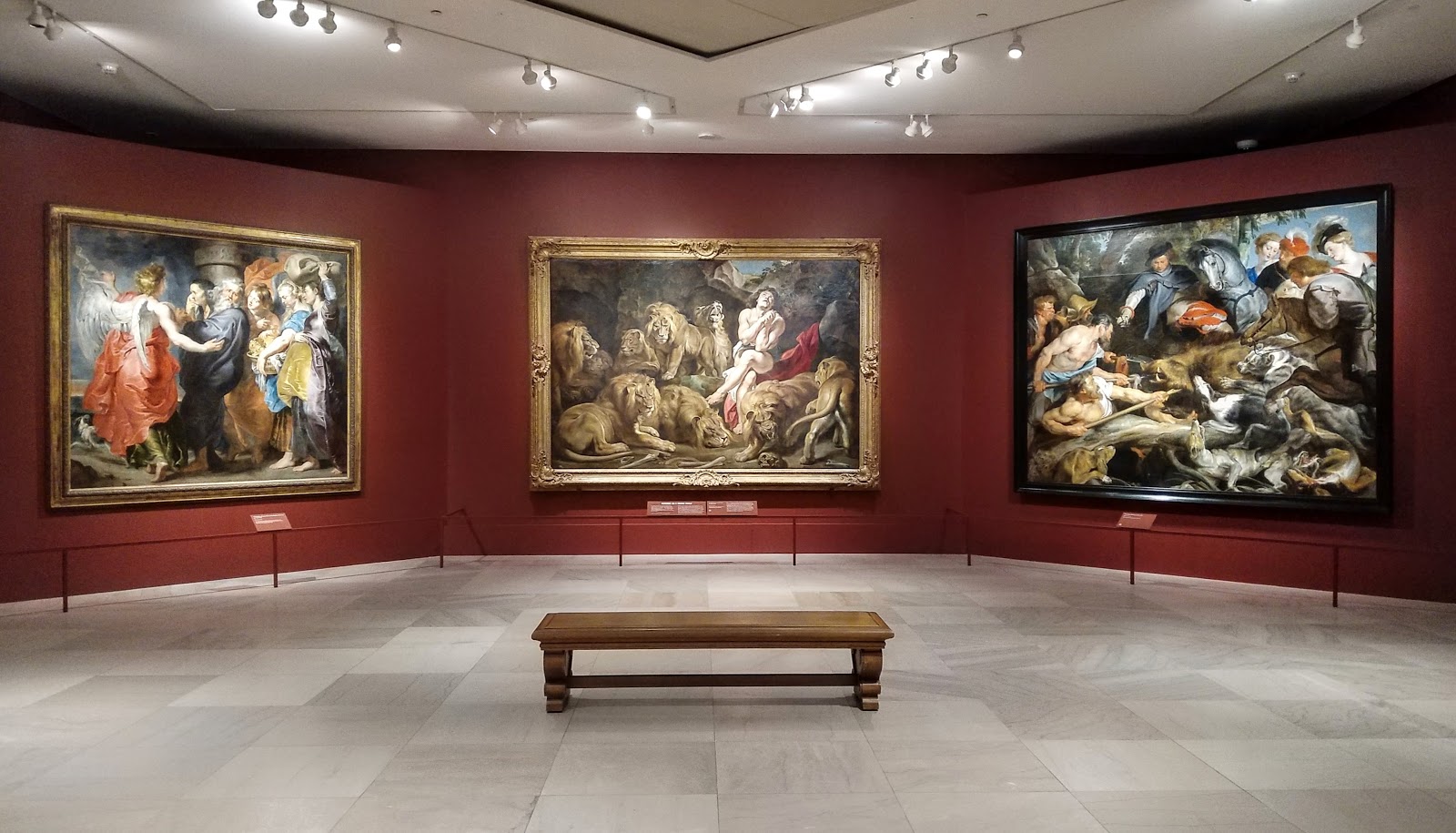 And his early development is just as fascinating as his mature work. The exhibit picks up when Rubens has already been named a master painter in Antwerp, but has put off opening his own studio until he’s traveled and learned at the feet of the Italian Renaissance masters. Ever precocious, Rubens quickly picked up work in Italy as a court painter to the Duke of Mantua, who exposed the classically educated Rubens to all sorts of Greek and Roman goodies, as well as supported his travels to see the work of Michelangelo, Leonardo, Titian, Veronese, and Caravaggio. Rubens absorbed aspects of all of these artists’ work into his own and then created something entirely new: a sensual, exuberant, and emotive style that appealed to the spiritual, intellectual, and courtly world to which he belonged as a true gentleman painter.

Some of the work he produced in Italy is here on display, including his first known self-portrait, which shows him among a group of what is likely his Northern European compatriots in Mantua, true courtiers à la the “Book of the Courtier” by Castiglione. 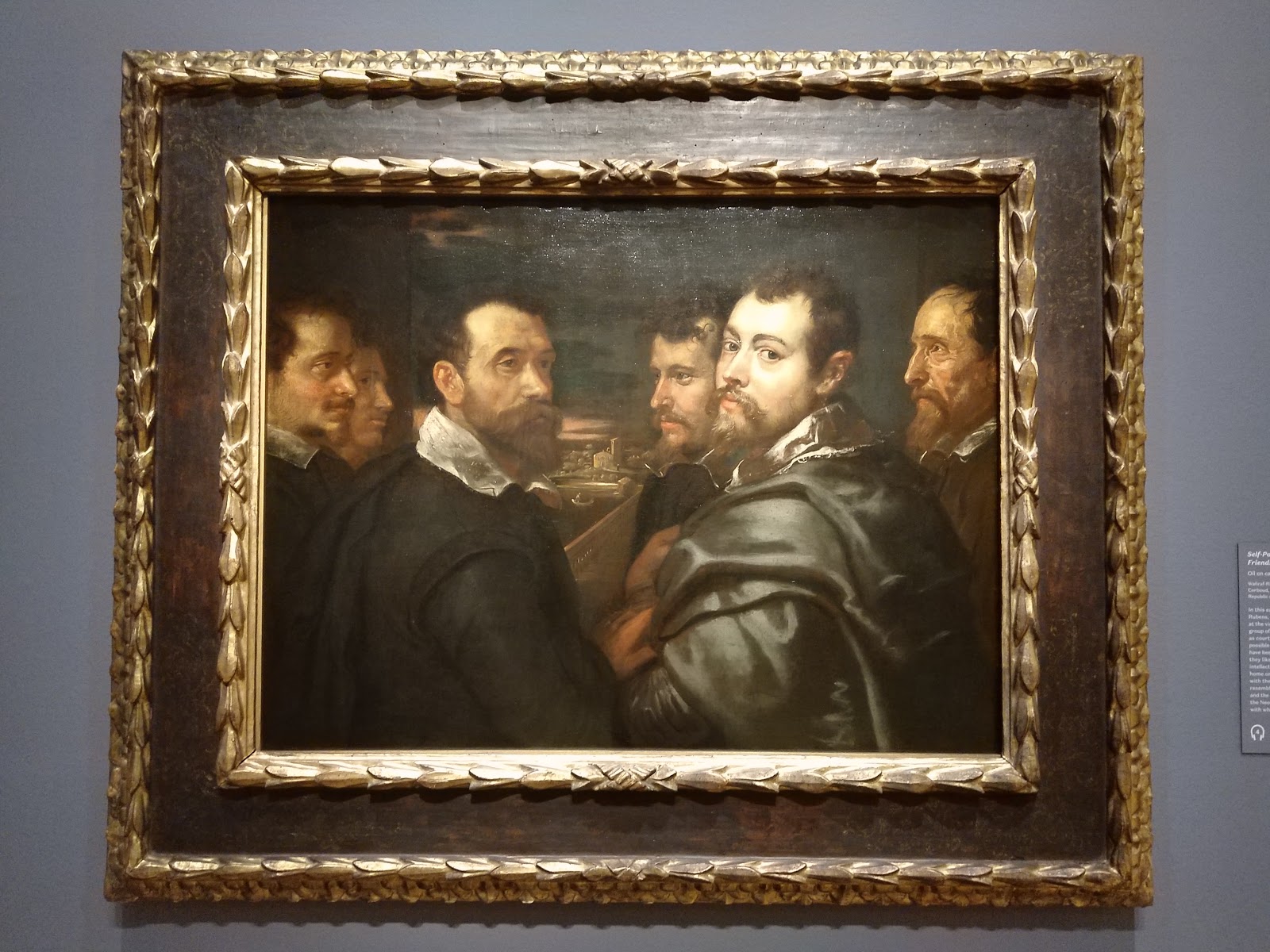 Self-Portrait in a Circle of Friends at Mantua. Wallraf-Richartz-Museum and Foundation, Cologne.

And just look at all that sprezzatura. That’s Rubens there in the front, looking extra ~sensual~.

Rubens returned to Antwerp in 1608 following his mother’s death, and he decided to stay and open a studio. Antwerp had already experienced its Golden Age by this point and had a severe economic slump during the religious wars that had been consuming that part of the world since the Reformation. His return coincided with the brokering of peace between the Hapsburg-controlled Southern Netherlands and the Dutch Republic to the North in the Twelve Years Truce, and Rubens felt now was the perfect time to help rebuild the city as a center of culture with his humanist friends. A selection of portraits on display demonstrate his range as he painted the prominent locals, from the formal portraits of city patricians with finely detailed, carefully controlled brushwork, to the loose, genial portraits of friends and family that offer revealing snapshots of their personalities.

While there’s no denying the brilliance of his portraits, this exhibit focuses far more on his history paintings, scenes inspired by biblical and mythological events, which are often very grand. The glory and drama of Baroque art had been ushered in in part by the decisions made by the Catholic Church during the Council of Trent, which established certain expectations for how religious art should look. In their effort to restore the majesty of the Church through art, they ruled that religious scenes must be depicted with accuracy, clarity, and emotional power. As a serious Roman Catholic, Rubens took the dictum and ran with it, creating powerful imagery that is easy to read yet profoundly moving. 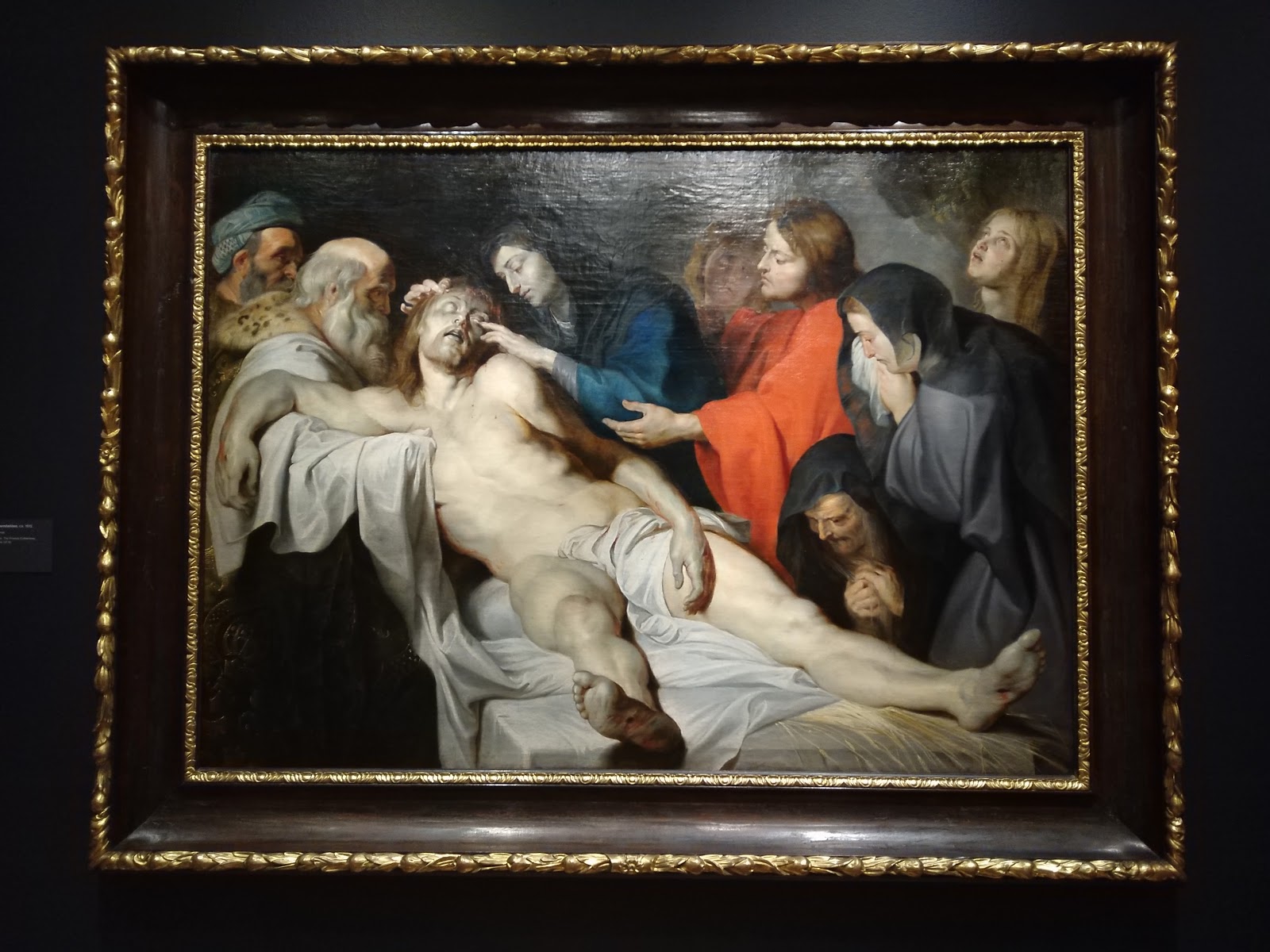 In the Lamentation, Rubens’ true genius is on display. Even in his most magnificent, large scale works, Rubens has a knack for zeroing in on a small moment, a tiny gesture, that was both emotionally potent and utterly relatable to the viewer. Here that moment is Mary tenderly closing her dead son’s eyes while plucking a thorn from his hair. These moments are so human, so visceral, that they allow the viewer to connect in new ways to the biblical figures of their adoration or study. Nobody had ever done this before to the same extent. Sometimes, like in The Holy Family with Saint Elizabeth, Saint John, and a Dove, he almost goes too far, humorously portraying baby Jesus fighting with baby John the Baptist over a dove (the embodiment of the Holy Spirit), John yanking feathers out of the poor bird’s wing. 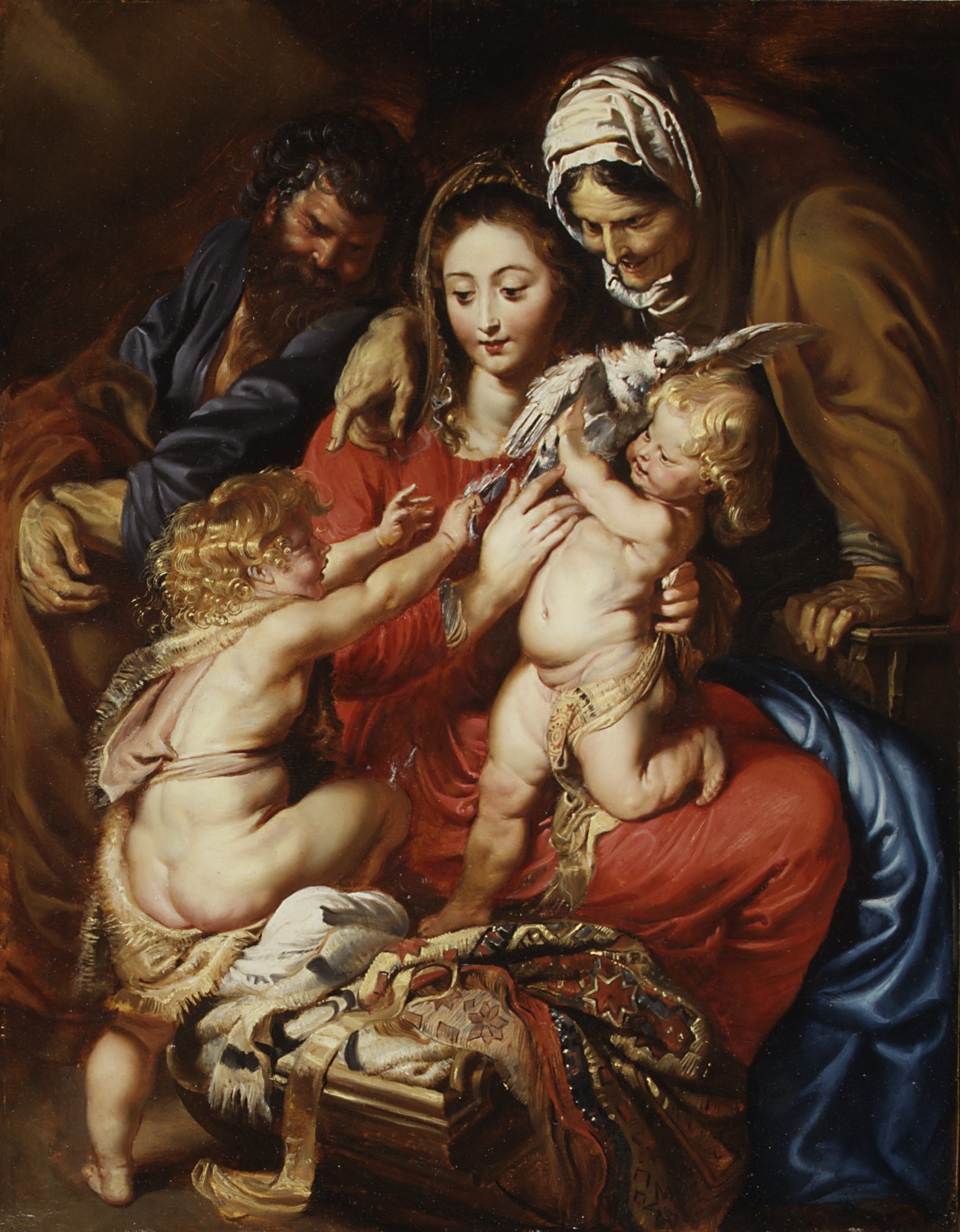 The Holy Family with Saint Elizabeth, Saint John, and a Dove. Metropolitan Museum of Art.

Looks like somebody’s losing their Holy Spirit privileges until they can learn how to play nice.

Even in the enormous and violent Massacre of the Innocents we find the same small moments of emotional force that give the entire work that signature Rubens pull. The desperate claw marks one mother makes in the face of her child’s attacker, the mother whose face is hidden in her hair as she bends over her dead infant’s blue body…. within the turmoil, those intimate gestures emerge to form an arresting picture of cruelty and grief. 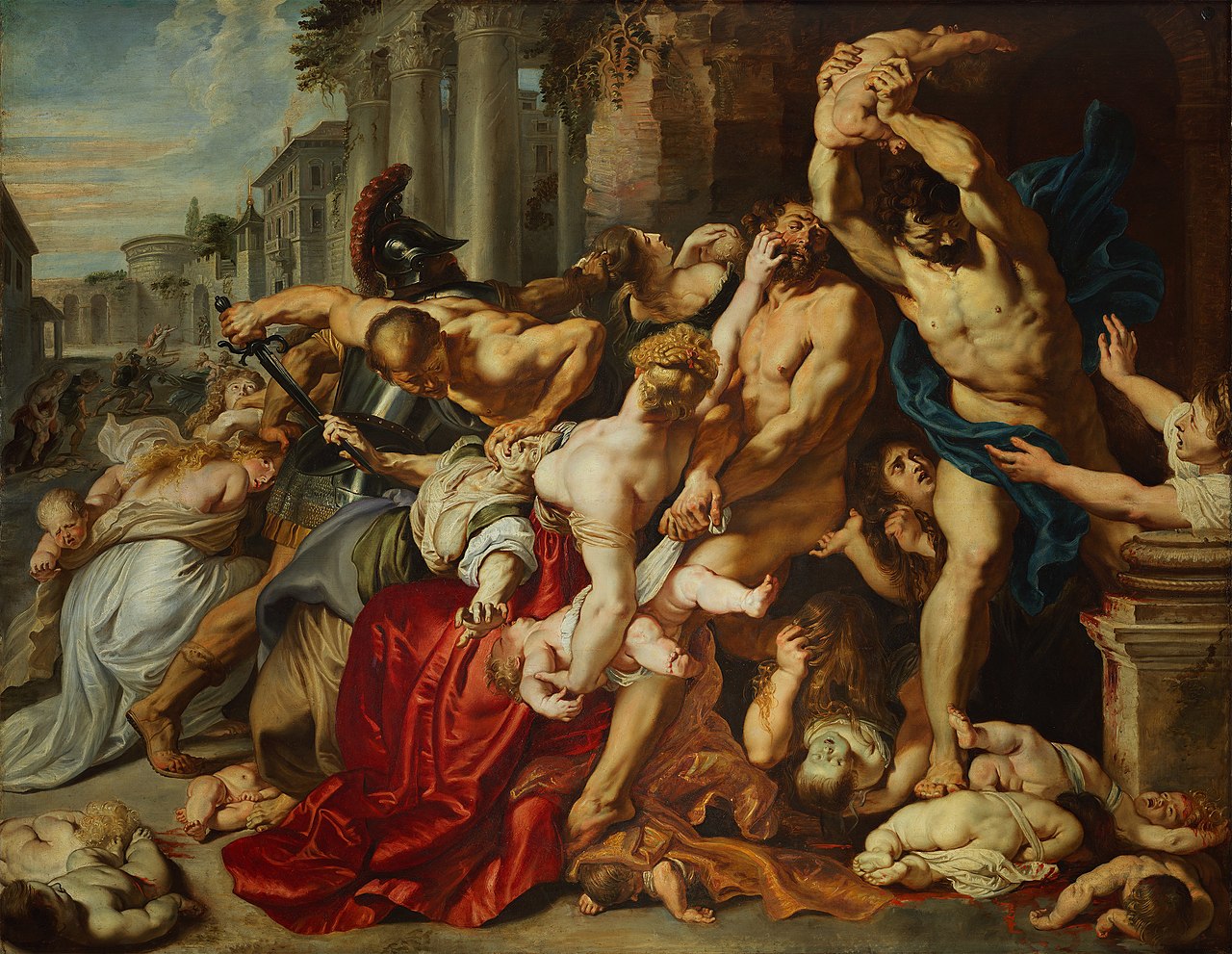 Massacre of the Innocents. Art Gallery of Ontario.

One of the most appreciated aspects of Rubens’ work during his time was his ability to mix beauty and horror in equal parts in a single image. The Head of Medusa, which is one of two versions and is here in the United States for the very first time, is one such work. The beautiful rendering of the snakes and salamanders, possibly done by Frans Snyders, complicates the horror of the ashen severed head around which they squirm, springing to life from drops of blood. This is just the sort of painting wealthy patrons loved to have hanging over their mantle pieces because it sparked interesting conversations about the nature of beauty and fear. 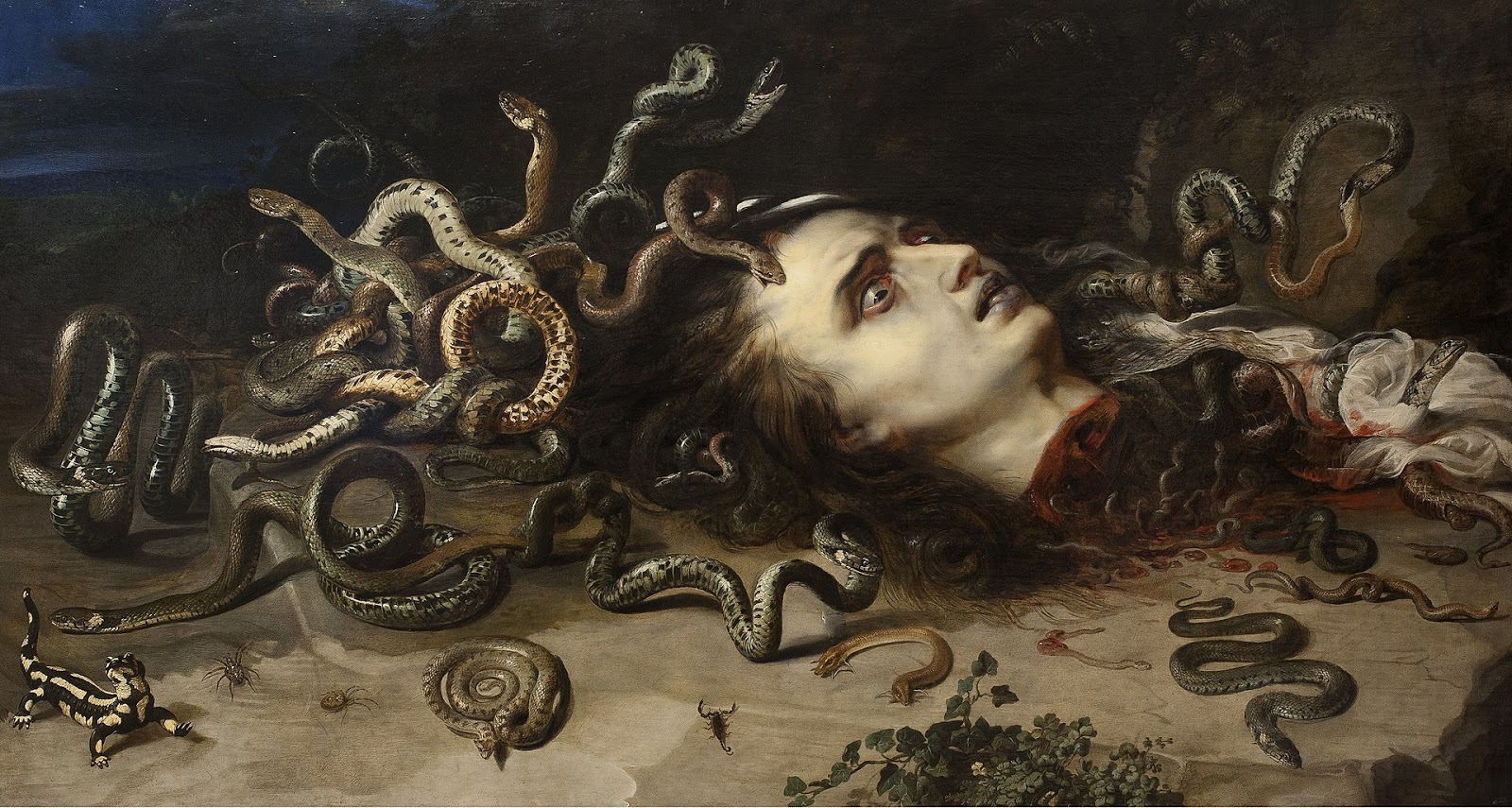 The Head of Medusa. Moravian Gallery in Brno, Czech Republic.

Similarly, Rubens’ Lot and his Daughters would have provided much fodder for conversation. It depicts the Old Testament story in which Lot’s daughters, believing they are the last humans alive, seduce their father to carry on the human race. Rubens based the face of Lot on a classical statue of a satyr (a sexually predatory being) while he took Lot’s pose from Leda, of Michelangelo’s Leda and the Swan, who is certainly the victim in that narrative. Thus, Rubens raises uncomfortable questions about victimhood, as well as the viewer’s complicity in that act of incest. The educated circles in which Rubens moved would have immediately picked up on all those references, and it likely would have allowed for some interesting talk at dinner parties.

After the vibrant colors and vast canvases of his history paintings, the exhibit’s final room all about print culture seems rather underwhelming at first. Rubens was a shrewd businessman and one of the most successful artists ever, so it makes sense that he turned to print culture as a way to disseminate his images even further, completing illustrations for books and also just making engravings of his best paintings. However, upon close inspection, the drawings in this room, while less flashy, are absolutely exquisite. The room is tied together nicely with a later image of the Raising of the Cross that proves just how important those early years of development in Antwerp were for Rubens. He would go on to become a tremendously prolific and successful artist, employing dozens of assistants in his workshop, collaborating with some of the top names of his day, becoming a successful diplomat, elevating the role of the artist in society, and even creating a brand new adjective for curvaceous ladies (rubenesque), but a few key prints suggest he may have had a certain sentimental attitude toward his early years of success in Antwerp. D'aww. 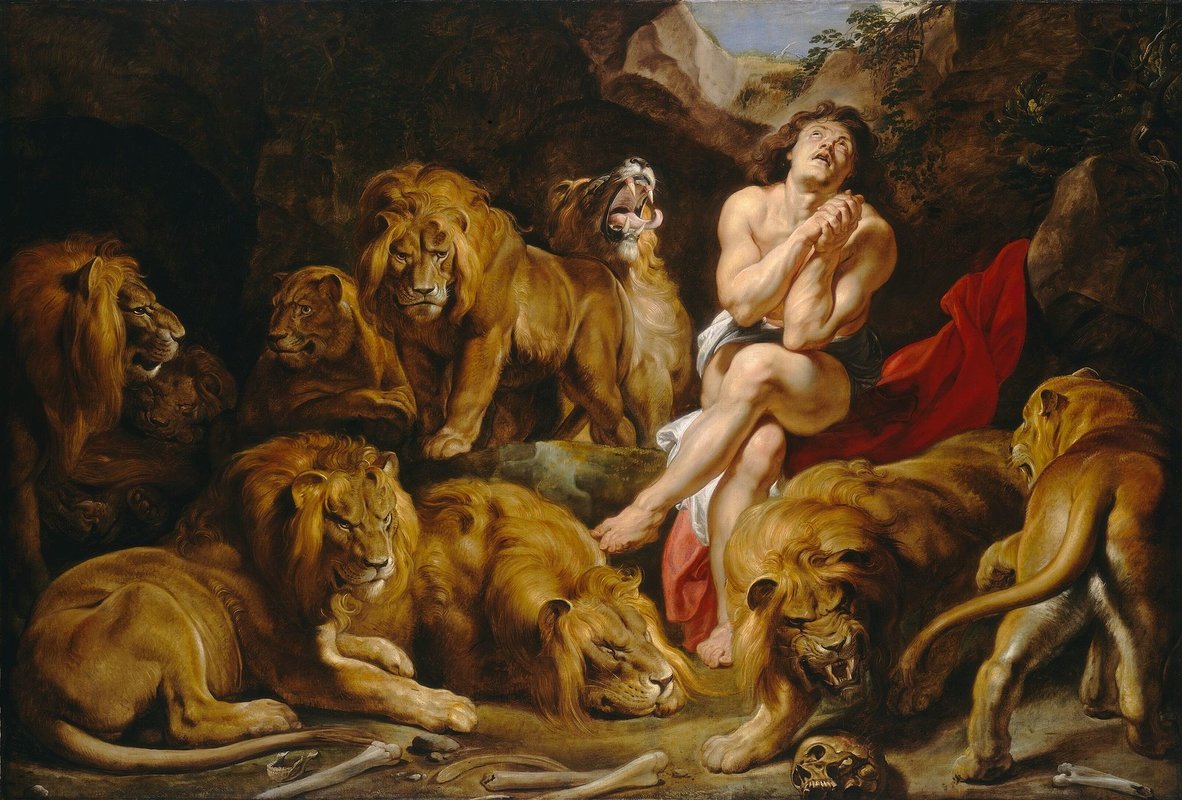 The exhibit ends where it begins, with three masterpieces of enormous size. The most dazzling is by far Daniel in the Lions’ Den. It’s the most beloved painting by school groups in the National Gallery for obvious reasons, so if you’re wondering whether or not you should go to this exhibit, the lions themselves should be a good enough answer:

And are you really going to argue with lions?

There is much to admire in Rubens’ work: the brushwork, at times subtle and refined, at times exuberant and free; the beautifully arranged drama of his scenes; the quantity of different facial expressions he was able to uncannily reproduce; his beautiful renderings of golden curls on the heads of children, etc. The list goes on. The exhibit is well curated, with a range of high quality examples from all over Europe. More wall text about Rubens’ truly fascinating life and personality would have been nice, but then I think I’m the only person who ever wants MORE wall text. (That’s what the catalog is for, anyway.)  But if you do get bored, and I don’t think that’s very likely, there are a few games you could play: “Count the corpses” (There are a lot of them), “Count the dogs” (those baroque artists sure loved their pupperinos), and “Count the Women Making this Face”: 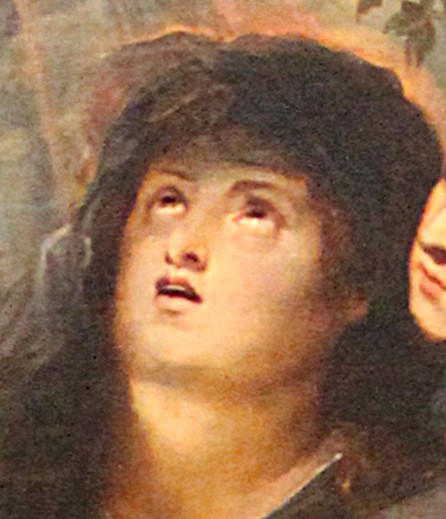 That would be the expression known as "I'm so in awe my face has become a potato."

While it is possible to have too many Reubens, one can never have enough Rubens. I'm off to the Legion to count the potato faces

Jeannette, on Rubens and Reubens: 'they both often contain significant amounts of fat'