How much do you know about Renaissance Art? Take our quiz! 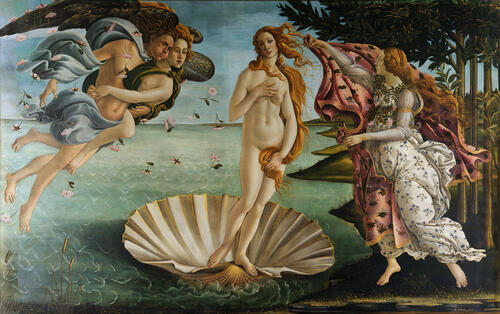 If you like hot bods, ugly babies, and myths, then you might have just found your new favorite art movement. Class is in session so sit down while we take you through the wild and crazy time known as the Italian Renaissance.

The Renaissance might not have had to replace the Middle Ages if the actual historical period were as cool and fun as Medieval Times, the themed restaurant where you can watch a jousting tournament while eating a turkey leg with your hands (so authentic). Calling the medieval period the Dark Ages isn’t fair because there really was a lot going on during this time – it just wasn’t as impressive as anything made during the Renaissance. Feudalism served as the principal organizational structure for society during the medieval period. Even though feudalism inspired cool things like knights, it didn’t create the best environment for art production. People had lots of land but no money, so they couldn’t fund glamorous art commissions. Luckily for us, Italy began to transform in the 13th and 14th centuries. Instead of small estates ran by lords and populated by serfs, cities began to grow, and lots of fancy, rich people settled down in areas like Florence, Venice, and Siena. With urban centers such as these, the seeds of the Renaissance were finally in place. 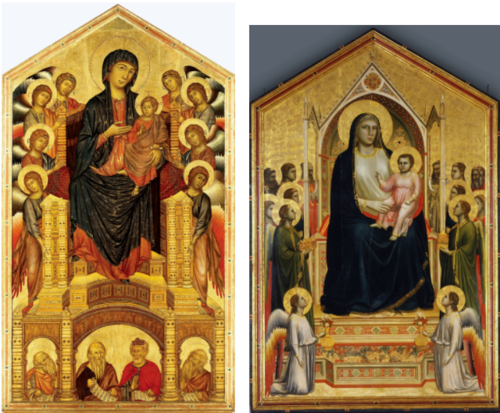 Left: Santa Trinita Madonna by Cimabue and Right: Enthroned Madonna by Giotto, in the Uffizi Gallery

The painting on the left is a work by Cimabue, an artist who was on the cusp of medieval and Renaissance art but just wasn’t as good as his counterpart Giotto, whose painting is on the right. Comparing them side by side is an easy way to show how Giotto picked up what Cimabue was putting down but did it way better. Cimabue’s painting is based in the Byzantine tradition; the image is extremely flat, and the figures all have creepy, gaunt faces. Would someone please get this Mary a cup of coffee? Giotto, on the other hand, is responsible for starting a totally new style of painting in Florence that basically changed the painting game forever. The throne in which he places Mary and baby Jesus creates a more convincing rendering of three-dimensional space, and the layering of figures on either side of the throne suggests depth. As soon as Giotto came up on the scene, people all agreed that Cimabue was so five years ago.

What really set Giotto apart from Cimabue was that his people actually looked kind of real! Artists who came after him latched onto this idea, which also came from the study of Classical Greece and Rome. Renaissance people wanted the Middle Ages to GTFO because they viewed antiquity as the pinnacle of art and architecture, so they started to emulate Classical themes and styles in their own art. This is where the Renaissance gets its name – “Renaissance” means “rebirth,” and it is a rebirth of Classical values. Individual experience and the study of history using actual objects, buildings, and documents became more important than the medieval style of just believing whatever the Catholic Church said. Being in Italy made this super easy because many of the ruins were either right in these artists’ hometowns or located in the places they traveled for that ancient inspo.

David by Donatello, in the Bargello National Museum

The Quattrocento, the fancy name for the 1400s, is when things start to get really good. Wealthy families gained secular power in the urban center of Florence, and the Medici family in particular was extremely rich and influential in the quickly growing art world. The Medicis built palaces for themselves and funded the buildings that later became the Uffizi Gallery. In addition to having a sweet name, Cosimo de Medici used the money his family made from banking to help develop Florentine art as we know it today and might have even commissioned the creation of Donatello’s bronze David. Donatello is the first of our turtle buddies to attain Renaissance fame because he was born the earliest. This David was a turning-point for Renaissance art because it was the first large-scale nude sculpture since the hallowed period of antiquity and solidified that looking backward in time would help create amazing, new artworks. Even though David is a Biblical man (in case you’ve forgotten the story, Donatello shows David crushing the head of his foe, the giant Goliath), Donatello presents him as a Classical hero. Donatello ushered in this new phase of the Renaissance by rejecting the medieval idea that nude figures were too taboo. Enough with being prude – the Renaissance nude could be sexy, sassy, and Classically-inspired!

Although it seems like all of Renaissance art was a march to the superstars of the High Renaissance, there were some outliers along the way. Sandro Botticelli  believed in creating art that reflected emotions and the spirit rather than the outside world. 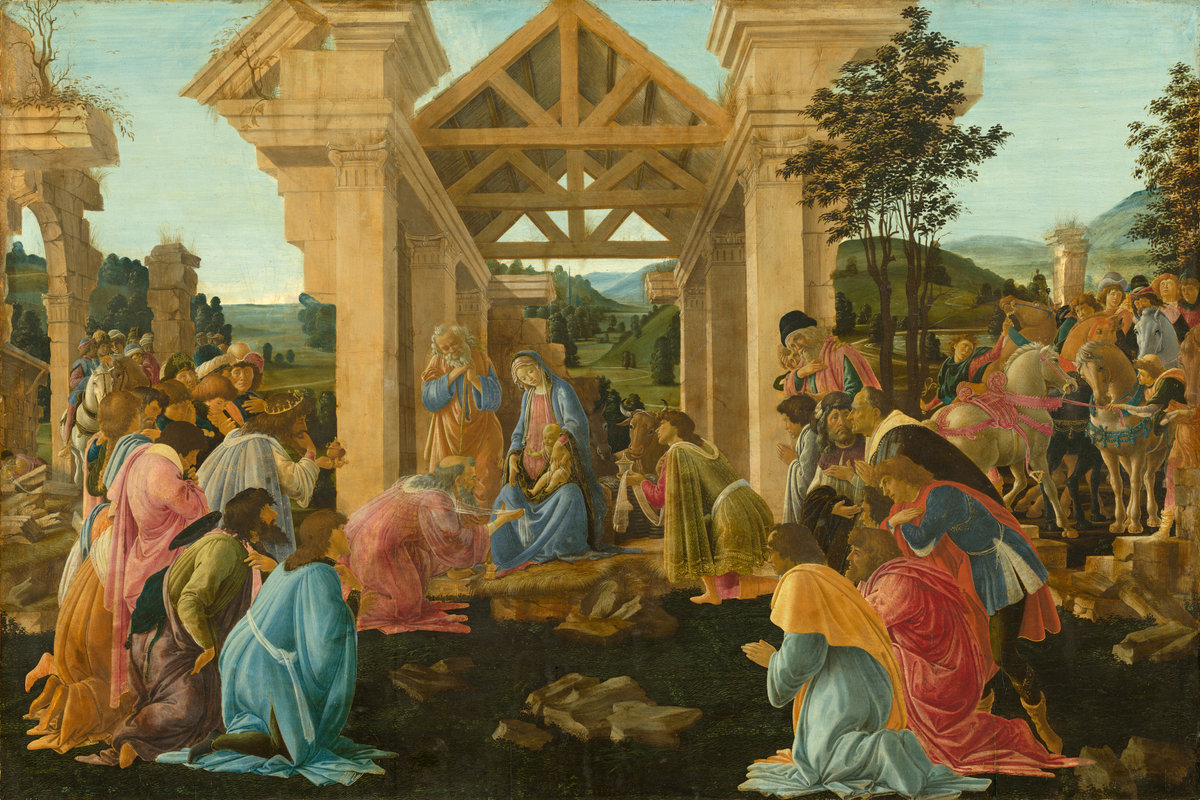 The Adoration of the Magi by Sandro Botticelli, in the National Gallery of Art, Washington, D.C.

A follower of the earlier master Piero della Francesca called Botticelli a master of perspective, which was something Renaissance artists had begun to develop. Botticelli had refined the idea that started way, way back with Giotto – that a two-dimensional image could reflect three-dimensional space the way we experience it in real life. Just look at how the structure above the holy family actually seems to recede into the space of the painting. Nice job, Botticelli.

Botticelli liked to imagine how these stories, both Biblical and mythological, would look, and he created whimsical and endearing paintings to tell these stories. If you like books that kind of have to do with art history but are also fictional, then I definitely recommend The Botticelli Secret by Marina Fiorato. It is loosely based on Botticelli’s painting Primavera and is EXCELLENT.

Now, my friends, is the moment we’ve all been waiting for. We finally get to talk about Leonardo da Vinci! I always think of the artists who were later immortalized in the form of four teenage, crime-fighting, pizza-loving turtles as a single entity. However, this is pretty misleading. Donatello came way before the other three, and da Vinci started working a bit before Michelangelo and Raphael did. The way we conceptualize da Vinci, as placing him a little bit in the future with the other two, is a testament to his genius and just how far ahead of everyone else he was. 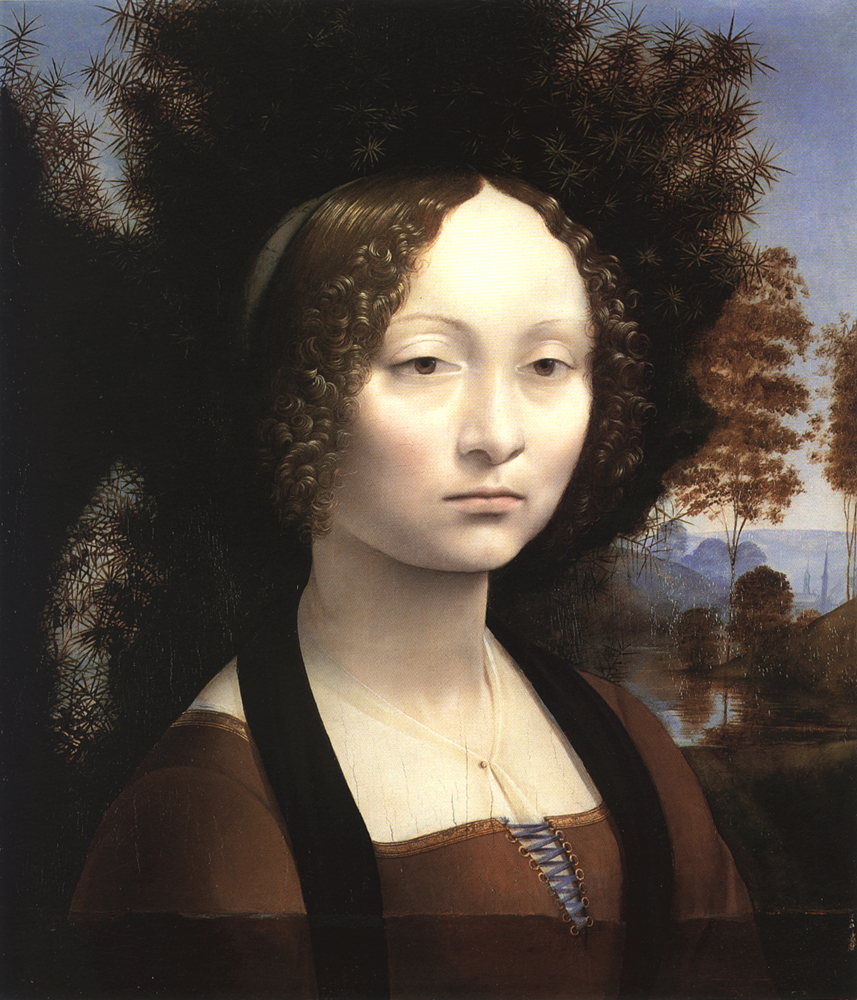 Sure the Mona Lisa is probably the most famous painting of all time, but let’s consider one of da Vinci’s other masterpieces, perhaps only if for its awesome resting b*tch face. Leo loved nature above all else, and the spectacular vistas in the backgrounds of his portraits definitely show off both his talent and love for them. The idea of portraiture itself is pretty important here, and we must remember how significant it was for da Vinci to take such great care in depicting a normal, non-holy person after a long reign of mostly Jesus paintings. Like many of the ideas here, portraits started in ancient Greece and Rome. The resurgence of portraiture tells us that, as the Renaissance progressed, people were becoming more interested in themselves and also had the money to become secular patrons of art. More art, made for more people, and for more reasons? Now that’s something to celebrate!

Leonardo wasn’t the only guy taking great leaps and bounds in the name of art. Michelangelo also dissected dead bodies to gain a better understanding of human anatomy so that they could truly represent the human form in either paint or marble. Well, let me tell you, it paid off because Michelangelo’s David  is one fine specimen . 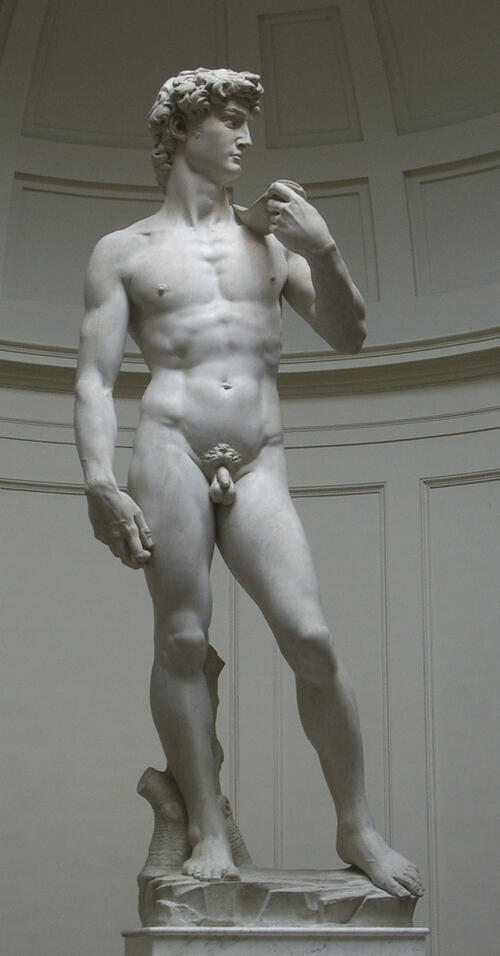 David by Michelangelo, in the Academy of Fine Arts of Florence

David completed what Michelangelo started when he began to carve the human figure in works like Bacchus and the Pietà. Donatello, I’ma let you finish, but Michelangelo had one of the best Davids of all time. Just kidding (I guess), but Michelangelo’s rendering of the human form from a freakin’ ROCK is just amazing. In another totally not surprising reference to the Classical era, the heroic nude figure was a hallmark of ancient Greece and Rome. I think we can all agree that this example of High Renaissance sculpture is pretty much the apex of this era of production. 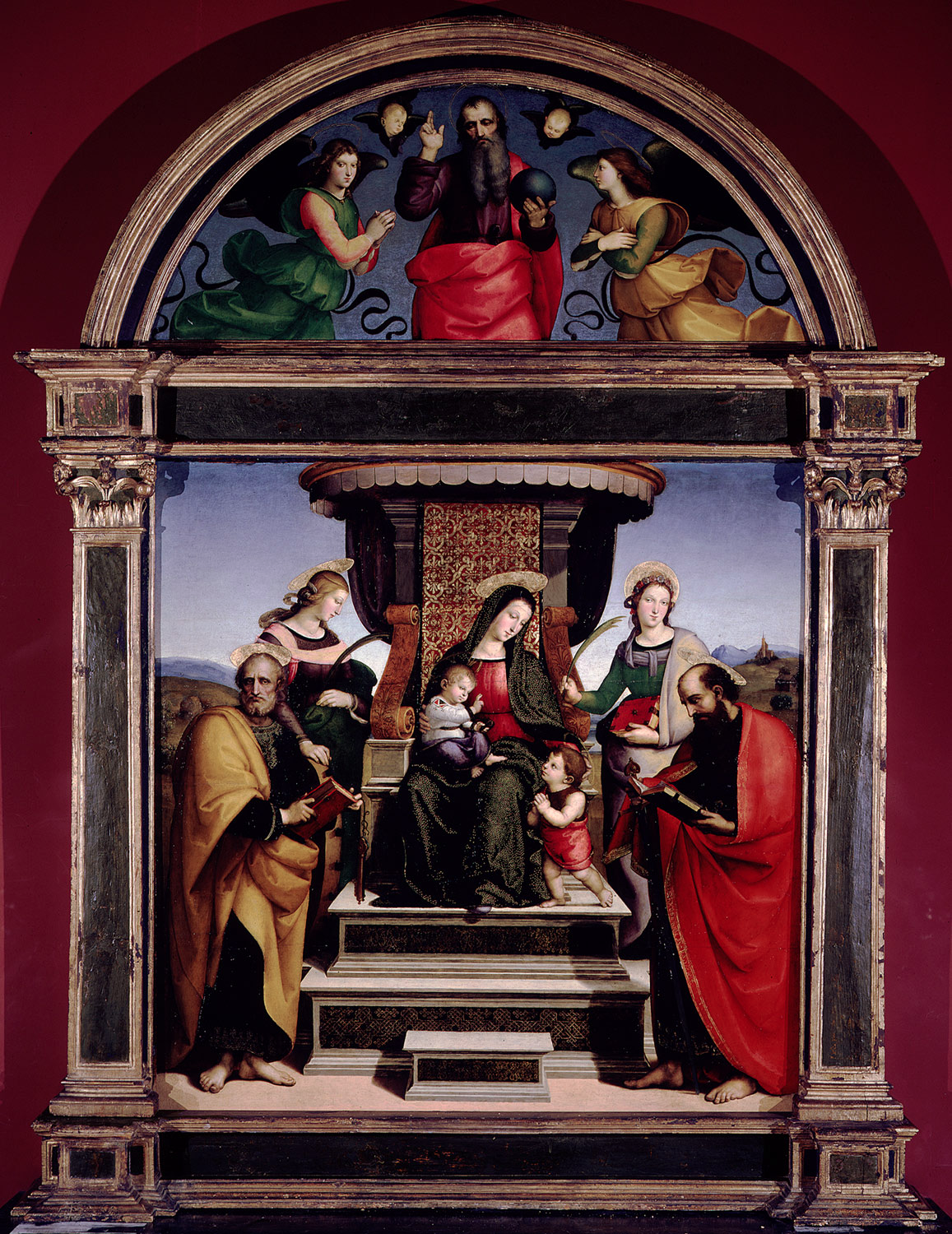 Madonna and Child Enthroned by Saints by Raphael, in The Metropolitan Museum of Art

Raphael was the youngest of the Renaissance masters. He was mostly interested in creating pictures with perfect compositional balance and figuring out how to harmoniously unite all elements of any picture. Giorgio Vasari, an artist as well as the very first art historian, wrote Lives of the Painters, Sculptors and Architects, which was basically just a book about the people he met and worked with. In this hefty text, Vasari describes the Met’s very own Madonna and Child Enthroned by Saints, but rest assured that Vasari spares no opportunity to throw some shade. Vasari says that Raphael’s style “dramatically improved” after a trip to Florence, where works by da Vinci and Michelangelo inspired the young artist. Raised in Perugia, Raphael only had exposure to the other Renaissance geniuses after his own study abroad trip, which actually happened in the middle of him painting this altarpiece. Raphael painted the women’s faces before the trip, which explains why they look so similar. The men’s faces, on the other hand, look more truthfully modeled and more individualized because Raphael painted them after his October 1504 trip. His School of Athens achieves a seamless interweaving of Classical Greece and the contemporary, Renaissance moment. Raphael based many of the Classical characters on his peers and also illustrated the many facets of the well-rounded Renaissance man. 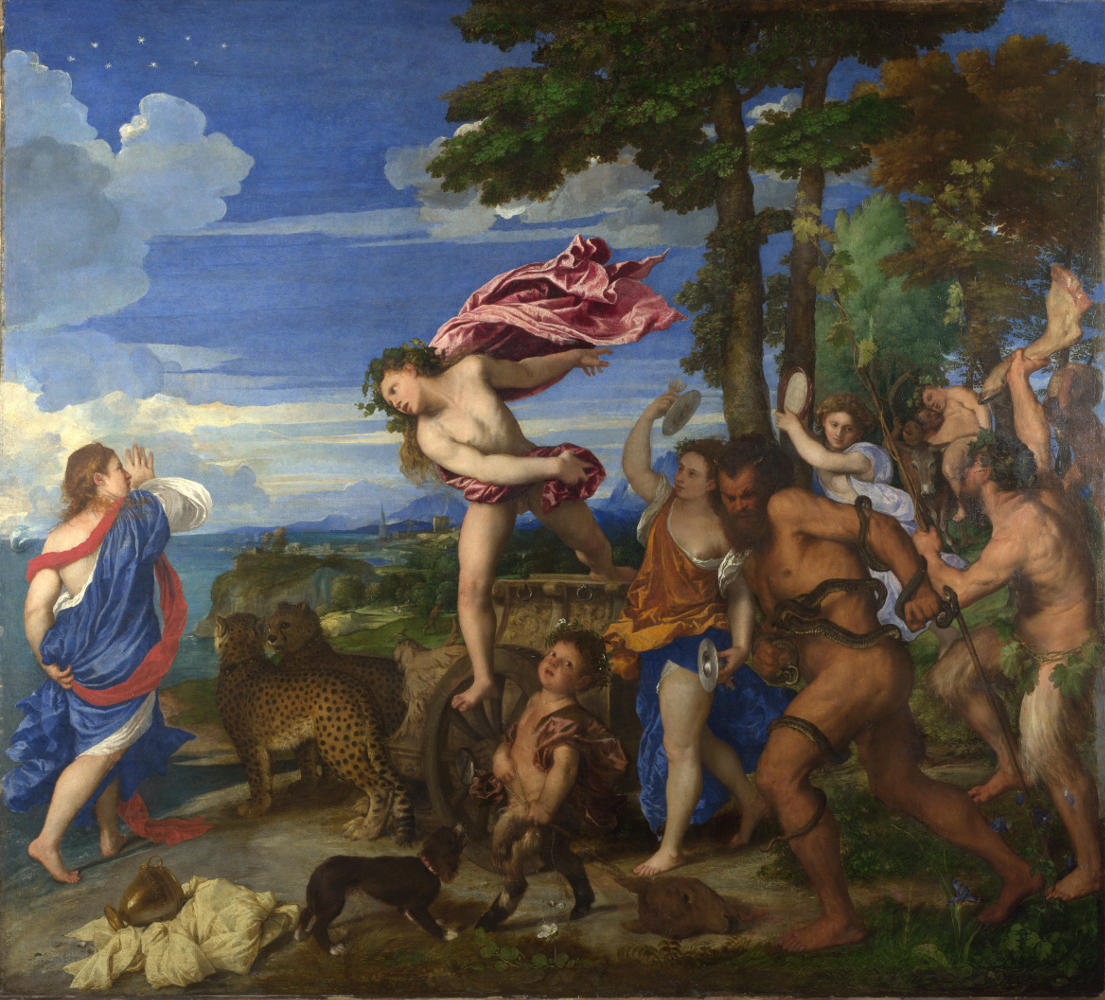 Bacchus and Ariadne by Titian, in the National Gallery London

Even though he was farther away in Venice, Titian did a good job of recognizing Renaissance ideals and then completely rejecting them. Muted colors? Who cares. Compositional harmony and symmetry? No way. Titian did what he wanted. This increase in drama, emotion, and artistic liberty broke with traditional Renaissance art and ushered in what writers and theorists not-so-affectionately called Mannerism. These writers felt that everything past 1520 just wasn’t as good as what had come before – after such a great height, Italian art was already in decline. Artists like Titian and Tintoretto toe the line between Renaissance and Mannerist, but Bronzino is totally Mannerist. The subtle elements of Bronzino’s paintings are just enough to make you feel weird but also want to continue looking, the best and weirdest being Venus, Cupid, Folly and Time: 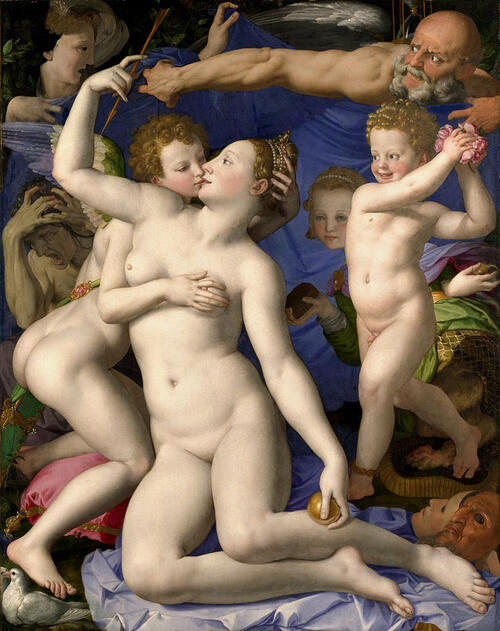 In the National Gallery London

I could probably go on for hours about the artists, techniques, and various important things about the Renaissance, but these are definitely the need-to-know people from Italy during this period. Don’t even get me started on the Northern Renaissance! But I guess that’s another blog for another day.

*Due to Facebook's puritanical views on the human body and art, we are forced to censor these images in order to advertise this post. The bars will be removed when the ad is done.*