Sometime between using the “1-Click” function on Amazon, buying groceries at Safeway using an automated self checkout machine, and downloading an app on my phone that makes it look like I’m drinking beer off the screen, I attended the de Young Museum’s preview for their latest exhibit Cult of the Machine: Precisionism and American Art (on display March 24 – August 12, 2018), an exhibit that showcases a rival time in American history when the feats of technology were also powerful, fast, and overwhelming, but for altogether different reasons.

Between the World Wars, after America had become a major economic and global superpower, industry was booming and our long-held notions of technology crawled out from under their murky depths of hand-held tools and horse-drawn carriages, leaping for the skies and their scrapers, for automobiles, airplanes and jet engines, for cinema and the radio. An entirely new conception of machinery, efficiency, and precision arrived all at once; and with it came excitement, fear, apprehension, and a band of artists known as the Precisionists.

Precisionism is an art movement that mostly took place during the 1920s and 1930s (AKA “The Machine Age”), consisting of works depicting highly structured, geometric compositions with smooth surfaces meant to show a sleek, unnatural, “machined” aesthetic. Influenced by avant-garde European art styles such as Purism, Cubism, and Futurism, Precisionism was America’s first indigenous modern art movement, and tackled major American themes, like cities and industry, and other big, loud things.

Major players of the movement are Charles Sheeler, Georgia O’Keeffe, and Charles Demuth, alongside photographers such as Imogen Cunningham and Paul Strand. 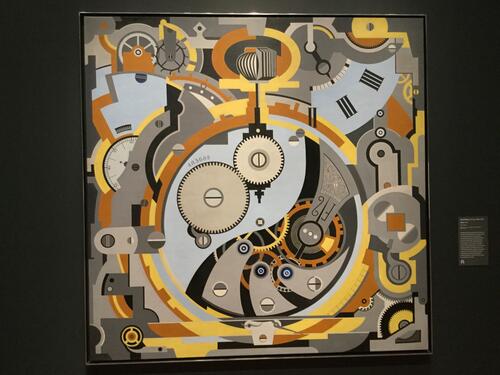 I know what you’re thinking: Where are the robots? Show me the robots, please. Sadly, although exhibition curator Emma Acker did note that the term “robot” was indeed coined during this time, no cold-hearted metal monsters stalk the exhibit. Still, there’s plenty of strange and fascinating depictions of machinery to behold.

Being there felt, in some parts, like walking through an old movie, quite literally. Right from the start was a screening of Ralph Steiner’s Mechanical Principles (1930), an experimental film depicting various machines and mechanisms operating in repetitive, balletic motions. It was mesmerizing, and, like much of Precisionism, its purpose was to abstract technology from its functional context, emphasizing the beauty and peculiarity of these bizarre new machines on their own, outside of the services they provide.

We also got to see short clips of Charlie Chaplin’s film Modern Times, inspired after Chaplin visited one of Henry Ford’s automobile assembly lines. The film famously depicts Chaplin as a poor factory worker who makes a mess of things and ends up zipping around in the cogs of some great machine.

Fans of skyscrapers cannot miss this show. These enormous buildings were favorite subjects of the Precisionists, especially Georgia O’Keeffe, and their innovation inspired more than just paintings.

For the book-nerd, a “skyscraper” bookcase: 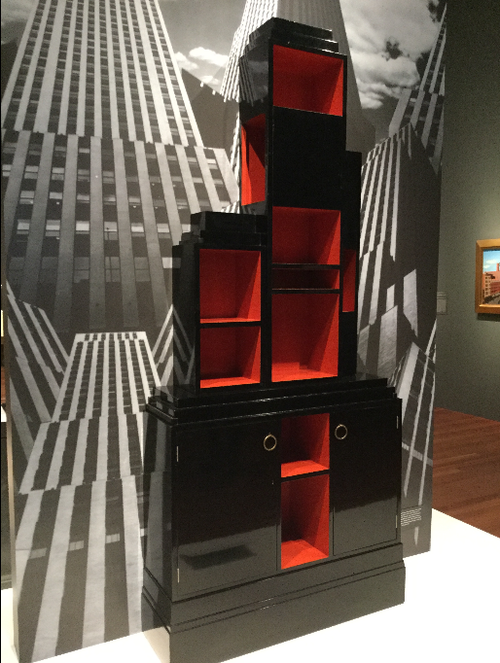 For the cocktail connoisseur, a “Skyscraper” cocktail shaker: 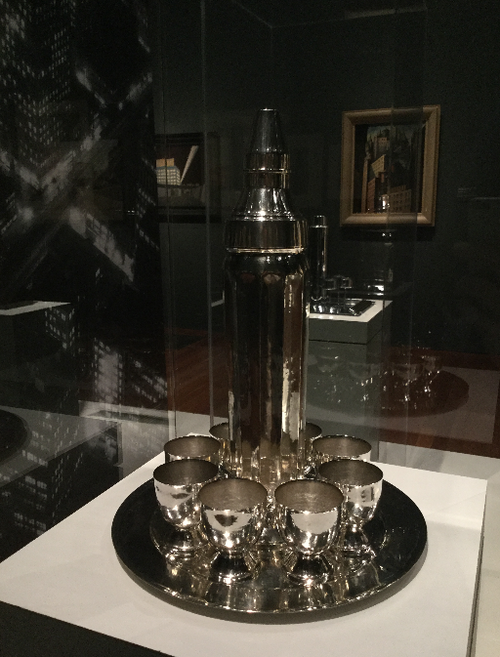 Not into architecture? How about classic cars? Rocket ships? Futuristic Lightning-Melded Money Gates? There’s something for everyone at this show. 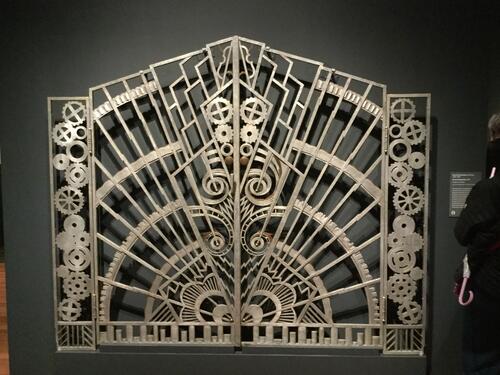 The Precisionist paintings themselves range in level of detail and complexity, but there is a clear compositional theme among all of them that suggests each of these artists really enjoyed their geometry classes in high school. Every piece has fine lines, clear shapes, and neat, solid brushstrokes, creating a clean look. Almost too clean. Unnaturally clean. Like, sophisticated, technical, machine clean. Got it? 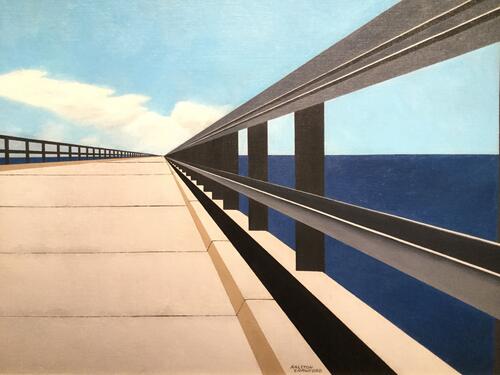 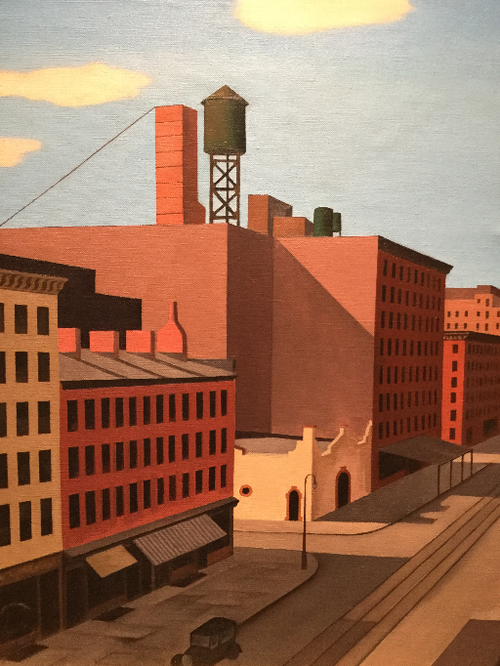 Like people of today, the Precisionists also thought the world would be better without people in it. 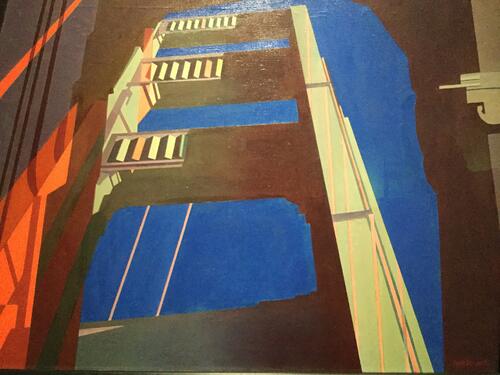 Sheeler probably painted this one while he was stuck in traffic... 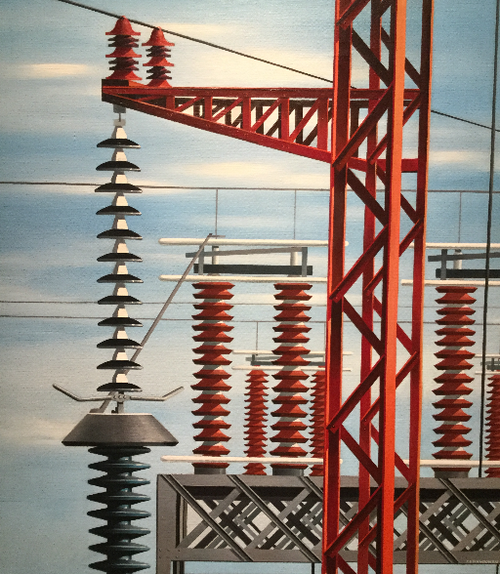 The detail on these lines is shocking-ly good!

As you can see, bridges, highways, and streets were common subjects, as well as other kinds of technology featuring electrical power. Advertisements too had their place among the artists’ work, who saw advertisement and even typography as geometric, machine-like forms worthy of imitation. 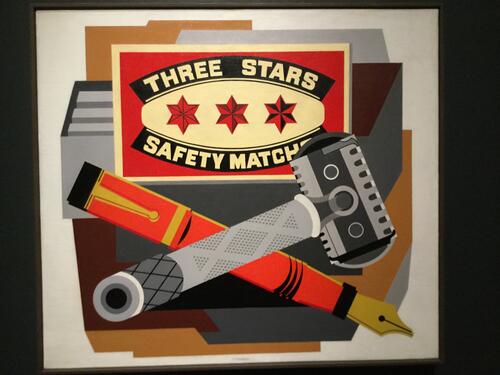 “For that close, very precise, virtually perfect shave only robots can execute.”

Many Precisionist paintings were devoid of people, but when figures were represented, their placement was carefully designed to emphasize isolation and loneliness.

The two nuns shown in Francis Criss’s Astor Place look totally out of place, if you ask me. Besides being on a street that is otherwise eerily devoid of people, the nuns themselves represent an antiquated tradition that feels threatened by the oncoming industrial changes taking shape around them, epitomized by the looming “STEEL” billboard in the background. Note the billboard is complete with a stick figure/robot construction man. 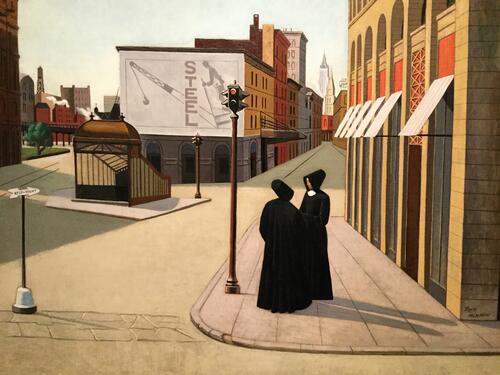 Sure, they look like us, but where’s the humanity??

Just like today, with all our devices and 1-clicks and robot checkout stands, America was apprehensive about the industrial and technological changes taking place so rapidly across the country. Nobody knew what the eventual effect would be of all of these innovations, and many, like the Precisionists, were skeptical towards an unthinking idolization of them. The Cult of the Machine exhibit strives to draw many comparisons between then and now, and even encourages its visitors to express their personal input over our own modern times. 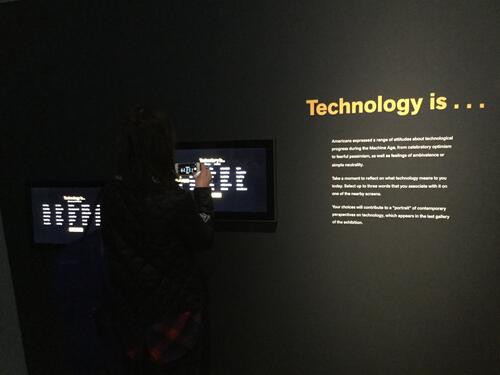 Towards the end of the exhibit, we were able to choose from a variety of opinions displayed on a screen to express how we felt about technology. Using some fancy algorithm, the answers we chose were organized by their frequency and compared with similar responses of those who had lived during the Machine Age and had written about these very same topics. The results were enlightening. (No spoilers!)

There’s so much to see and marvel at in the de Young’s latest exhibit Cult of the Machine, a show which provokes thought and discussion over an extremely relevant topic that history proves has been grappled with more than once before. Refreshing, too, is how this exhibit does not take sides, but rather faithfully showcases both the public excitement America has had for the innovations of this powerful technology as well as our understandable anxieties over its rapid and thoughtless deployment.

So everyone, set a reminder on your phones. With the agility and swiftness of a company that offers same-day delivery, get on down to the de Young and photobomb, record, and live-tweet the sh*t out of this awesome exhibit. Go now, before the robots finish taking our jobs!