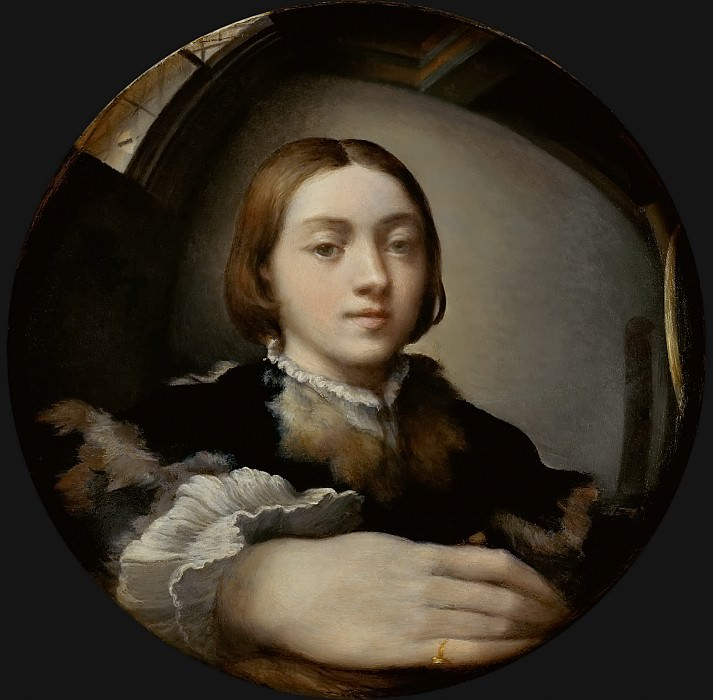 Something very strange was going on in Italy around the turn of the 16th century. The country was just cresting the wave of one of the most dazzling periods in Western art–the Italian High Renaissance–and yet suddenly, things were starting to look a little… off. The rationality and harmonious proportions of the High Renaissance gave way to outrageous anatomies, weird poses, wild colors, and mysterious meanings. Common sense was thrown out the window, and everything grew illogical, distorted, and just plain weird. Why did Renaissance art start doing this?

The style that emerged in the 1520s and lasted until 1600 (a period sometimes called the Late Renaissance) came to be known as Mannerism. It is named after “maniera”, an Italian term for “style” or “manner,” and refers to a stylized, exaggerated approach to painting and sculpture. When the term was first widely used in the 17th century, it was used pejoratively to disparage the Italian Renaissance art from this period, which later audiences deemed overly stylized and tasteless, a far cry from the classicism of the High Renaissance greats like Raphael and Michelangelo (although, if one were to look very closely at the Sistine Chapel ceiling, they would see the earliest stirrings of mannerist tendencies in Michelangelo’s figures). Today, however, Mannerism isn’t such a loaded term–we have 20th century expressionism and abstraction to thank for our modern weirdness metric–and instead we use it to broadly refer to 16th century art throughout Europe (and even in places like the Americas after Europeans arrived) that is fantastically stylized, highly artificial, somewhat distorted, and often emotionally provocative.

Perhaps because of its place as the “bridge” between the rationality of the Renaissance and the magnificence of the Baroque, Mannerism has always been a tough “-ism” to grasp. Its defining characteristics don’t seem to define anything at all. So in an effort to make sense of this odd moment in art, let’s try to nail down three solid characteristics: 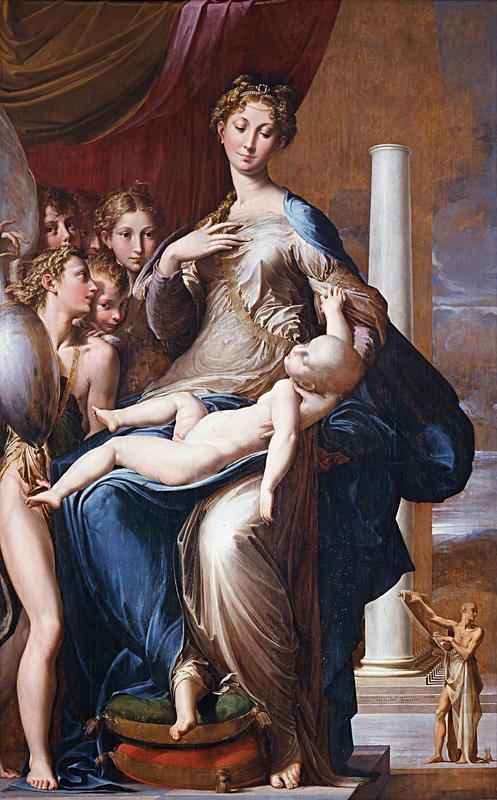 Or at least that was Italian artist Parmigianino’s approach when he painted Madonna with the Long Neck, sometimes called Madonna and Long Child with Angels and St. Jerome–either way, the subject matter’s general long-ness is emphasized. In the painting, we see the central figure of the Virgin dominate the composition, her long body coming to a point at her tiny head tilted upon an impossibly long neck. The Christ child lays sprawled across her lap, unnaturally long as well, while a group of clustered angels admire him from a narrow space on the right side of the painting. The left side of the painting is largely empty except for a sparse column in the background and the tiny figure of the prophet, Saint Jerome, who holds open a scroll, presumably full of mysterious prophecies. The background recedes dramatically into deep, deep space that seemingly goes on for miles. This is a work of extreme exaggeration. Everything, from the proportions of the figures to the illogical perspective to the random architectural elements, serves to pull you into the otherworldly space of the divine, where correct proportions are not required. 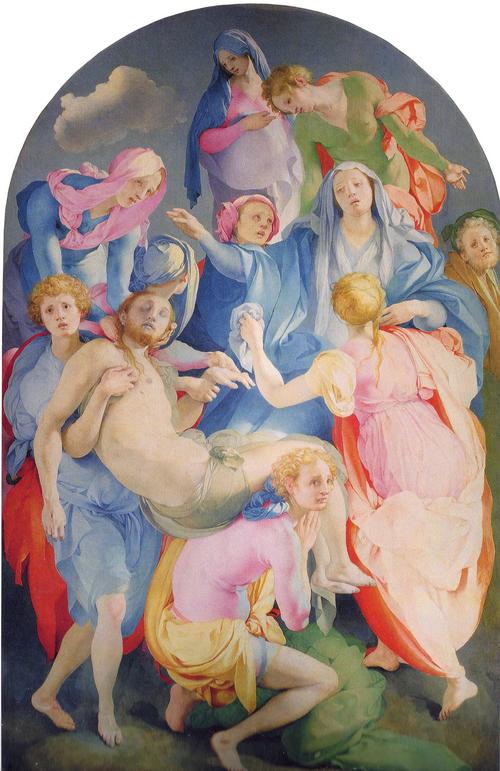 Many Mannerist artists shunned the naturalistic colors used by the High Renaissance artists in favor of more unrealistic hues. The Italian artist Jacopo da Pontormo was especially fond of painting with a highly saturated palette, which we can see on full display in The Deposition. The scene is a chaotic mass of twisting bodies that all appear washed out, as if they were photographed using the brightest flash setting on a camera. The colors become even stranger the longer you examine the figures and begin to notice that some of them appear to sport pink and blue torsos, colors extending from–yet indistinguishable from–their clothing. The garish colors nearly distract you from the subject matter: Christ in the moment that he is taken down from the cross. It seems unusual that Pontormo would use such a garish palette to depict this poignant scene of grief and suffering, but then again, Mannerism is nothing if not unusual. 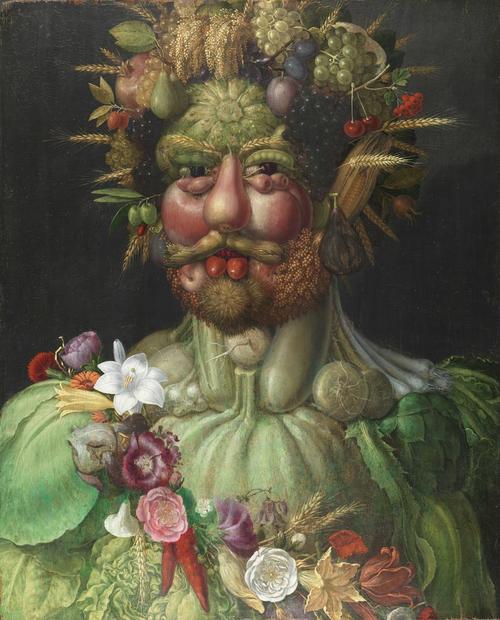 Speaking of unusual, one Mannerist artist was in a league of his own entirely. Giuseppe Arcimboldo was the court painter to the eccentric Holy Roman Emperor Rudolf II at his palace in Prague. The emperor was a great patron and collector of art (in fact, he patronized so much Mannerist art that the adjective Rudolfine, as in “Rudolfine Mannerism,” is often used in art history to describe the work created in Prague during his reign as emperor), and in the service of his court, Arcimboldo had found his audience. The emperor had a penchant for exotic animals, botanical gardens, and any strange object he could house in his extensive “cabinet of curiosities.” Arcimboldo’s imaginative portrait heads, made entirely of objects such as fruits, vegetables, flowers, fish and books fit right in. His whimsical works were certainly made to entertain the court, but more than just odd, fanciful pictures, these works reflect a part of Renaissance culture that isn’t often discussed.

The Renaissance was not just a period of interest in–and revival of–ideas from antiquity, it was also a period of great curiosity, discovery, and anxiety. The early and mid-16th century was a period of enormous social, economic, and political change throughout the world. The rise of capitalism and absolutism, colonization and exploitation of new lands and peoples, and new developments in the science of anatomy and optics contributed to a general sense of unease and ambiguity, which some could argue is reflected in Mannerism’s contorted and unbalanced forms.

The 16th century also saw the rise of a wealthy merchant class, thanks in large part to the forced colonization of distant lands, and they wanted to spend that money on art. The tastes of aristocratic patrons, particularly those within court circles, directly influenced the self-conscious artifice and deliberate complexity of Mannerist art. Patrons were eager to own a piece of art on the cutting edge of the new developments in style so they could show off their knowledge and good taste.

Lastly, perhaps the most direct influence on Mannerist art was the rise of the status of the artist from the nameless craftsmen in a Medieval guild to the single-named celebrities we think of today: Michelangelo, Botticelli, Tintoretto, and so on. The elevation of individual potential–a facet of humanist thought–inevitably led to the development of personal style. Collecting the art of someone with their own distinctive style meant you were also collecting their ingenuity and intellect. Stylishness was therefore a must by the mid-16th century.

Eventually, the Catholic Counter-Reformation would declare Mannerist art too sensuous and ambiguous for depicting religious imagery. In 1563, the Council of Trent–the governing body in charge of reforming the Catholic church–met for a final session to discuss images specifically. While the council was not specific about what art should look like, it did express that sacred images should be clear and devoid of showy artistry. Put another way, art should not be lascivious or frivolous, it should not perplex viewers (which Mannerists seemingly loved to do), and ultimately, it should serve an educational purpose, moving viewers to further dedicate their lives to Christ. This all came at a time when the Church was anxious to counter Protestant idolatry, which called for the destruction of all religious images, claiming they encouraged the worship of false idols. After all, the majority of people at the time were illiterate, so the educational role of images for teaching the Catholic faithful could not be understated. This role became especially crucial as the Church expanded its reach with conquests, colonialism, and evangelization beyond Europe during the 16th century.

The effects of the Counter-Reformation on art would be felt for decades, and the Mannerists were effectively stymied by the anxiety of images felt throughout Catholic Christendom. This is not to say that Mannerism didn’t find a way to adapt to the Tridentine (adj. meaning, relating to the Council of Trent) decrees. One notable example was the Spanish master, El Greco (born Domenikos Theotokopoulos), or The Greek. Born and raised in Crete, El Greco was trained as a Greek icon painter (in a post-Byzantine style). He left for Venice at age twenty-six, where he worked in Titian’s workshop and was influenced by Tintoretto’s loose brushwork. He then traveled to Rome before settling in Toledo, Spain in 1577 to work for the Spanish King Philip II. He lived there until his death in 1614.

Toledo was a very Catholic place, so you can imagine El Greco–in the service of the King, no less–would have been eager to stick to the Tridentine edicts on images. And for the most part, he was! His painting, Burial of the Count of Orgaz (1586–88), with its depiction of saints in both the earthly and heavenly realms, strongly reaffirmed the importance of saints as the intercessors between humans and the divine (and provided a major counter to the Protestant attacks on saints in the Church). El Greco’s ability to pair the mystical and the spiritual with the life around him was just what Counter Reformation art was looking for. However, one needs only to observe his elongated, strangely lit figures, use of unnatural color, and odd fisheye lens perspective to see that Mannerist techniques are alive and well in his work.

Despite attacks from the most intimidating governing body in the world at the time, Mannerism went on to have a lasting legacy. Many years after the decline of the Mannerists, Baroque artists dared to create dynamic and dramatic works showcasing a refinement of the experimentation their predecessors pioneered. Mannerism paved the way and emboldened future generations of artists to innovate and push the boundaries of style. More than just a weird little moment sandwiched between the well-known Renaissance and Baroque periods, Mannerism indicated the moment that art became individualized, self-consciously stylized, and elevated as a tool with which the elite could compare intellectual notes. In other words, Mannerism was a radically modern moment in art, a fantastically weird period of discovery that resulted in an explosion of creativity that still intrigues audiences almost 500 years later.

Parigianino's artwork exemplifies the grace and style of Mannerism.

Thank you very much to the owner of the blog, this is a beautifully designed site with a lot of interesting and rich content.

“ Everything, from the proportions of the figures to the illogical perspective to the random architectural elements, serves to pull you into the otherworldly space of the divine, where correct proportions are not required.” This is so fascinating to me, especially when contrasted with the Tridentine decree that art depicting the divine should not “perplex” the viewer. It’s…the divine! It’s literally beyond human comprehension, that’s the whole point 😂 The Mannerists were dope. At least they were thinking outside the box!

Wow mannerism was a vibe!! Thanks for this very good read!

among us
7 months ago

The replies on this forum caught me off guard.