Monet: The Late Years at the De Young

Two years ago, the Fine Arts Museums of San Francisco put on a show called “Monet: the Early Years.” To no one’s surprise, it was a smash hit, so they decided to team up with the folks at the Kimbell Art Museum once again with a show that this time features the later works of Claude Monet, focusing primarily on the period between 1913 and 1926.

The work produced in his middle years--after his youth, when he identified as part of the Barbizon school, and before this later period now on display at the De Young--is probably Monet at his most recognizable. They’re the days he spearheaded the Impressionist movement, when he and friends like Degas and Manet began capturing the momentary, fleeting effects of light and weather with the help of free, loose brushstrokes and radical new compositions. And you definitely know his body of work from this time. It’s the endless sunrises and sunsets, gardenscapes, and various series of Cathedrals and haystacks.

The first room of the new exhibit lulls you into a false sense of security. “Ahh yes, THIS is Monet,” you say to yourself as you enter the room, full of works from the 1890’s. There may not be any haystacks, but there are many pleasant views of his garden at Giverny, that Mecca for all Monet lovers. This room serves to introduce us to his beloved garden, where he spent the majority of his time for the last two decades of his life. 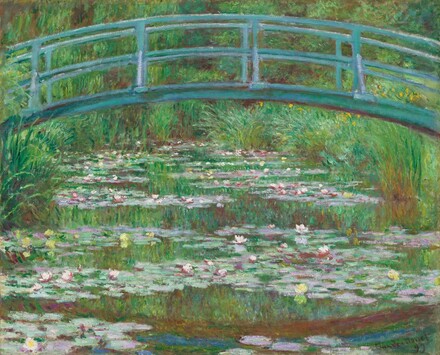 Monet worked on that garden for forty years, and he approached gardening with the same intensity and passion for color as he did his painting. With an artist’s eye, trained from his years of experience painting en plein air, he arranged the flower beds, trees, arches of roses, and his darling lily pond into compositions that would be ideal for painting. He planted red and gold flowers in areas with Westerly views to maximize the effects of sunset. He sprinkled white blooms between darker hued blue ones to create sense of sparkle. He planted pink flowers behind red ones to enhance the atmospheric effects of light at different times of day. He banned plants with variegated foliage because they looked too busy. 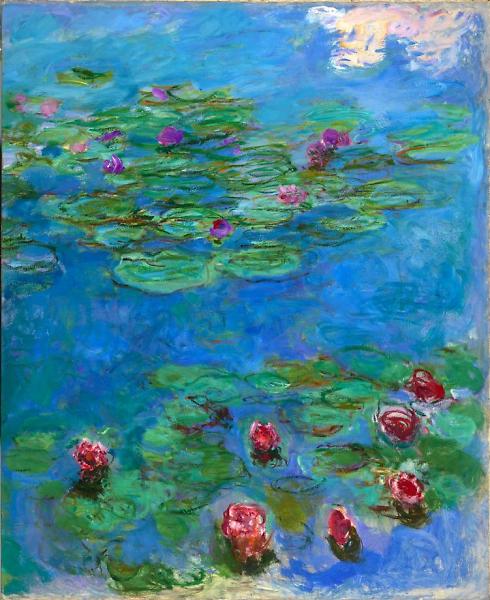 And perhaps Monet's greatest labor of love was his Japanese lily pond. He fought with local government to divert part of the Epte river just to create the darned thing, which his neighbors protested for fear the exotic plants would hurt their livestock, but won in the end. He specifically chose plants of Japanese and Chinese origin to go in his pond, creating an Asian aesthetic likely inspired by his vast collection of Japanese woodblock prints. He planted bamboo and plum trees around it and built the now famous bridge, adorning it with wisteria. And of course, he filled the pond with lilies, employing a gardener just to dust them off every day and arrange them in attractive positions in relation to each other. If you aren't employing a lily duster, what are you even doing? 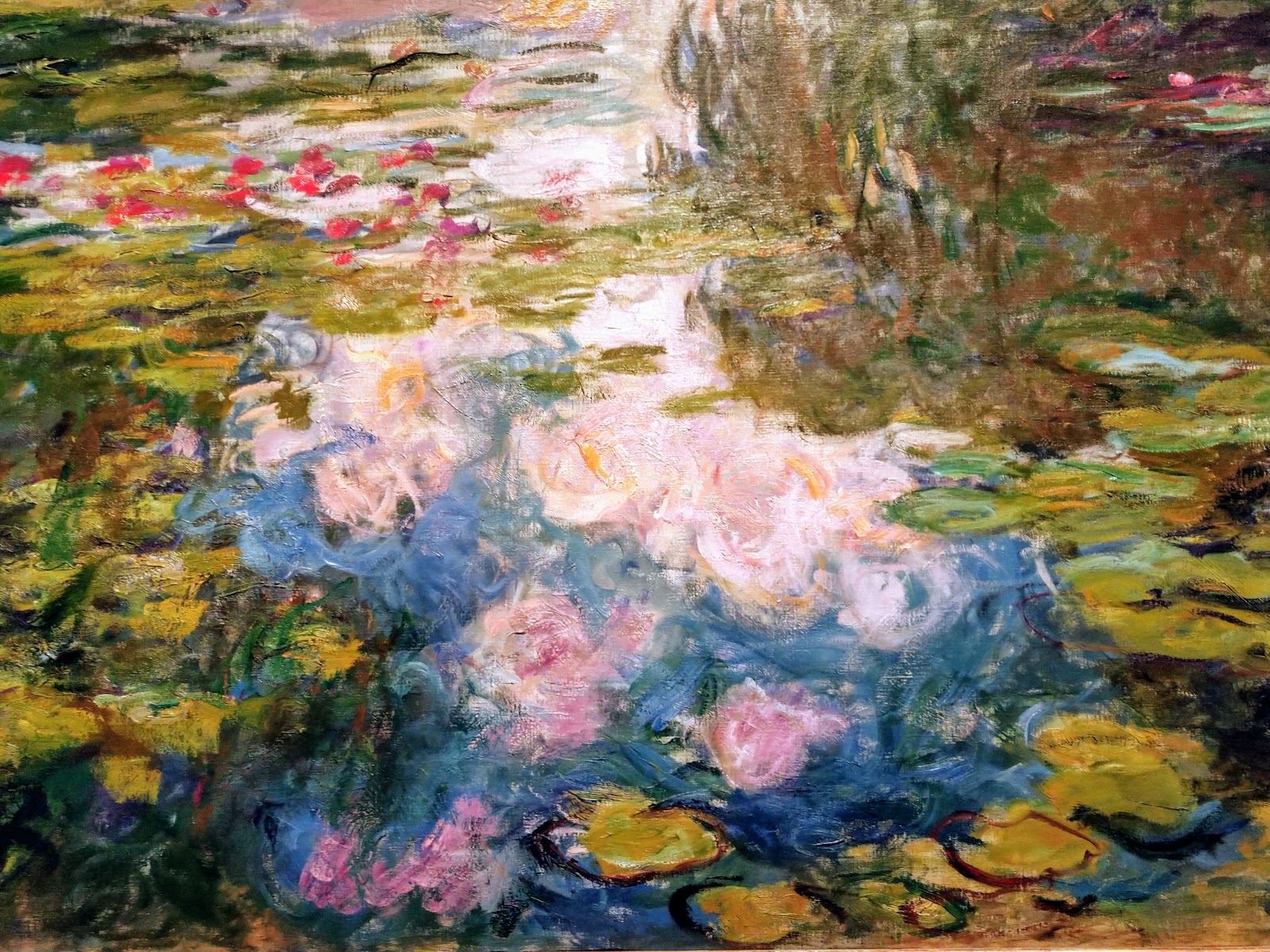 The exhibit contains two enormous rooms dedicated to these waterlilies, with many stunning grand canvases on loan from such places as the Saint Louis Art Museum and the Marmottan Monet Museum. These lilies are where we start seeing Monet break new ground in territory never previously covered by painters. He plays with the tensions of up and down, surface and depth, sometimes allowing paint to pile up in layers that themselves evoke recession into space, before allowing a single stroke denoting a further-away object to contradict your spatial reasoning. Furthermore, he tilts the canvas up, removing all reference points for the viewer, who can no longer see the shore or bridge, pulling the ground out from under us and leaving us wondering, “Where are we? What is our point of view? Are we in the pond, among the reflections and weeds?”

Basically what it feels like to stand in front of these paintings.

No one had ever eliminated reference points to this extent before, except perhaps photographers, so this was truly revolutionary. It wasn’t enough for Monet to just create the Impressionist movement, he had to go and do yet another revolutionary thing!  And from here, I’m just going to say it, things start to get funky. “THIS is Monet???” you may find yourself saying. 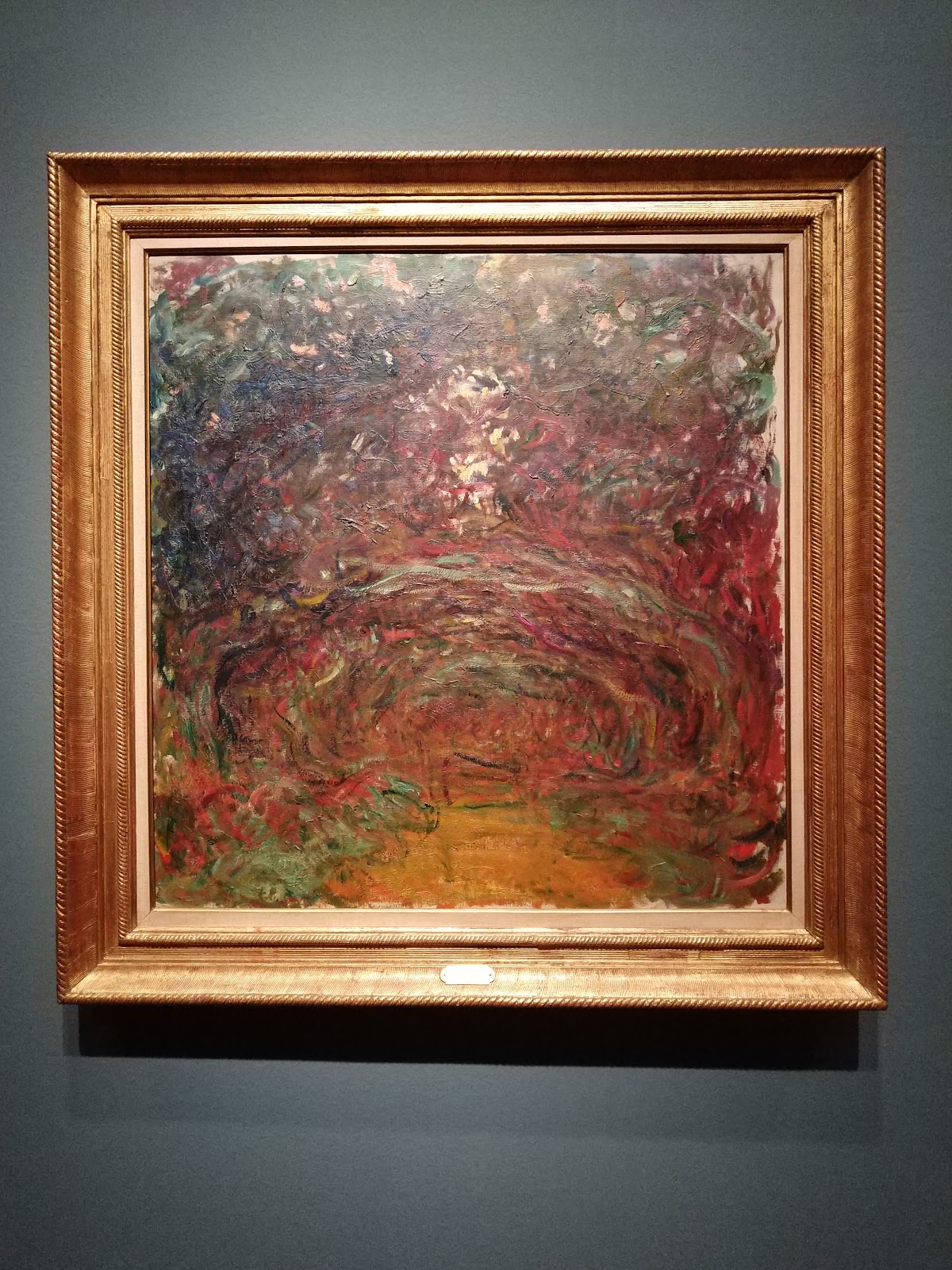 His last decade or so was marked by a number of tragedies. At this point, he has outlived the members of the impressionist circle. His second wife, Alice Hoschedé, has been dead since 1911, and his eldest son, Jean, since 1914. His vision is being marred by cataracts, and the first World War has shattered the world as he knew it. The artwork produced during this time is shocking. Yes, the subject matter is still his garden, but there is a radical departure from his previous works. Form itself starts to dissolve, leaving the viewer with an image so abstract it becomes pure sensory experience, almost along the lines of Ellsworth Kelly or Joan Mitchell. In fact, it coincides with the birth of abstract painting in other parts of Europe. Something about that first World War just necessitated abstraction, which is often thought of as a sort of coping method to deal with the trauma it inflicted, for Kandinsky and co. but quite possibly for Monet, too, whose home was close to the front lines. 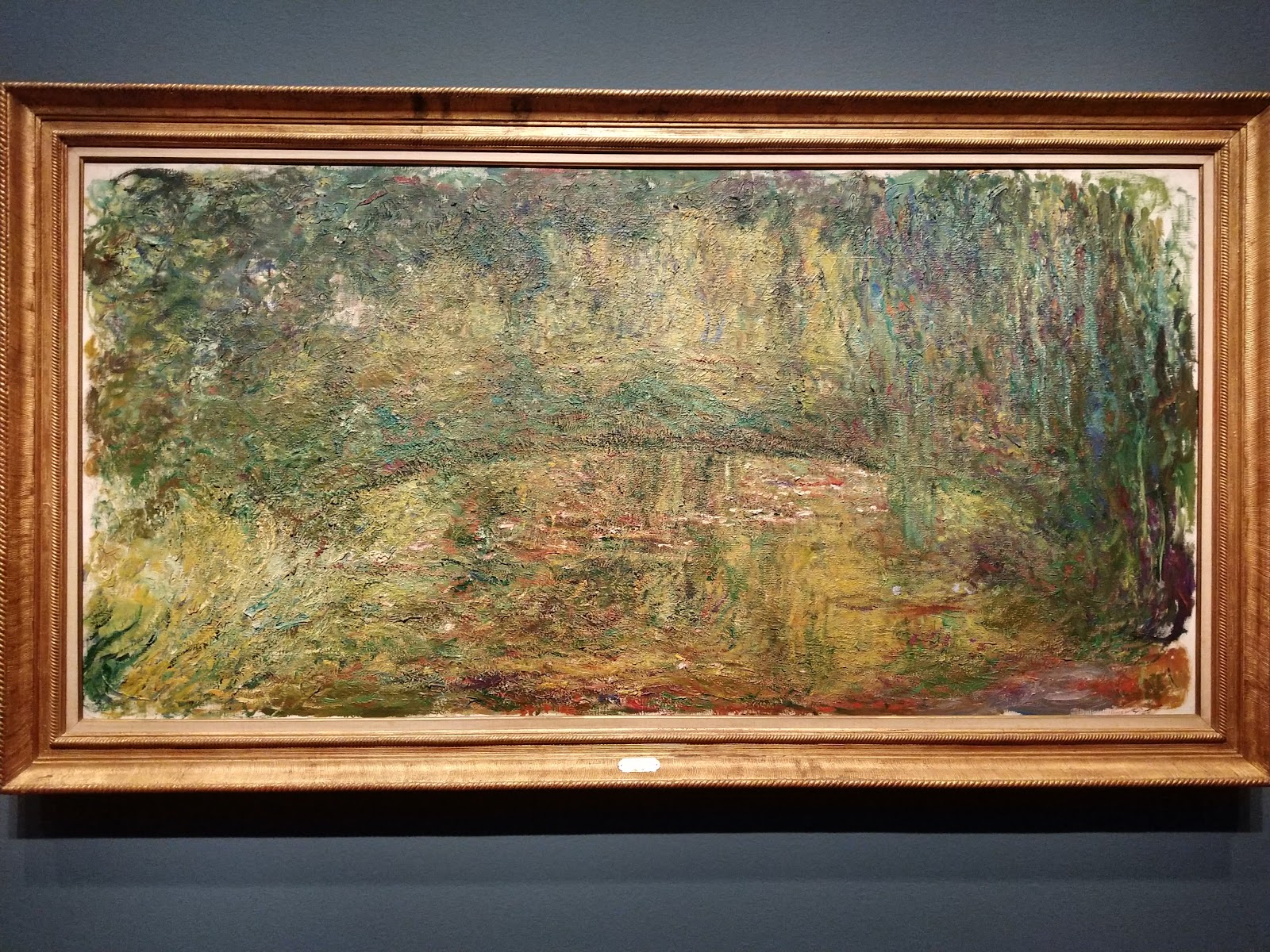 There’s a temptation to dismiss the radical works Monet produced in this time as the product of his vision difficulties, just like all those people who say that you can really tell Beethoven was deaf when he wrote his ninth symphony. It’s a way to not have to confront the challenges the work presents. And while it’s true that those cataracts did alter Monet’s perception of color, the curators of this lovingly-organized show work hard to demonstrate that Monet carefully arranged his paints on his palette so that he knew what colors he was using when, that his brushstrokes and choices were deliberate and thoughtful, and that maybe Monet doesn’t have to fit into that little late-19th century box we’ve stuffed him into. Maybe he was tackling new ground even in the relative isolation of his twilight years. He was still forging ahead even after he created his grand murals of waterlilies as a gift to the people of France, continually reinventing himself.

While the large number of waterlily paintings may admittedly get on some people’s nerves, if you let yourself float into the repetition, the differences will appear, shimmering and mesmerizing, as if a key into unlocking the artist’s meditations. The long galleries of the De Young allow these works to be displayed to their best advantage, and as you turn around in a room full of waterlilies, you’ll feel as if you yourself are in the pond. My only complaint of the show is that it barely addresses the rise of abstraction elsewhere and what exposure Monet may have had to it. (Although it does indeed mention that he detested cubism, and that he wouldn't even look upon it because “it would only make [him] angry.”) 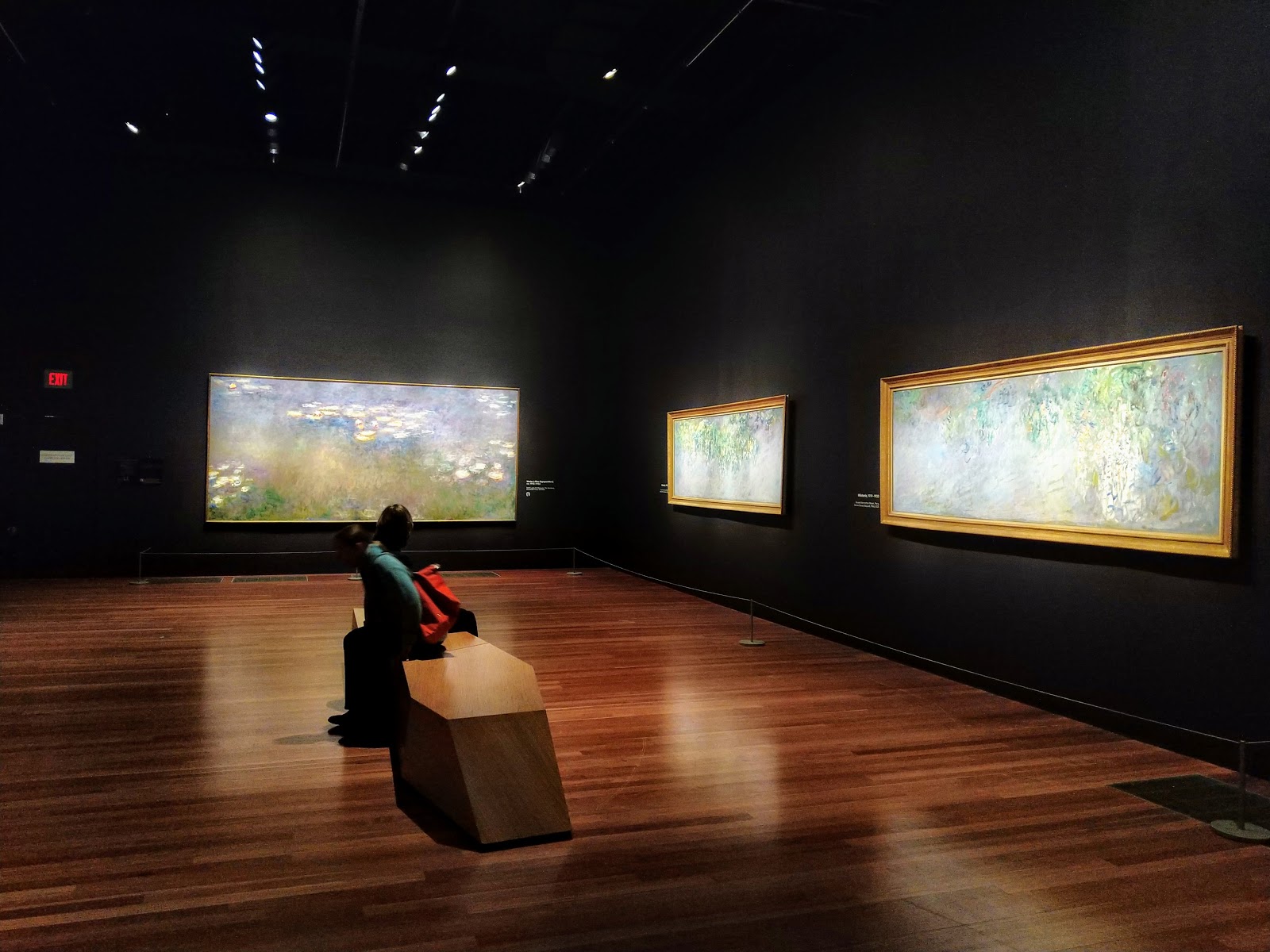 Ultimately, the show is a surprising and wonderful investigation of an indomitable artist working despite many setbacks and creating something wildly new even in his waning years. If you can’t make it to Paris any time soon to see the L’Orangerie Museum or the Marmottan Monet Museum, this is the next best thing. Monet’s garden seems to come alive as his model and mistress, lush, breathing, and quivering with every drip of paint, as we follow him in his quest of the elusive views that will make his heart soar even in the face of tragedy.

The show is a triumph. Also, it’s really, really pretty.

“Monet: The Late Years” runs at the De Young through May 27, 2019, before heading the Kimbell Art Museum in Fort Worth. More information can be found here.