Trade Money for Monet at the Legion of Honor NOW!

Claude Monet is one of those names that transcends knowledge of art history. He’s among the ranks of artistic gods like Warhol, Rubens, or Kahlo – names near inseparable from the idea of art itself. With Monet: The Early Years, the Legion of Honor in San Francisco has teamed up with the Kimbell Art Museum in Fort Worth, Texas to show a side of Monet that’s rarely given notice. That is, a cache of Monet’s paintings created prior to superstardom.

Monet: The Early Years gives visitors the chance to track the artist’s growth during his formative years between 1858 and 1872. While plenty of what’s on view offers impressions of his Impressionist future, the emphasis is on the paintings that lay the groundwork.

Honestly, the show is what should be expected from two world-class institutions working diligently to offer a unique take on an artist who has been so thoroughly explored. The show’s amazing, the art’s beautiful, and based on that alone you should get your tickets N-O-W before you lose your chance. Sure, it might seem like the run is a long time (February 25 - May 29), but like all blockbuster shows, waiting until the last week to see it is a bad idea.

What you need to know beforehand, though, is which pieces to linger over and why. This exhibition is going to be a battlefield. Unless you’re there at 9:30 AM, the galleries are going to be packed. I swear, I got mean mugged and thrice elbowed at the press preview. Truth: A journalist got yelled at to put their phone away by another guest like the former were about to fling a cup of coffee at the painting. All I’m trying to get at is, Monet gets people’s blood going. Even his less famous pieces feel kind of sacrosanct.

As such, we’ve decided to be benevolent and offer a partial list of paintings you need to see so you have a chance at, bare minimum, getting a look at all the highlights. 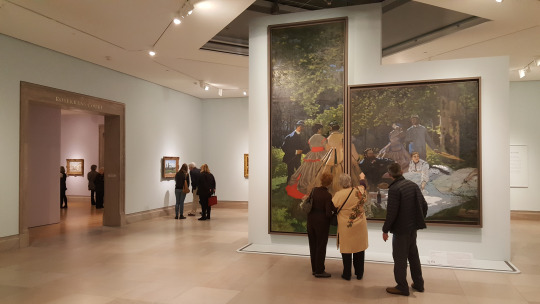 Luncheon on the Grass is a supersized remix of Édouard Manet’s infamous Luncheon from several years earlier. Monet included his wife, Camille, as well as depictions of his buddies Frederick Bazille and Gustave Courbet. The reason you need to see it is because it’s literally the only thing you notice while descending the walkway into the exhibition. Originally, Monet’s Luncheon was going to be a submission to the Salon, but the submission deadline passed before Claude could finish. Instead, he offered it as rent to his landlord. Monet eventually bought the painting back, but it had been left rolled up and unattended for so long that large sections had been destroyed by mildew. Monet cut off mildewy bits. What’s on view is all that remains. 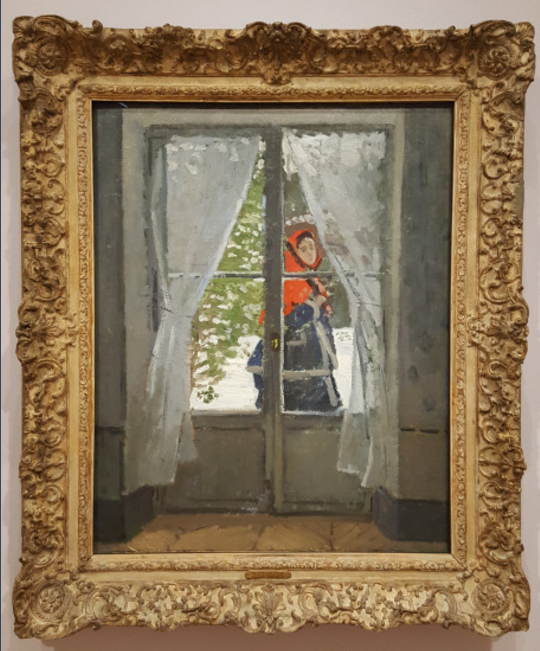 This Silent Hill inspired gem is a portrait of Claude’s wife Camille as they’re traveling about France in search of a permanent home. Monet and Camille weren’t exactly financially solvent throughout the early years of their marriage. Camille signed on for the adventure of being Mrs. Monet anyway and stuck it out with him through the hard times. If this painting is any indication, those hard times included having her eyes pop out like she’s one of the ghosts in Beetlejuice. 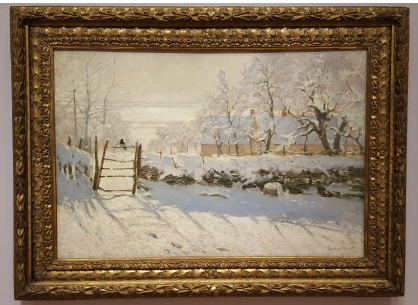 The Magpie by Claude Monet at the Musee d’Orsay

This one… is just gorgeous. The texturing on the snow beneath the gate is really incredible to look at up close. Seriously, The Magpie is one of the best parts of the whole exhibition. And if you don’t believe me, you just need to consult all of the people who visit the gift shop at it’s home museum in Paris. According to the Orsay, The Magpie is their #1 bestselling postcard. So, be original and send us a postcard of Origin of the World instead. 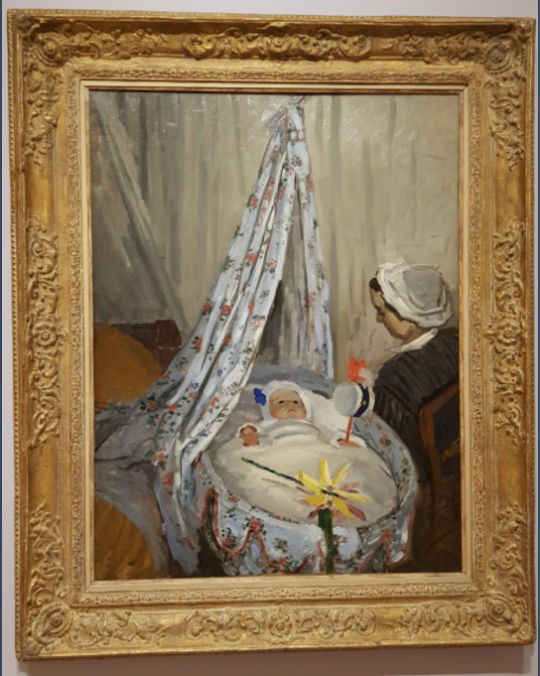 The Cradle by Claude Monet at the National Gallery of Art

The story behind this is cute enough. Apparently, Papa Claude wanted to shine a light on just how wonderful he thought his baby Jean was. There’s a pinwheel, and Camille looks on with love. The curator giving our tour was keen to emphasize Monet’s attention to deets with that cloth over the eponymous cradle. But, just… Good God, that baby is horrifying. 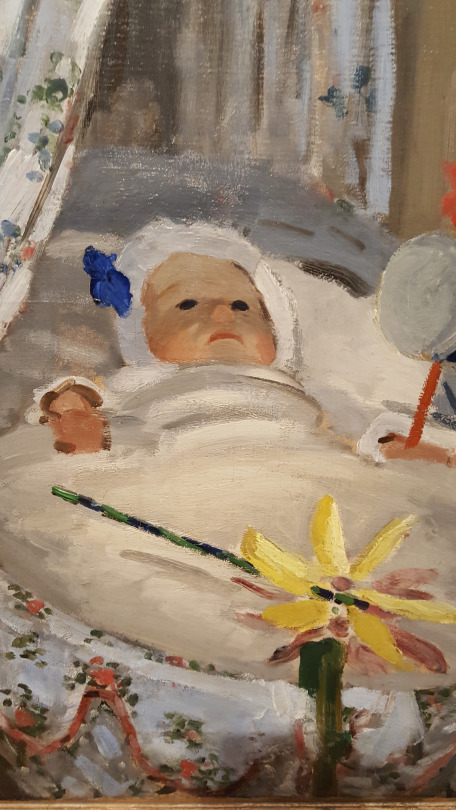 It looks like the devil. It’s totally giving me a Rosemary’s Baby vibe. All I want to do now is cry out, “WHAT HAVE YOU DONE TO ITS EYES?!” 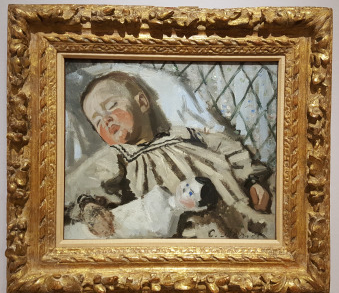 Immediately to the right of The Cradle is another picture of Jean. The boy’s a little older, and Claude has found another way to make his son look terrible for the ages. But, it seems Monet inadvertently traded a movie monster for a real life one. Just, look at the doll a little closer. 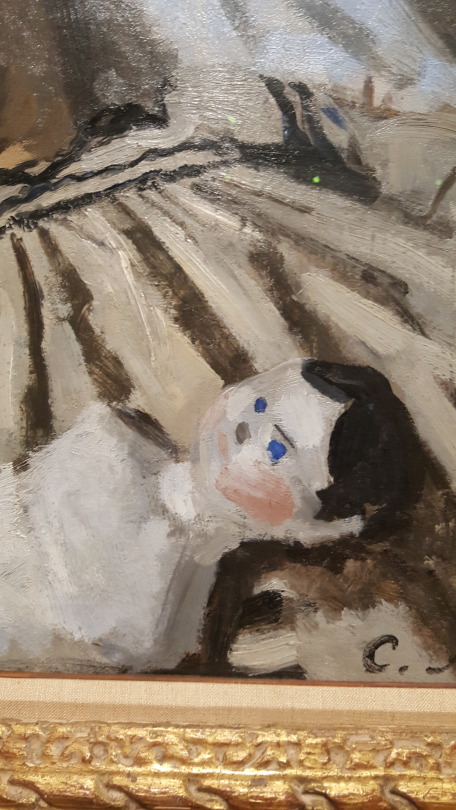 Is that Hitler? I mean, c’mon. That’s got to be a Hitler doll. That haircut, blue eyes, a HITLER MUSTACHE, and bad guy eyebrows? There’s got to be something here, folks.

At some point, we have to cut this off. There are about 50 works on display across the exhibition galleries. They all have an individual story and play a role in the greater narrative of Monet’s life. Before you go, have a look at the Digital Stories section of the Legion’s webpage for the exhibition. It has a lot of info that’ll help you appreciate the artworks and what each meant for Monet at the time he was making it.

Again, you must make time to see this show as early as possible. After May 29th, many of these paintings will be returned to their homes in museums, galleries, and private collections across the world. This may very well be your only chance to see these paintings displayed together. People will catch on to how cool this opportunity is, and all the tickets will evaporate shortly thereafter.

Be sure to tag us on any photos from the exhibition you put on Twitter with @sartle or to Instagram with @sartle.arthistory! We’d love to see them.

Text and photos by: Clayton