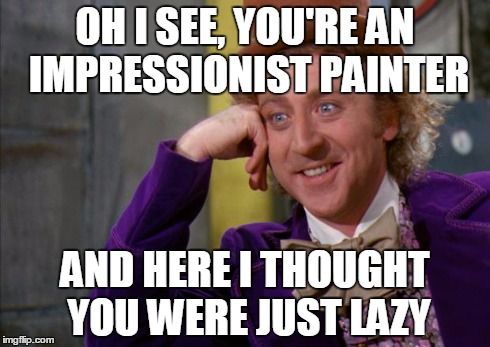 Impressionism at a Glance: You Mean Those Smudges Are Intentional?

Flowers, street scenes, and prostitutes; Impressionism has truly got it all. But were these guys just a bunch of hacks, or is there more to all of this? One of the most rebellious movements in Western art history, the Impressionists were pretty radical for their time. They broke all the rules and pissed a lot of people off, and for that, we thank them.

Impressionism might best be described as the nineteenth-century French interpretation of Buddhism – it’s all about being in the moment, man. By the 1860s, the Royal Academy of Painting and Sculpture had dominated the French art scene for more than 200 years. This institution effectively regulated all of the art production in the nation. Bossy, much? The Academy enforced rules such as the schools that artists could attend (their schools), the way they should paint (naturalistically), what they should be painting (mythology), and where to exhibit their works (the Salons). This resulted in a lot of paintings that basically all looked alike, and as you can imagine, the more forward-thinking artists of the time were getting tired of it. Inspired by the OG rebel Gustave Courbet who painted from reality instead of Classical myths, Impressionists set out to depict the rapidly-changing, modern Paris that they knew and loved because all that old stuff had become boring and irrelevant. These guys painted their way into our hearts and have become some of the most well-known artists of all time. 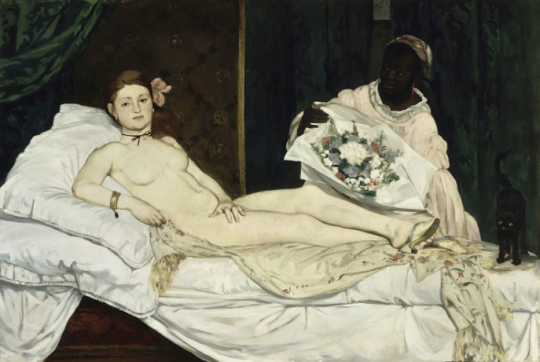 Olympia by Édouard Manet, in the Orsay Museum.

Édouard Manet was the first artist to stir up Impressionist drama. His Luncheon on the Grass was denied from the official Salon and, instead, was featured in the 1863 Salon des Refusés, which literally translates to “exhibition of rejects.” Two years later, one of Manet’s works finally made it into the official Salon exhibition, but that didn’t mean it played by the rules any more than the earlier Luncheon on the Grass did. In fact, Olympia shocked and offended pretty much everyone in attendance. Although this work took cues from Titian’s Venus of Urbino, there are some choice details that make this picture uniquely modern. No longer slavishly committed to the gods and goddesses of Classical mythology, Manet was free to paint what really mattered to him: prostitutes! The new urban environment of Paris created a demand for prostitution, and this reality that was all too familiar to the artist, as well as to the exhibition’s judges and the other “gentlemen” who frequented the Salons. They just weren’t expecting such a recognizable face to be staring back at them from the walls of the hallowed exhibition. This daring inclusion began a long line of offensive art, in terms of both subject matter and the way things were painted. 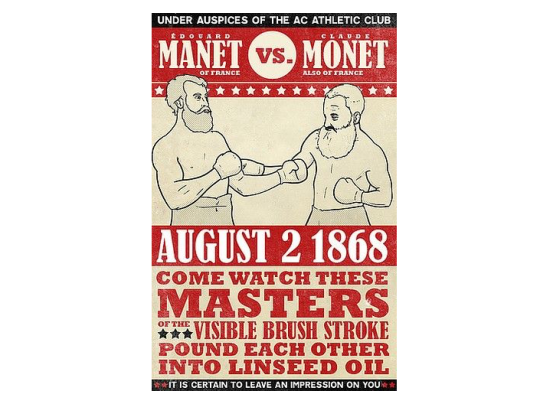 During the second half of the nineteenth-century, Paris transformed into a bustling, urban metropolis. Modernity was on everyone’s mind, and after Manet’s early paintings, this idea creeped into the works of other artists like Claude Monet, who really changed the painting game. This radically new subject matter called for a new way to paint. Manet began these changes by producing images that looked extremely flat, but Monet took it to the next level. 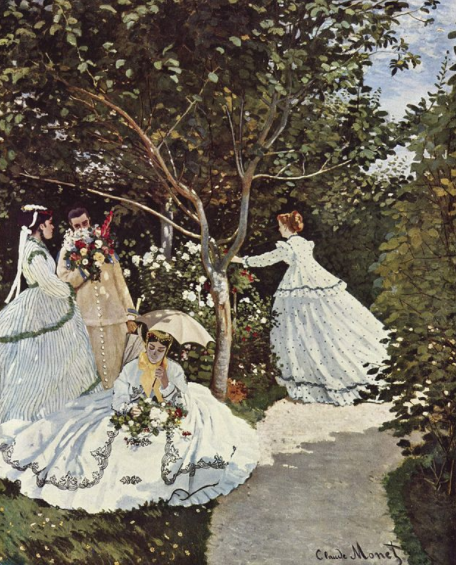 Women in the Garden by Claude Monet, in the Orsay Museum.

In addition to modern subject matter, the visible brushstroke is a landmark feature of Impressionism. You can start to see the beginnings of this in Manet’s work, but what we now call “painterly” brushstrokes really materialized in Monet’s painting. Monet and painting must have gotten into a fight because, in 1866, he asked, “Hey, you wanna take this outside?”

For Women in the Garden, Monet decided to paint entirely outdoors, rather than make a sketch outdoors and then a finished product in the studio, for the first time. This would have been quite a sight; this painting is over 8 feet tall and over 6 feet wide, and poor Monet had to dig a trench in the ground in front of where he was painting so that he could lower the canvas down into the ground to produce the entire image. This sort of undertaking was important to Monet because one of his goals was to capture light, shadow, and color as they truly appeared in nature, and this painting was just the beginning of Monet’s obsession with the great outdoors. 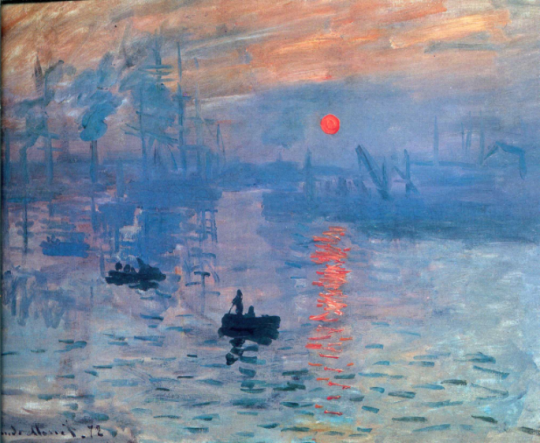 Impression, Sunrise by Claude Monet, in the Museum of Marmottan Monet

The movement officially got its name in 1874 when Monet painted Impression, Sunrise. When the Impressionists had finally had enough with being considered the rejects of the official Salon, they decided to hold their own exhibitions. This was one of the works exhibited in the first Impressionist exhibition in 1874. It showcases Monet’s classic visible brushstrokes, and when you look at this painting, you start to realize that your brain understands those little smears and daubs of color as people, boats, and parts of the water. Pretty sweet. The idea of using color to depict atmosphere and time of day would become central to later Impressionist practice. At the time, however, critics hated the painting’s sketchy appearance. One Debbie Downer went so far as to call it merely an impression of a sunrise. The group ran with the title and called themselves the Impressionists. Despite getting a lot of heat for this work, artists loved and admired this nearly abstracted approach to painting.

The Impressionists were all bros who hung out on the reg. They would paint together and exchange ideas, all the while competing about who could be the most edgy, modern painter in Paris. Capturing impressions of what they were experiencing in the moment of painting became a shared goal, and many Impressionists focused on scenes of daily, Parisian life. 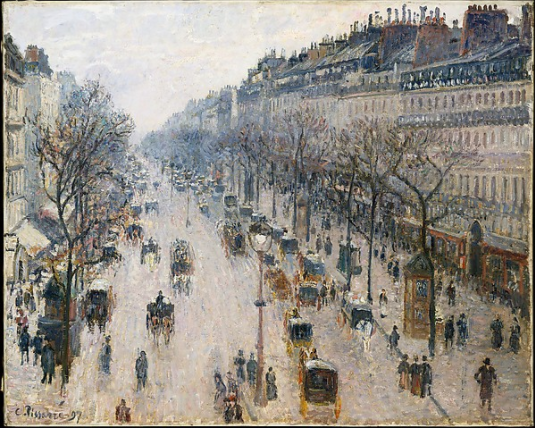 The Boulevard Montmartre on a Winter Morning by Camille Pissarro, in The Metropolitan Museum of Art

In many Impressionist works, what you see is what you get. This work by Camille Pissarro shows you exactly what the title says it will and is an ode to the fleeting nature of experience. Monet, who was pretty much the mastermind behind all things Impressionist, had begun painting the same things over and over again at different times of the day and in different types of weather in the 1890s. This demonstrated that the same objects and settings took on different qualities when viewed under various conditions. Pretty genius if you ask me. Pissarro broached this idea in the series where this wintry scene of the Boulevard Montmartre, one of the trendiest streets for Parisian artists, comes from. Renoir rented a hotel room with the view we see in this painting so that he could creep on the passersby at his leisure and paint the scene whenever he wanted. 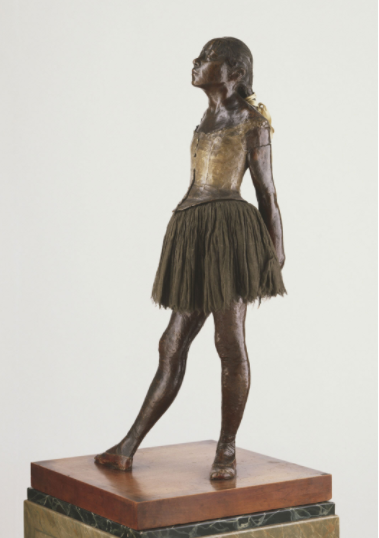 Little Dancer, Aged Fourteen by Edgar Degas, in the Philadelphia Museum of Art

Edgar Degas was also a creep but in a much more direct way. Like the other Impressionists, he was interested in capturing an image of the moment he was experiencing and found an outlet for this mode of expression when he began attending young girls’ ballet rehearsals. The model for this sculpture was a (you guessed it) fourteen-year-old girl named Marie, whom Degas studied both clothed and nude (!!!) for this sculpture. This work is a bronze cast of a wax original that was even more creepy in that it featured real human hair in addition to the tulle skirt and silk hair ribbon that we see on this copy. 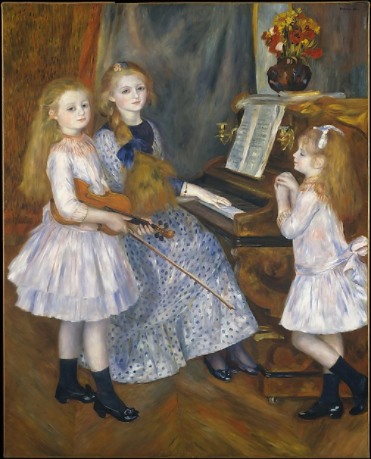 Pierre-Auguste Renoir was another guy in the gang, and many of his paintings feature oddly glowing women and children. He was an Impressionist in that he adds weird colors where they don’t belong; you can see this technique in the girls’ dresses in this painting, which was a flop at the Salon. Unlike his fellow Impressionists, Renoir wasn’t rich, so he had to make money by selling his art. Can you tell that I don’t particularly care for Renoir? 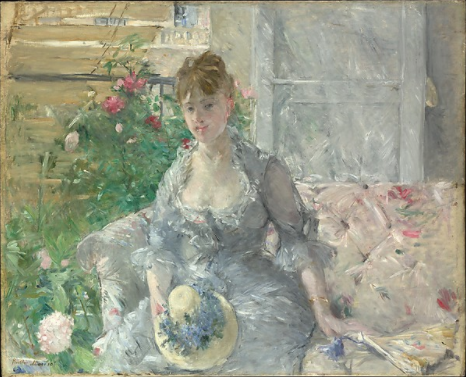 Young Woman Seated on a Sofa by Berthe Morisot, in The Metropolitan Museum of Art

This article has probably done a good job of making you think that only guys were Impressionists. This was mostly true, as there are really only two memorable female Impressionists: Berthe Morisot and Mary Cassatt.

Society deemed that being an artist was not an appropriate profession for a lowly woman. A large part of being an Impressionist was being able to go out and wander the busy, city streets to take in all that could be experienced. Poet and essayist Charles Baudelaire coined a term for these people – the flâneur – even though they were just glorified hipsters. Women could not be flâneurs because they didn’t have the freedom to wander around town unaccompanied by a chaperone. Despite the odds, these two ladies prevailed thanks to their own wealth and help from male artists. They were allowed to paint professionally, but their subject matter was largely restricted to domestic settings and scenes of motherhood because of their gender.

Well, that just about concludes this art history lesson on the haves and have-nots (looking at you, Renoir) of Impressionism. Who knew that smudges could be so meaningful? And remember: 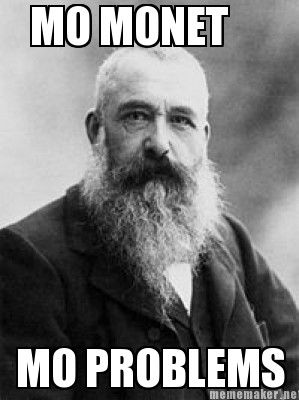