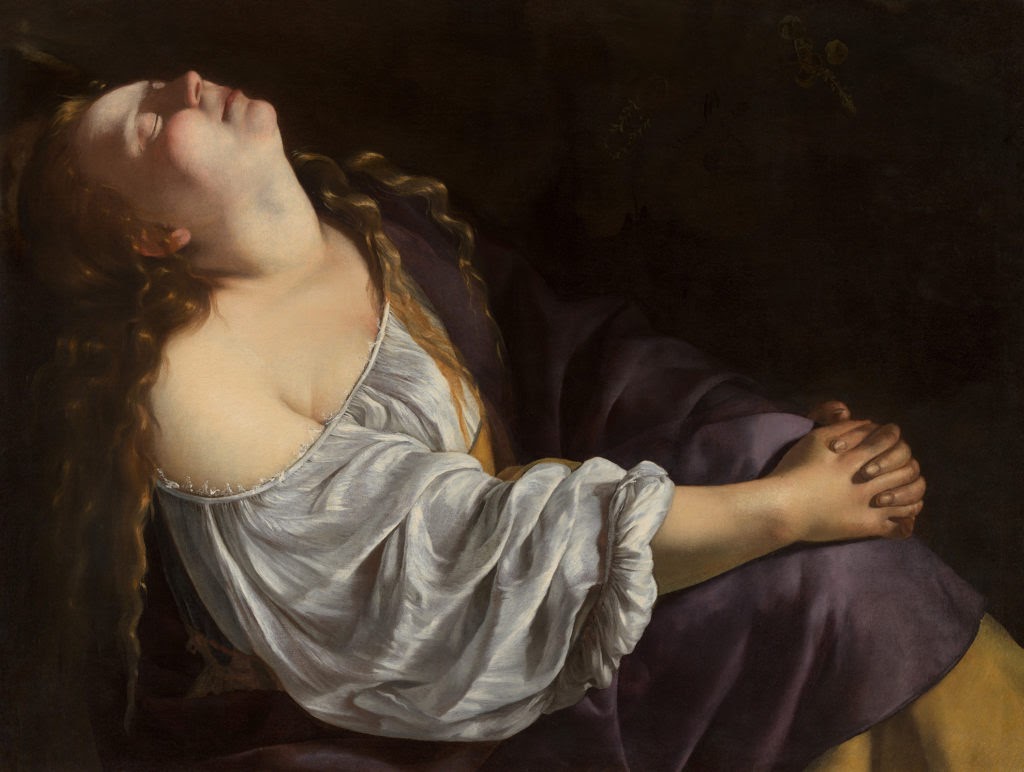 Women are one of the most recurrent subjects in painting. Many of us have had some sort of encounter with this genre of art, whether that be in a museum, movies, or online; images of reclining nudes, bejeweled monarchs, or color-splashed celebrities are present in most forms of media. That said, we hardly ever see depictions of women on the other side of the canvas. For as much as we might encounter the work of Picasso or Pollock (whether we realize it or not), we all too often overlook the equally talented women contemporaries - who also happened to be their wives much of the time (funny how that works). Considering the exhaustive coverage of male painters in art history textbooks and popular culture alike, there are not enough times we can utter the names of women artists  instead. So, in this year, the 50th anniversary of art historian Linda Nochlin’s watershed 1971 essay, "Why Have There Been No Great Women Artists?", it seems fitting to consider some of history’s greatest women painters.

Nochlin observes that within the western canon of art there exists a generally unchallenged hierarchy of artists, organized through a logic in which men possess distinct privileges that locate their authority and significance above that of women – in her essay, Nochlin writes that this is understood as “the natural order of things.” This gendered asymmetry both constitutes and is reconstituted by the “myth of the great artist” in which the figure of the genius artist is coded as male and white. For Nochlin, this narrative lays the ground work for the erasure of women artists because it disavows the significance of the white supremacist and patriarchal structures that afford male artists extensive liberties in the art world, to which women do not have the same access.

As Nochlin goes on to explain, there are a litany of reasons why women were historically (and still are today to some degree) excluded from art practices across various time periods and regions. For much of history, women were not permitted to pursue any kind of academic study at most art institutions. And later, once they were permitted to enroll in the academy, they were not allowed to study from nude models (which made honing their craft decidedly more challenging than for their male peers). What’s more, without the crucial social network the academy provided, women were seldom able to become members of artists guilds, and therefore had less access to highly visible commissions, such as for the church or affluent patrons. The most likely path to success for the early woman artist was to be born to an artist father and receive training in his workshop, but even then, the shadow of the famous father was not easy to escape. And as if the odds weren’t already stacked against them, women who married were expected to give up any professional interests in art in order to take care of their families and homes. As such, many (though not all) women artists tumbled into obscurity, forcibly positioned as outsiders.

In her essay, Nochlin wrestles with this erasure of women artists through a focused decoding of the institutionalized systems that have led to a decisive censorship of women ‘masters’ within the western canon of art. As she writes: “The fault lies not in our stars, our hormones, our menstrual cycles, or our empty internal spaces, but in our institutions and our education [...]” Nochlin goes on to explain that we must address this lack of representation through a feminist framework that positions women in a distinct outsider perspective. She argues that this affords us a critical distance by which women can occasion opportunities to subvert the very systems that subjugate them. Ultimately, Nochlin advocates for the dissident woman that leverages her outsider position to disrupt the institutional limitations that have precluded women throughout the history of art.

In the same spirit as Nochlin’s call to action, what follows is a (by no means exhaustive) list of significant women painters who we should all be familiar with:

Artemisia Gentileschi was an Italian painter active during the Baroque period in the 17th century. One of the most prolific artists of her time, Gentileschi learned to paint in the style of her elder contemporary Caravaggio. The Baroque era in painting was characterized by its dramatic subject matter and exaggerated contrast between light and shadow, a technique known as chiaroscuro. Both known for their skillful use of color, contrast and naturalism, Gentileschi and Caravaggio worked with common themes, such as biblical scenes, myths, and allegories. However, Gentileschi’s paintings had what we might interpret today as an intuitively feminist perspective. While in Caravaggio’s painting Judith Beheading Holofernes (1599-1602), Judith is depicted as meek, in Gentileschi’s interpretation Judith Slaying Holofernes (1612-1613), the biblical heroine is powerful, muscular, and decisive in her violent execution of Holofernes.

Born in the United States, Mary Cassatt was a painter and printmaker who spent most of her life in France. She was greatly influenced by the rise of Impressionism in Europe in the early 20th century, which aimed to express the impression of a moment, by prioritizing the visual effects of light and color, rather than simply depicting a moment in a realistic fashion. Cassatt pioneered a new kind of genre painting (“genre” refers to a type of painting that depict everyday life), which embraced the private domestic worlds of women and their children. Cassatt’s intimate paintings often featured upper-middle class mothers and children doing mundane activities, such as in Mother About to Wash her Sleepy Child, 1880, the child’s restlessness is echoed in the artist’s flurry of brush marks.

Heralded for her intensely colored paintings of flowers, animal skulls, skyscrapers and desert landscapes, Georgia O’Keeffe is one of the more recognizable artists in this group of women painters. Highly-educated for a woman of her time, O’Keeffe made a place for herself in academia, studying at the Art Institute of Chicago, The Art Students League of New York, and later taught at the University of Virginia, Columbia College in South Carolina and later chaired the art department at Texas State Normal College. Though her flower paintings are often interpreted as sexual imagery, O’Keeffe has frequently rejected these analyses, claiming they are simply depictions of flowers. Taking cues from Dutch Vanitas - symbolic paintings inspired by the fleetingness of life and certainty of death - O’Keeffe’s Cow’s Skull with Calico Roses (1931) is deeply invested with symbolism pertaining to mortality.

Frida Kahlo was an internationally-renowned Mexican painter, known for her semi-surrealist self-portraits that incorporated the imagery of her native Mexico. A politically-engaged woman, her work spoke to issues of gender, class, race, and identity. As was typical of her paintings, like in The Two Fridas (1939), Kahlo’s work was frequently autobiographical, combining both realistic and magical elements, like the exposed hearts, one damaged, and their connected artery, stymied by a pair of medical pincers, in this famous work. Heavily symbolic, her fantastical paintings carry deeper meanings, often regarding her experiences with pain, both physical and emotional. As a child Kahlo suffered from polio and then later was involved in a bus accident that left her with chronic pain. This striking double portrait was created soon after Kahlo’s separation from her husband Diego Rivera (the famous Mexican muralist). In it one figure wears a modern dress and the other wears traditional Tehuana attire, which speaks to Kahlo’s psycho-social struggle with identity in post-colonial Mexico.

A hallmark of Agnes Martin’s paintings and drawings is their precise and analytical execution. Early in her career, Martin developed a signature style that would inform her work for the rest of her life: she exclusively worked on surfaces that were six by six feet (approximately the wing-span of her arms) and painted her canvases from edge to edge with penciled grids, pre-measured, before finishing the work with a transparent layer of gesso. Her work expanded on abstraction and minimalism (two coinciding artistic movements both at their peak during the height of Martin’s career). Moreover, Martin’s style was informed by her spiritually, referencing Buddhism and American Transcendentalism and other spiritual theories, like this work Falling Blue (1963), Martin’s style was quiet and meditative. After a series of personal struggles with mental illness and the death of a close artist friend, Martin returned to Taos and abandoned painting for almost a decade, but returned in the seventies with a shift in style that embraced color and geometry that encapsulated her beloved desert landscape.

Faith Ringgold is celebrated for her colorfully painted quilts, although her artistic practice encompasses varied media such as sculpture, painting, performance, and writing. Inspired by Cubism, African art, the writing of James Baldwin and her childhood during the Harlem Renaissance, much of Ringgold’s paintings focuses on institutionalized racism in American culture. Though her early work received critical attention, they were not very commercially successful as both galleries and collectors were uncomfortable with the political content of her paintings. However, Ringgold’s subject matter and style flourished during the Women’s and Civil Rights movements. The later work Church Picnic Story Quilt, (1988) is exemplary of her mature “story-telling” approach to art – a geometric quilt, featuring a painted narrative with illustrative figures engaged in this intergenerational community activity, told form a personal and feminist perspective.

Although the institutions that dictate visibility have caused women, especially women of color, to be made invisible both in their experiences as cultural producers and cultural consumers, these same structures consequently reveal what is distinctly remarkable about women artists, thinkers, and spectators: they manage to exist, persist and enact critical interventions in liminal spaces, regardless of the continued patriarchal insistence that women’s contributions and experiences bring little to bare upon the constitution of western culture.

For further reading, here’s a more expansive list of women artists and key works of art throughout history:

Rosa Bonheur, Ploughing in the Nevers, 1849

Mickalene Thomas, A Little Taste Outside of Love, 2007

I would love to see this in book form.

Great topic! Thank you for sharing. I like art.