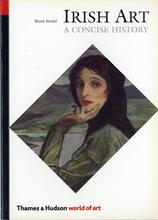 To the Irish public, Jellett’s return to her home country of Ireland stunk of elitism , and they weren’t having any of it. Fresh from her studies in Paris, Jellett presented her work in Ireland for the first time in 1923. This was her big break, the chance to show her home country what she was made of and to distinguish herself from her earlier work. Jellett made a splash, but probably not the kind of artistic splash she was hoping for. Notably, The Irish Times compared Decoration to an onion. Another critic preferred to dub her work “sub-human art that we hope would not put away the Irish public.” Others said it reeked of "artistic malaria" and bacteria. But any publicity is good publicity, eh?

In 1923, the irish art world was all amped up about creating their own national artistic identity. Freshly a free independent state, the public was grappling with questions of national identity and how they would present themselves on the public stage. In the 20s, cubism was no longer at the forefront of the avant-garde, but it was still evidently too much for Ireland to stomach. At this time, the Irish public wanted to take a more traditional, religious-focused approach, and the public saw little merit in modernism and cubism. Jellett’s modernism was the bacteria on their clean new identity.

Like many of her works, Decoration starts with a central geometric shape around which other shapes ripple out in a rhythm of color and line. What critics completely failed to notice were its religious undertones, the pentagonal shape as well as choice of hues evoking traditional Madonna and child imagery from the Renaissance.

As it turns out, the backlash from her home country wasn’t a universal phenomenon and Decoration was lauded with respect from showings across europe. Jellett exhibited in 1925 in Paris  and Brussels to critical acclaim. She was since sought after to host workshops and speak about cubism into the 1920s and 30s. Towards the end of her life she eventually gained recognition and a degree of praise from Ireland; though some haters maintained that she was just a cubist wannabe. Jellett passed away in 1944, barely reaching middle-age. Now she’s a bona-fide Irish icon, the dame that brought modernism to the independent young nation of Ireland.

The colors on this piece are great, love how they're stacked.

Artwork and all modern movements are fit for critique, but on this one I will refrain.

Decoration is mentioned on our blog -