Like most people, I love a good conspiracy theory. And one of my favorites is the death of Andy Warhol muse Marilyn Monroe.

Whether you believe she OD'ed or that a Kennedy was involved, the event is one of the most talked about and widely debated deaths of any celebrity, by far.

Her body was discovered by her psychiatrist, of all people, in her home in Brentwood, California in 1962. The death was making headlines back then, but this silkscreened image was a way for her to live on forever. And it certainly doesn't seem like people are going to forget about her anytime soon. The now infamous portrait was also a way for Warhol to say a little something about America's obsession with celebrities.

Warhol grew up attending an Eastern Catholic church in Pittsburgh, Pennsylvania, and if you have ever been to one, you'll know there are a lot of golden Jesuses on the walls. Like, a lot. So maybe this was a little inspiration for painting the background gold, commemorating the actress as martyred Saint Marilyn.

Warhol had many silkscreens of Monroe, but this is the only one where he uses color in her actual image. The piece reduces Marilyn to her basic shapes: eyes, lips, hair, making her shallow and glossy, just like a tabloid rag. Celebrities and public personas can be made and bought like canned soup. Remember boy bands? Or "The Real World" on MTV? Me either.

MTV caught and ran with Warhol's idea of people getting their 15 minutes of fame. Yep, that was him. This guy was into being famous and partying with the popular kids. I bet if Andy Warhol were alive today, he'd silkscreening pictures of Kim Kardashian. Like we don't see enough of her already.

I would give this piece a 4/5 stars. I love the size that the artist made Marilyn Monroe in contrast to all the gold color. I think the gold is a symbol of how important of a person that Marilyn Monroe was. Gold is usually used in paintings to symbolize royalty or purity. Marilyn Monroe herself said, "I don't stop when I'm tired. I stop when I'm done." I relate that to this work because she never gave up on anything, and the artist here did an amazing job at making this piece look amazing and well crafted.

Gold Marilyn Monroe is mentioned on our blog -

25 Amazing Ideas for Art History Halloween Costumes
If you're still unsure about your Halloween costume, let us give you 25 ( plus a few extra) new… 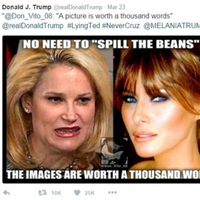 Battle of the First Ladies!
Amidst GOP debates on hand to penis size ratio (in other worlds, who has the biggest weenie), last…
Sign up
Forgot Password