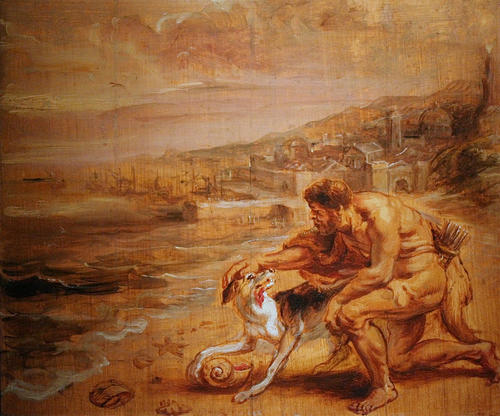 Purple Reign: The Rise and Fall of the Purple Empire

Purple is royal. Purple is bruising. Purple is galactic, dreamy, and mysterious. In "The Color Purple," Alice Walker wrote that Purple “is always a surprise but is found everywhere in nature.” I can’t help but agree with Shug when she says, “I think it pisses God off if you walk by the color purple in the field and you don’t notice it.” It is amethysts, lavender, eggplants, jacarandas, plums, violets, and squid ink. Purple tastes like grape, feels like velvet, smells like lavender, looks like clouds, sounds like Prince and Jimi Hendrix. Purple is a secondary color sandwiched between Red and Blue. It is complementary with Yellow. Purple is subjective and personal; rather than buying it, most artists mix their own. In that way, Purple is very individualistic. Appropriately, there are only two words in English that rhyme with Purple: "hirple," meaning to walk with a limp, and "curple," meaning the hindquarters of a horse (I challenge you to use these rhymes in a poem). So it makes for poor poetry, but how do we define Purple?

In the immortal words of Prince, “When there’s blood in the sky… Red and Blue equal Purple.” Purple itself has always been a very fluid term. It is often described better by what it is not. It’s easy to say that Purple obviously is not Red and Purple is not Blue. Purple is Red but different. Purple is Blue but ruined. Kandinsky once described Purple as “Red withdrawn by the humanity of Blue”. Linguistically it has often been subordinate to larger color categories such as Red, Blue, and even Black. It doesn’t even have its own Greek or Latin root. Porphyra and Purpura are also used to describe deep Crimson shades such as the color of blood. Purpura was described in the 3rd century by Roman jurist Ulpia as anything Red that was not dyed with coccus or carmine. So when you think about it conceptually, Purple is Red, Purple is Blue.

Which brings us to Violet. How do we distinguish Purple? According to ROYGBIV, Violet is not Purple. If Purple is conceptual then Violet is literal. Those famous art-world rebels, the Impressionists, believed that the old-school academic style of painting could not capture the reality of the world. Manet, supposedly suffering from ‘Violettomania,’ announced that he had discovered the true color of the atmosphere: “It is Violet. Fresh air is Violet. Three years from now, the whole world will work in Violet.” Violet is a color you see. Purple is a color you make. Violet is the very shortest spectral wavelength humans can see and Ultraviolet is imperceptible. Technically, Purple is not even part of the visual light color spectrum. Purple exists in culture and art, but not, in the same way that Violet does, in optics. Violet is perceived light, whereas Purple is mixed paint. (As an artist, this distinction hardly matters and Violet is very much Purple.)

So if Violet isn't Purple, what is it? The short answer: snail goo and pee.

How to make Tyrian Purple: start with 2 kinds of mollusks native to the Mediterranean: Thais haemastoma and Murex brandaris. You must crack open and milk your mollusks to extract the single drop of clear, garlic-scented liquid within. It will take 250,000 snails to produce 1 ounce of dye. To deepen the color to the desired almost-Black shade and get it to permeate cloth, place your snail juice into a vat of stale urine and allow to ferment for 10 days. Yuck.

How in the world did humans discover this absurd process? We didn’t. According to the ancient Greek mythographer Pollux, Hercules’ dog discovered the infamous Purple! The totally true story goes that one day Hercules was walking his dog along the beach, on his way to court a nymph named Tyro, when he noticed his dog had crunched a snail and his mouth had turned Purple! Upon seeing the Purple-mouthed pooch, Tyro demanded a dress of the same color and thus Tyrian dye was born. Many felt similar to Tyro and Tyrian Purple was highly sought after. Archeologists have found evidence of Tyrian dyeing as early as the fifteenth century BCE littered on the outskirts of towns (probably outcast due to the iconic smell of garlicky rotting snails and fermented urine). There are piles of discarded shells so large that they have become geographical features on the coast of the Mediterranean. Because of the difficulty of the labor needed to produce Tyrian Purple and the ever-decreasing availability of these mollusks, Tyrian Purple was exceedingly expensive – literally worth its weight in gold (and what goes better with Purple than Gold?).

Because of its scarcity, Tyrian Purple quickly became a symbol of status. In the Roman republic, it was reserved only for those of high rank and eventually became reserved for the Emperor alone. Anyone else caught wearing Purple could face death as a punishment. Upon seeing a woman wearing a purple dress, Emperor Nero famously stopped a recital to drag her off and strip her naked. Emperor Diocletian decreed that anyone could wear the color as long as they could afford to pay him an exorbitant Purple tax. Farther East, Byzantine queens gave birth in wine-dark rooms so that their offspring would be “born in Purple,” giving them the right to rule. In 1453, Constantinople fell to the Turks and the secret to making Tyrian Purple was lost. The hunt for Purple continued. If one could produce a Purple pigment, wealth was practically guaranteed. In 1856, the murex mollusk and its infamous purple were rediscovered by a French marine biologist but, much to the relief of the snails, this was the same year as the paint revolution!

In the mid-1800s, synthetic colors were suddenly being mass-produced. This, along with the invention of paint tubes, made the once-exclusive color Purple available to everyone everywhere at a reasonable price. With the availability of an affordable Purple came the “fall” of the once elite color. Purple was knocked from its pedestal and has since been rebranded. While still holding onto its historical associations, Purple returns its power to the people. In the 20th century, the gifting of purple flowers, an allusion to Sappho, became a secret gesture between queer women. By the 1960s, the color lavender had become synonymous with sapphic identity, feminism, and womanism. A favorite of little girls everywhere, Purple is often associated with magic and mystique. Purple is trippy and psychedelic. In “Purple Haze,” Jimi Hendrix sings: “Purple haze all around / Don't know if I'm coming up or down / Am I happy or in misery? Whatever it is, that girl put a spell on me.” Ultimately, Purple is Inspiring. Once a color reserved for the wealthy, it is now readily available for anyone to divine its purpose. Purple is what you make it. So make it!

I once had a horse who walked with a hirple

Due to girth of his majestic curple

Unable to ride him

I sat beside him

As we watched the twilight turn Purple

Purple is my favorite color

I appreciate you sharing, and I will read your further blogs

True indeed that purple is galactic, dreamy, and mysterious. In "The Color Purple," Alice Walker wrote that Purple "is always a surprise but is found everywhere in nature." \

among us
5 months ago

I value your message and think more people should learnabout art .

Apatura Iris, aka the Purple Emperor

I can’t believe I’ve been a lover of purple for so long and yet knew truly nothing about it (particularly its crustacean roots). Excellent read as always!

Becky B
5 months ago

This was an enlightening article about the color purple! I learned so much!

Great article! Loved learning about such a famous color.

Ahahaha! I love the purple poem!

I read your article and it was a fantastic read, your best one so far! It was informative, yet entertaining. You start reading and it draws you in, making you want to read more. Next thing you know, you’ve learned something new and because of that, your life has become a little better because of it. :) …Oh, and you’re a poet too!