Paul Gauguin: A Spiritual Journey at the de Young 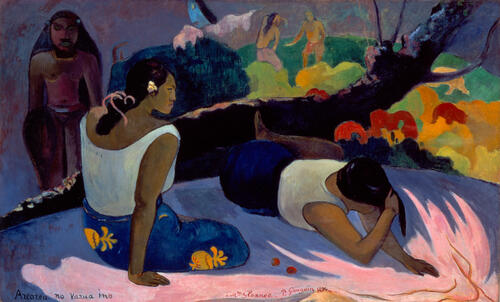 You wouldn’t expect to uncover a spiritual path in the halls of a museum, but the de Young Museum is hoping otherwise. Paul Gauguin: A Spiritual Journey, now showing at the de Young, seeks to place a halo of sorts on the head of an artist who, among other things, has been criticized as colonialistic and repudiated for having relationships with young Pacific Islanders.

The exhibit is in collaboration with the Ny Carlsberg Glyptotek museum in Denmark, which has a large collection of Gauguin work. They are often reluctant to put the work on loan, but were struck by the possibility of showcasing it alongside de Young’s collection of indigenous art from the Pacific. This makes the exhibit all the more surprising, and certainly a marvel. This is the first time any of the paintings have been shown at the de Young, and for many of the more famous pieces, the first time in a long while they have been allowed outside of Denmark.

The journey begins unexpectedly with a painting of Gauguin’s children posed in a Parisian courtyard. It’s a striking kickoff for a number of reasons, because, if anything, it’s quite the opposite of a spiritual beginning. In fact, it’s domestic. What the placement achieves is rather historical: it establishes Gauguin as an artist who, even from the very start, was a restless soul in need of new forms of artistic expression. It also develops the theme of Gauguin as a family man that runs throughout the exhibit, and by extension, as the starting line of a running counterpoint to the idea that Gauguin was a poor father and a questionable man. 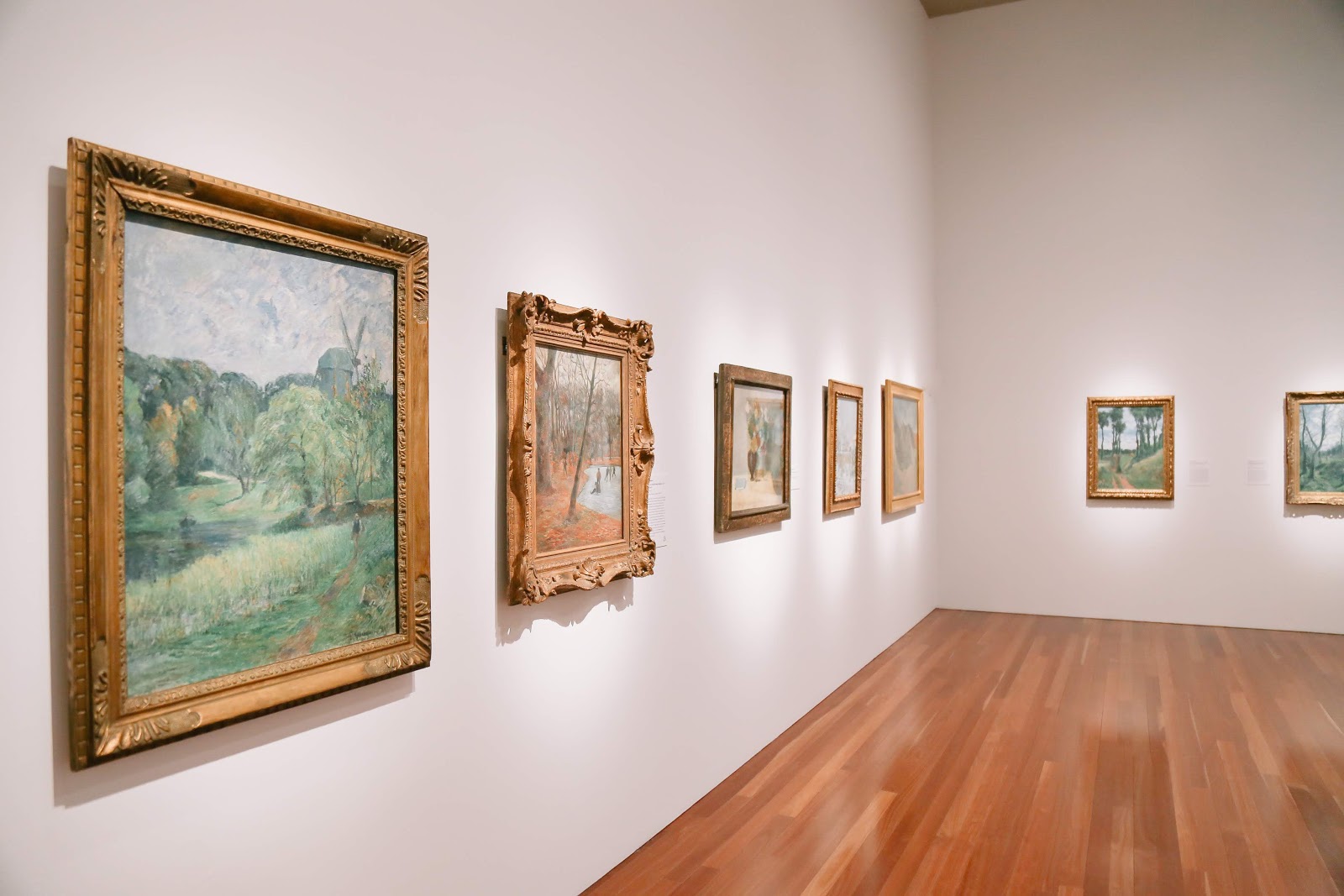 The exhibit moves on to his work inspired by Paul Cezanne and Camille Pisarro, two impressionists he collected works of, as well as his paintings of Denmark and Arles. The paintings found here are stunning, and show a remarkable attention to the mystery of nature. The exhibit slyly suggests that these works demonstrate Gauguin’s interest in spirituality, or rather, a world outside of the ordered society, and the thought is compelling. The paintings are soothing but elusive. Other work shows interest in the pastoral culture of Arles, an interest that is connected later to his work exploring Tahitian identities. What is important to note is that the spirituality, as defined by the exhibit, also reads as a rejection of a world moving away from nature. 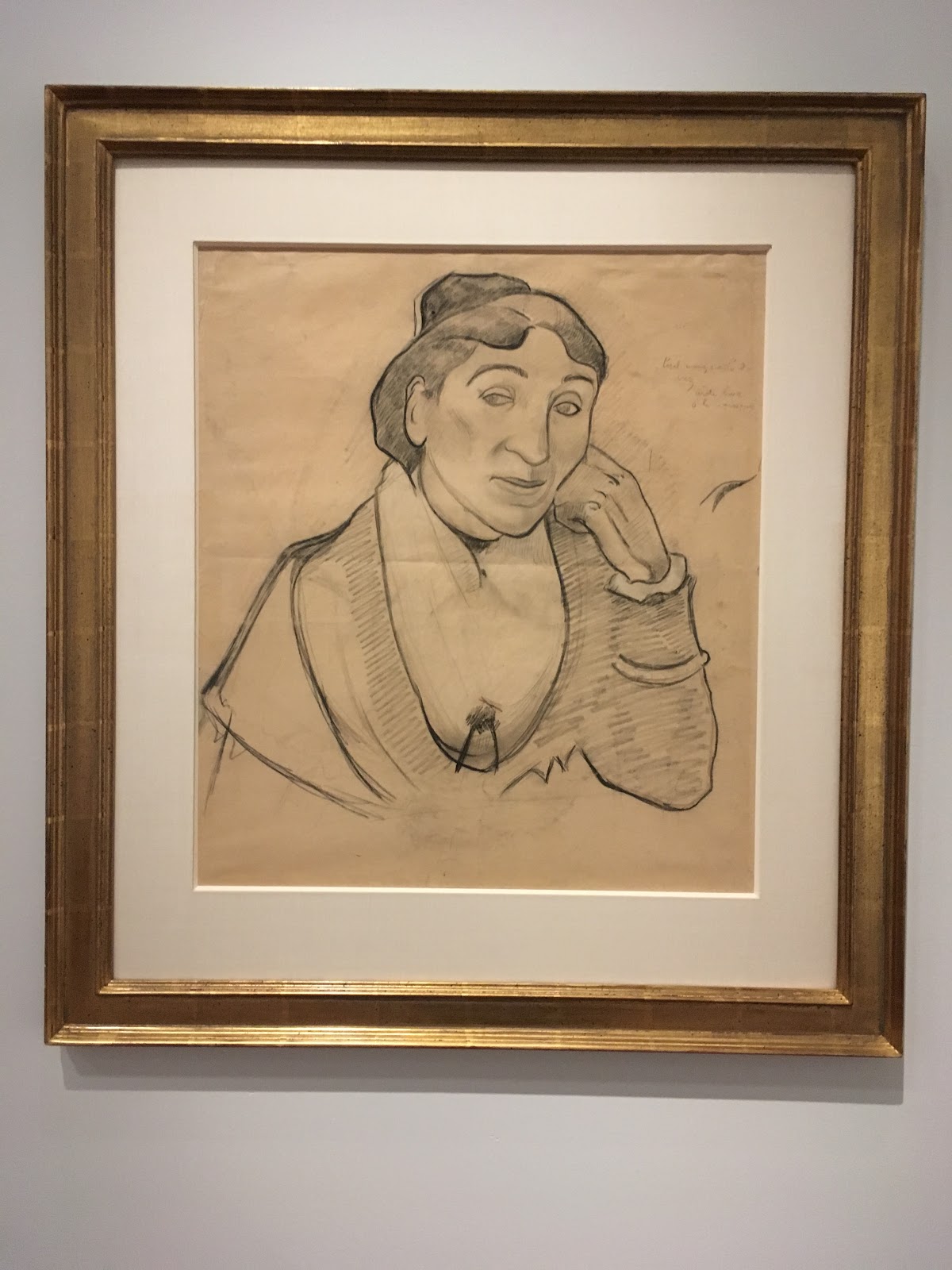 From here, the exhibit touches on his work with pottery and briefly on his stay with Vincent van Gogh. Strangely, for an exhibit that is happy to pull from Gauguin’s letters to clarify a point, there are scant details given about his stay with van Gogh. What is present, however, is a pencil study of a woman that Gauguin – a study both he and van Gogh used for various paintings. All in all, for the exhibit, it feels like a pit stop on a larger journey, like Frodo from the Lord of the Rings stopping for a gulp of water. 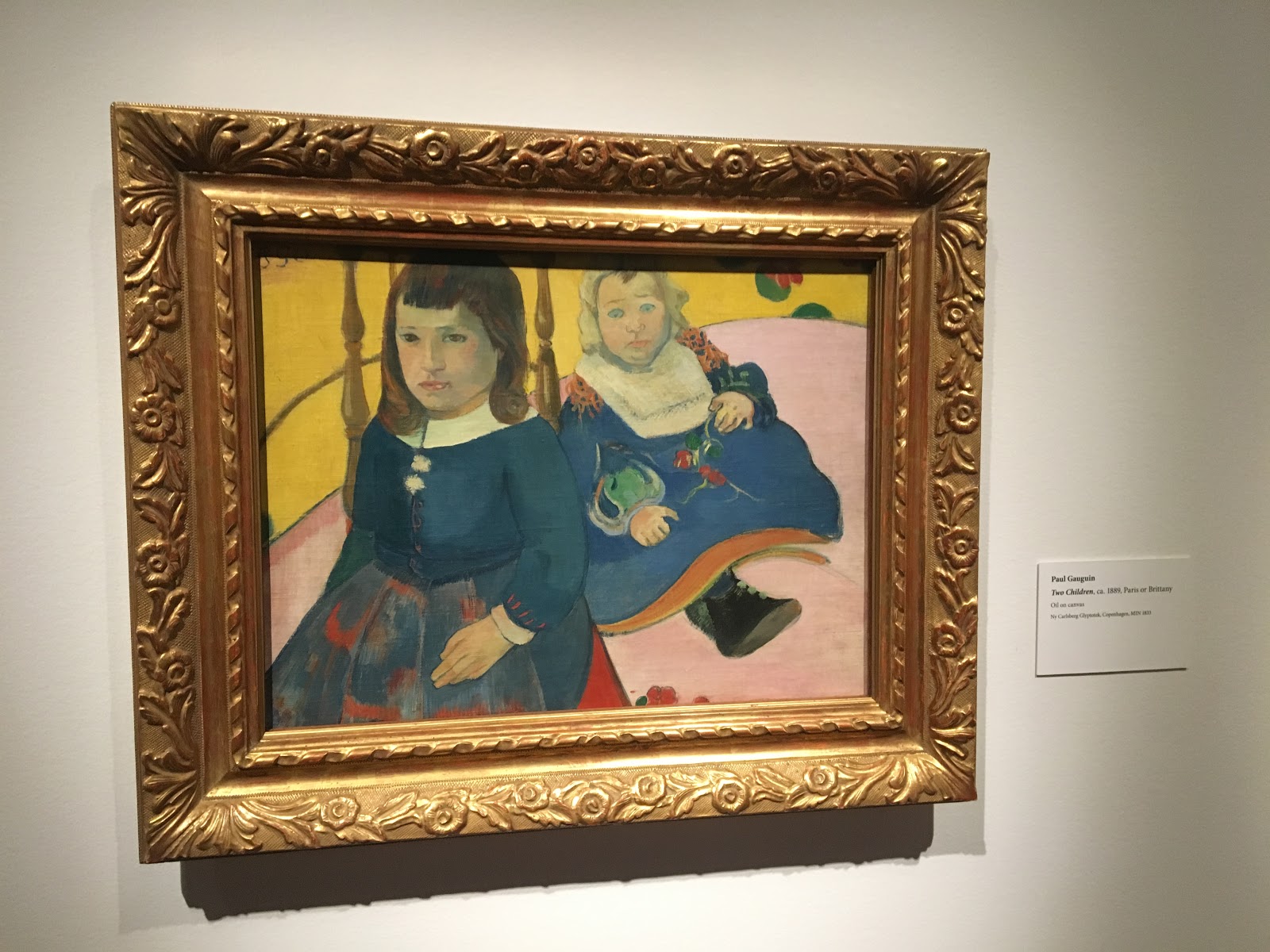 Another painting of note here is an odd composition of his two young daughters painted from memory. This is something the exhibit does really well; it presents a painting that, more than add to the question of a spiritual journey, it humanizes Gauguin. Overall, in fact, the question of spirituality feels more like a question of humanity for the exhibit. 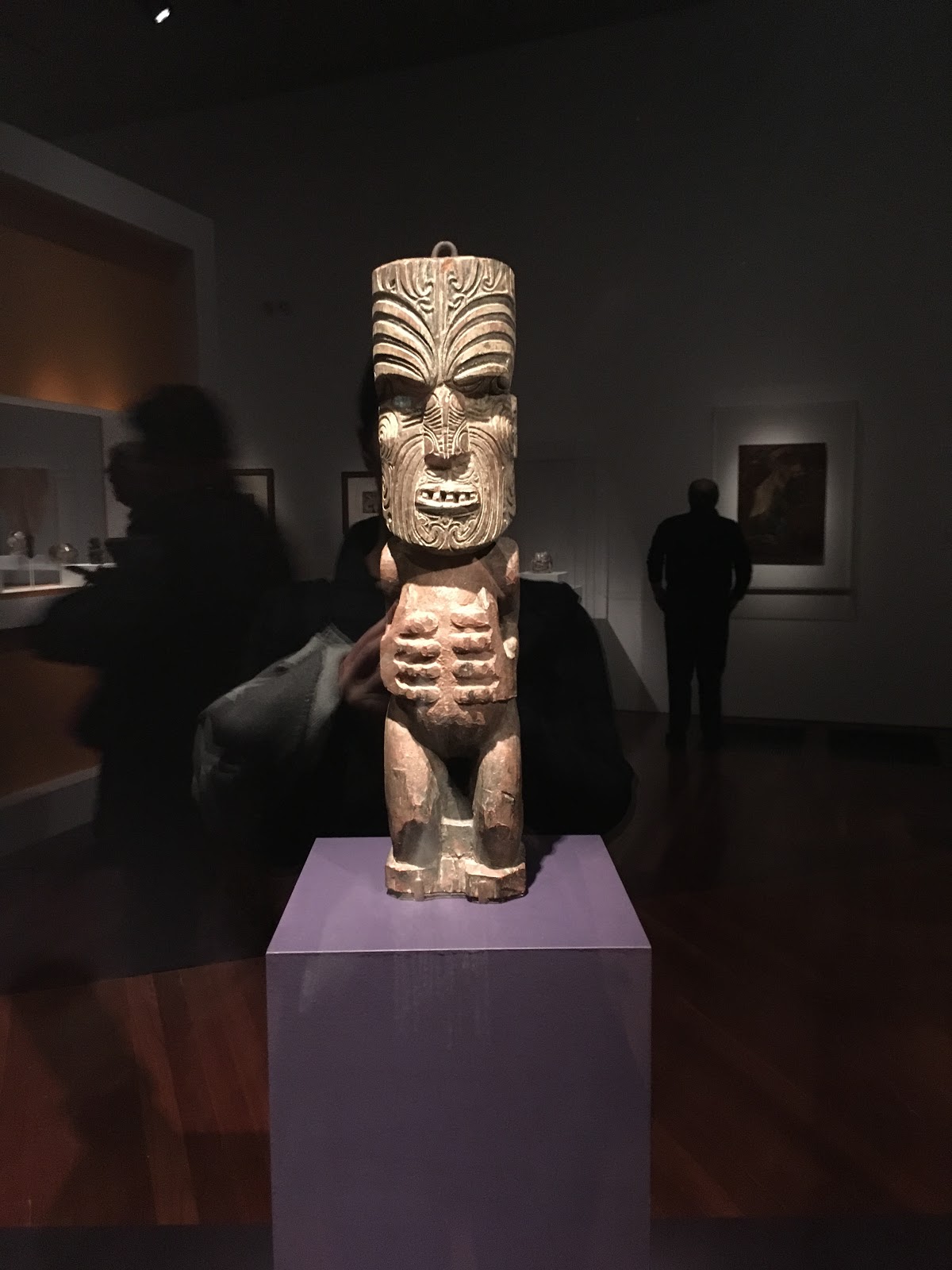 An example of the Pacific artifacts on display

The draw of the exhibit is also perhaps its most confusing component, which is fitting for a spiritual journey. Gauguin’s later works in the Pacific are displayed parallel to artifacts from indigenous cultures of Tahiti and Marquesas. Like two singers, they attempt to harmonize, and it is certainly interesting. The success of the two illuminating something unseen in the work of Gauguin is unclear, but it does offer answers to why Gauguin would be interested in visiting Tahiti in the first place, at least as an artist. The paintings are colorful, strange, and mysterious. They are really something to behold –- familiar but just beyond understanding, kind of like an episode of the show Twin Peaks. 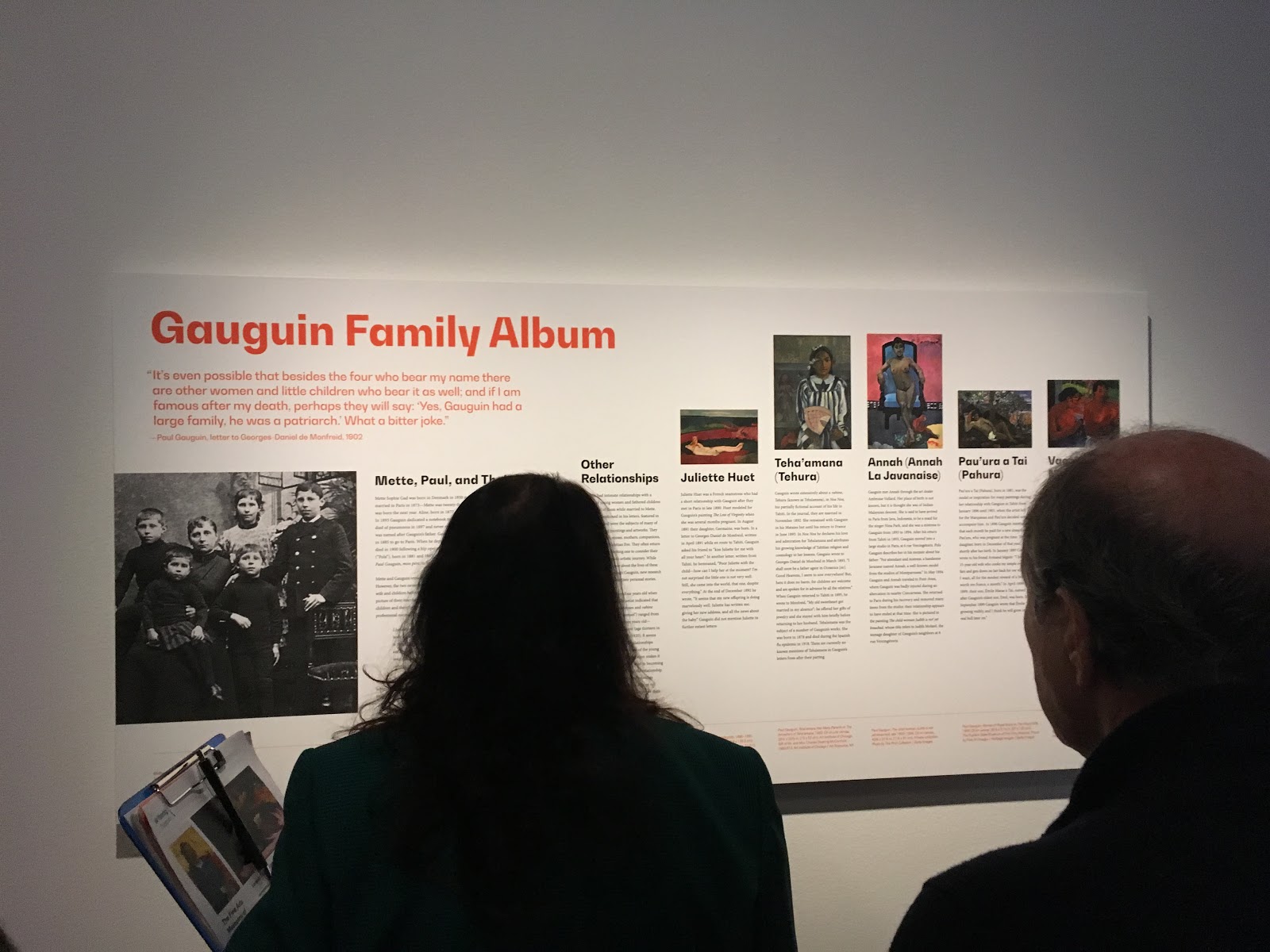 Not a family album you'd want to open during the holidays

Unfortunately, the exhibit jumps around the questions surrounding his relationships with young women in the islands. In fact, it places the portraits of his lovers on a Gauguin family album where a further attempt to reappraise Gauguin is made, insofar as it explains his relationship with the young women in a historical context and as a question of who approached whom.

The exhibit ends with a screening of five different videos made by Samoan artist Yuki Kihara and commissioned by the two museums. Each one is a first impression by Kihara and her friends who all identify as fa’afatei, a third gender that is fluid between male and female. The videos are lively and entertaining that ask you to slow down and enjoy art without any pretense, and they offer compelling and humorous readings of Gauguin’s work. Furthering the conversation surrounding his personal history and of his place in colonialism in an approachable way, it’s a great end to the exhibit. It feels very colorful, just like Gauguin’s paintings. 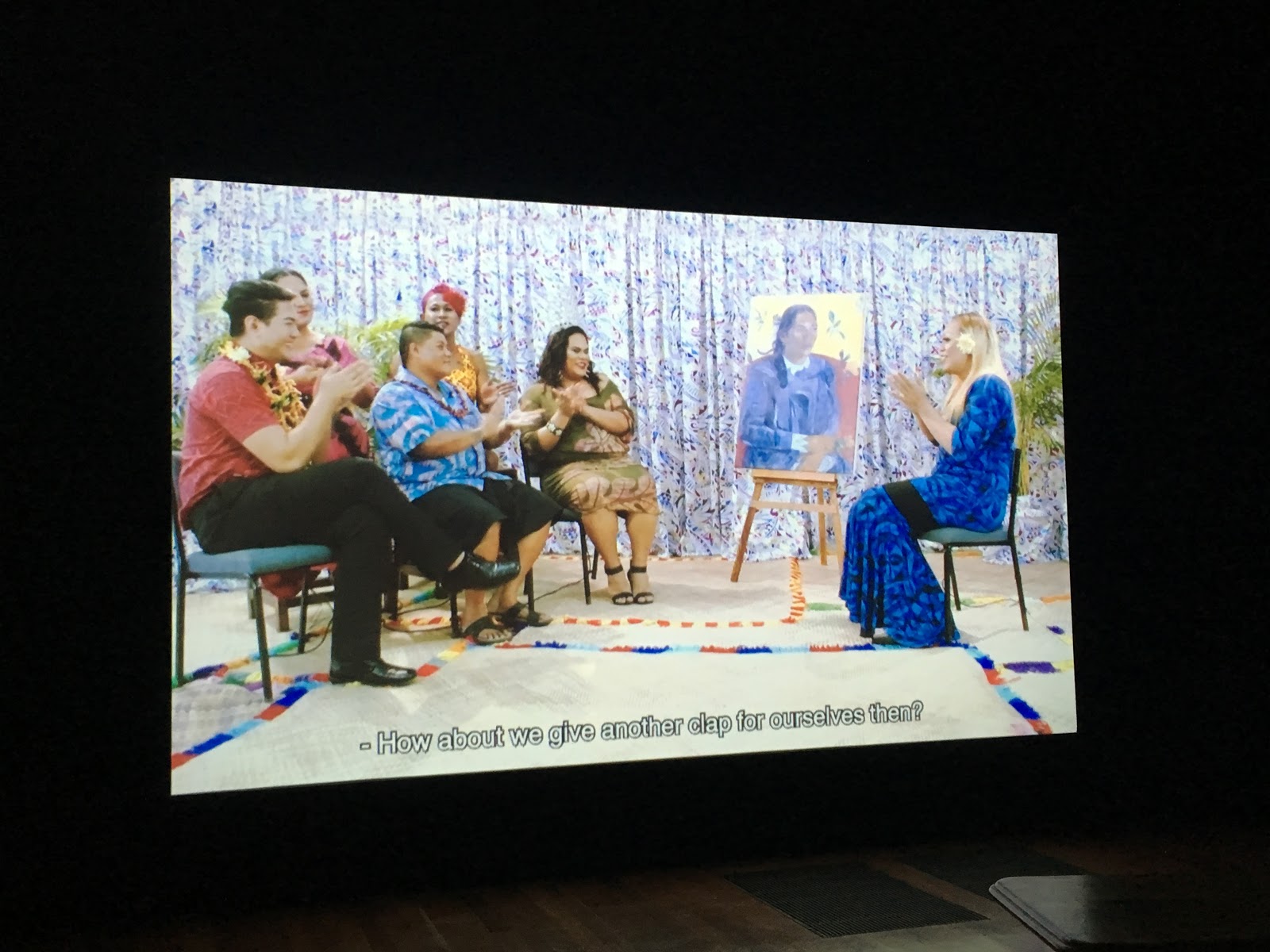 For Paul Gauguin: A Spiritual Journey, they’re hoping the combination of Gauguin’s work with the artwork of the Pacific will results in something new, something more mysterious, like blue and red mixing to purple. Or for Gauguin, into chrome yellow, because that man loved chrome yellow. You may walk away unsure exactly what his spirituality was, or what the concept of spirituality even means for his work. Yet, if nothing else, you will walk away with a thought provoking understanding of an unusual artist who was an even more unusual individual.