It’s happening again tonight! We all know who killed Laura Palmer, but finally after years and YEARS of waiting, we will finally find out what happened to Agent Coop. Or well, I hope we will, sometime, in the upcoming weeks. Tonight’s episode will be a two!-hour season premiere that kicks off 18 episodes total! Twin Peaks is a piece of art, that’s no-brainer. But, while re-watching the series and movie, and reading Laura’s secret diary I stumbled upon a few things that make it even more obvious David Lynch is a total art nerd.

To be honest, I’ve been meaning to write this blog for weeks, but I keep getting lost in young Kyle MacLachlan’s eyes.

Isn’t he too dreamy?

Twin Peaks Homecoming vs. the Queen of Paris have more in common besides dying at a young age and leaving behind a very beautiful corpse.

Both girls were teen models. Camille was the most sought-after model of the Impressionist circle, painted by Monet, Manet and Renoir. They were also both mistresses to much older men. Camille was still a teen when she first met Claude Monet, who wisely kept their relationship a secret. He told his father and aunt he abandoned “his mistress and child” since the family did not approve of their relationship. Both girls were also known for their mysterious melancholic expression, probably because of their 99 problems, of which abortion and money were at least one. 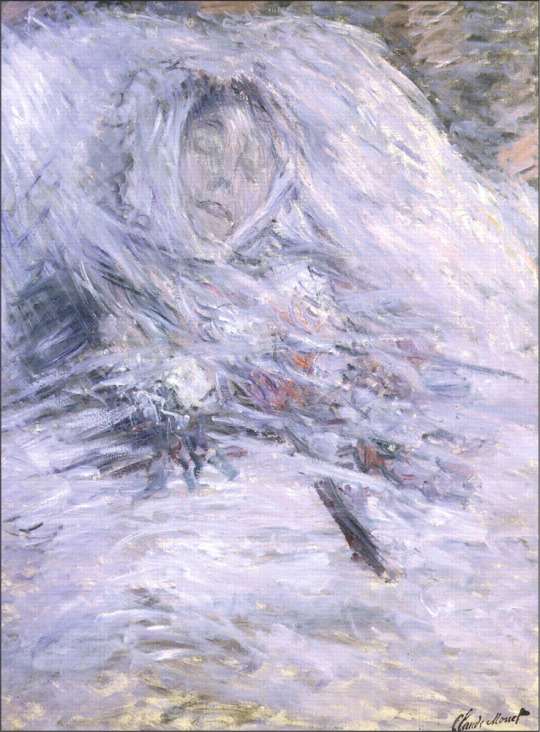 Camille on her deathbed by Claude Monet at Musee d’Orsay

2. The owls were never what they seemed…

So the Giant might have been the first one to warn us about the owls, but Hieronymus Bosch fans knew about them for centuries. Some say Bosch probably lived in two worlds, the real one and the world of his imagination. Other say he might have eaten one or two too many shrooms. But we all agree his paintings are wacky. Also, Bosch loved owls. I’m not sure if anyone has ever counted all of the owls he ever painted, but I can tell you there are plenty!

Back in the early 1500s, when Bosch painted his Garden of Earthly Delights, owls were generally associated with lots of bad stuff:

Even if you like owls, you’ll agree with me that the owls do represent something freaky in his paintings. In Garden of Earthy Delights for example, everyone is going crazy, involved in sinful behavior, evolving into strange hybrid creatures and everything. While the owls are just sitting there, calmly overseeing everything as the Devil’s messengers. I can see them laughing up their sleeves.

When it comes to Twin Peaks we can only guess what the owls really represent. Will we ever find out? 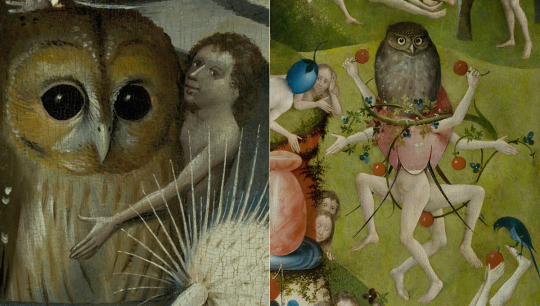 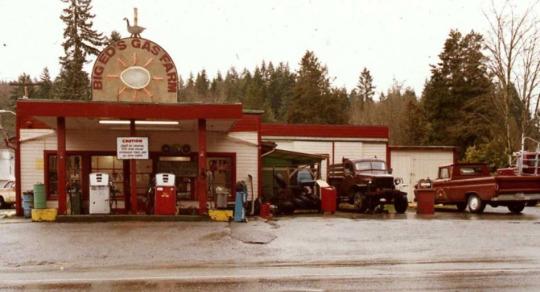 I’m not making this stuff up, David Lynch himself stated in many interviews there are several painters that influenced his films. Edward Hopper’s influence is so obvious, it’s easy to miss. Lynch graduated from the Pennsylvania Academy of Art with a collection of large dark paintings of his own, which ‘needed just to move a little bit’.

He once said: “In art school, I studied painters like Edward Hopper, who used urban motifs – My approach to film stems from my art background, as I go beyond the story to the sub-conscious mood created by sound and images.” 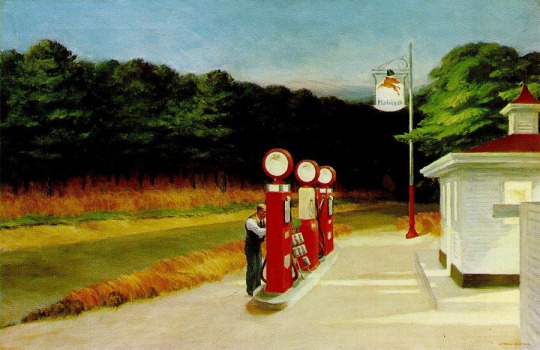 Gas by Edward Hopper at MOMA

It’s not just that Big Ed’s gas farm totally looks like Hoppers Gas. Hopper’s paintings explore temporal dimensions, the hidden mysteries of the suburban American dream. His paintings are melancholic, eerie and mysterious, just like everything Lynch ever made.

The town of Twin Peaks is basically one big Hopper painting in dark ‘noirish’ colors. Lodged between two mountains, Twin Peaks lies on the border between civilization and nature, of civilization and the unknown. “There’s a sort of evil out there. Something very, very strange in these old woods.”

Fair enough, landing a job at One Eyed Jacks by threatening Emory Battis with a fake rape-accusation wasn’t her classiest move, but Audrey Horne has been everyones #girlcrusheveryday since forever.

Backfisch is german for “not a girl, not yet a woman.” Audrey totally was one, which makes her resemblance to Gustav Klimt’s painting of a “backfisch” even more uncanny! 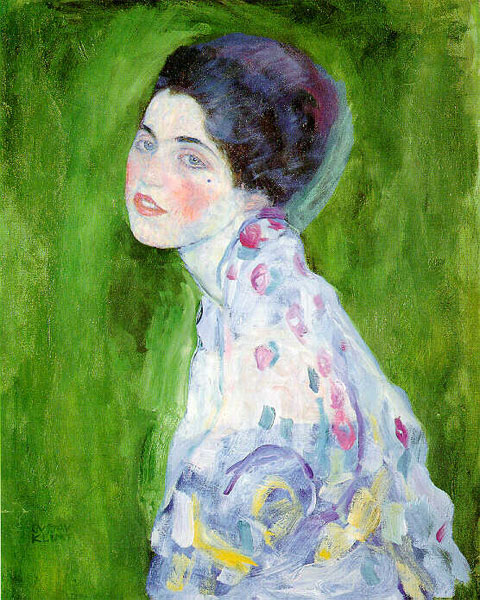 Backfisch by Gustav Klimt at Klimt Museum or Audrey at One Eyed Jacks?

4. the Golden Ratio of death scenes 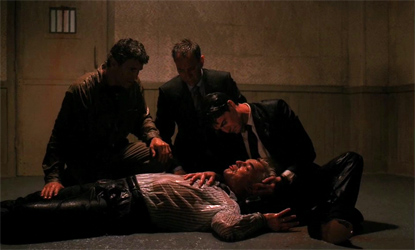 Leland Palmer might not have had a rock hard body like the guy in William Blake’s Death of the Strong Wicked Man, but he was definitely wicked. The scene of Leland dying in a police holding cell, resembles many death scenes in art history. But, we all know it’s not Leland’s soul escaping through the window! 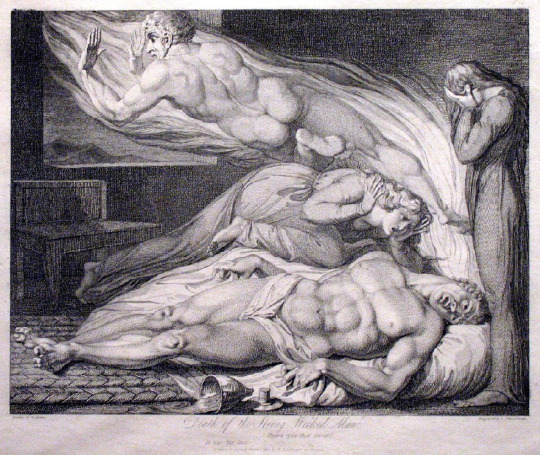 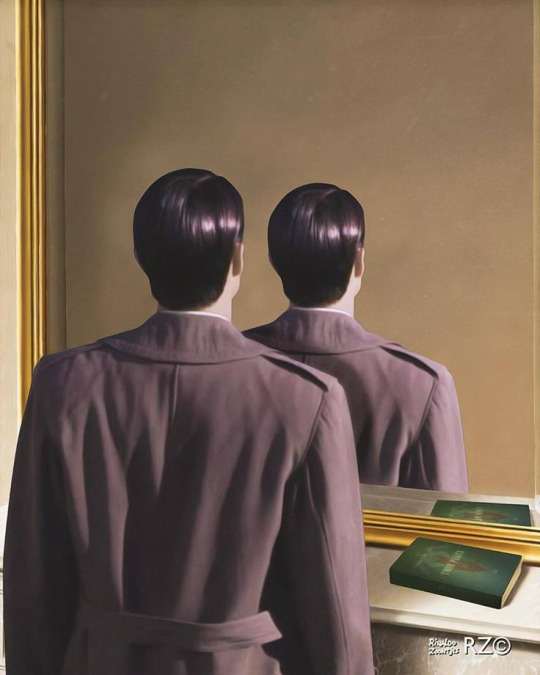 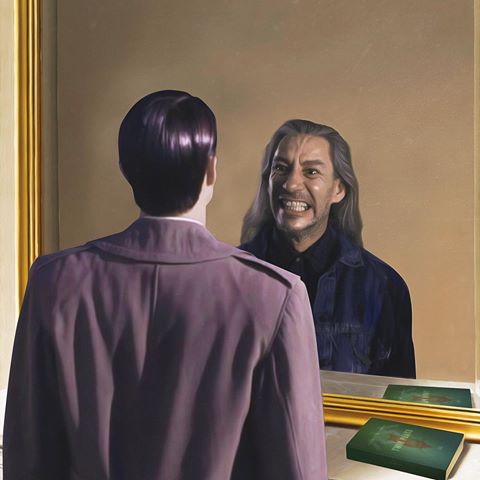 As both an Art History and Twin Peaks nerd, It’s hard NOT to have thought of this before! Dale Cooper totally is the guy in Rene Magritte’s Not To Be Reproduced at Museum Boijmans van Beuningen.

Ok, now it’s time to figure out a way to get Showtime!