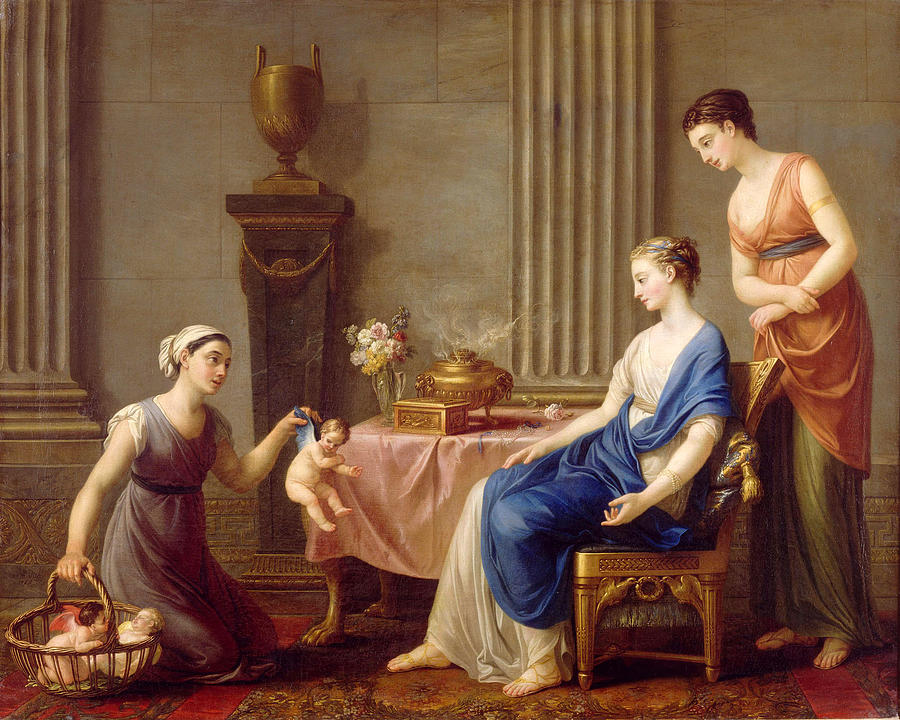 Before there was OkCupid, there was The Cupid Seller by Joseph-Marie Vien, painted in 1763. Turns out love has always been for sale. If you don’t have love, my guess is you would pay up for it, too. Which would you choose, the red, yellow, or blue cupid? Using an ancient God like Cupid is typical of the Neoclassical period. There are more cupid and psyche paintings done during this time than the ancient world. Why? Because the neoclassical artist took the ideas, themes, gods, goddesses, and rulers of the Classical world, and put the pedal to the metal.

One could argue the Renaissance was the classical spark that turned into a Neoclassical fire 300 years later. Revolutions abounded; America started it off in 1776, and France followed not long after. Political and cultural change with a radical and bloody shift away from Monarchies towards a new experiment called Democracy was all the rage. Neoclassical enlightenment philosophers, artists, and writers pointed to the ancient worlds of Greece, Rome, Mesopotamia, and Egypt as the guiding forces for a new way of operating in the world, promoting rationalism and individualism over traditional religious views and models of government. This fascination with the ancient world was fueled by the uncovering of the ruins of the Roman cities Herculaneum in 1738 and the excavation of Pompeii in 1748, both of which provided remarkable new insights into the Classical world. With a concurrent rise in literacy, travel, education, coffeehouses, brotherhoods like freemasonry, and societies devoted to scientific studies, the notion of a public sphere came to be: an arena in which ideas could be disseminated and discussed on a wider scale than ever before, and art played a central part in that discourse.

By the mid-eighteenth century, several countries in Europe possessed their own royally sanctioned art institutions. France had the Académie Royale de Peinture et de Sculpture, which held an annual exhibition known as the Salon that was the largest of its kind in the world during the eighteenth century. Open to the public, this juried show was where careers were made and popular taste was cemented. It is also where we see the birth of the modern art critic, as enlightenment thinkers like Diderot began considering the role of artistic beauty in public discourse and having their ideas printed in widely read newspapers. It was also during this period that a number of women artists rose to prominence. Prior to the French Revolution, a select few female artists were allowed to study at the Académie, though, unlike their male counterparts, they were not allowed to take “life classes” to study from nude models. This unfortunately prevented women from doing much in the way of history painting, which was considered the pinnacle of art at the time, so most painted portraits and still lifes. Nevertheless, some women artists were able to find success, and many found positions for themselves working for female aristocrats. While the French Revolution caused a drastic change in fortune for some of these artists, in the 1790s the salon was opened up to non-Académie members, which allowed even more women to show their work and gain recognition.

The art of the neoclassical time period is easy to spot! It’s usually big and grand in both scale and concept, but less ostentatious and more cerebral than Rococo art. Subjects were typically drawn from classical myth and history, and even when artists depicted present-day scenes, they portrayed them in a classical manner in order to impart a message or virtue to the viewer. The defining quality of Neoclassical art is its renewed sense of simplicity and symmetry, inspired by surviving works of art from ancient Greece and Rome. At first glance, you may think you are just looking at an amazing painting of Socrates, for example, but on your second take, you realize it’s a call to action. It’s screaming “Are you willing to die for your ideals?” Its propaganda for Democracy. It’s not too far of a leap to track this forward to the World War II poster of Uncle Sam pointing “I want you!”

Today, architecture may be the best place to see the impact of Neoclassical ideals. You can see its influence in iconic public monuments and buildings such as Grand Central Station in NY, the Washington monument and Lincoln Memorial in DC, and The Union Depot in Saint Paul, MN. Many capitol buildings in the United States are neoclassical-inspired, as are many banks and city halls. With symmetrical design involving marble pillars, pediments, and friezes, the style evokes the rationality, moderation, and stability associated with past civilizations. Egypt lasted 3,000 years. Rome lasted 1,000 years. Referencing these ancient cultures evokes power and stability at the same time. The pyramids of Egypt are still standing, and today we benefit from our neoclassical founding fathers and mothers. They built a foundation (pun intended) for us by cherry-picking the goodness of the classical world as the visual language for their grand experiment called democracy.  While it may seem similar to the Renaissance, Baroque, and Rococo styles, try not to confuse Neoclassical art and architecture with its predecessors. With its simple, harmonious designs hearkening back to buildings like the Parthenon, it should become relatively clear over time.

Elisabeth Louise Vigée-LeBrun's paintings are beautiful! Every one of them shows similar facial expressions that look as though they are content and relaxed. Her portrait of "Countess Anna Ivanova Tolstaya" specifically stood out to me, because it reminded me of the Italian painter Federico Zandomeneghi's work. He painted a lot of human figures moving, leaning, and at work doing something in the portrait. Almost like a photograph. I think LeBrun's paintings reflect a lot of neoclassicism in the way she used the human figure to showcase emotion and feeling. Artists of the 15th and 16th century like, da Vinci, Greco, and Michaelangelo all did a wonderful job at creating these emotions, motion, and feelings through their art. Very beautiful.

I like The Monticello by Thomas Jefferson because it is part of early America that is still staying and shows Neoclassicism in its architecture. The dome on the top reminds me of the Pantheon. The front of the building reminds me of a Roman temple. The building was built in 1772 which lines with the time that Neoclassicism was happening. Also; the building closely resembles Thomas Jefferson's Memorial building even though the memorial was built in 1943.

Thomas Cole's painting "The Architect's Dream. really caught my eye. The structures in the painting are all architectures that are very famous and well-known. I recognized most of them through art class or through a video game series call Assassin's Greed (in which each game is set in a certain time period). The Greek or Roman temples, structures for ancient Egypt, and a church. I realized that most (if not all) of the structures are religious structures. Since religion played a big part in ancient society, it makes sense that the most famous and well-known structures would be religious ones. Another I notice in the art is on the stone that the architect is laying on, Thomas wrote his name one and who or what it was for. It is hard for me to read since, I try to zoom it in, the resolution gets bad. It is also amazing to think that architects in the classical are built the structures from stone, marble, clay, and other materials and that most of them lasted for centuries.

Giovanni Battista Piranesi made quite a few amazing prints, etchings, and engravings. The pieces are of Roman harbors, railways, and architecture. It's neoclassical because it is a copy of the ancient Roman style, but they are made with more modern techniques.

“The Cupid Seller” by Joseph-Marie Vien is a stunning example of a neoclassical painting. In the piece we see a woman offering a little person (presumably a cupid) to another woman. This painting is a reference to ancient Greece and Rome because of not only how the women are dressed in more traditional Greek/Roman clothing but also because Cupid is the Roman god of love.