In the beginning, there was darkness…

Tohubohu, according to the Merriam-Webster, is a fancy way to describe chaos or confusion. It’s rarely spoken in everyday English parlance, but has greater usage in the Francosphere.

The phrase has its roots in a Hebrew phrase that actually means “without form and void,” with the “tohu” part meaning formlessness and the “bohu” part corresponding to “emptiness.” Another way to say the word is “tohu-wa-bohu.” In context, tohubohu was used to describe the state of the Earth and by extension the universe immediately before God brought light into it, specifically in the book of Genesis, verse 2. 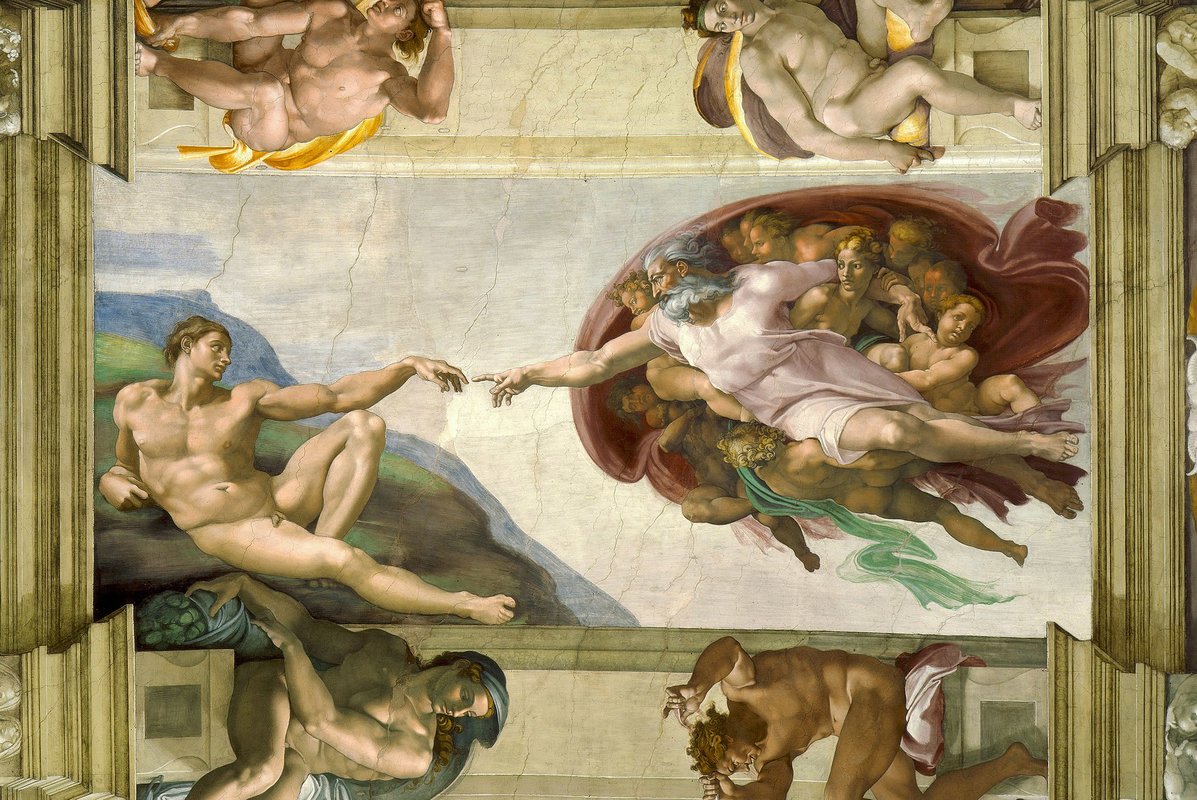 The Creation of Adam by Michelangelo, in the Sistine Chapel in Rome

The first recorded use of the phrase was in a work by Rabelais in 1552 as the names of two islands: Thohu and Bohu. However, its modern spelling did not exist until Voltaire used it in 1776. In French, instead of “formless and empty,” the literal translation would be “confusion and commotion.” In other words, a clusterf*ck. 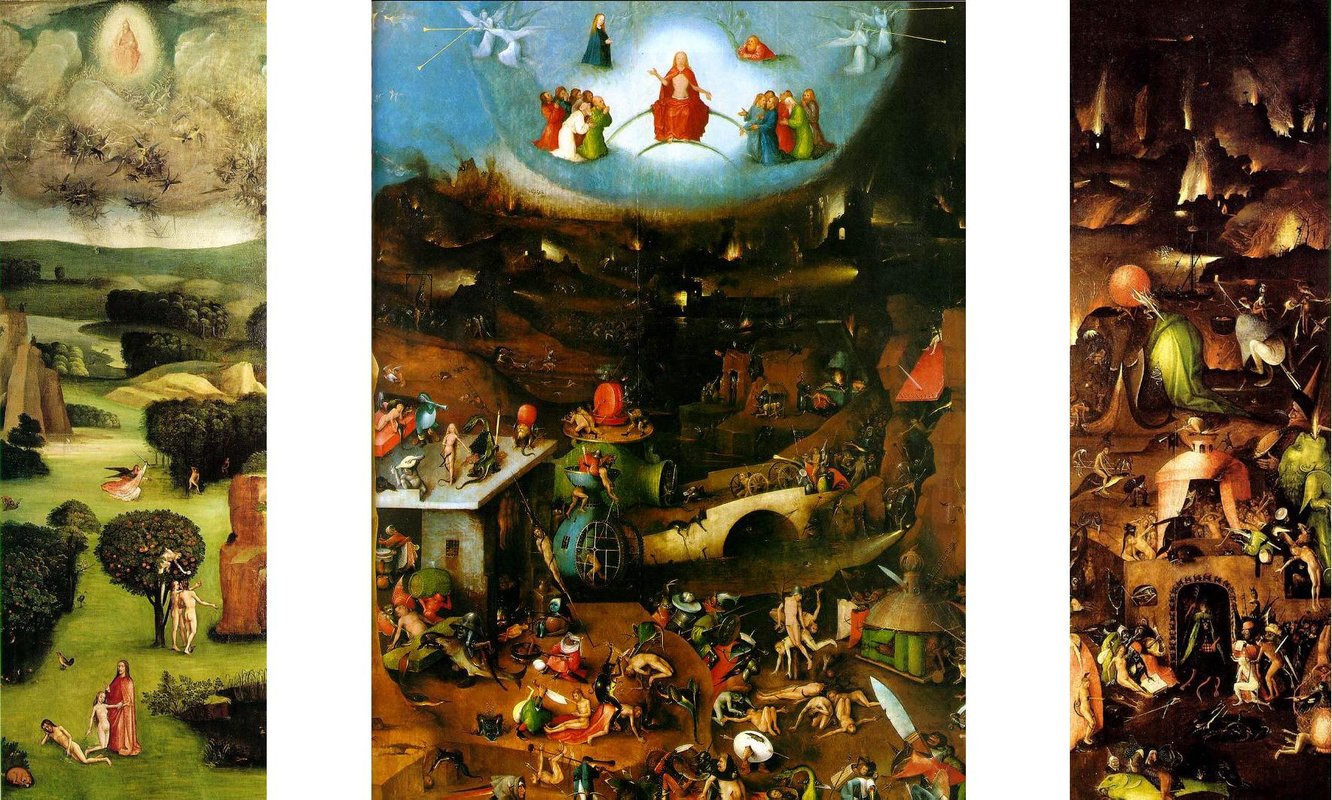 The Last Judgment by Hieronymus Bosch, in the Academy of Fine Arts in Vienna, Austria

Hieronymus Bosch captures this with just the right amount of surreal imagery and biblical scope. There’s so much going on here you can’t help but take a closer look to get every last detail in. 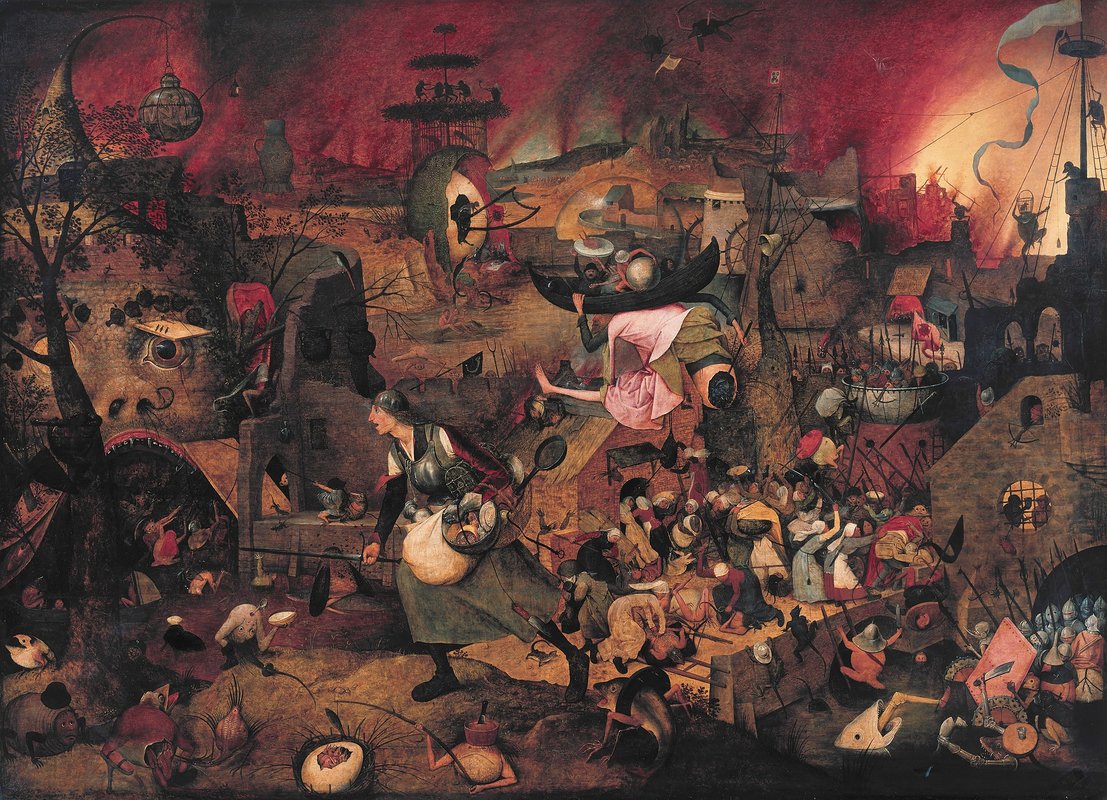 Here’s another good example of the second definition of tohubohu by Pieter Bruegel the Elder. Really hammering the biblical scope home, and considering the Devil’s diametric opposition of everything God stands for, has chaos, confusion, and turmoil in spades. Way to scare the serfs and monks straight, Pieter.

As the centuries went on and art evolved conceptually and physically, tohubohu became an even greater quality that could be attributed to art pieces, especially the abstract works of the 20th century.

Guernica by Pablo Picasso, in the Queen Sofia Arts Center in Madrid, Spain

Initial reaction to the Cubist works of Picasso and others after him were mixed. One German guide described Guernica as “a hodgepodge of body parts that any four year old could have painted.” Looks like a mess? Check. Emotionally turmoiled figures? Check. Made last minute enough to possibly have not been planned at all? Check. Definitely a case of tohubohu. 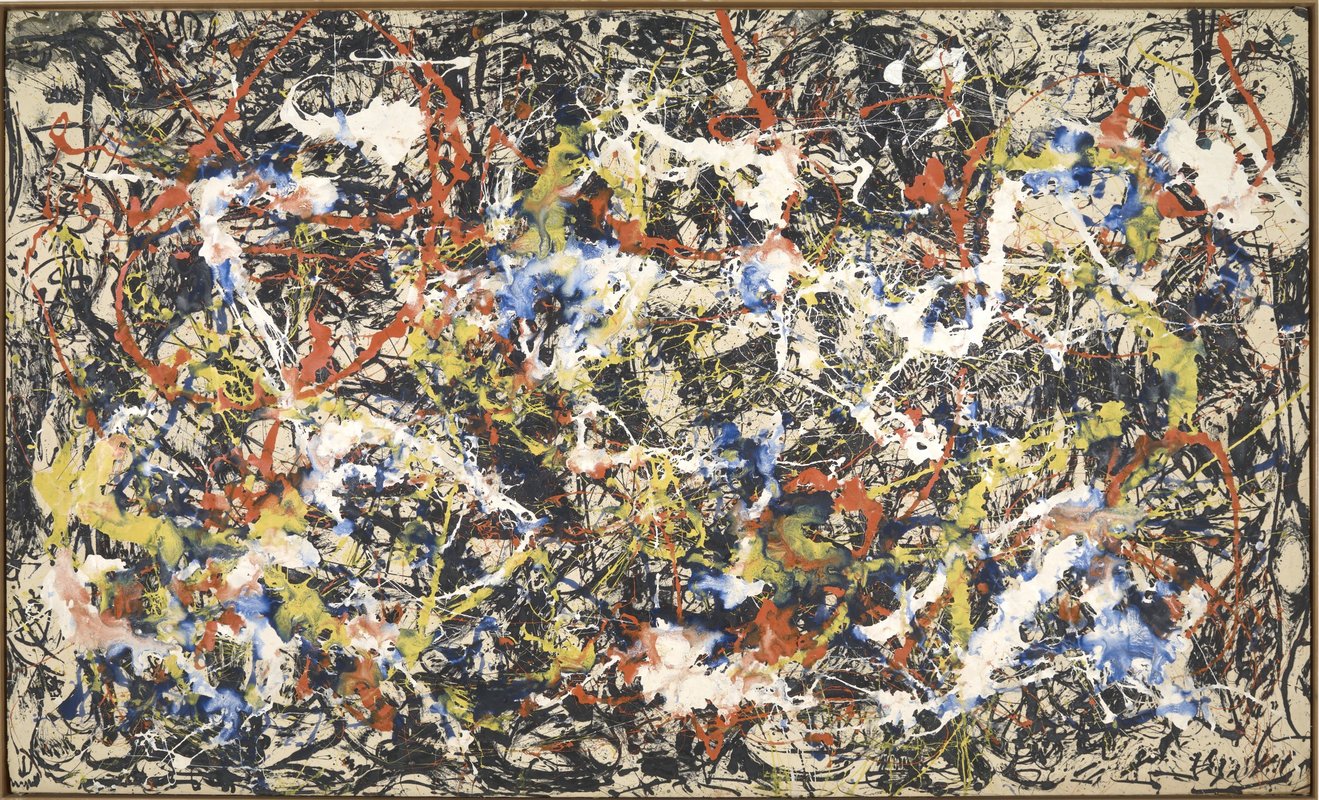 Convergence by Jackson Pollock, in the Albright-Knox Gallery in Buffalo, NY, USA

Convergence was originally supposed to be a black and white painting, but Pollock thought that would be too basic of a finished product, so he went HAM and layered successive colors of paint over the canvas. Tohubohu in execution and in technique. 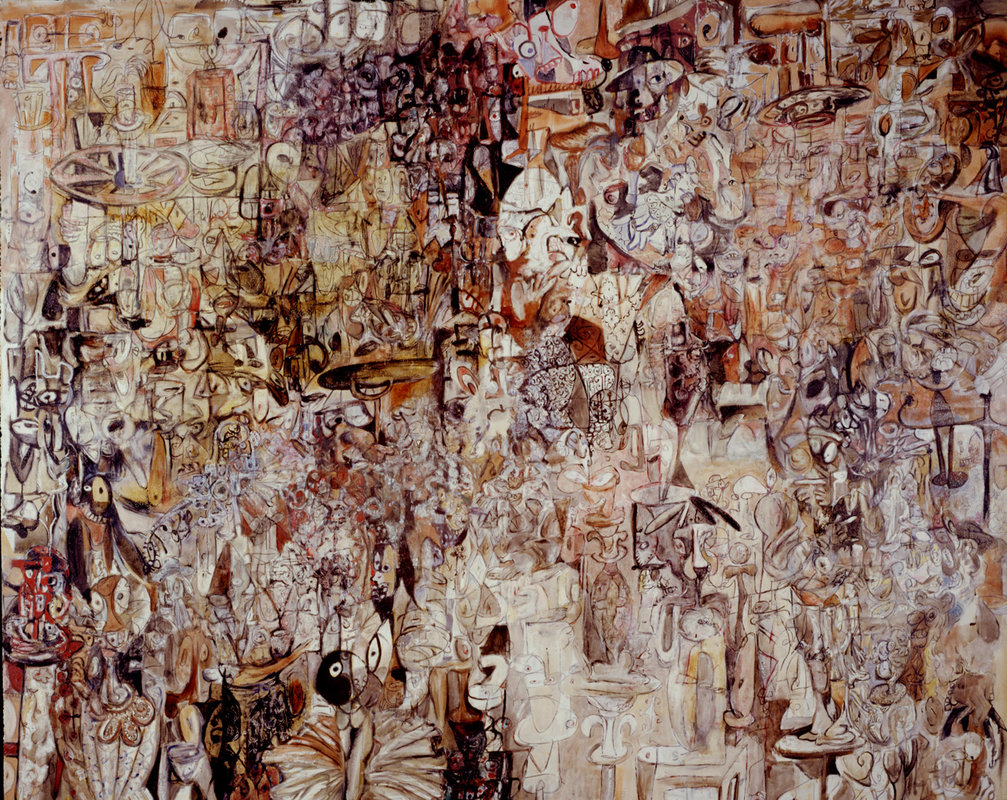 Dancing to Miles by George Condo at the Broad in Los Angeles, CA

George Condo (not related to THAT Kondo, but his work does spark joy), contemporary artist and the mind behind the single and album artwork for Kanye West’s “My Beautiful Dark Twisted Fantasy,” recalls the work of the Cubists and Expressionists in Dancing to Miles. A tribute to the ever evolving, manic evolution of Miles Davis’s style over the years, Condo intended this piece to reflect his restless, progressive spirit. All of the figures shown were meant to represent all the emotions within a person, laid out in a cacophonous commotion, in what Condo called “psychological cubism.” 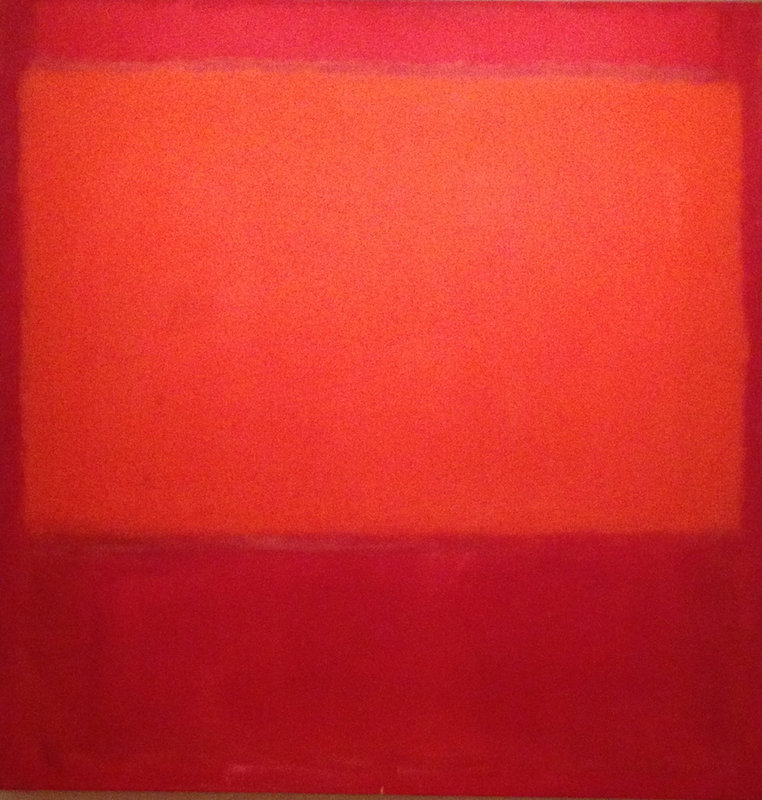 Orange and Red on Red by Mark Rothko at the Phillips Collection in Washington, USA

As the abstract movements progressed, artworks became much more minimalist in form, coming closer to the initial Hebrew meaning of tohubohu. Here, Rothko’s Orange and Red on Red featureless color fields offer no figure, no form beyond the colored voids. It’s pretty poetic, how the progression of the past art movements reflect Genesis 3:19 and Ecclesiastes 3:20: “From dust you came, and from dust you shall return.”

Fantastic article, Michael! As you say in Hebrew, yasher koach!!