Truth & Beauty: The Pre-Raphaelites and the Old Masters at The Legion of Honor

This exhibit is going to blow you away. You may be so moved by its beauty that your soul feels like it’s floating in flower petals. Don’t say I didn’t warn you.

Every once in a while, a show comes along that’s just about perfect: thoughtfully arranged, lovingly curated, and all presented in such a way that it allows connections to be successfully made across time and place. “Truth & Beauty: The Old Masters and the Pre-Raphaelites,” now showing at the Legion of Honor in San Francisco, is just about as perfect as they come. It also happens to be an entirely unprecedented show, filled with stunning masterworks from major European collections that are so precious to their home museums that they have never, that’s right, never, crossed the pond before. Artworks so priceless their museums refused to let them go to a secondary location after the Legion of Honor! (Which is rare, as major shows often do a circuit across various U.S. cities.) Artworks that will consume your senses and leave you feeling utterly dazzled!

Artworks that are even better than a balloon drop!

So how was curator Melissa Buron able to get such excellent objects? The show she envisioned was about the Pre-Raphaelites, a group of rebel artists from Victorian England who were fed up with the official teachings of the Academy, which held Raphael as the pinnacle of artistic achievement. While Raphael himself was much loved by the Pre-Raphaelites, they considered the artwork produced by his followers to be stale and histrionic. Instead they sought inspiration in other places -- notably the art of the Northern Renaissance and Renaissance Italy. While there have been many exhibitions of the Pre-Raphaelites, what makes this exhibit so special is that it is the first to offer a comparative view of The Pre-Raphaelites and the Old Masters who inspired them, with stellar examples of artists like Jan van Eyck and Botticelli as well as beloved works by Dante Gabriel Rossetti, John Everett Millais, and William Holman Hunt. Why did no one think of doing this before?

The exhibit goes fairly chronologically, beginning with the main players and tracing their style and influences as second generations of artists joined their ranks. Though their styles would diverge greatly, the PRB sought truth and beauty, and their main precepts were faithfulness to nature, the expression of genuine and worthwhile ideas, and the eschewing of the stale and self-parading in favor of what is serious and heartfelt. They longed to convey their religious ideals, yet England had no visual language of their own to express it, since the Reformation practically destroyed what little native picture-making tradition there was in England. This is part of the reason their artwork is so intensely literary (often inspired by medieval and romantic poetry) and why they looked elsewhere for visual inspiration. The Northern Renaissance (think Dürer and Memling) impressed the PRB because of its devout integrity, its faithfulness to nature, elaborate symbolism, and lyrical spiritualism. They also liked their durability and brilliant colors, and they were inspired by The Arnolfini Portrait by Jan Van Eyck, which had been purchased by the National Gallery in 1842, to try new methods of painting that would create such rich and lasting jewel tones. 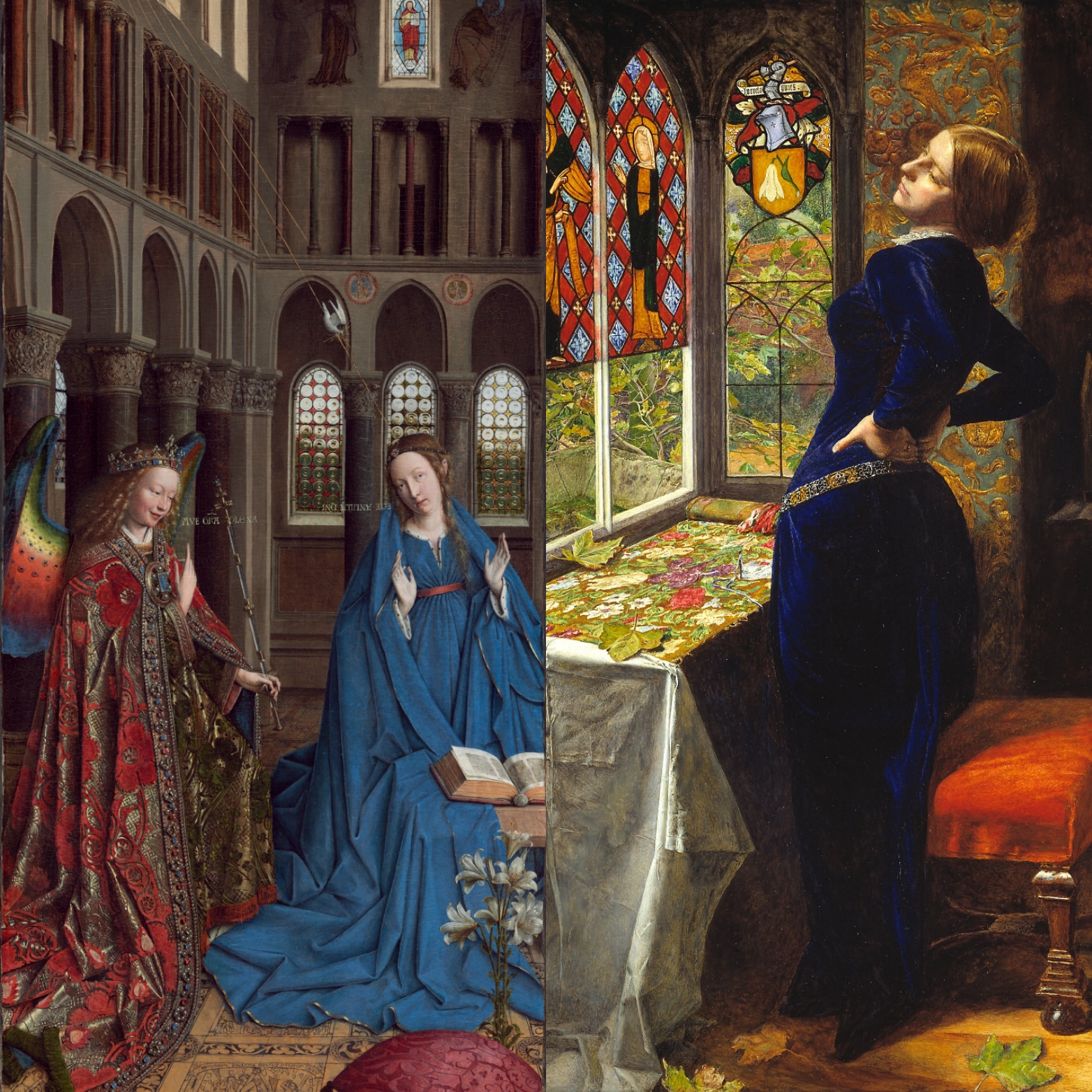 The Annunciation by Jan van Eyck compared to Mariana by John Everett Millais.

In 1851, Millais had never even seen this Annunciation, and yet the similarities between it and his Mariana are abundant. It was a fascinating discovery for curators that Millais could have internalized Jan van Eyck’s style so well that he produced something so similar. Rather than copying, however, Millais and the PRB boys opened a dialogue with these artists from the past.  Also, can you get over how gorgeous these paintings are? I sure can’t.

One thing this exhibit does very well is demonstrate what materials would have been available to the Pre-Raphaelite boys for them to study at different periods of their lives--which Northern masters they were exposed to and when, and how they would have been able to see things like The Birth of Venus if they had never been Italy (because you know that girl doesn’t travel). Before these artists were able to hit the road they would have come across the Italian frescoes and such from prints and other reproductions that were put out by the Arundel Society, which was founded in 1848, the same year as the PRB, to make art from the early Renaissance accessible to artists. Perfect timing!  Some examples of what was available to them can be found at the exhibit.

Botticelli, for instance, was only recently rediscovered by Pre-Raphaelite champion John Ruskin and was hailed for his style’s purity and “innocence”. The Legion of Honor’s very own Love and the Maiden provides an excellent example of Botticelli’s influence in its sense of melancholy and eroticism, the heavy contours, and the positioning of figures. John Roddam Spencer Stanhope, a second generation Pre-Raphaelite, actually owned a villa outside of Florence and he was able to travel to the Uffizi itself for inspiration. He contributed to the tempera revival, copying the methods of painting used by Botticelli. That being said, in this case, the Legion of Honor was astonished to find out that their own painting was not tempera at all! That’s science, for you. 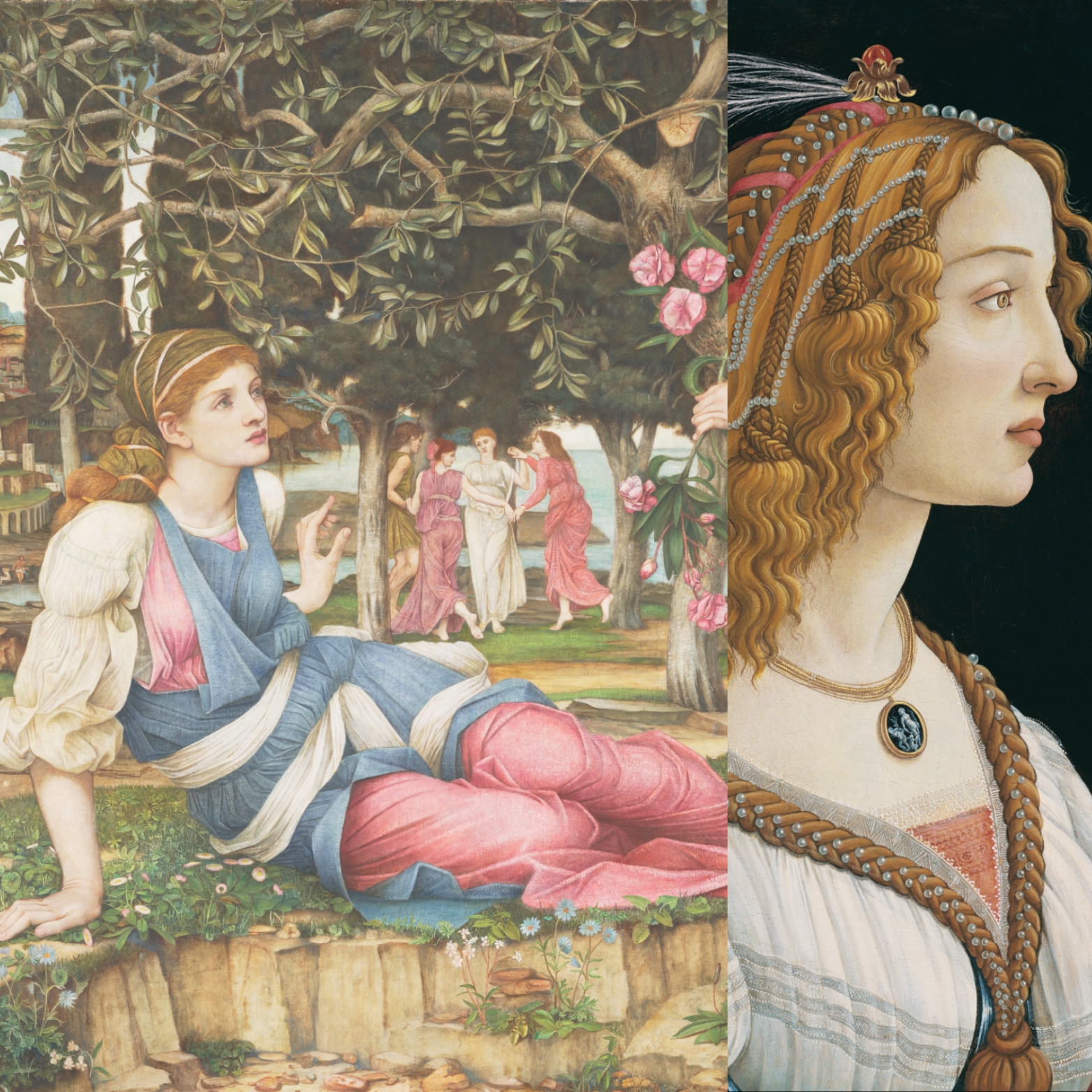 Love and the Maiden by John Roddam Spencer Stanhope compared to Idealized Portrait of a Lady by Sandro Botticelli.

There is also a smashing selection of artwork by female artists from the period. These include the haunting and wistful photographs of the most notable Pre-Raphaelite photographer, Julia Margaret Cameron. Photography, as it could faithfully render nature, was not completely contrary to the Pre-Raphaelite aesthetic, and since she took gothic poems as her subject matter and carefully selected her models to fit the character they were portraying, she is just as innovative as the rest of the PRB gang.  But you can also see a number of paintings by female artists, such as Love’s Messenger by Marie Spartali Stillman and this gorgeous painting by Evelyn de Morgan, whose Botticelli inspiration is evident in the golden waves of hair, outlined edges, flowing fabrics, and pensive mood. 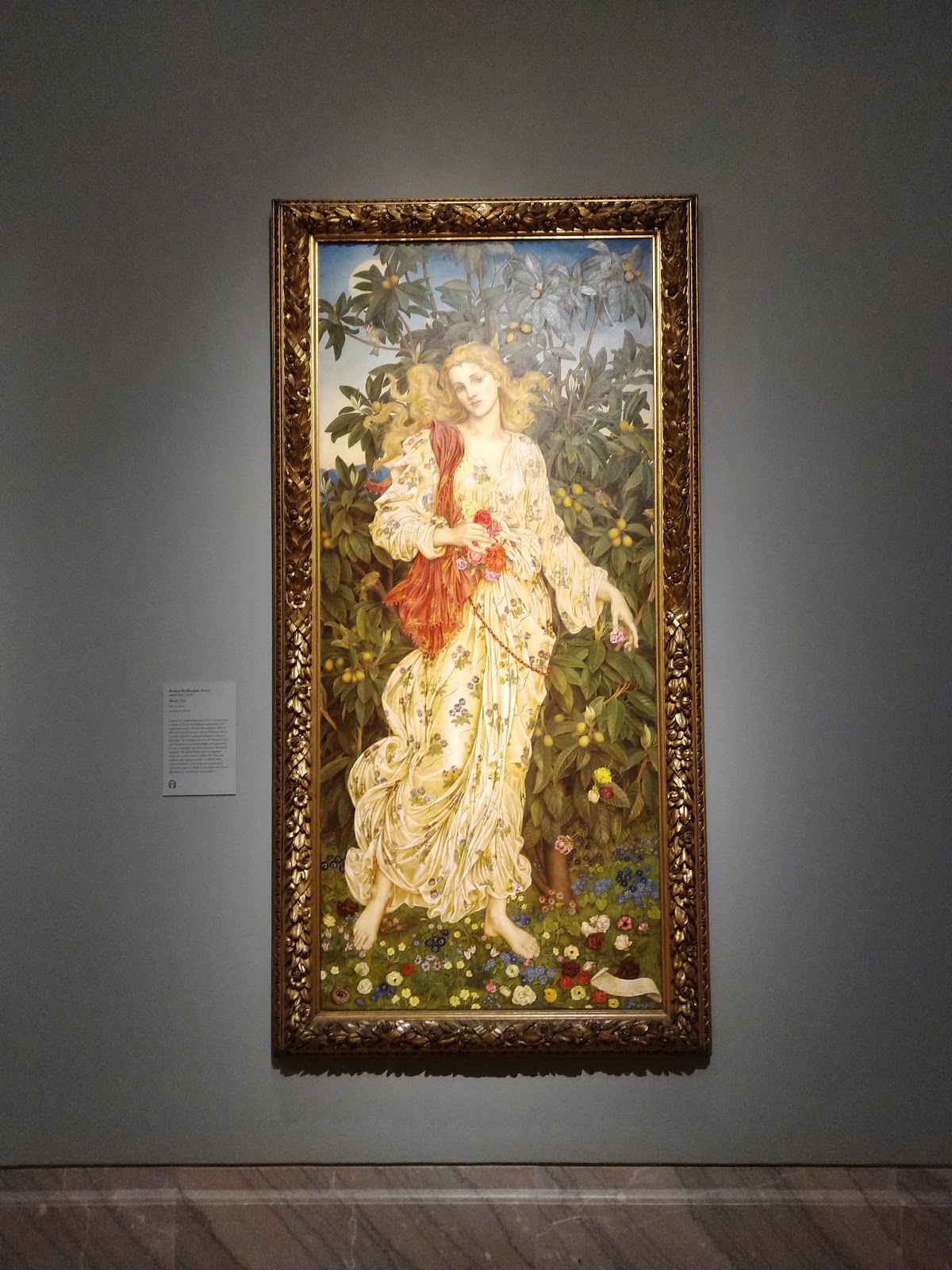 There’re more than just a few hints of Primavera here.

The term “Pre-Raphaelite” is really a misnomer, because Raphael and post-Raphael artists could be found on the PRB’s list of immortals (along with people like Homer, Jesus, Oliver Cromwell, and Tennyson! A motley crew). Artist Dante Gabriel Rossetti really came to admire late Venetian artists like Paolo Veronese as he moved away from earlier Pre-Raphaelite precepts and toward a version of painting concerned with aesthetics above all else. His richly wrought and glittering close-ups of women can be seen as spearheading the “Art for Art’s sake” movement. Inspiration for these sumptuous fabrics, luscious locks, and vague sense of morality can be seen in the works of late Italian masters. 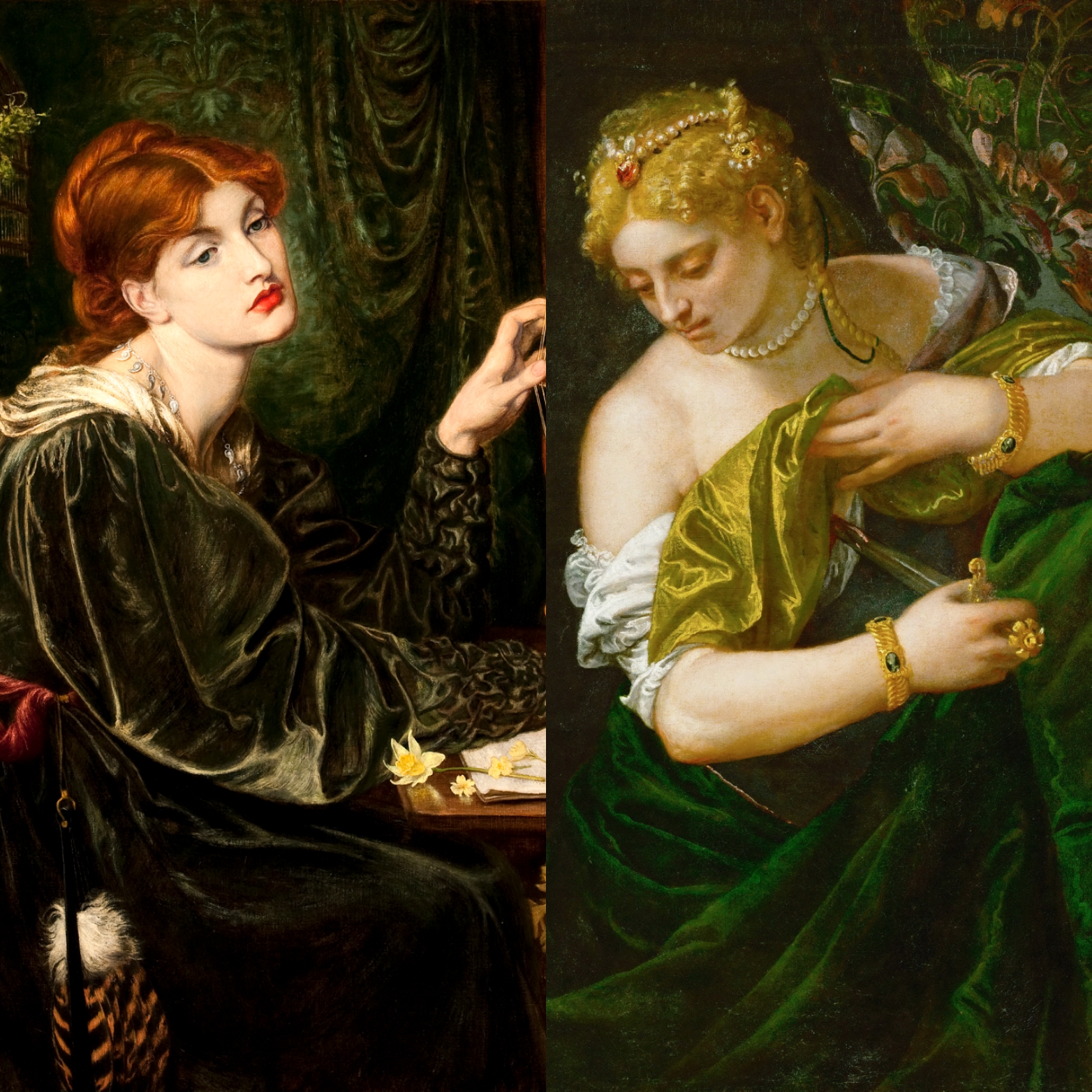 In the face of rapid industrialization, the Pre-Raphaelites became associated with a counter movement called Arts & Crafts, which sympathized with the PRB’s medievalizing aesthetic and guild-like formation. They lived by the words of William Morris, whose upholstery designs are on display, when he said, “Have nothing in your houses that you do not know to be useful, or believe to be beautiful.” (A maxim that is only ever relevant.) A number of furnishings such as cabinets, suits of armor, stained glass, and even an enormous tapestry, are on display which really round out the exhibit, showing how all-encompassing and radical this aesthetic really was. More than just a look, it was for many an entire lifestyle. Also, if you love book arts, you will find a fantastic selection of both medieval manuscripts and finely printed 19th century books such as the Kelmscott Chaucer, widely heralded to be the most beautiful book ever printed. 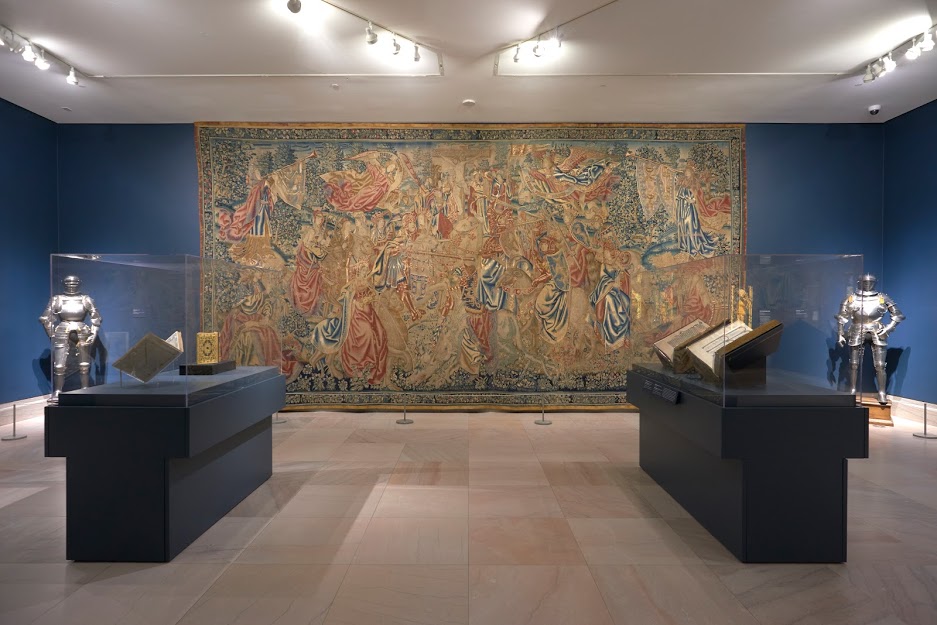 The grand finale of the show is William Holman Hunt’s monumental Lady of Shalott, a work that is worth the price of admission alone. It’s considered the last true Pre-Raphaelite painting and it's by the only one of the first three artists who believed he remained true to the group’s original goals. While hearkening back to both Northern masters Jan van Eyck and Southern greats like Della Robbia, it also beckons to the symbolist movement and Art Nouveau. It tackles Tennyson’s poetry and Arthurian legend, but it also reflects on Hunt’s own deeply held beliefs. A parable for the artist who is both gifted and cursed to complete his work in the face of the distractions of the world, the work pierces to the very heart of Pre-Raphaelitism. 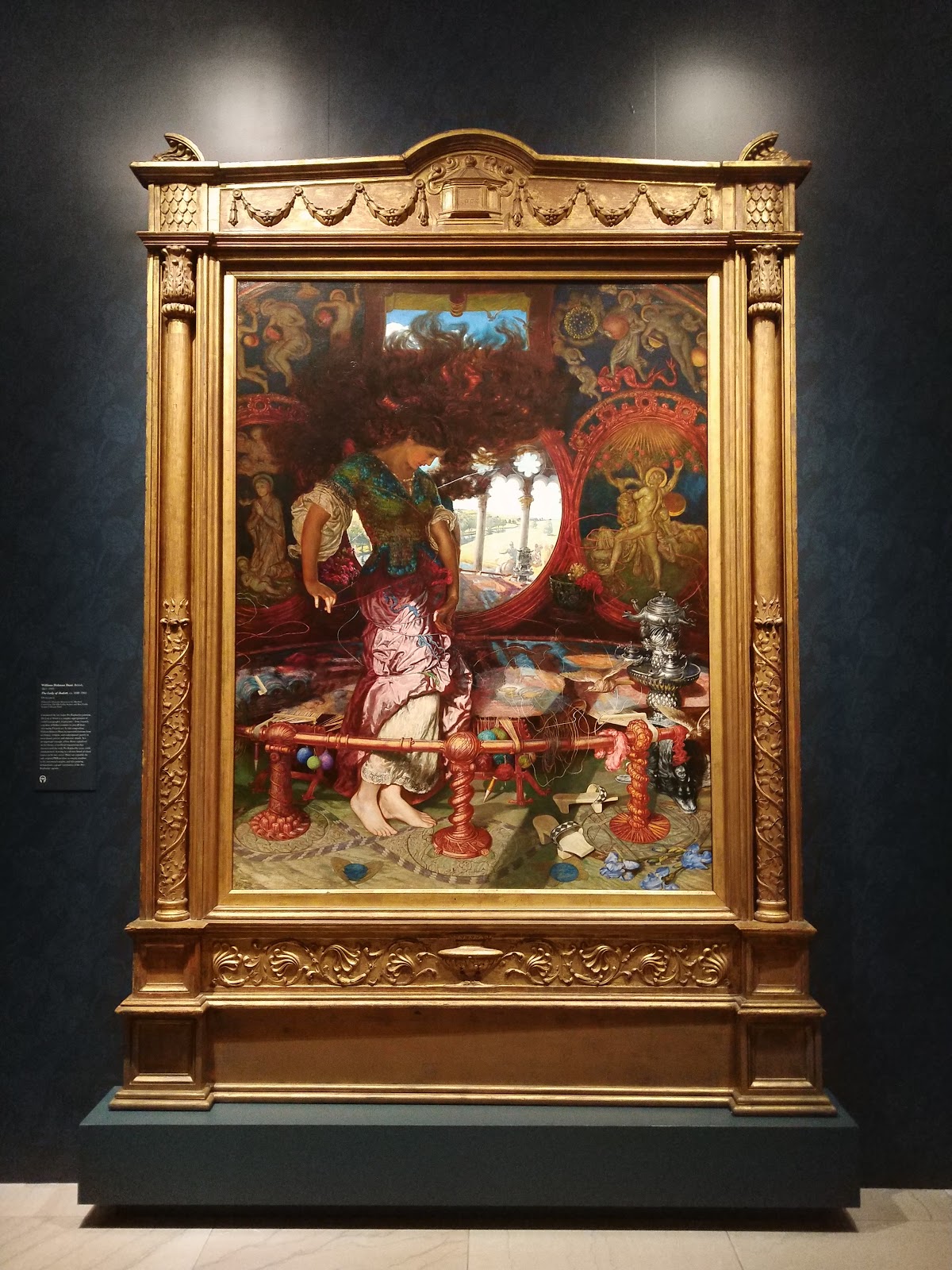 The Lady of Shalott by William Holman Hunt.

This show really invites you to consider how truth and beauty should be defined, and what the role of the artist is in the Great Conversation that has spanned the centuries. It also helps illuminate art in England at a time that is taken up in most art history books by French Impressionism. Radical things were happening in England, too, okay, Janson? And most importantly, it makes you wonder what a more accurate name for the Pre-Raphaelites would be? Memlingers, as was suggested, is a bit of a mouthful. Non-Raphaelites, perhaps? Anti-Acadamites? Radical Romantics? Almost anything’s more elucidatory than “Pre-Raphaelite.”

Prior to this show, I admit that I had little respect for the Pre-Raphaelites. They always seemed like the type of overly sentimental images enjoyed by teenage girls who are into fairies, and for that, I judged them. Hard. But this show contextualized their work and exposed me to the nobility of their goals, which really allowed me to open my heart up to them. And it has to be said, the PRB paintings are twenty times more stunning in person than they are in books. This exhibit is a must-see. It will glitter in your memory long after you have left the museum.

“Truth & Beauty: The Pre-Raphaelites and the Old Masters” runs until September 30, 2018.  More information can be found here.