Christopher Columbus was not the man your grade school teachers told you about.

It’s that special October day about the three boats crossing an ocean on a quest towards whatever gets me out of work today. I don’t remember much about Christopher Columbus or what he did or why he’s really that important so let me give this a quick Google-ing.

This is going to be like Paul Gauguin all over again, isn’t it?

It turns out there’s a lot of controversy surrounding Columbus day. After quickly skimming the three articles above I was left with more questions than answers. I took to Google once again armed with a nose for knowledge that is delivered in a convenient format that requires no extra effort from me.

Portrait of a Man, Said to be Christopher Columbus by Sebastiano del Piombo at The MET.

Let’s start with a little background. Columbus was born in 1451 in what is now Italy. Somewhere in the beginning of his teenage years he joined his first trading mission on the Mediterranean and Aegean Seas. In one such voyage, he traveled to the modern day Island of Khios near Greece. This would be the closest he would ever get to the Asia - the continent he spent all of his life trying to find a route to from Europe.

Wait for it, it gets way hilari-worse.

Let’s examine that painting by del Piombo above again. While it claims to be a portrait of Christopher Columbus is not actually a portrait at all as it was created more than a decade after his death. It may be surprising to find out no first-hand portraits of Columbus have ever been discovered so what he actually looked like is completely unknown. Though I do totally respect the ‘Steve Buscemi eyes’ Piombo gave Columbus, how did the guy who discovered the Earth was round not get a portrait? Oh, and who can forget about discovering America? Well, maybe it’s because Columbus did neither.

A lot of misinformation regarding Columbus’s supposed achievements came from the first popularized “biography” written by Washington Irving in 1828. You may not recognize Irving’s name but there's a really good chance you’ve heard of one of his other works: The Legend of Sleepy Hollow. Historians have long since eviscerated his ‘historical’ account of Columbus but the damage was done and the story stuck. So what exactly did Irving get wrong? 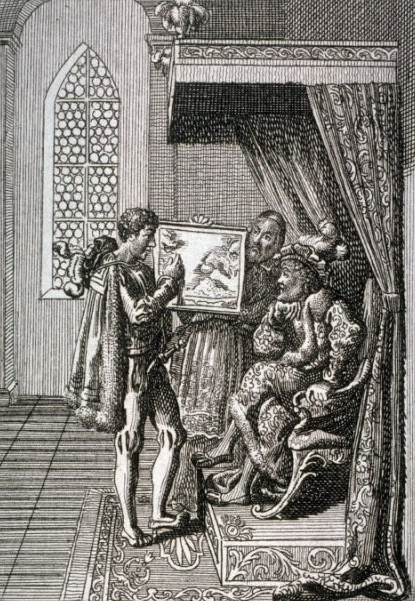 Columbus offers his services to the King of Portugal by Daniel Nicholas Chodowiecki at the Fine Arts Museums of San Francisco.

Irving's misunderstanding begins when Columbus was trying to finance his initial voyage. Columbus went to every royal who could afford the upfront capital, but like a microwave with a baby setting on Shark Tank, his investment opportunity was turned down every time. While historians have concluded this was due to the discovery of the Cape of Good Hope in 1488, Irving had another theory. He believed Columbus alone knew the Earth was round and everyone else was just stupid. 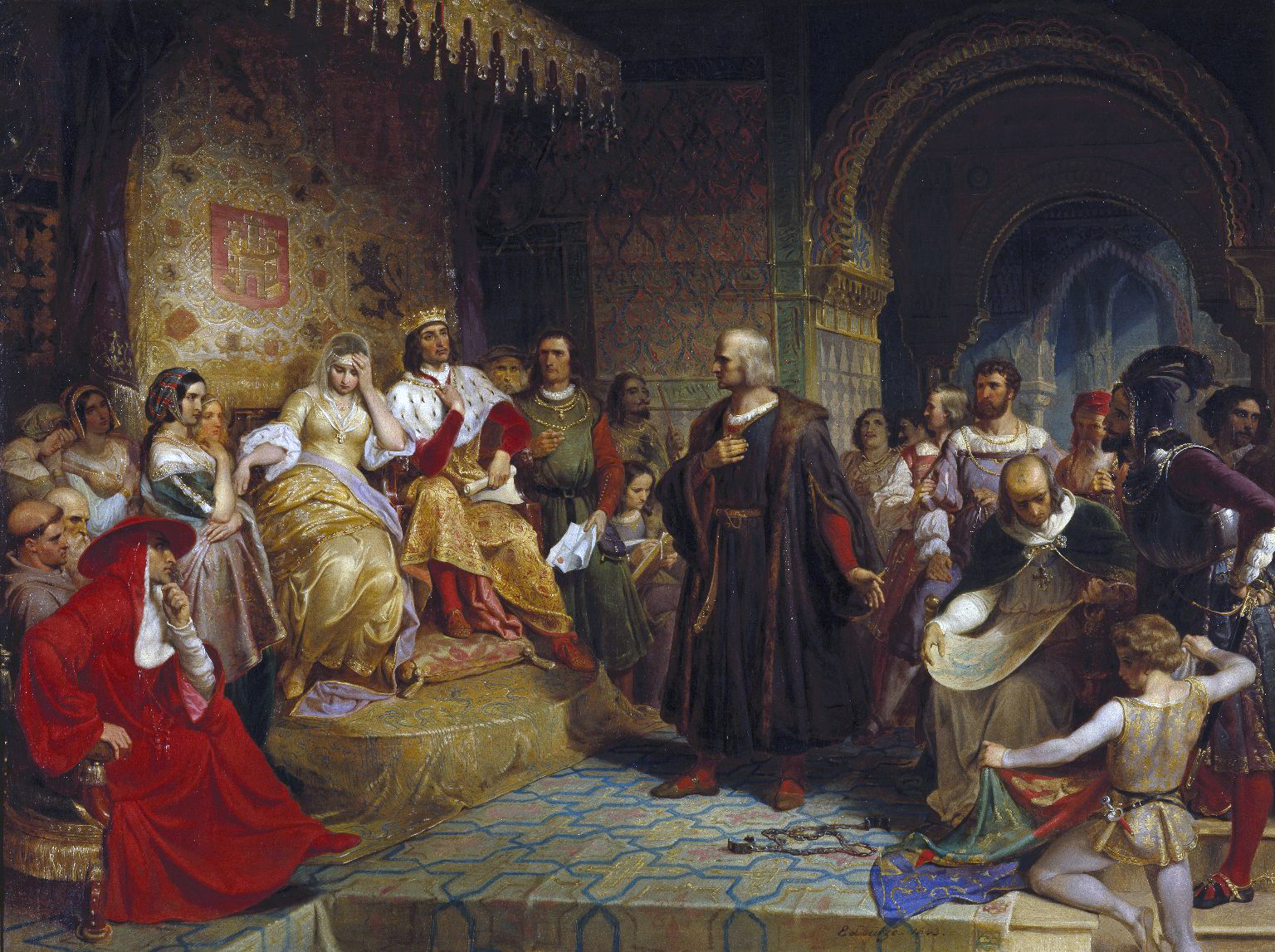 Columbus Before the Queen by Emanuel Leutze at the Brooklyn Museum.

At this point, Columbus had been rejected by every major power in Europe. Instead of admitting defeat, he approached the monarchs of Spain (above) and was turned down for the same reasoning used by Portugal. However, Spain did not want his ideas to travel elsewhere so they provided him with free lodging and food for two years allowing Columbus to focus on pestering the crap out of the crown. For. Two. Continuous. Years. Finally, as Columbus was leaving Spain, they granted his request. 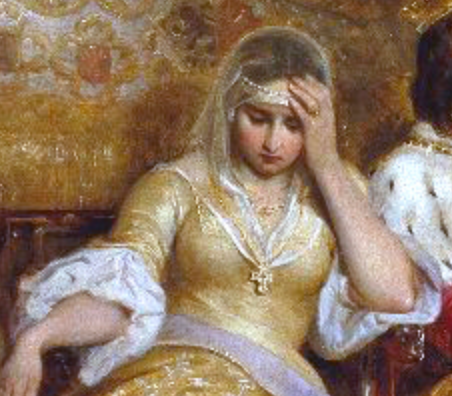 “OHMYGOD, FINE! WILL YOU SHUT THE F**K UP NOW?” - Queen Isabella I of Castile, probably.

The sudden change of heart can be attributed to Spain winning its war against Granada. As a result, Spain had significantly more resources to utilize for ventures that might seem risky. A group of influential advisors to the Spanish crown were convinced that little would be lost if Columbus died during his voyage but much could be gained if Columbus happened to find anything. An agreement between the Spanish government and Columbus gave him three ships, the guarantee of title and 10% of whatever he found if he ever returned. 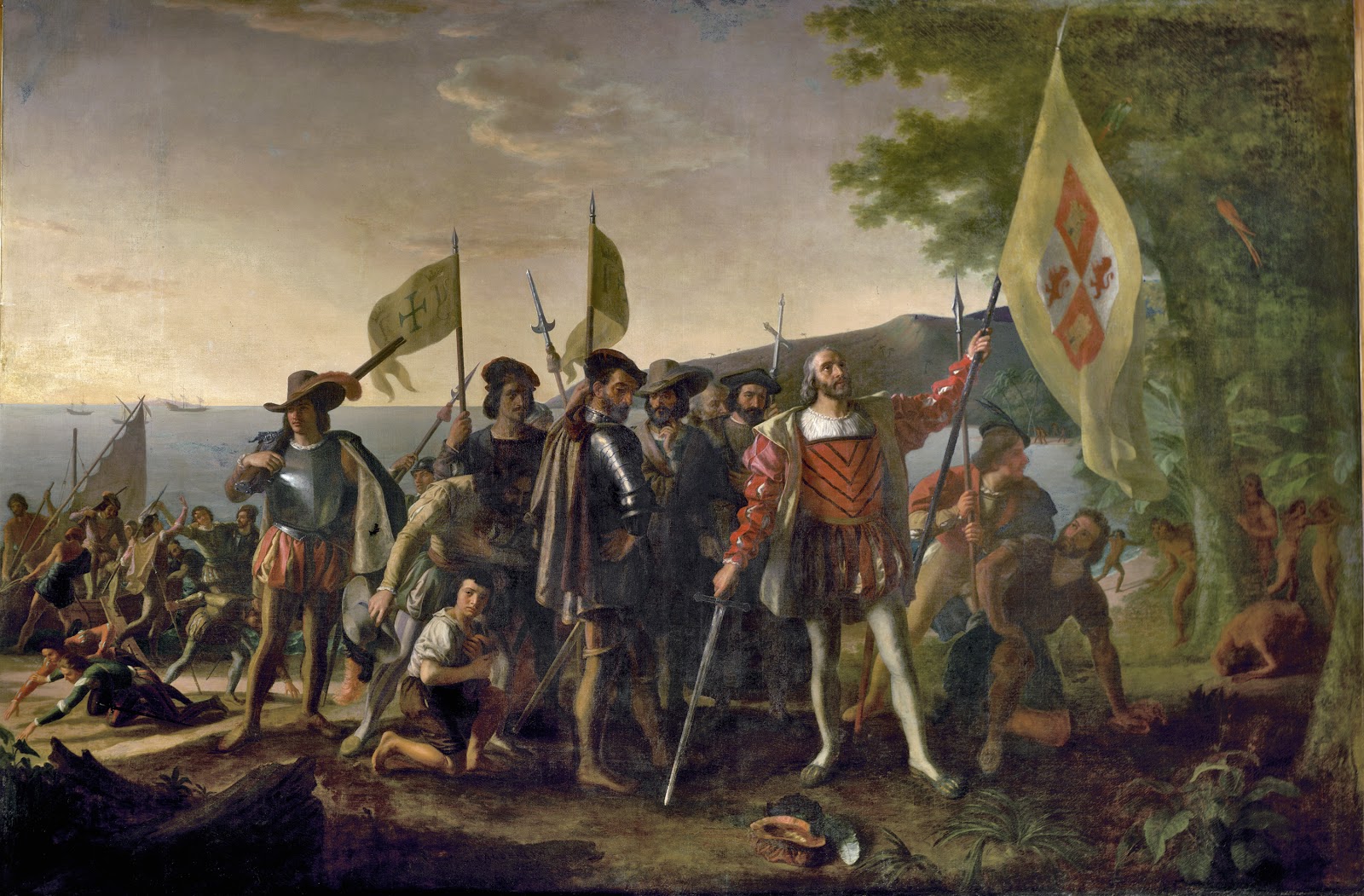 Landing of Columbus by John Vanderlyn at the U.S. Capitol.

Columbus finally sailed the ocean blue in 1492 and several weeks later his voyage discovered the island of San Salvador, Cuba, and Hispaniola in the Caribbean. This is where Columbus encountered the native Lucayan, Taíno, and Arawak populations which were described as peaceful and friendly. Oh, and they happened to wear gold and be about a thousand years behind the Spanish in military capability. Fun!

The history of every native population ever.

Columbus believed he had found a fantastic source of gold. He quickly sent word back to Spain and, well, here’s a small selection of what he wrote: “I could conquer the whole of them with 50 men, and govern them as I pleased.” Before returning to Spain, he kidnapped dozens of natives, explored a selection of islands, and wrecked the Santa Maria - his flagship - during an unauthorized expedition and used it as target practice. 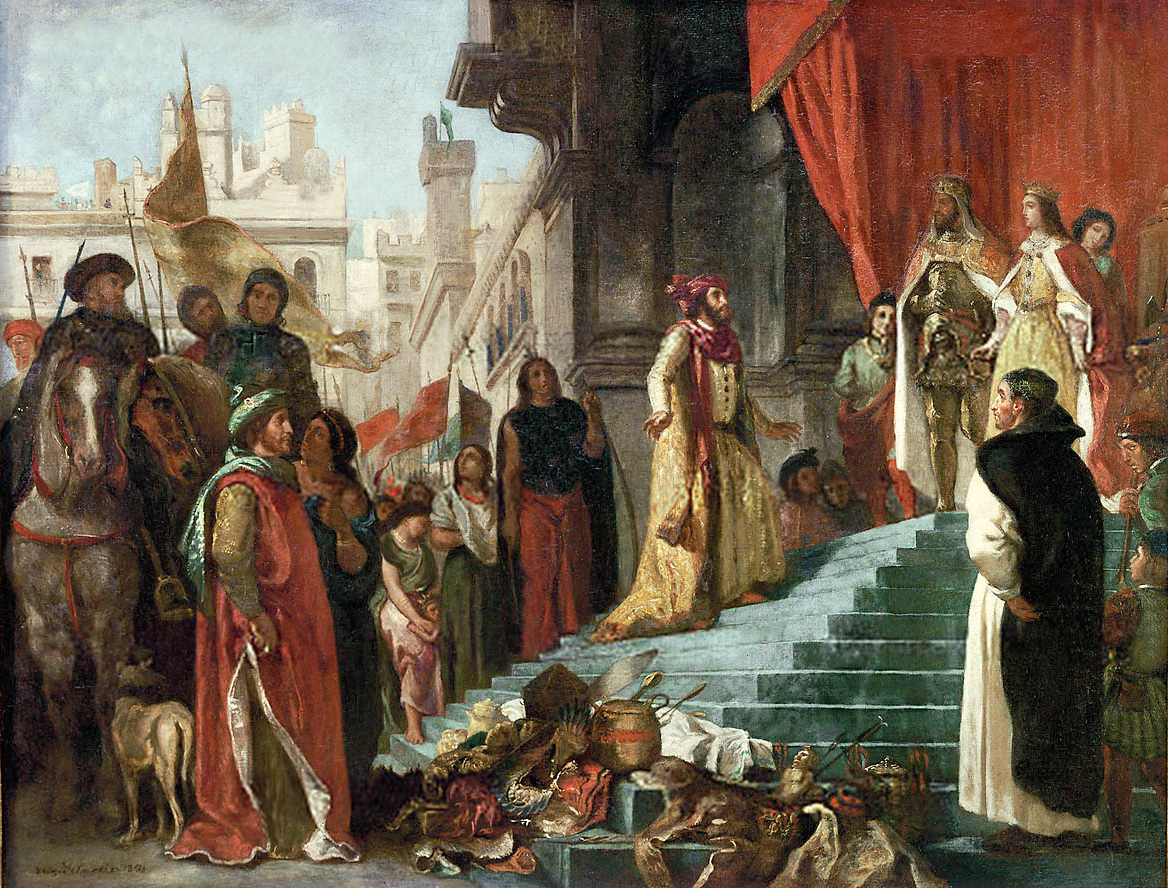 He returned to the Spain and was was awarded the title of Admiral and Governor of the (West) Indies he was promised and provided the resources necessary to settle the lands he had discovered. He would make three more voyages to and from the Caribbean and each would get progressively worse for everyone involved. His second voyage in 1493 brought thousands of Spanish colonists but by the end of 1494, two-thirds would die by either famine or disease. Meanwhile, Columbus established a strong slave trade in the Caribbean which is credited for being the first transatlantic slave trade to Europe. When native captives began to die at high rates this diminishing profitability, Columbus decided to switch to another form of horrible money-making. One that was much, much worse.

Columbus demanded all natives over the age of thirteen to deliver a specified amount of gold every three months. In return, each native would be given a copper token to hang around their necks. Those who were found without this token would have their hands cut off and were left to bleed to death. As Columbus grew ill, chaos among his population and native rebellion became unmanageable. News of the chaos reached the Spanish crown who, in turn, sent Francisco de Bobadilla in 1499 to investigate the claims of mismanagement by Columbus and his brothers. When Bobadilla reached the colonies, he uncovered testimony claiming Columbus and his brothers would frequently parade dismembered bodies through the streets to secure dominance and quell native uprising among other atrocities. When Bobadilla’s report reached the crown, Columbus and his brothers were arrested and ordered to return to Spain to face trial.

Columbus’s defense of his action. Columbus and his brother’s were jailed for six weeks until they were released and were given an audience to the Spanish monarchy. After begging for mercy, their freedom and wealth were restored but the titles of Admiralty and Governor were permanently revoked. And, for some reason, he was given money for a fourth voyage because why not. 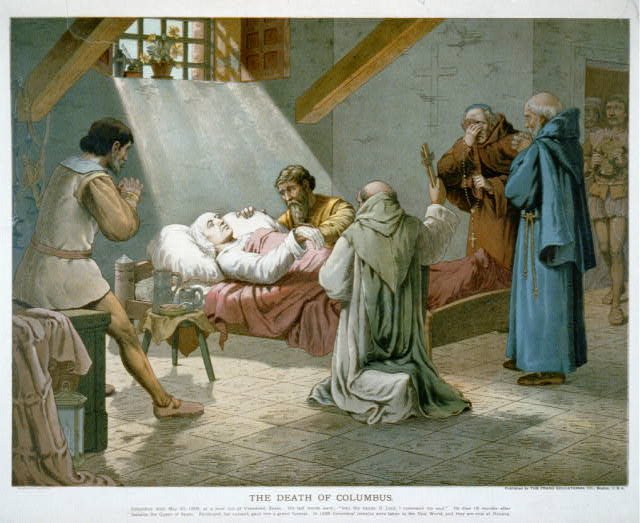 Columbus died in 1506 in Spain following his fourth and final journey to the Caribbean. Much of his later life was spent suing the Spanish crown for the 10% he was guaranteed but the crown felt it no longer required of them due to the whole tyranny thing. He would die long before a settlement was reached and would leave a vastly unpleasant legacy. By 1548, 56 years after Columbus took his first steps on San Salvador, over 99% of the native population he encountered had been killed by disease and violence.

Historians still debate whether or not Columbus even realized the nature of his discovery. In some of his journals, he described an unknown continent but in later letters continued to claim the lands he discovered were on the east coast of Asia. Even the discovery of America by a European can’t be attributed to Columbus as the Vikings had stumbled upon the continent centuries prior to 1492. His only contribution is bringing the knowledge back to Europe that land existed within the reach of colonization which was a direct result of his stupidity. He was not a hero. He was not a pioneer. He was lucky. And all this may lead you to ask:

And that’s another story for another day.