Patrick Kelly: Runway of Love at the de Young Museum 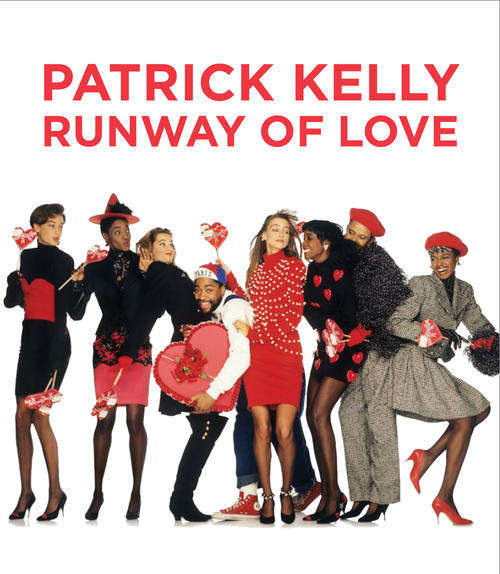 San Francisco’s de Young Museum is a standout among other fine arts museums across the country as one of the few that really devotes itself to sharing fashion history. While they aren’t specifically a fashion museum, their commitment to special exhibitions related to fashion and textile arts is astounding. The new exhibit, Patrick Kelly: Runway of Love, is just another stunning example of this commitment.

This exhibit shares the work of fashion designer Patrick Kelly, who the world lost too soon (in 1990, due to AIDS-related complications). The exhibit showcases about five years of his work as a fashion designer, which is such a brief period of time. Knowing that his working life was so short, it’s astounding to walk into the rooms and see such a bounty of impressive work.

The exhibition begins with a room that shows a handful of his works on the runway. Each one is stunning in its own right. Patrick Kelly was known in large part for his experimentation with buttons. Buttons weren’t just details for him; they were art. The exhibit explains that he remembers as a child in Mississippi when he would lose a button on one of his items, his grandmother would diligently bring out her collection of mismatched buttons and sew one on. This inspired him to later collect buttons and make them the absolute star of his pieces. In this first room, we see an entire bustier made of colorful encrusted buttons; in another room we see a similar approach to creating a bolero. 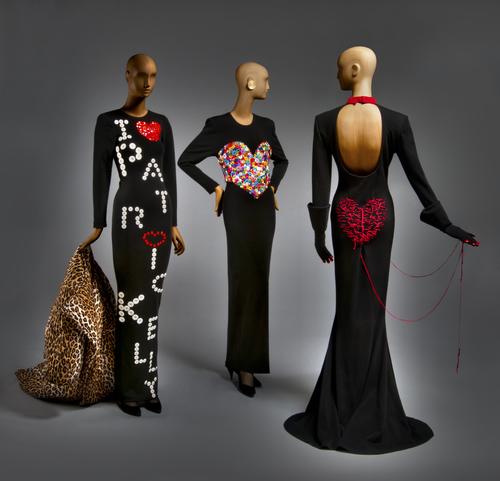 Later, his work would have to shift as the world caught on and demand quickly rolled in. In his early work we get to see unbridled creativity in one-of-a-kind pieces that are purely about making beautiful art. Of course, you can’t quickly produce couture-quality pieces like that. He had to adapt his later art to consider the production process. So, for example, he would sell knit dresses with the buttons separately. This allowed individuals to customize their dresses while also making things go more smoothly from a production standpoint.

Each room in the exhibit includes more than just the mannequins wearing the beautiful clothes. There are videos of his runway shows playing on the walls, bringing life to the clothing. Moreover, there are sketches, collages, photographs, and memorabilia. Being a great marketer, Kelly had some really fascinating artistic invitations to his shows, which we get to see in this exhibit. Along with this are some great photographs of him including a set in which he’s posed like two of his favorite designers: Schiaparelli and Chanel.

Kelly knew his fashion history and those inspirations run deep in his work, but yet, his work was entirely his own, influenced by a number of different sources. Being from Mississippi, he was always influenced by the clothes women wore to church on Sundays. Being in the New York and Paris LGBTQ+ community, he was influenced by Vogue and other club scenes. His fashion incorporates those influences through the lens of his unique point of view.

The first few rooms of the exhibit are small. And then you head down a short hallway where you’ll see a trigger warning: 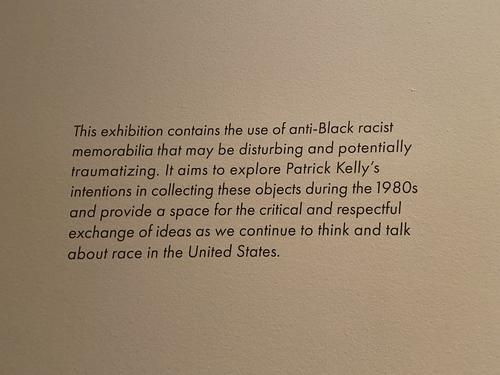 You turn the corner and at first all you see is an amazingly huge room filled with colorful, fashionable mannequins. It’s stunning. Then, as you collect yourself, you get the chance to see that there are different areas to the room. You’ll see a small display of Chanel-inspired tweed suits, for example. On one end of the room is the area that the trigger warning is about. Signage explains how Kelly would collect racist memorabilia and reappropriate it to raise awareness about Black issues and remove its power as anti-Black imagery, incorporating it into his designs and adapted as the brand's logo. 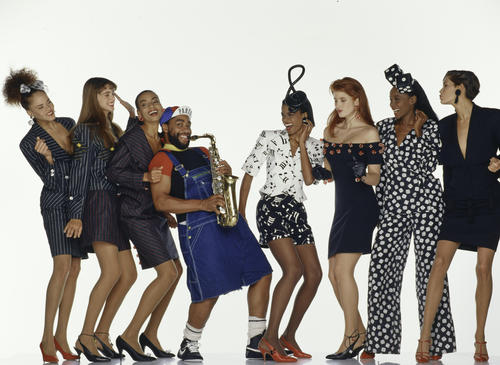 At the press preview, we were lucky enough to hear from his life and work partner, Bjorn Guil Amelan. He shared how early in their relationship he had been at a flea market when he purchased a gift he just thought as funny for Patrick’s birthday. When Patrick opened the gift, he explained to his partner that this was actually racist memorabilia. However, as Amelan says, “instead of reading me the riot act, Patrick said that we should collect this stuff.” And so the collection began, both of them enjoying traveling together to antique stores and flea markets and so forth, collecting this memorabilia. This collection, and its inclusion in the exhibit, is certainly not without controversy. But Patrick Kelly is one of a handful of Black designers who directly addressed race in his clothing in this way, so it’s a key part of his legacy.

If you are interested in learning more about this aspect of the exhibit, you can watch a Virtual discussion at youtube.com/famsf that will cover this topic.

In 2020, a group of Black fashion designers launched The Kelly Initiative in Patrick Kelly’s honor. The goal of this initiative, which consists of 250 Black fashion design professionals, is “to bring greater visibility to their experiences within industry and actively posit solutions via which their long-overdue equitable access to employment opportunities can be obtained.” Kelly’s working life was brief, but it made a huge impact on fashion history, and it continues to inspire designers today.

Kelly’s role as an LGBTQ+ community member is mentioned in this exhibit although it is not a huge focus. He was diagnosed in 1987 and passed away in January 1990. At the time, AIDS was a death sentence and there was so much stigma about it. As a result, and in order not to lose financial backing for the work he was producing, he kept this information very private.

Kelly’s former business and life partner Bjorn Guil Amelan will do a virtual talk with others about the impact of AIDS on creatives in the 1980s at youtube.com/famsf on 3/30/22 at 5 pm PT.

In 1988, he became the first American designer and first Black fashion designer elected into the prestigious French association called Chambre Syndicale du Pret-a-Porter des Couturiers et des Createurs de Mode. Among other things, this allowed him to present his designs at the Louvre. In the exhibit, we see his Spring 1989 Collection, in which he imagined that the Louvre’s famous Mona Lisa had invited him to show his work there. We see many different Mona Lisas wearing his clothing in this part of the exhibit.

Hopefully museum-goers will visit several times to absorb all of the innovation, growth, and inspiration he produced in his five years. His social, political, and cultural impact on fashion history can’t be overstated. But even if you’re just someone who loves fun, colorful, inspiring, thoughtful clothes, you’ll delight in this exhibit.

Patrick Kelly: Runway of Love shows at the de Young Museum in San Francisco from 10/23/21 to 4/24/22. This is the only West Coast venue showing this exhibit.

Reminder: Judy Chicago is also on exhibit at the de Young Museum until 1/9/22.

Runway of Love at the de Young Museum!