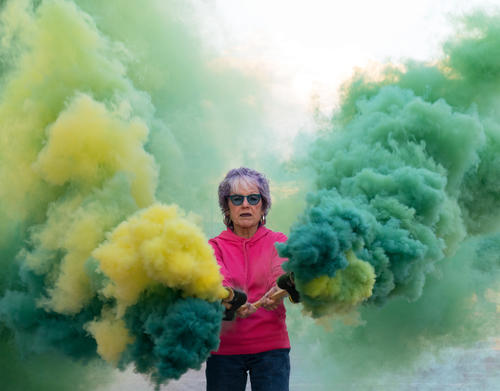 Judy Chicago is unmistakable. She walks into the room where she’s about to speak of her first retrospective exhibit, a curated collection of pieces from her six decades of work, wearing a colorful mask and a glittering vest, her hair bright purple except for a white streak right down the center. She presents as bold, courageous, and forward-thinking as her feminist, socially-conscious work has always been. Then her voice cracks just a little as she begins to speak about what it means to her to be back in San Francisco, showing this entire body of work at the De Young Museum.

If you only know a little bit about Judy Chicago, then you probably know The Dinner Party. This triangular table features 39 ceramic place settings, each with a vulva-inspired form at the center, each representing a famous woman who should have been even more well-known than she was at the time the work was created in the 1970s. Chicago’s work has always held a goal of countering the erasure of women’s creativity by placing women and their art front and center. The Dinner Party was a prime example, and it debuted here in San Francisco more than forty years ago. 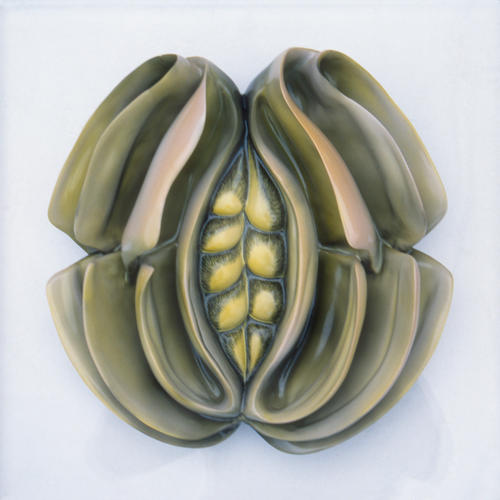 Although it is her most well-known work, The Dinner Party was never an easy piece of work. It took years to create. Like most of her work, it left her marginalized and even villainized for daring to express womanhood and the value of women’s creativity so boldly. Museums and galleries didn’t want to show it. The tour collapsed and the work went into storage. Eventually, though, public demand by other marginalized artists and art-lovers brought it back out into the world. It was an example of women supporting women, as they created spaces for the installation to exist all around the world. Chicago notes that this was just one example of a time in her life when she saw her art “compel action and create change.”

But that doesn’t erase the years that The Dinner Party languished in storage. It doesn’t erase the feelings she experienced when she had to read terrible reviews of her work, including arguments that she couldn’t even draw. She says, “I started drawing at age three. I started drawing lessons at age 5. Living and drawing are synonymous for me.” She found herself in debt, struggling, and with not much at all to her name. In fact, two of the largest installation pieces in this retrospective exhibit are reproductions because she had to destroy the originals due to lack of funding for storage space at the time. What she did have in the wake of all she lost after The Dinner Party was a whole bunch of letters that women had sent to her saying that if she ever did something like this again, they would happily volunteer their needlework skills for a next project. 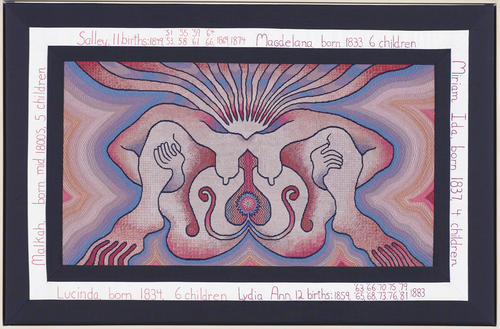 And so, "The Birth Project" was born in the early 1980s. Much of this work is needlepoint. Chicago can neither sew nor stitch, working instead with volunteers who influenced the work by the very domestic lives that they lived. Throughout the project, Judy sometimes got frustrated at the slow pace of stitching. However, that only motivated her to expand the work. She hung a huge piece of black paper on the wall and began to draw on it, without planning what she’d create in advance, which is unusual for her. Four months later, she had a finished drawing, and no idea how to get it off of the wall. She found someone to put a backing on it, paying off the cost of that $100 per month for five years. It hangs in the exhibit at De Young Museum today.

Obviously, you’ll find a room dedicated to each of these two major Judy Chicago bodies of work. However, the exhibit actually starts with her newest work, working backwards to these earlier pieces. The exhibit’s curator, Claudia Schmuckli, explains that there were multiple reasons for this presentation. First of all, it’s simply surprising. We should be surprised by art! Second, it’s a chance for people to see work that the artist is less known for before becoming too immersed in the story of her whole body of work. Finally, though, and most importantly, it’s a way of subverting the narrative and questioning the rewriting of history. 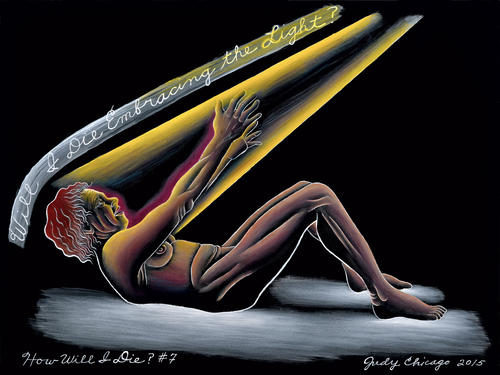 And so, the first room of the exhibit is titled, “The End.” Within you'll find a body of amazing work exploring death and extinction. Walk in and you are immediately confronted with a relief sculpture of the artist herself on her deathbed, holding flowers. All of the work shown to the left of this is a questioning of death and individual mortality. Text has always been an important part of all of her visual art, and she writes directly on the images to convey the totality of her intention with each piece. On these we see questions wondering how she might die: in her husband’s arms? In her bed with her cat by her side? 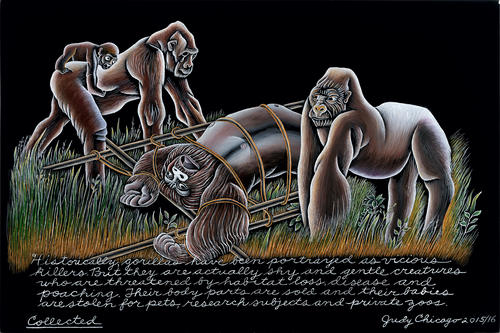 Return to the deathbed relief sculpture and move to the right this time, to a body of work that is similar in style but explores the loss of endangered species. Two parent penguins with a baby between them have text that shares how Galapagos penguins mate for life and both partners incubate the baby; this is covered over by additional text noting that they are vulnerable, with only 1600 pairs left. Turn the corner and you see on the wall, directly behind the deathbed relief sculpture, a second relief sculpture depicting endangered animals. There is a lot to be said, thought, and explored in this body of work about individual mortality and the mortality of the earth, about what we as individuals and as a collective humanity are doing to the world around us and how rapidly we are doing so. There is much to be said to enact the change this art sparks in you. But first, before the exchange of any of those ideas, is the visceral experience of being in this room with this work. 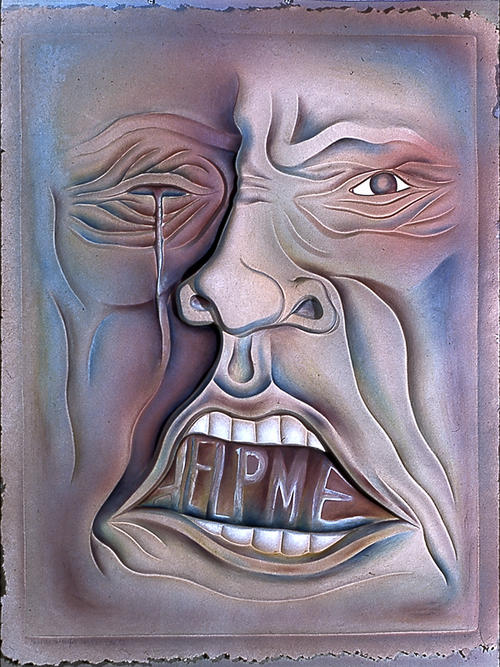 Moving through the exhibit from this late stage work all the way back to her earliest minimalist pieces, we begin to see patterns and themes. The artist herself said that the way that Claudia curated the work helped her to see some of her own patterns. For example, the room of “Power Play” work is all about the performance of masculinity. Chicago refers back to a piece in “The End” depicting information about how we fin 100 million sharks per year, and asks, “is it any wonder that this horrifying work, done mostly by men, comes about in a society where the performance of masculinity forces them to detach from their emotions?” She may not have seen the connections at the time she created her work, but the thread was always there.

Each series in her collection takes years to come together. She believes first and foremost in content. She delves deep into research around the topic that interests her. She reads, she talks to people, she studies, she thinks. One of the most unique aspects of this retrospective is that it also includes some of her travel journals and sketchbooks, depicting works in progress and ideas as they were developing. Even the most avid Judy Chicago fan will find something new in the exhibit thanks to these additions. She cares about color and form. The medium is always chosen to match the topic. But first and foremost, she cares about content. She creates art that is about issues she cares about to motivate other people to care by making the topic accessible.

When she was in San Francisco decades ago debuting The Dinner Party, she was told, “this is the culmination of your work." But she has continued to create new, engaging, innovative, prescient work for decades more. She says that now, with this retrospective, she’s come to the culmination of her work. At the end of her artist talk, her eyes welled up with tears, and she paraphrased the words from the stained glass image of her Holocaust series: “I hope art helps lead us all from the darkness that we are in to the light.” Bold, strong, seemingly sure of herself, she has spent decades shedding her own light on the problems of the world, and yet seems to remain hopeful, rather than jaded, about the idea that change is possible through art.

Judy Chicago: A Retrospective is at DeYoung Museum in San Francisco from August 28, 2021 through January 9, 2022. Mark your calendars for October 16th, 2021, when the artist will return to the front lawn of the exhibit to create a brand new smoke sculpture, an extension of her Atmosphere series, called “Forever DeYoung.”