‘Frank Stella: A Retrospective’ a Must See

Sartle was invited to check out the press preview for the de Young’s newest exhibition, Frank Stella: A Retrospective. This was great at face value for a number of reasons. First and foremost, we’re YUGE fans of the stellar Frank Stella. Second, free coffee in the AM. Third, swag y’all.

The most important takeaway, however, was the immediate realization that this is a monumental-blow-your-mind-must-see-change-your-perspective-on-life kind of show. 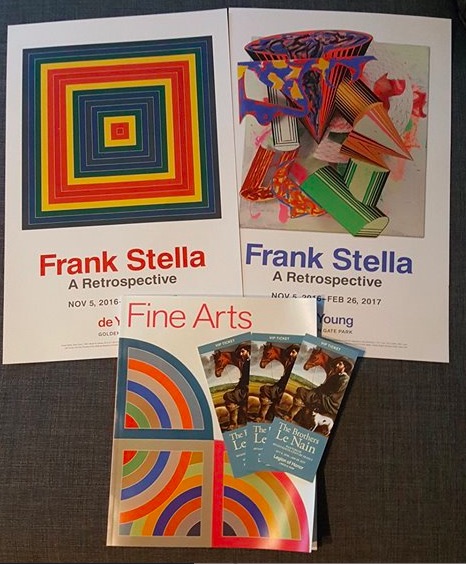 The show is composed of 50 artworks (or 60, if you count the smaller pieces grouped under a single label) that span Stella’s nearly 60-year career. While the show is basically chronological, works from different series and time periods are intermingled to highlight how some ideas keep cropping up. Visitors who don’t know much about the artist going in to the show (ahem, like moi) are presented a pretty convincing case to consider Frank Stella as, perhaps, America’s most important living artist.

For one thing, the exhibition is a sampler of Stella’s immense catalogue. It’s almost an underestimation to describe his career as a lifetime devoted to creating art. His catalogue boasts some 1000 artworks spanning “traditional” painting, to sculpture, to photography, to 3D-frickin’-printing. That’s right, Stella, at 80-years old, is pioneering the merger of art and tech. These objects made on the ol’ 3D printer range from just a few inches to nearly 10-feet tall. They give a glimpse into a new frontier where technology can make any human artistic fancy into a tangible reality. The result as shown in the exhibition is ornate, meticulous, organic, and just plain cool. 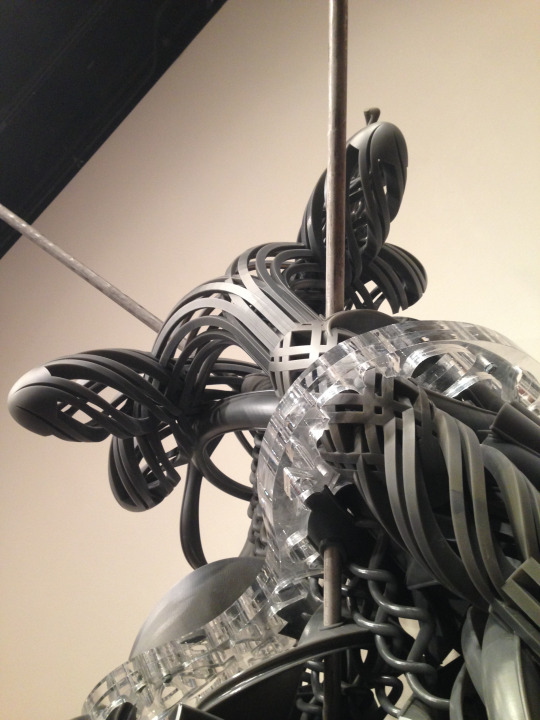 A taste of the largest piece from Stella’s foray into 3D printing.

Any cuts to the show’s roster have left its overall story unaffected. More art is always better, for sure, but the impact between this and its original incarnation can’t be much different. It’s just too much fun, too informative. Frankly, Frank Stella is an art god. How can you go wrong with the art god’s work?

Enough talk. Here’s some pictures of the art that should entice you to go to the de Young and see it all live and in color. The show runs now through February 26, 2017. Skip the line and get your ticket by clicking here. 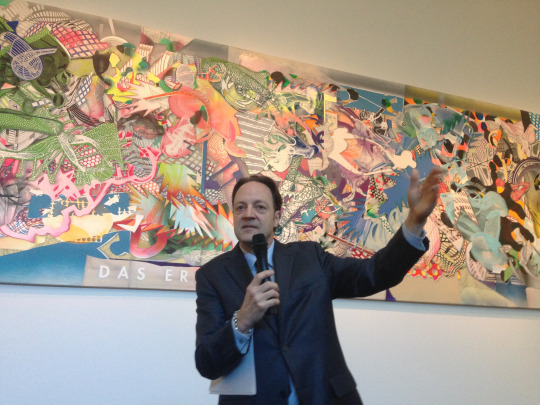 The exhibition starts upstairs with The Earthquake in Chili, a mural by Stella owned by the Whitney that’s vaguely reminiscent of Guernica and visualizes a novel about a devastating Chilean earthquake. The show’s curator, Tim Burgard (pictured above), explained that the mural is lousy with numerous Easter eggs that, together, probably prove Stella to be one of the most art historically learned artists working today. Sadly, we had to keep moving on the tour before Tim could elaborate, so we didn’t catch exactly what he was talking about. Drop us a line, though, if you have any ideas. 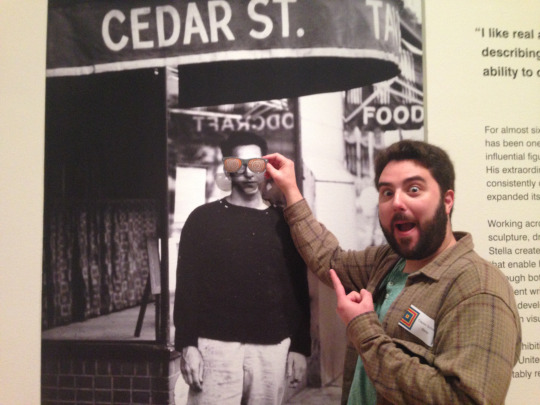 Me, being a goof and forcing a pair of Sartle glasses on a photographic portrait of Stella featured at the show’s start. But, everyone looks good with the Sartle goggles. So, you’re welcome Frank. 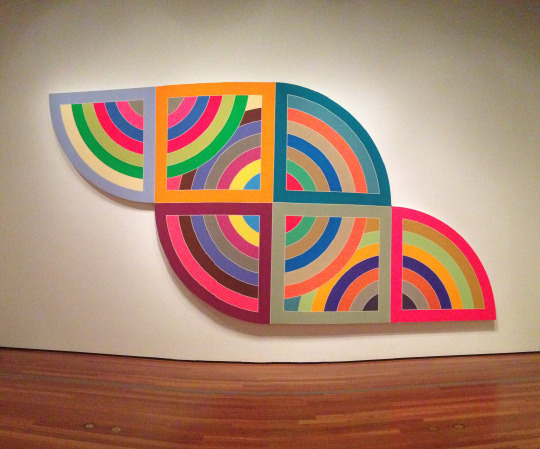 Harran II by Stella, owned by the Guggenheim in New York. 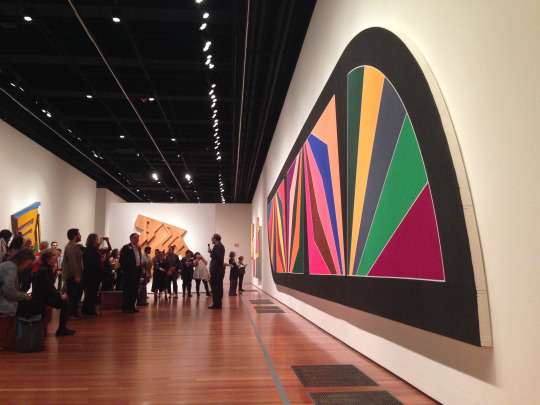 Damascus Gate (Stretch Variation III). This is easily one of the show’s highlights. It’s a gigantic wall mural that Tim the curator compared to Henri Matisse’s Dance (II). 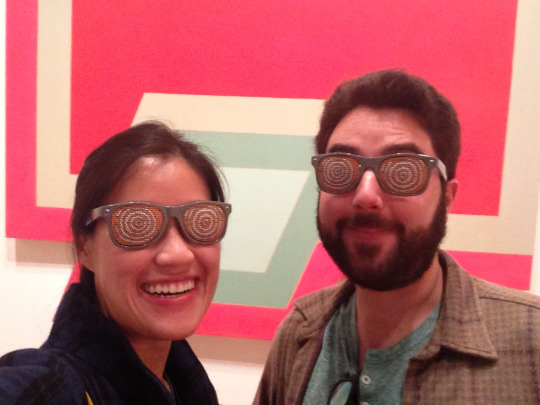 Again, those glasses look great on anyone and everyone. People would be wise to keep in mind that Sartle has a store coming soon… just saying. 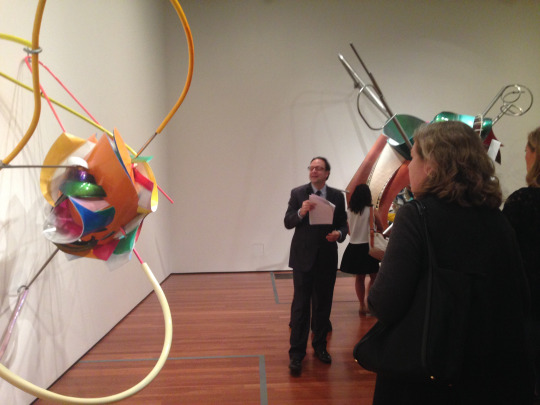 A “painting” from the show’s tail end near the exit to the gift shop. Stella maintains that all his works are paintings. Which, as you can see here, seems to clash with what the rest of the world usually describes as a sculpture. However, one of Stella’s principal beliefs, and one of the thoughts he’s explored throughout the decades, is that painting is more than just putting a scene on a canvas like it’s a window you’re looking through. For more info, you should really go to the show.

By Clayton SchusterPhotography by Lauren Dare

I wanna know how Stella gets his impossibly smooth surfaces. They are just so smooth...