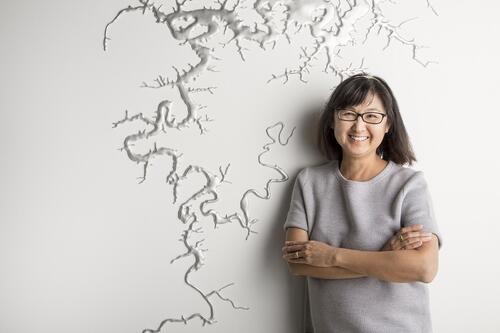 In the predominantly European dudeified world of architecture, Maya Lin always knew that she would stand out. "Technically, legally, I'm not licensed, so I'm a designer," she says carefully, but almost all of her work relates to the earth and structural productions, especially her most famous work, the Vietnam Veterans Memorial. If it walks like a duck, it might as well be a duck, and Maya Lin is architect enough for millions of people. 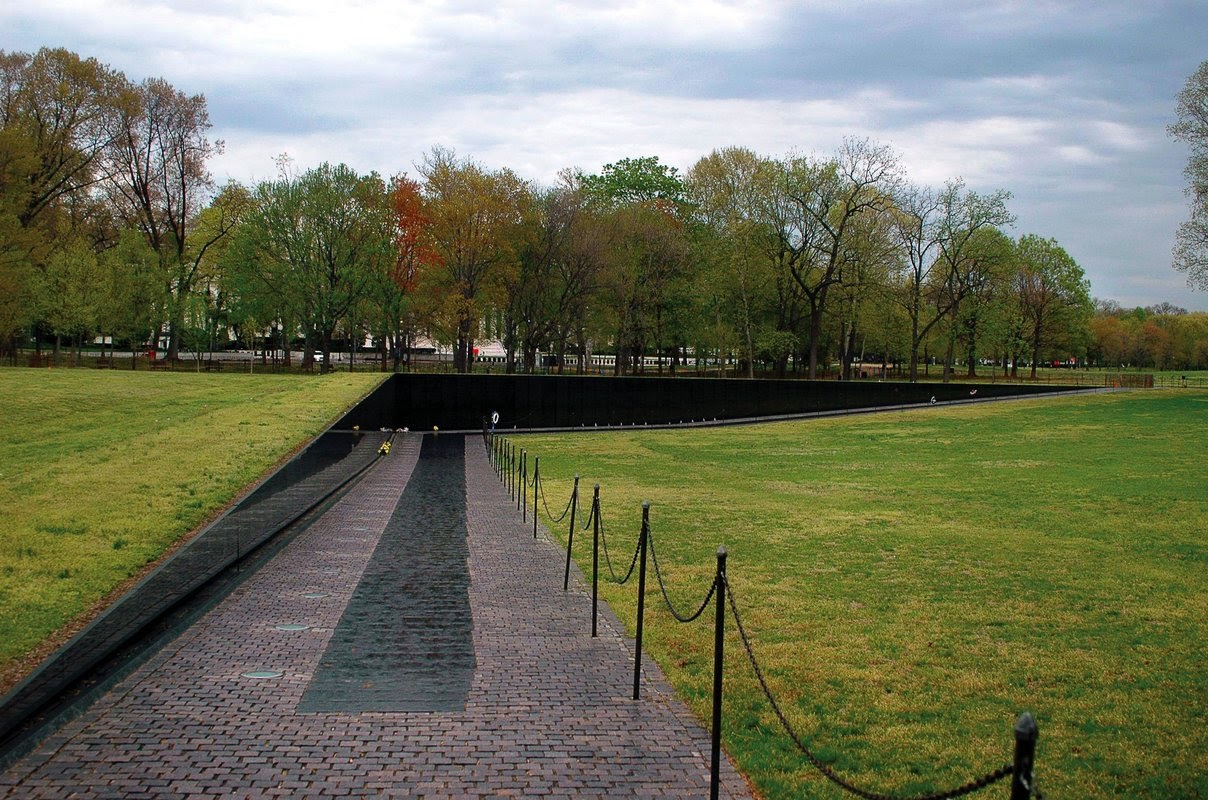 For reasons that I don't need to explain, war is such a touchy subject that almost anything you do, as an artist, is "too soon," and Lin's most famous Greatest Hit is no exception whatsoever. It made former Presidential candidate Ross Perot so angry, for example, that he called her an "egg roll."

So why the kerfluffle over this masterpiece? First of all, Lin maintains, she never would have been selected from a list of 1,421 applications for the Memorial if they had known that she is a woman of Chinese descent, because apparently racism toward Asian people, in the minds of many people, was part of honoring our fallen men and women in uniform. Lin would say that these kinds of bizarre reactions were a symptom of our inability, as a people and a country, to face the reality of the pain and tragedy that war causes.

A real heckuva researcher, Lin was influenced by experiences in her youth and adolescence with the Hopewell and Adena burial mounds, near her hometown in the place that we now call Ohio. Archeologists tell lots of stories about the people who built these mounds, but there are so many unknowns that it kinda takes an artist to make sense of them. The Hopewell mounds date from the first century, and the Adena mounds are several hundred years older, and both seem to suggest that the practice of pyramid and earthwork building, as a ceremonial way of mourning and artistic practice, was not at all unique to the Egyptians or Mayans.

When she composed the Veterans Memorial, Lin says, "I basically didn't even realize I was Chinese." Growing up with academic parents and friends of European descent, Lin had no idea that anyone would ever express prejudice against her, she adds. She never expected that plain ol' green envy would take the form of bigotry. Art was art, smarts was smarts, and that was the hermetic, almost sacred mindset in which she developed as an architect and an artist. In some ways, her naïvete, as she describes it, was a sort of advantage, because it allowed her to think about things like form, transcendence, and materials without having to prepare herself for the political storm waiting like a tornado on the other side of success. Her grandfather had some enormously famous, like national hero famous, cousins, named Lin Juemin and Lin Yin Ming, who were among the seventy-two revolutionary martyrs of the Second Guangzhou Uprising, and her parents kept her in the loop, but it didn't seem connected to cushy suburban life in the U.S.

When critics said things like, "there's so much Zen in your work," she'd say, "you're reading into it too much," but when she got a little older and had children, she realized that it was important to "go back and understand the cultural underpinnings of what makes you." She had already been investigating the cultural underpinnings of the U.S., and the Hopewell and Adena mounds, in a brilliant way, influenced her decision to make the Veterans Memorial an earthwork, not just a proud, jutting tower showing valiant warriors and flags flapping in a David-inspired way. In this way, Lin is agreeing with Warhol's saying that land is the most beautiful thing you can own, slipping the V-shaped black granite form of 58,000 names, organized chronologically, into the earth, creating an unresolved tension between the artistic voices of the earth and the human, like the unresolved tension between indigenous peoples, many of whom give their lives in U.S. wars, and millions of immigrants. Another function of making the memorial an earthwork is, she says, to encourage people to cry, to look downwards in mourning, to find a collective catharsis to commemorate such unthinkable losses. 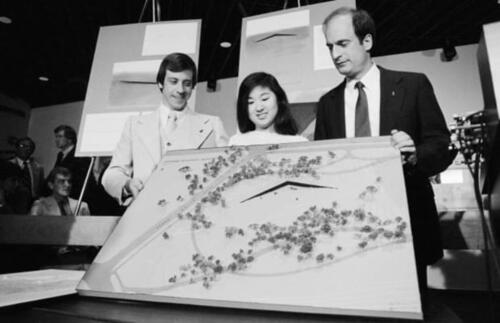 Maybe the thing that makes people upset about Lin, and gives her the mantle of a Dame Done Wrong, is her incisive way of displaying her insights in both her work and her writing, which comes out in her interviews. Aware of the constant contradictions and tensions of life, Lin says, "My work is heavily researched, but then you have to kill off that side of you to find the poetry within the thought." In a similar way, we can draw a causal connection of sorts between Lin's heritage, her childhood, the indigenous mounds, and so on, but she cuts us off at the pass by naming exactly what makes art so special: "I do not think you can find a reason for everything you make." There's a certain miraculous and unknowable quality to life which Lin names and sanctifies in her work. 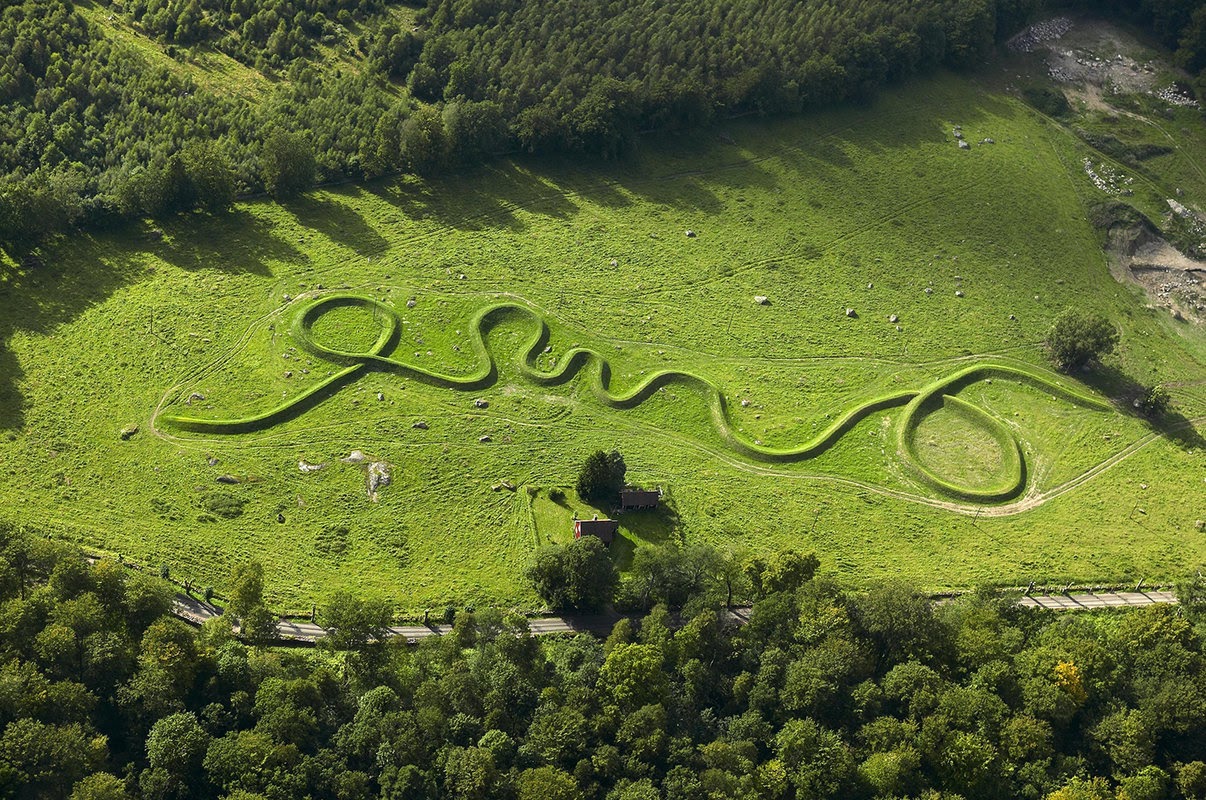 Lin has spent her entire career talking about the Veterans Memorial, so we owe it to her to give some love to her more recent work, such as Eleven Minute Line. Twelve feet high and 1600 feet long, this earthwork makes its home in a cow pasture in Sweden, and, once again, takes its cue from indigenous people, who we speculatively call the Fort Ancient people, almost a thousand years ago. These people made the Serpent Mound, which is such a striking, singular work, that when European settlers first saw it, they convinced themselves that somehow, other Europeans must have traveled there, certainly by jetpack or Star Trek teleportation, constructed the work, and gone back home, all without leaving any record of their Europeanness. This totally likely story forms part of the basis of Lin's discussion of Eleven Minute Line: the settlers imagined that the Serpent Mound was European, because it is sophisticated, so Lin did them a favor by putting a similar earthwork down across the pond. You're welcome, Sweden. 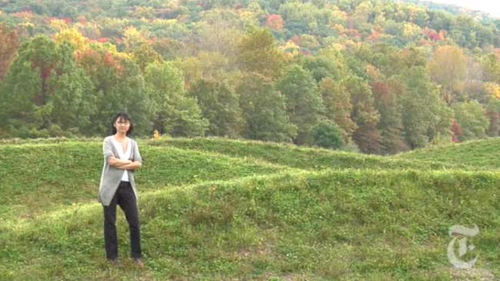 Ready for the waterworks? Put away your tissues—we're looking at Lin's trio of water-based earthworks, partly inspired by Dr. King's "I Have a Dream" speech, which features this excerpt from the Book of Amos: "We are not satisfied. We shall not be satisfied until justice—rolls down like waters and righteousness like a mighty stream." Twenty years after her first wavefield work, the emphasis on water is all the more prescient, in the wake of the hard-won legal decision in favor of the Standing Rock Sioux against the would-be builders of the Dakota Access Pipeline. The first book of Genesis talks about the Creator making the heavens and the earth, but not the waters. Why not? Apparently, it's a secret. 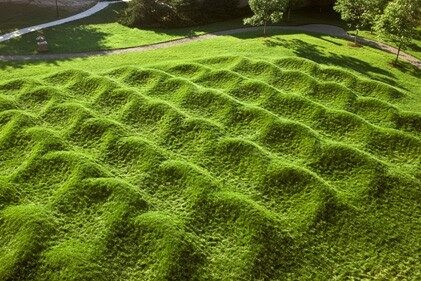 Like a mother bird feeding her chicks, Lin "regurgitates," in her words, science and mathematics into the earth, making an impression of our mathematical, Apollonian sensibilities on terra firma.

She uses the word "regurgitate" to introduce us to her process of making Storm King Wavefield, the third in the wavefield cycle, which uses nonlinear dynamics, a subfield of math, or maths, if you're British, to create fifteen to eighteen-foot high waves of earth and grass over the surface of an eleven-acre space. 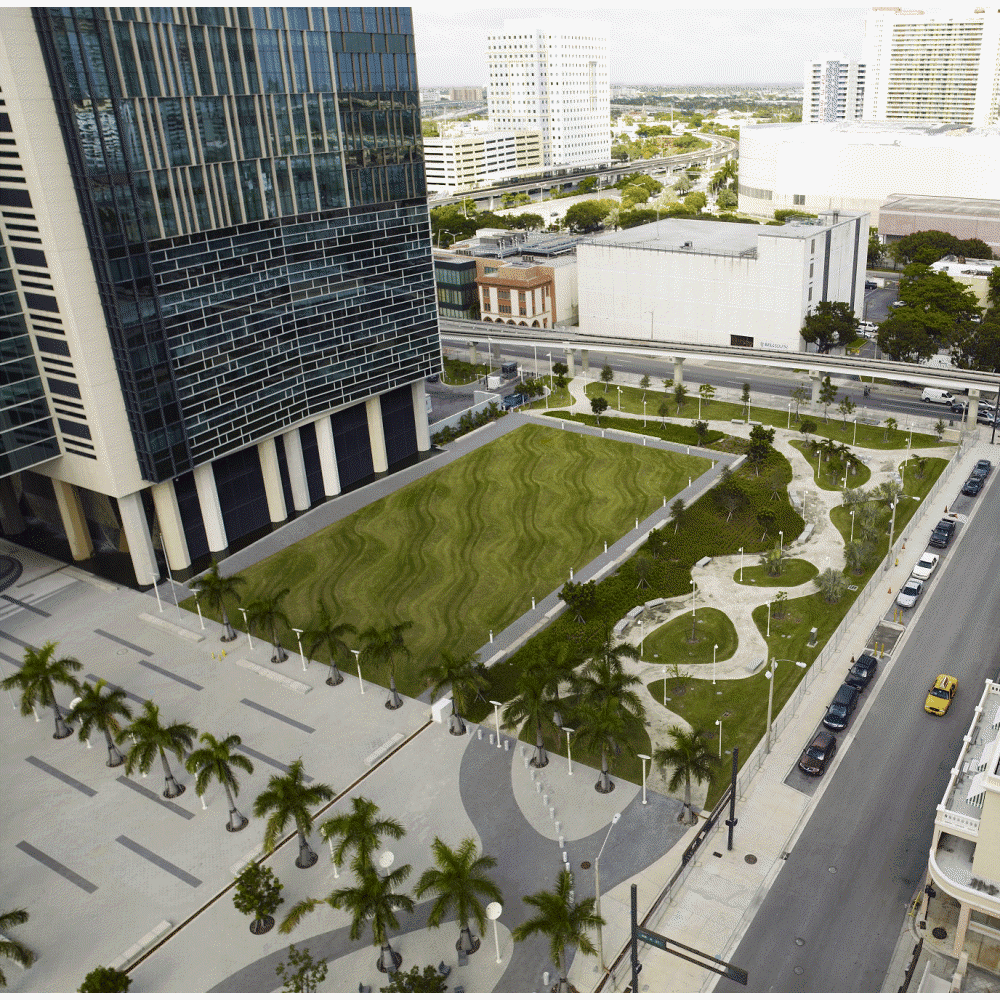 Lin's works tap into the sacredness of water, our best friend who we have to keep a close eye on. Water can be quite turbulent, and it took centuries for people to develop mathematical algorithms capable of simulating water. Still, even today, the most accurate fluid simulations, in Pixar movies and video games, for example, are far from convincing, most of the time, resembling the thick surfaces of jello or the skin on a cup of boiled milk. 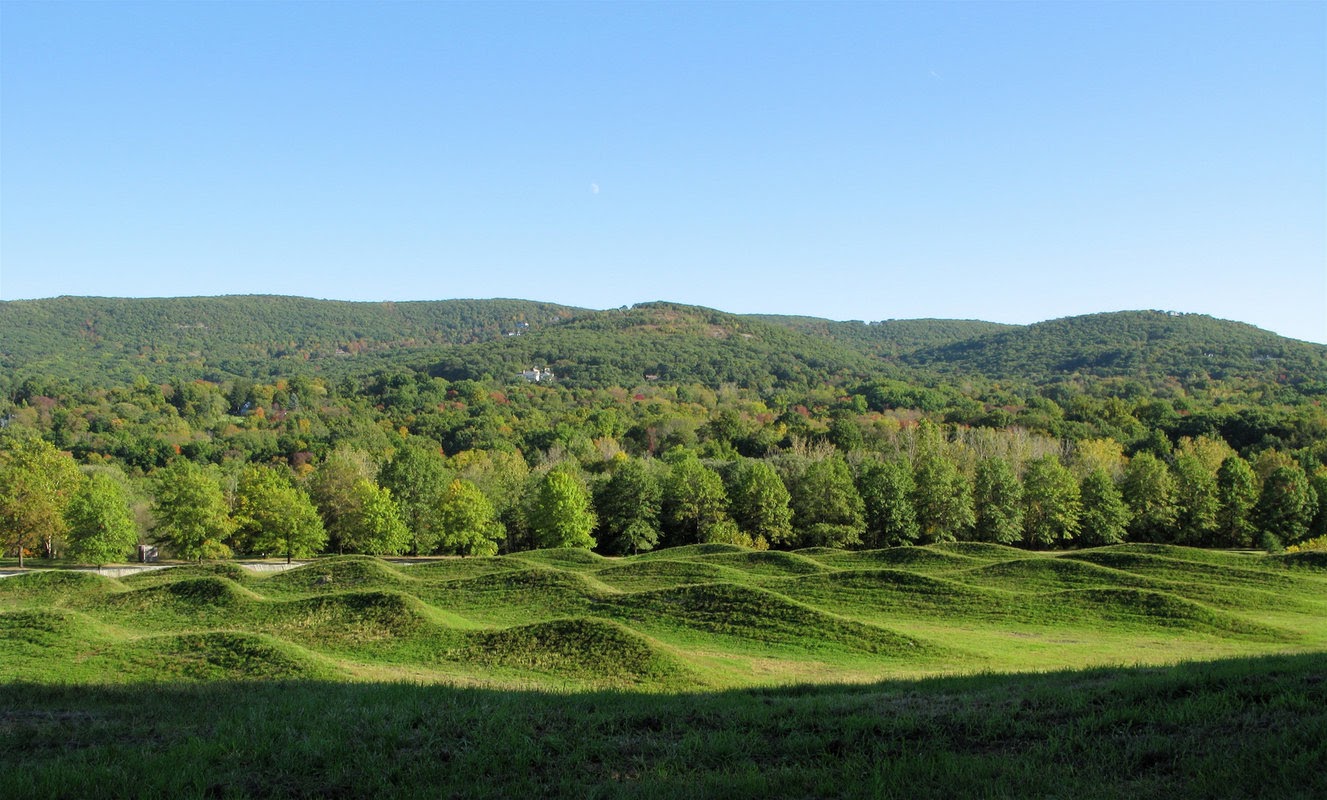 Lin's goal is not to simulate water, but to incorporate the Stokes wavefield equations, in which, for example, the flow velocity u can be described as the gradient of a velocity potential Φ, whatever that means. I'd love to know what that means, and that's the most basic introductory part of the Stokes theory, but it's very comforting to know that I don't need to understand it, and I can leave it to other people, geniuses like Lin.