Maya Lin rewrites the book with what might be the world's first interactive memorial.

What started out as a vilified project proposal turned into the most visited memorial in the country, built to commemorate the lives lost in the even more controversial Vietnam War.

People like to touch it, rub it, and leave personal objects at the base of the enormous angled wall.

Maya Lin, the daughter of Chinese immigrants, was a 21-year-old architecture student at Yale University when she entered her proposal for the Vietnam Veterans Memorial. Her design was chosen from over 1,400 applicants. She later said that she never would have won if the names had been visible on the entries.

Immediately there was an uproar in Washington and among Veterans over the proposed design, calling it “a black gash of shame.” Former presidential candidate Ross Perot called her an “egg roll” after learning of her Chinese heritage. James Watt, former Secretary of the Interior, initially refused to issue a building permit. Senator James Webb called it a “nihilistic slab of stone.”

Despite the extreme harassment, the memorial was built. It soon became something of a shrine as 4 million people per year flock to the site.

Over 58,000 names of soldiers who died or were missing in action are engraved in the highly polished stone. Almost immediately, visitors left remembrances at the foot of the wall. In fact, several thousand items are left each year. Everything from a Harley-Davidson motorcycle with the license plate “Hero,” to a full size replica of a “tiger cage” which was used for torturing prisoners. In case you are wondering what becomes of these objects, they are all collected and stored at the NPS Museum. The Smithsonian actually had a show of the collected items.

For those people who can’t make it to Washington, there is a scaled model that travels around the country called the "Moving Wall.”

Here is what Wikipedia says about Vietnam Veterans Memorial

The Vietnam Veterans Memorial is a U.S. national memorial in Washington, D.C., honoring service members of the U.S. armed forces who fought in the Vietnam War. The 2-acre (8,100 m2) site is dominated by a black granite wall engraved with the names of those service members who died as a result of their service in Vietnam and South East Asia during the war. The wall, completed in 1982, has since been supplemented with the statue The Three Soldiers and the Vietnam Women's Memorial.

The memorial is in Constitution Gardens, adjacent to the National Mall and just northeast of the Lincoln Memorial. The memorial is maintained by the National Park Service, and receives around 3 million visitors each year. The Memorial Wall was designed by American architect Maya Lin. In 2007, it was ranked tenth on the "List of America's Favorite Architecture" by the American Institute of Architects. As a national memorial, it is listed on the National Register of Historic Places.

Check out the full Wikipedia article about Vietnam Veterans Memorial

Vietnam Veterans Memorial is mentioned on our blog - 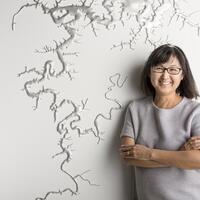