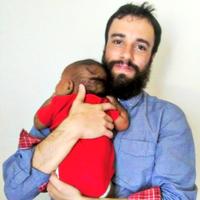 My mother's family are from Beyond the Pale in Russia, and she was a child psychologist.  My father was an indigenous politician. I was adopted at the age of seven.  I was raised as an only child without a television. I am interested in art as it relates to language, and the ways in which people create their own languages. I share a home with my wife and our child in the Northern Appalachians.

How do you like to spend your free time?

I love to read! These days I have been reading the aggadah and the mishna. And I also like TV shows.

What is your favorite city to visit?

There's no other place like New York City. Each block has so many stories.

If you could have your portrait made by any artist, whom would you choose, and why?

Michelangelo or Gentileschi, because their paintings are unique and that period of art has influenced everything after it.