Battle of the First Ladies! 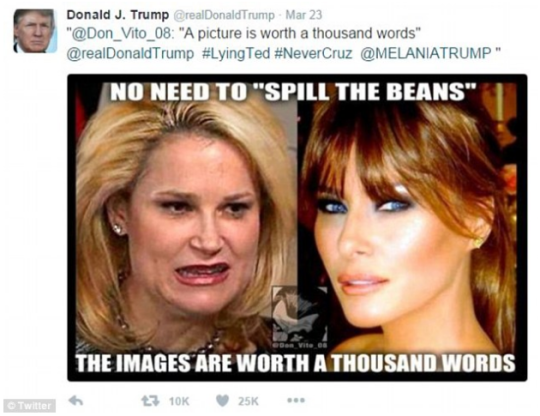 Amidst GOP debates on hand to penis size ratio (in other worlds, who has the biggest weenie), last month things took the inevitable next step to online bullying about who’s banging the hottest chick.  Team Cruz (apparently without his approval) tried to slut-shame Melania Trump with nude photos from her entirely legitimate modeling career.  Trump responded in kind by retweeting a heavily retouched photo comparison between Melania and Heidi Cruz, the latest locker room zip-off as the race for Homecoming King (oops, I mean President of the United States) becomes increasingly absurd, culminating in Ted Cruz’s stunning withdrawal last night.  Meanwhile,  applications for Canadian visas are at a record high as Trump is declared the presumptive nominee.

Why two enormously successful women must be validated solely in terms of appearance remains a mystery, but since Trump insists on playing that game, if Melania’s face in the above image were stretched any tighter her scalp would have a muffin-top, and I could get a contact high from the airbrushing. 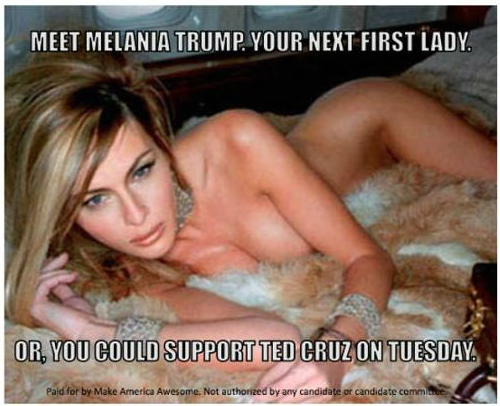 Here’s what all the fuss is about.  This supposedly shocking revelation was part of a professional modeling shoot for GQ, and was already public knowledge.

This comes as the ultimate First Lady, Secretary of State Hillary Clinton, wages her ongoing battle against Fox News on one front, and millennial Facebook memes on the other.  While the internet has certainly turned up the octane on public relations warfare, high-profile feuds are nothing new amongst powerful women, or women in the lives of powerful men. 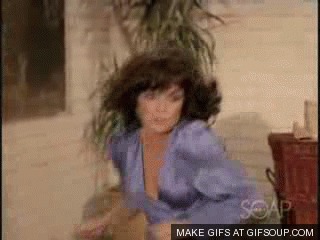 My interpretation of Hillary vs. social media

“Behind every great man is a great woman,” so goes the condescending proverb, all too true in an America where the highest social position a woman can achieve has historically been as the lady on the arm of the guy in charge.  In honor of election season, Sartle takes a look at First Ladies and their public and private quarrels, as captured in works of art.

1. Varina Howell Davis vs. The Confederacy 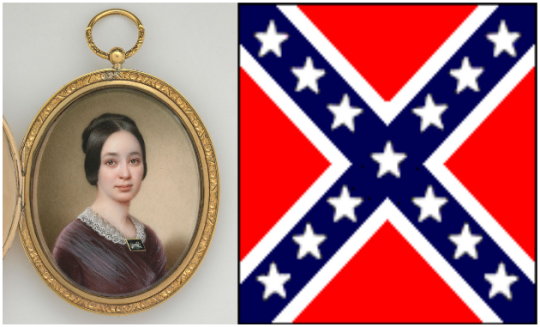 Varina Howell Davis was First Lady of the Confederacy, as well as its most unlikely critic.  Though married to Confederate President Jefferson Davis, she openly questioned her husband’s competency to govern, thought the Confederacy foolhardy and ill-equipped, and even dared to suggest that “maybe women were not the inferior sex; and that perhaps it was a mistake to deny women the suffrage before the war.”  Because of her dark coloring, her enemies accused her of looking like “a mulatto or an Indian ‘squaw.”  She sardonically called herself a  “half-breed” because she had family ties to both the North and South. 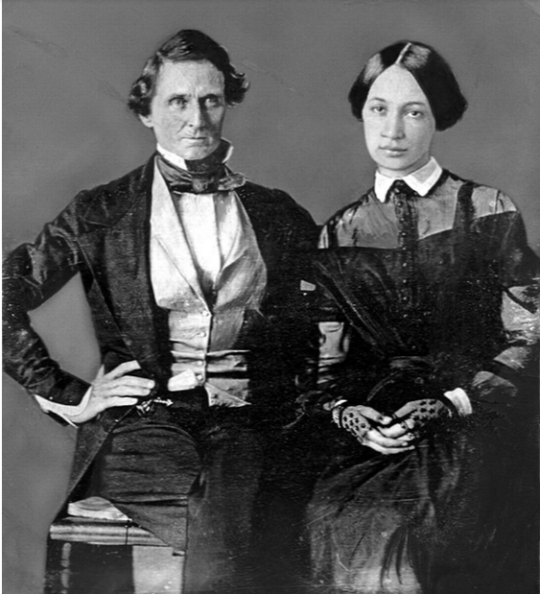 This wedding photograph of Jefferson and Varina Davis shows that she was a. Kind of a hottie, and b. Had what some described as “mulatto or Indian” features.

And the winner is…Varina!  As rose-tinting of the Confederacy wanes, it’s time to reevaluate this misunderstood, protofeminist rebel against the “Rebel Cause.” 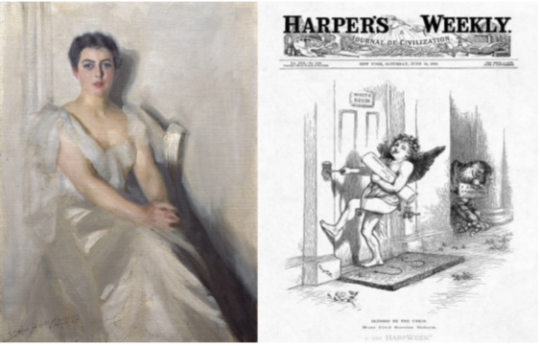 Portrait of Mrs. Grover Cleveland by Anders Zorn, in the Isabella Stewart Gardner Museum (left). Satirical cartoon about her marriage to Cleveland showing Cupid coming to the White House (right).

Frances “Frankie” Folsom married President Grover Cleveland when she was 21 and he was 48, making her the youngest ever First Lady and the only to marry inside the White House.  She was America’s sweetheart, and the masses were hysterical with White House wedding fever, but being the 21-year-old trophy wife of a middle-aged president wasn’t all fun and games.  The press claimed she was having an affair when she appeared at the theatre with another man, and she was criticized for her low-cut, off the shoulders gowns.  She was put in the humiliating position of publicly denying the adultery rumors, the first President’s wife to be so degraded. 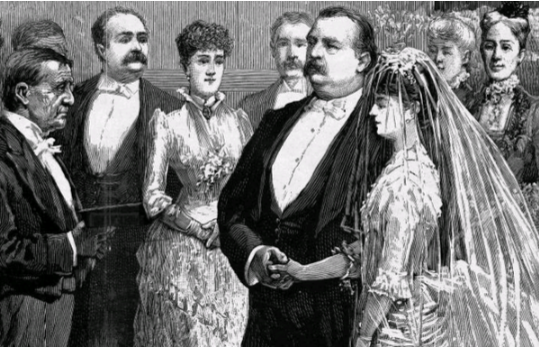 And the winner is…Frankie!  Frankie just DNGAF about what the newspapers said.  Also, we love her in Hawaii because she and Grover opposed the overthrow of Queen Liliuokalani.

Marilyn Monroe and Jackie Kennedy Onassis are America’s two great beauty icons: the blonde bombshell, and the sophisticated, cool brunette…the Betty and Veronica of White House intrigue.  President John F. Kennedy squeezed bedding countless women in between running the country (or did he squeeze running the country in between bedding countless women).  Though she privately tolerated and publicly remained discreet about his affairs, Jackie was deeply wounded by his habitual adultery.  Marilyn Monroe famously sang “Happy Birthday Mr. President” to JFK in an illusion nude gown, and reportedly spent a week banging him at Bing Crosby’s house.  The White House phone log proves Marilyn even called him at home.  Good thing First Ladies have other people to answer the phone for them, cause that would’ve been hellz of awkward.

And the winner is…a tie!  Marilyn had a short and tragic life, but being the biggest movie star of all time has staying power.  Jackie had a successful (and highly profitable) second marriage to Greek millionaire Aristotle Onassis, and remains an international style icon. 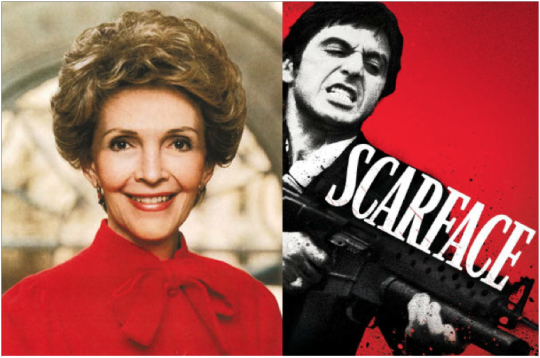 As our Nation still mourns Nancy Reagan, let’s take a minute to think about her many admirable qualities.  (moment of silence).  Now that that’s over, the gloves come off.  Anyone who grew up in or around the ‘80s knows the phrase “Just Say No,”  battle cry of Nancy’s well-intentioned by systemically flawed crusade against drugs.  Keith Haring’s Crack is Wack captured the horrors of the 1980s drug epidemic in a straightforward way that spoke to the people affected by it.  The Reagan-sponsored War on Drugs preferred to throw them in prison, resulting in the mass incarceration of nonviolent offenders.  Plus, the Reagans’ willful ignorance of the AIDS crisis also doesn’t earn them any fans in the, you know, anti-death community.  On the other hand, Nancy looked great in red, the universal color of AIDS….yeeeeaaaaah, doesn’t really make up for it. 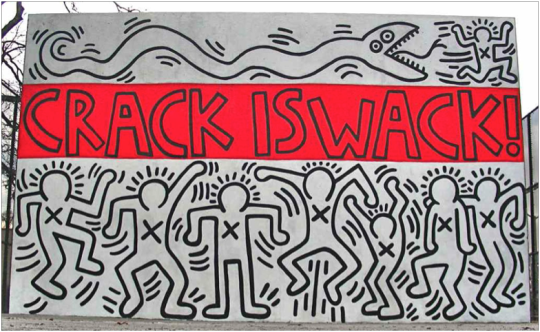 And the winner is….Drugs.  It turns out punishing people for their addictions doesn’t cure them.  Who’d of thought?

So, as America’s favorite soap opera, Election 2016 continues, if the episode where the characters viciously attack each other’s wives seems familiar, it’s because we’ve seen it many times before.  And as Abigail Adams once wrote to John Adams, “remember the ladies.”

(she was writing about women’s suffrage and he totally did not remember the ladies, btw)  Hopefully, as Trump’s sexist vitriol threatens to dominate not only the media, but the American/world stage, we can all follow the shining example of Marge Simpson and Barbara Bush and learn to get along. 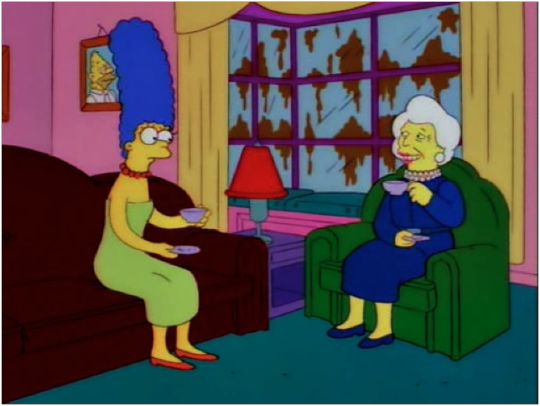