Who Wore it Better? Game of Thrones vs Art History

The games have nearly begun. And I'm not talking about the Hunger Games, nor those reruns of Family Feud that I watch in the afternoons. This time, it's all about the bleak, pseudo-medieval, sex and violence laden drama that none of us knew we wanted but are so glad to have. Yes, Game of Thrones is upon us with its seventh season, a presence that will swiftly bring our summer festivities to a halt, as winter casts its dark shadow upon us yet again. As GOT superfans (and probably also everyone else in the world) knows, this will be the second to last cycle of a series that has introduced us to some of our most important and revered life lessons—like that it’s never a bad time to drink wine.

If you haven’t seen season six yet because you’re either a) living under a rock or b) waiting for the whole thing to be over so that you can binge watch it in peace once all the hype has worn off, I encourage you to get a move on because the next two seasons promise more  drama, dragons, boobs, and mean muggin’ Cersei than we've ever seen before.

Recently, the cast underwent a She's All That worthy makeover, revamping their wardrobe with bold new looks for a promotional photoshoot conducted by fashion photographer and camera magician Miles Aldridge for Time Magazine. Contrary to the muted grey, black and brown hues they’re usually outfitted in (think Yeezy Season 4) this appearance debuted a new aesthetic: vibrant pop-art flair with a touch of renaissance extravagance that may seem incongruous with garb that usually befits life in the Seven Kingdoms (hint: it’s not high fashion, though they always look fierce).

But wait—is it just us or is there a serious case of déjà vu going on here? Some of our favorite Renaissance beauties have been spotted in photoshoots of their own exhibiting some eerily similar ensembles. Now, if Northern Renaissance portraits were anything other than bold, vibrant and hyper extravagant, I’ll need to close my computer right now, leave Westeros, spend years in the forest, and find the direwolf that's going to lead me to salvation because, in my eyes, they gave new meaning to the term “glamor shot.” 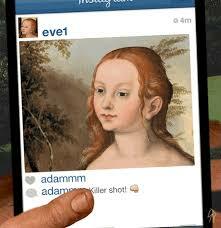 Northern Renaissance portraiture is extremely detailed, with a focus on the attributes of the (usually wealthy) person being portrayed. They commit to highlighting various features, particularly the hands, and it's not unusual to see the sitters either grasping something or resting their hands on a ledge in the foreground. The artist would strive to capture the essence of whomever they were representing, a persona concocted in a collaboration between the artist and the sitter. Miles Aldridge sought to encapsulate the theatricality, detail, and slight awkwardness of the era, adopting these qualities in more ways than one.

Now for the ultimate question: is imitation the best form of flattery, or have the original purveyors of wealth and excess come to reclaim their spots as #1 fashion icons? Let's take a look at some of the most striking resemblances to determine at last who wore it better. 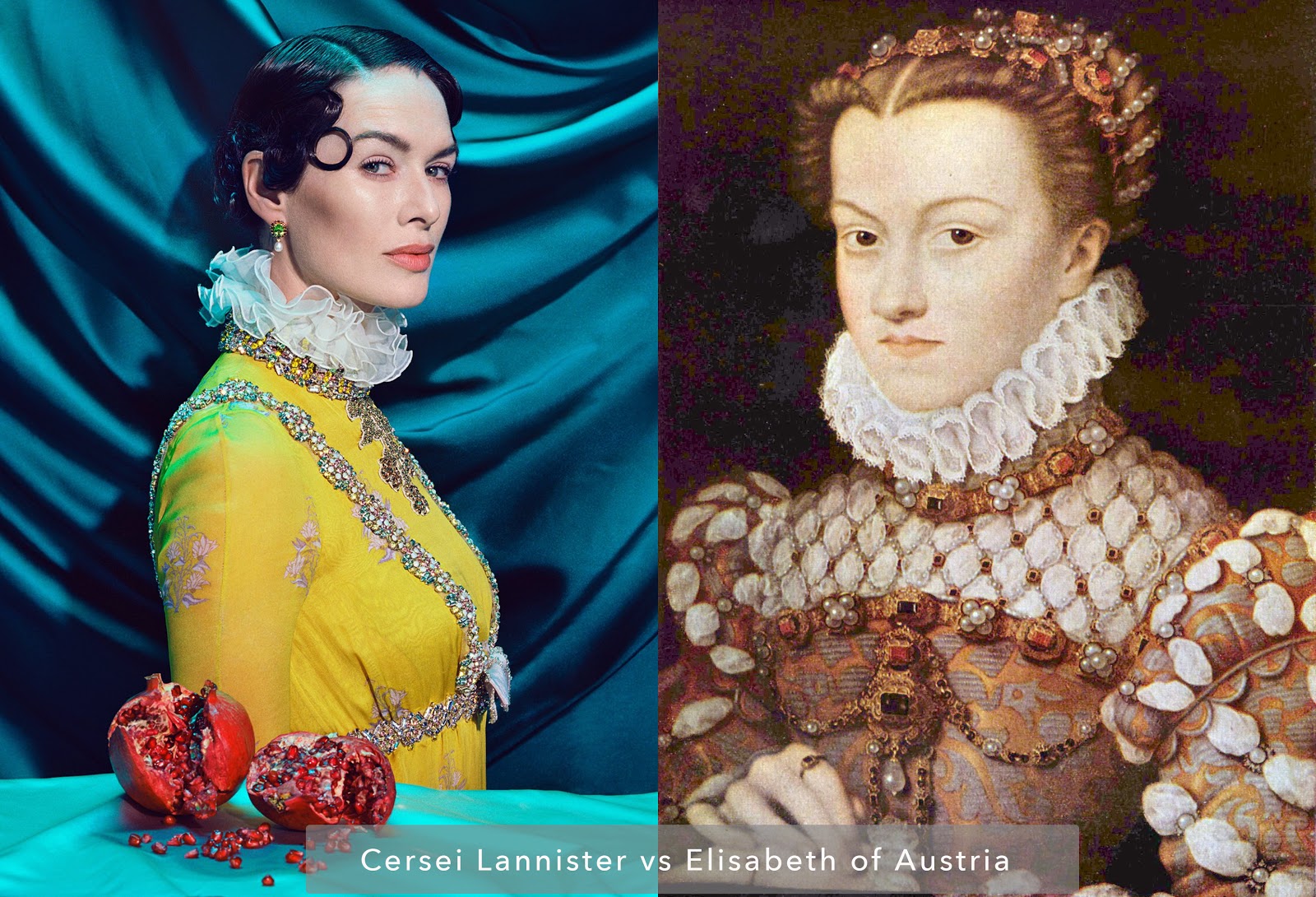 Elisabeth of Austria, Queen of France by François Clouet at the Louvre Museum

Meet Elisabeth of Austria. As Queen of France, she needed to project a certain image to the public, but in reality, she didn't feel at home amidst her court or in her loveless (but mutually respectful) marriage. She was married off to Charles IX of France, a descendent of the Medici moguls of Italy, but was largely excluded from public affairs, giving her more time to do what she loved: reading, learning languages, embroidering, caring for the poor, and spending time alone.

These doppelgängers both sport a stone cold gaze to rival Medusa herself. That dead-on, one eyebrow raised stare gives off a casual, just threw it on, “come any closer and I’ll behead you” vibe, and they’re pulling it off flawlessly. To accompany their runway ready faces, both Cersei and Elisabeth have donned an elegant, bedazzled ball gown that is sure to have the two queens dancing the night away in style. The ruffled collar conveniently hides undesired chin flab, while cascading jewels and embellishments convey the prestige of their high ranking positions.

We're calling this fashion face-off for Elisabeth. The whole "pomegranate as symbol of fertility" thing went out of style last summer, and we’re sensing an air of desperation here. There are definitely some things that Cersei can do to amp up her look. Not on the list? Her brother. No need to pose next to fruits when you gave birth in the Louvre Palace. 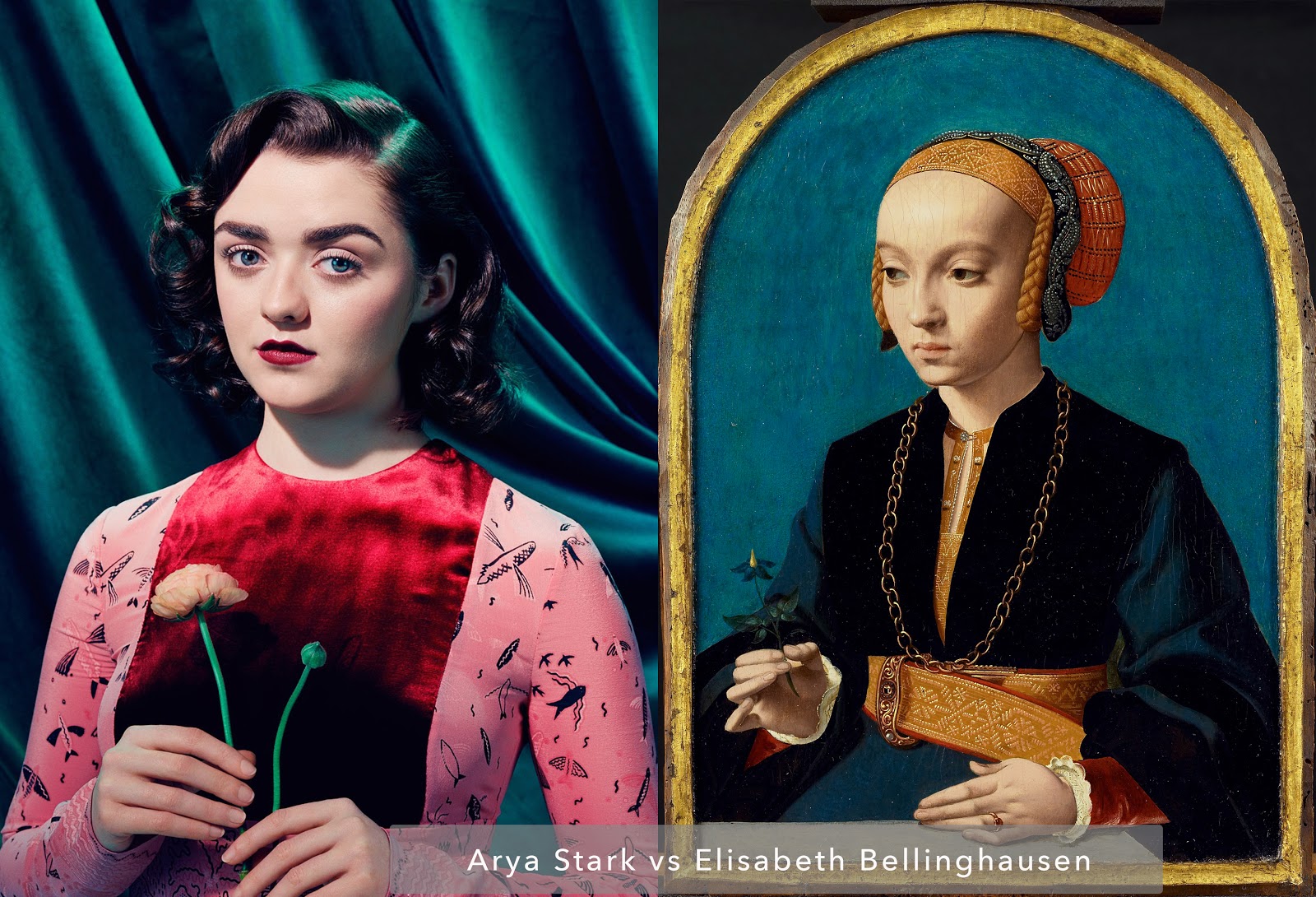 Portrait of a Young Woman by Bartholomaüs Bruyn at the Mauritshius

The second showdown comes from Arya Stark and Elisabeth Bellinghausen, who were both recently seen posing in similar modest "garden to night" ensembles and matching botanical accessories. The soft features of both women allow them to pull off this simple look beautifully, while the budding blossoms perfectly complement their outfits.

Elisabeth opted for a demure hue for the portrait celebrating her engagement, but she still looks positively radiant. She was meant to be pictured here with her soon-to-be beau, but he was cut out somehow. Maybe it's because he turned out to be a dud, losing most of their money in his business ventures that left them in continual financial difficulties. Sigh, men.

In the end, the #1 spot here has to be our girl Arya for her red and pink dress that perfectly contrasts with the dramatic teal curtain, while complementing her confident expression and flower. After all, bouquets can't truly bloom unless you've got the confidence to rock them. 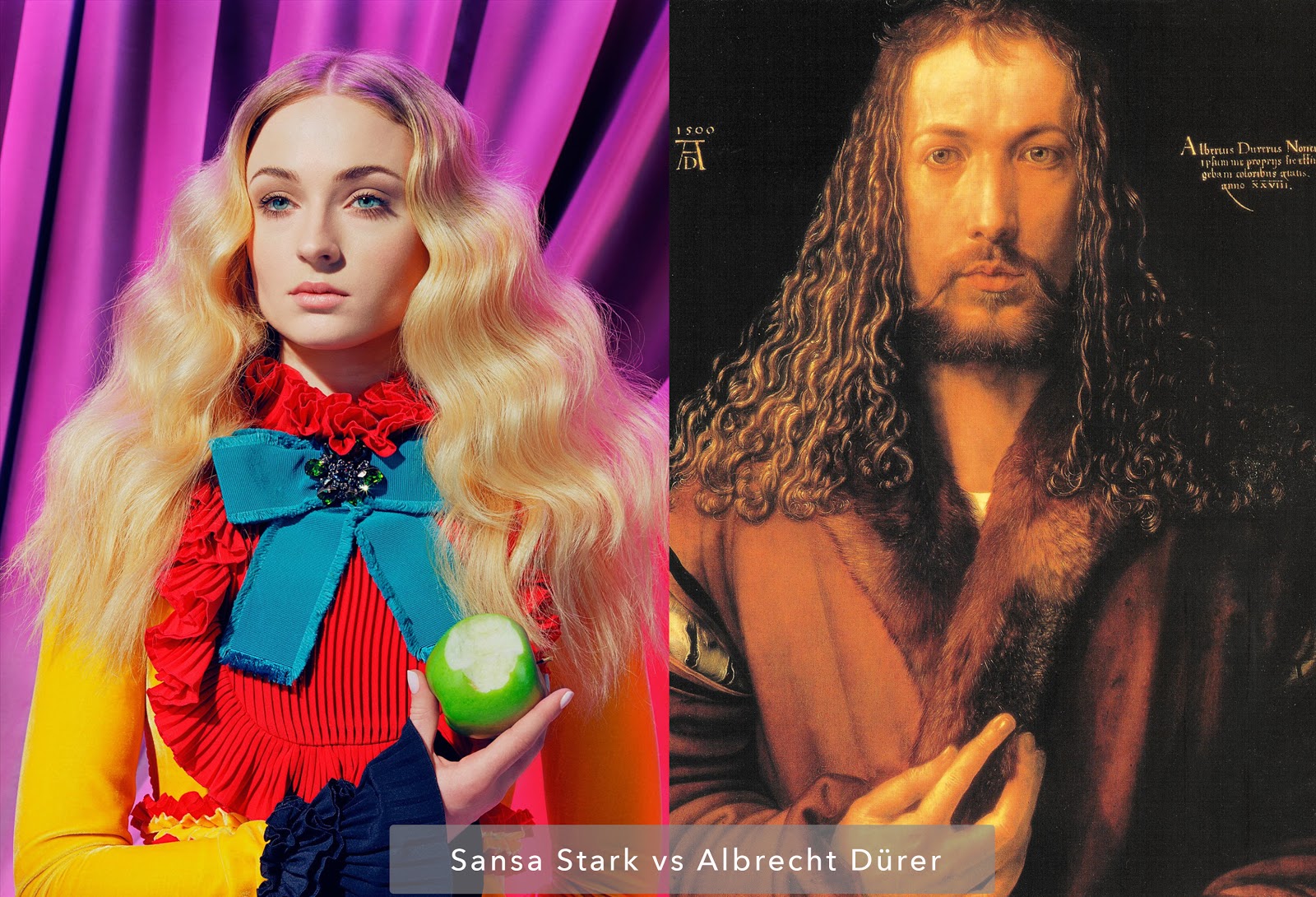 Self-Portrait by Albrecht Dürer at the Alte Pinakothek

Now here's a resemblance that's truly uncanny. Sansa Stark must have recently went to the same hairdresser as Albrecht Dürer because they were seen sporting an unmistakably similar "lions mane" perm, which has been Dürer's signature look for some time now. She seems to have been inspired by him for this pose in her photoshoot, drawing attention to her right hand and utilizing the same intense expression that rivals but doesn't surpass Dürer's rendition of "blue steel."

We're calling this one for the infamous diva on the right, who pulls off this "just rolled out of bed" look, while maintaining an effortless subtlety for the last of three meticulously composed self-portraits that he flaunted around town to show everyone how hip he was. The word on the street is that Dürer was basically famous, super talented, and a style icon (and he knew it). We're with him one-hundred percent. Let's just all forget that part about cavorting with Nazis once or twice in his life...

The neutrality of his color scheme heightens the drama of a look so enviable that it's been stolen and copied numerous times. Haters step aside—Dürer's divine presence rocks it better than anyone else. 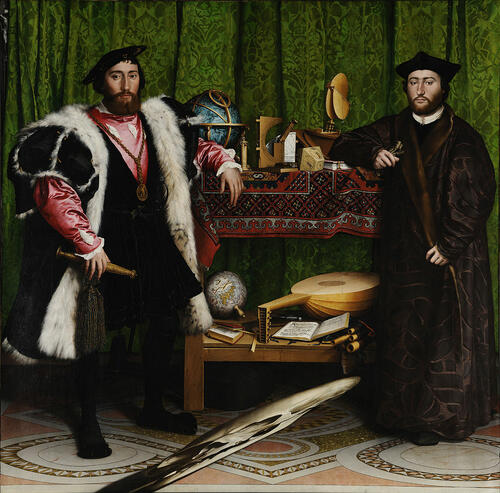 The Ambassadors by Hans Holbein the Younger at the National Gallery London Last up, we have Jon Snow who exchanged the drab fur and armor of a wall-dweller for a sleek blue and white suit fit for a night on the town. His counterpart, Georges de Selve, sports equally snazzy dress for his post as bishopelect. These two have near-identical body posture and facial-hair that would give Dalì a run for his money. As an intelligent ambassador to some high-rollers of the day, de Selve displays a cool confidence. Jon Snow does the same. Because he's Jon Snow. They're both doing a great job here, but it has to go to our boy Snow. Always. Everyday. Everywhere. I'm not sure if it's the electric blue suit or the "come hither" look in his eyes (or everything about him), but my knees are verifiably weak as I'm writing this. Of course we can't forget to mention the pièce de résistance: 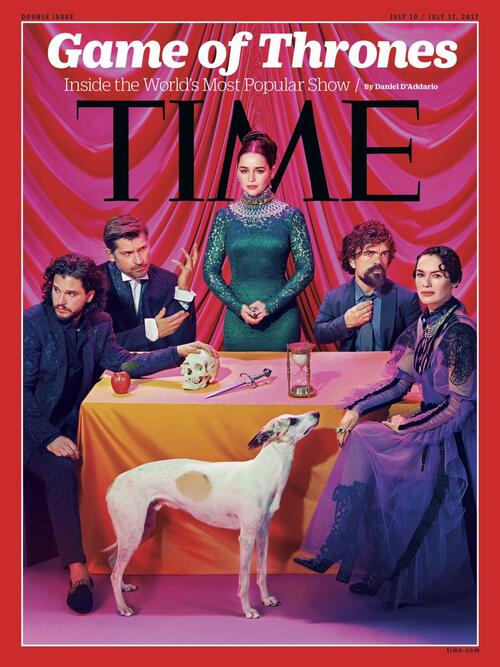 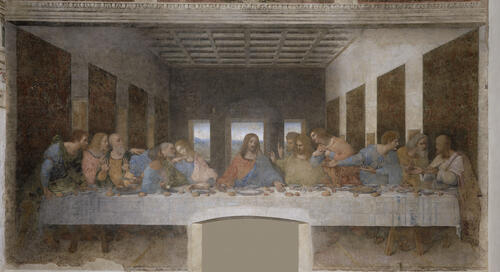 The Last Supper by Leonardo da Vinci in Holy Mary of Grace Church This is just getting blatant now. We'd recognize that tableau anywhere. And who doesn't love some Vanitas to remind us of futility of pleasure and inevitability of death? I know Game of Thrones does. They definitely love some death, symbolically of course (what does it mean that Jon Snow is holding the skull?!).

Vanitas by Bartholomaüs Bruyn at the Kröller Müller Museum

Well, that wraps up our list. Don't miss your opportunity to combat the frantic dread of cocktail party small-talk with anecdotal quips about your your favorite fictional fantasy land that are simultaneously robust and relevant, humorous and historical. You'll be the talk of the town in no time. I hope you're GOT thrones viewing parties are rich with meat pies and that the wine flows as freely as the inevitable bloodshed.