More about Casting the Net

Suzanne Valadon “seized what she wanted from art and life, and tore it free with both hands making it irrevocable her own” and Casting of the Net is a prime example of just that.

Valadon was one of the only women at the time to paint female and male nudes and probably the only woman to be using her lover, who was 21 years younger and her son’s best friend, as a model. What Valadon “tore free with both hands” in this painting is the clothes of these men.

Through its depiction of three beautifully sculpted men at work, this painting flipped the established male gaze on its head. Its incredibly provocative sex appeal was revolutionary in the art world. It was natural for a woman to be shown full frontal in her birthday suit but it might as well have been blasphemous for a man to be shown in the same manner. Viewers can see these men’s bodies from every angle and gawk as much as they want.

The artwork measures an impressive 6 1\2 by 9 feet, making these men anything but subtle. Valadon was making a statement with the contents as well as the size of the piece. She desensitized us by putting giant naked butts as up in our grill as possible. Male nudity may have been taboo in 1914, but based on the Magic Mike movies, Valadon’s work here is done.

Here is what Wikipedia says about Casting the Net

Casting the Net is an oil on canvas painting by French artist Suzanne Valadon, executed in 1914. It has the dimensions of 201 by 301 cm. It is held in the collection of the Museum of Fine Arts in Nancy.

Check out the full Wikipedia article about Casting the Net

Casting the Net is mentioned on our blog - 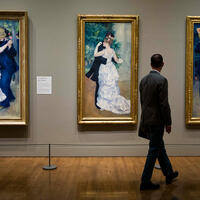 Renoir's Dancer: The Secret Life of Suzanne Valadon
"Other artists showed what viewers wanted to see. Suzanne showed them what was true.” -Renoir’s…

Who Wore it Better? Game of Thrones vs Art History
The games have nearly begun. And I'm not talking about the Hunger Games, nor those reruns of Family…
Sign up
Forgot Password
Reset Password