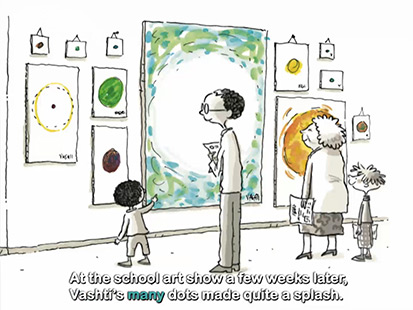 In Peter H. Reynolds’s children’s book The Dot, a young child named Vashti finds inspiration and creativity in the seemingly-simple shape of the dot. Nice try, Vashti, but you were definitely not the first “artist” to have this idea.

To celebrate International Dot Day and the love of art-making that Peter H. Reynolds has inspired with his book, let’s take a look at some real artists who realized that dots could be a catalyst for creativity. 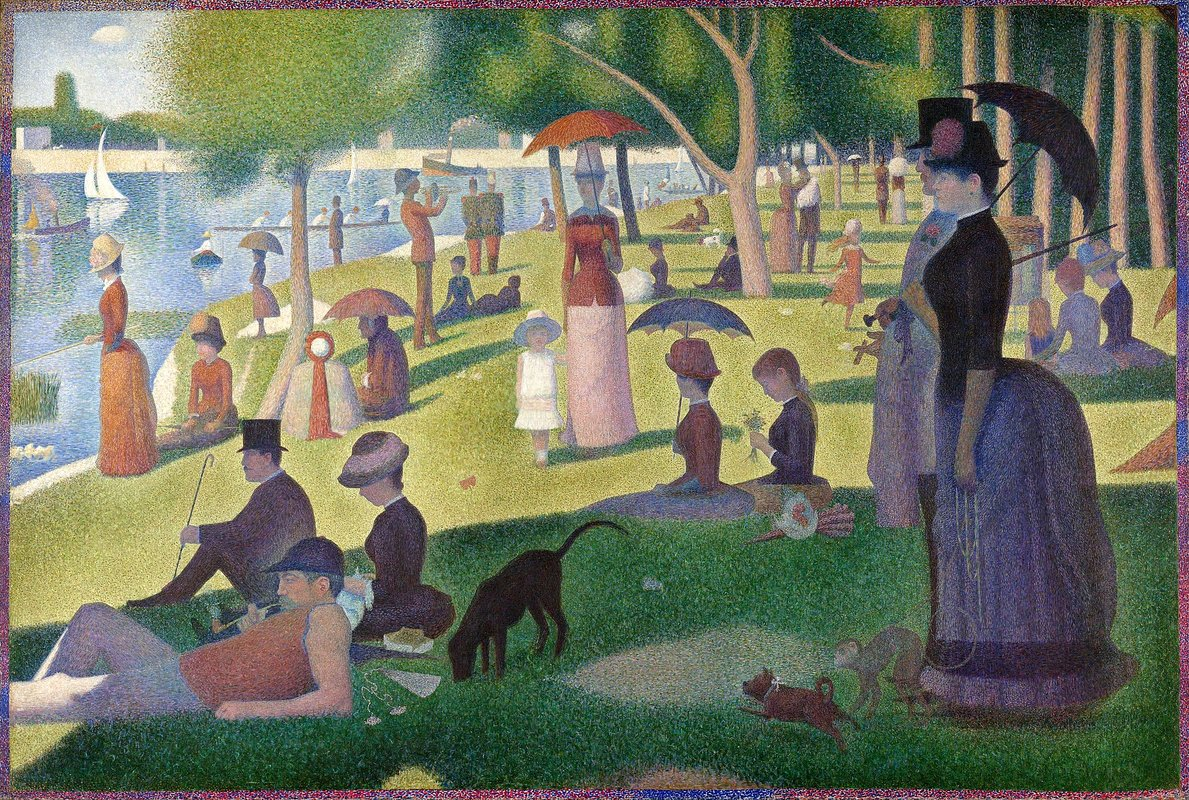 After the Impressionists made their brushy marks on all of art history, Seurat was one guy who was just not that into it. Sure, he liked the idea of color, but he didn’t jive with all that improvisation. Seurat was a systematic kind of guy, and he was interested in the scientific perception of color – specifically, how different colors look when placed next to one another. This evolved into his laborious work of placing dots of pure color next to one another and letting the viewer’s eyes do the mixing for him.

Studies for the final piece show how Seurat worked through this slightly-crazy process. He figured that small patches of color just would not do. And so, Seurat deemed the dot the most efficient way to apply small portions of paint to a huge canvas. Seurat was so committed to the cause that, in 1889, he took down what he thought was his “final product” to restretch the canvas and add to it. He added a border of red, orange, and blue dots, and the colors of the dots in the border change based on what color is next to that part of the border. Obsessive, much? 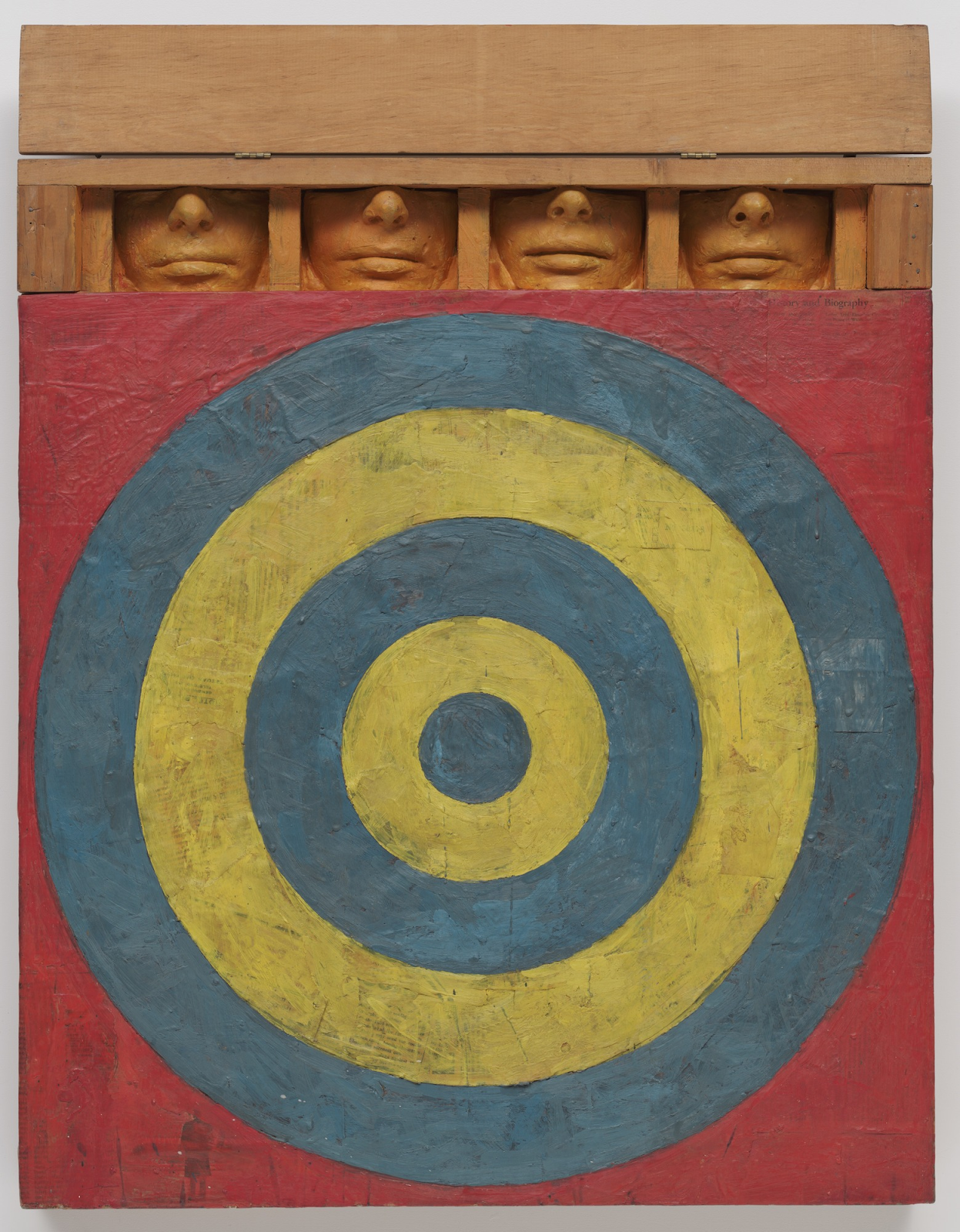 The dot may have taken a bit of a snooze between the late nineteenth-century and the mid twentieth-century, but it came back full force with Jasper Johns, who wanted to ensure that society would no longer have to suffer the self-conscious, emotional drivel of Abstract Expressionism. Now, what’s the most famous symbol that you get when you layer dots of increasing sizes and varying colors on top of one another? The target, of course.

No, not that target! Well, actually, it sort of is. Even before the department-store manifestation of heaven-on-earth staked its claim in public consciousness, Jasper Johns realized the power of working with extremely well-known symbols, like flags and targets. Ubiquitous symbols that are instantly understood give people an entry point to otherwise highfalutin fine art, while simultaneously making them second-guess what they thought they already recognized and knew. This bold foray into everyday life inspired later Pop artists like Andy Warhol. Who knew that dots could be so powerful? 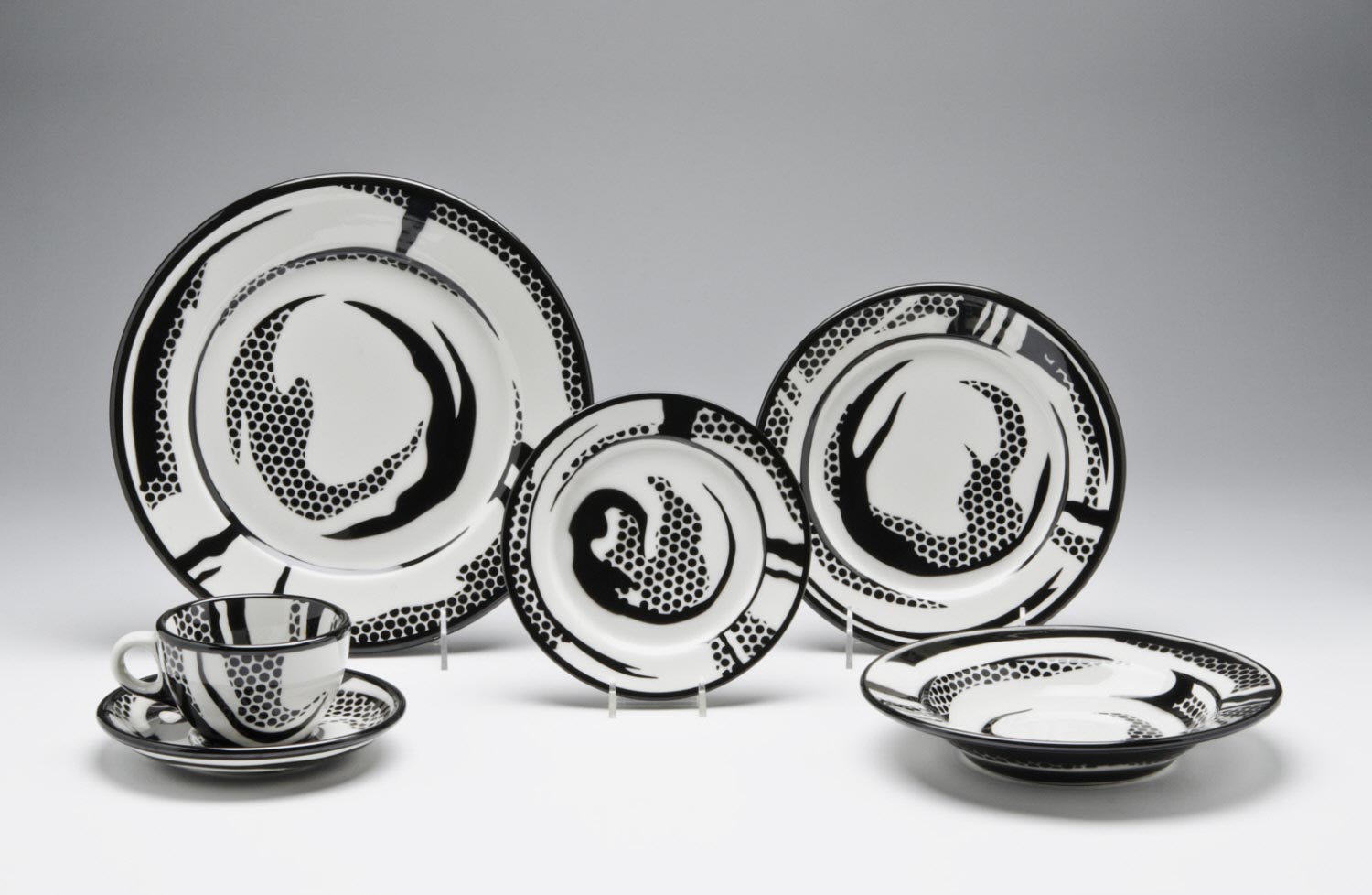 Like Seurat, Lichtenstein developed a very technical approach to art, but rather than centering himself on something serious like science, Lichtenstein chose the system of Ben-Day Dots, or how color is added to comic books. Lichtenstein was instantly successful, which let him play around with how and where he put his infamous dots, such as on this fabulous ceramic dinnerware set. A set like this could run you upwards of $5,000 at auction, so I guess it would be a better idea to put it on your wedding registry rather than buy it for yourself. 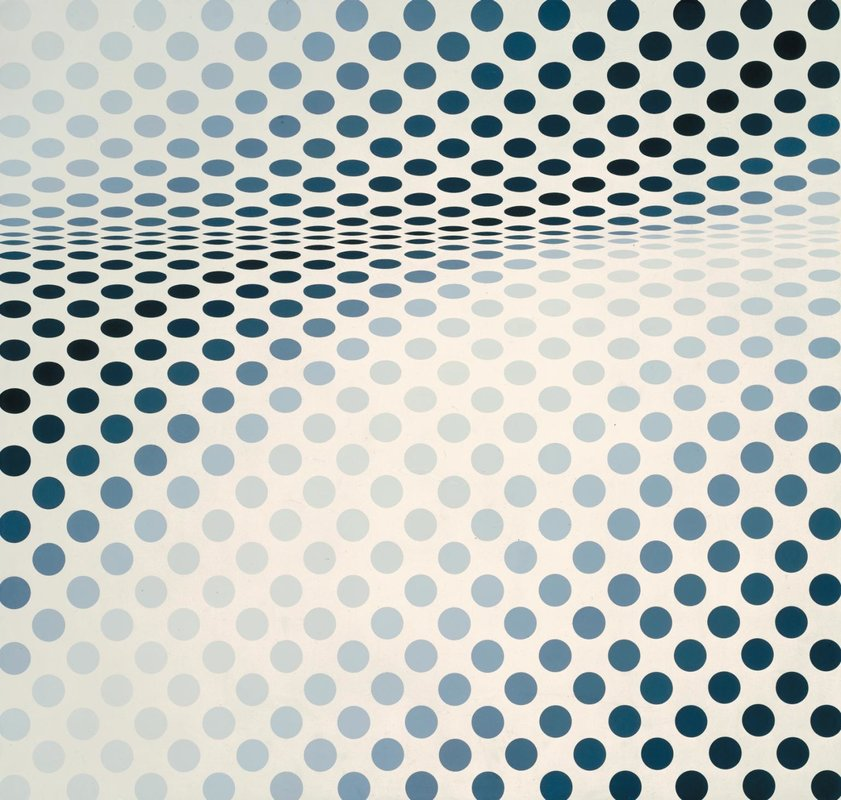 If you’d rather feel like you’re tripping rather than like you’re living inside a comic book, I highly suggest the work of Bridget Riley. Op art was a pretty crazy movement that explored just how close an artist could get you to feeling like you’re on acid, and Riley was its queen.

She specialized in illusionistic works of art that made the canvas seem as though it were alive and undulating in front of you on the wall. Riley started out with a strictly black-and-white palette and then got really wild with it when she introduced the full range of the color grey. This addition allowed her to explore tonal effects in her work, which she added to the effects of differently-shaped dots, ranging from perfect circles to ovals.

Unfortunately, when Riley started becoming popular and noticed, critics felt the need to liken her work to textiles, which established her work as more “feminine” than her male contemporaries. Riley knew that this comparison with fashion would be detrimental to her work and cause others to take her art less seriously getting shoved into a corner gallery. 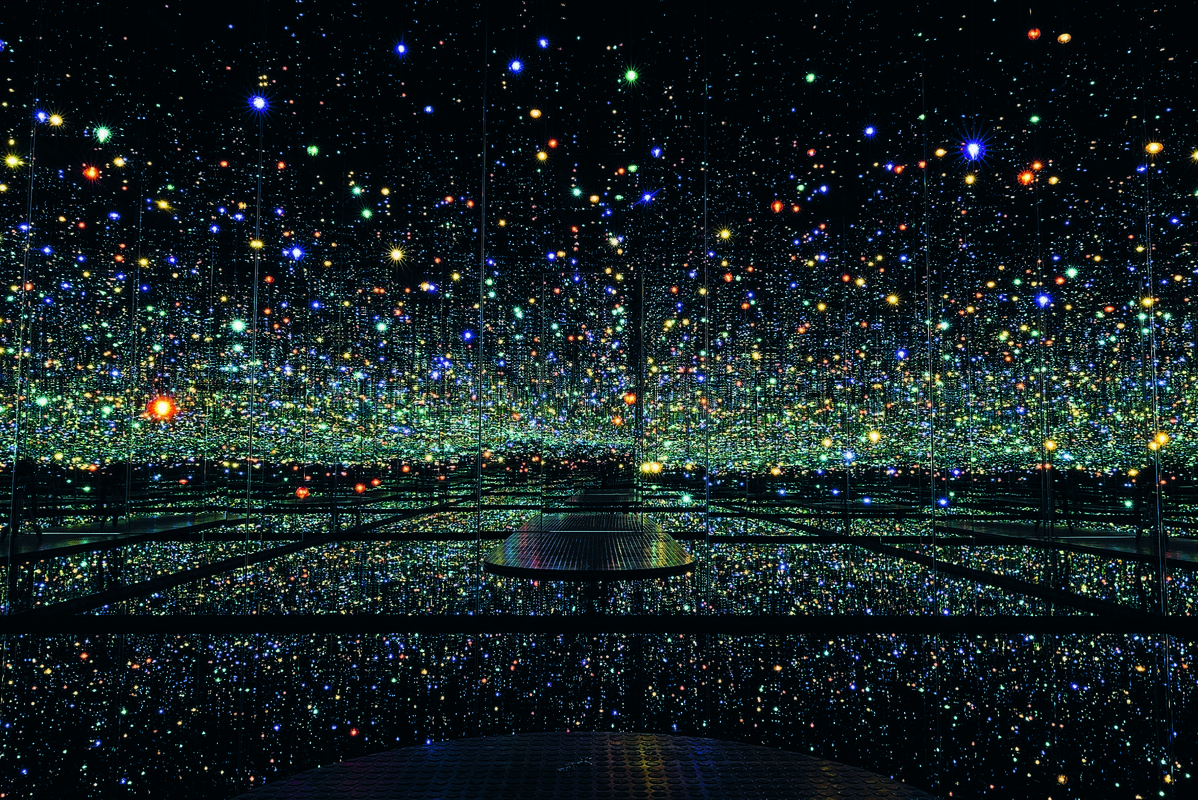 Infinity Mirrored Room by Yayoi Kusama at The Broad

Yayoi Kusama, on the other hand, was one gal who would not allow herself to be relegated to a corner of a room. Rather, she felt that it was absolutely necessary to take up an entire room and transform it into the visual equivalent of infinity itself.

In 1968, Kusama crowned herself “The High Priestess of Polka Dots” and is arguably the most famous artist using the dot today. Her unique artistic style flourished from her involvement in the Happenings of the 1950s, very hippy-dippy, performance-based stagings of art. She had an interest in the cross between everyday objects and art, so it only makes sense that her polka dot obsession crossed over into real life. She began placing dots on the naked bodies of both others and herself, calling these acts Self-Obliterations. As her popularity has rocketed in the past decade, she’s been able to create the mind-bending Infinity Rooms that people stand in line for hours just to spend a minute experiencing what infinity might look and feel like.

Which artist are you most thankful for on this year’s International Dot Day?