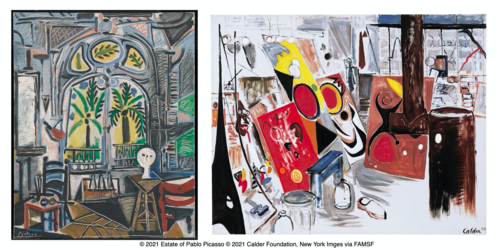 As we approach the one-year anniversary of COVID lockdown in San Francisco, things are starting to look up. As more people get vaccinated, the rate of infections goes down and thus re-opening can begin, albeit at 25% capacity. I certainly can't think of a better way to celebrate and mourn than with a contemplative walk through a museum. The de Young Museum reopened to the public Saturday, March 6 with the debut of Calder-Picasso. Originally curated in partnership with the grandsons of Alexander Calder and Pablo Picasso, the show is up through May 23rd, and with limited daily capacity, timed-tickets are required.

(Installation view of Calder-Picasso) at the de Young Museum, photography by Gary Sexton. Image via FAMSF.)

Arranged thematically, the exhibition draws parallels between these two titans of art. Where you see one wire sculpture by Calder, Picasso's painting of a similar theme is juxtaposed allowing the visitor to draw comparisons. Though the two artists only had four documented encounters the inspiration and influence that seemed to flow between them is endless. 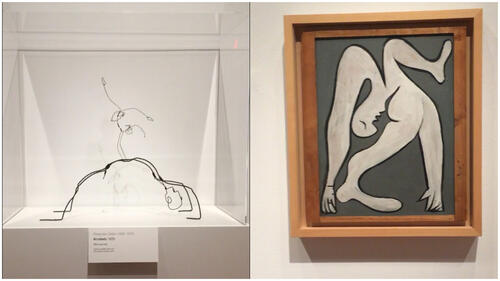 I was thoroughly disappointed in the lack of a breeze while standing in front of Calder's Aztec Josephine Baker. It's a work that is meant to move and deserves its own Beyoncé-style wind machine as befits the queen of cabaret. 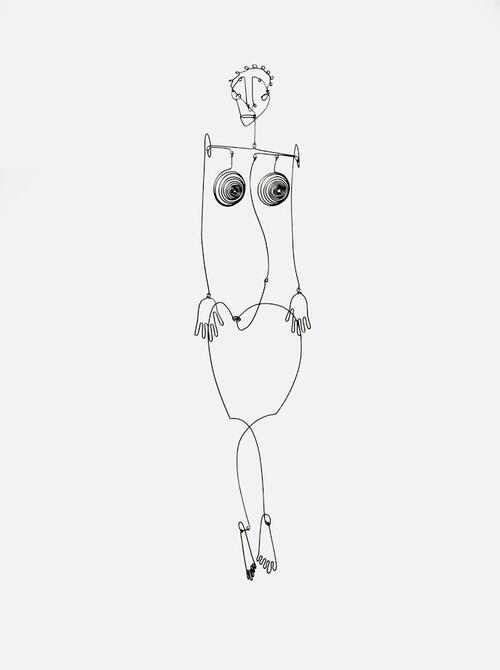 As both artists explored further into non-representational abstraction, their paths diverge. As one artist explores concepts of negative space the other seeks to add additional weight to positive space and vice versa showing that the space between wire lines is just as significant as the wire itself. “For Calder it’s often a process of construction,” states Timothy Anglin Burgard, Distinguished Senior Curator and Ednah Root Curator in Charge of American Art. “He said his goal was to create a larger conception of the universe. For Picasso, it’s less about construction and more deconstruction.

(Installation view of 'Calder-Picasso' at the de Young Museum, photography by Gary Sexton. Image via FAMSF)

It also seems like the most romantic section with Calder's present to his wife, a miniature mobile, Louisa's Valentine, and Picasso's Woman with Outstretched Arms, though his particular treatment of women leaves much to be desired. 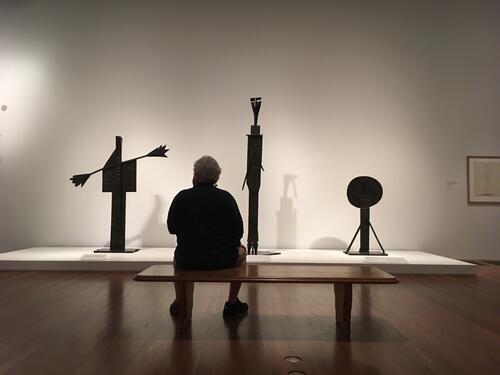 This exhibition seems made for the COVID crowd as the often cramped rooms and gallery spaces packed with display cases have given way to single works taking an entire wall and the space to view Calder's mobiles, spinning ever so subtly, require that we stay at least six feet apart. The one unfortunate aspect of COVID is the inability to persuade the mobiles to move just a little more with one strong breath. Since I was there on a slow day, I may have convinced other patrons to make wind currents with their jackets. I DO NOT suggest doing this when more than two patrons are in the room with you. The shadow play on the walls provided us trouble makers with seconds of contemplative joy that I think most of the world could use more of.

Additionally, Frida Kahlo: Appearances Can Be Deceiving has now been extended to May 2, Uncanny Valley: Being Human in the Age of AI is open until June 27, and Nampeyo and the Sikyátki Revival is on display until February 26, 2023. Be sure to check the Museum's new safety guidelines and reserve timed-tickets before you go.