The Crown Season 2 premieres December 8 on Netflix and it couldn’t be more timely. Between the bombshell engagement of Prince Harry to Meghan Markle and the recent 70th anniversary of Queen Elizabeth II and Prince Philip, royal romance is in the air. However, as the volatile passions of season 1 and tantalizing trailers for season 2 attest, the course of royal love never did run smooth. To help you get your fix of diamond-encrusted drama in between binge-watch sessions, we’ve compiled the crown jewels of rocky, blue-blooded love affairs accompanied by historic artworks. And don’t forget to check out our sizzling selections for Season 1 as well!

Lovers on the DL 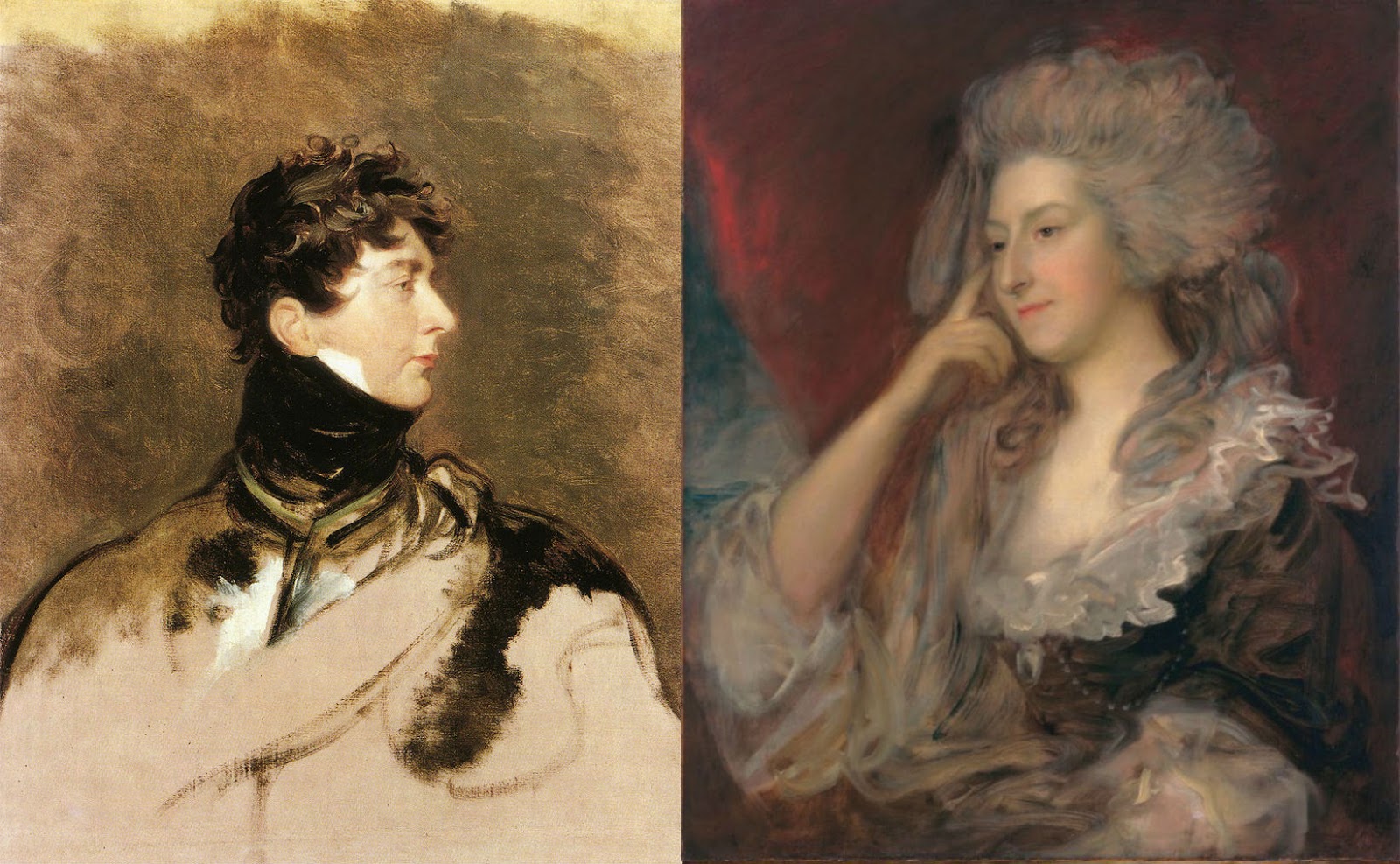 George IV and Maria Fitzherbert were kind of like Romeo and Juliet, except neither was a virgin and they decided seeing other people was more practical than suicide. Maria was a Catholic commoner who had already buried two husbands before she hooked up with the young Prince of Wales, future King George IV. They married in secret since it was illegal for a prince to wed without royal approval. The Pope declared the marriage valid, but George was coerced into breaking with Maria to marry his cousin, Duchess Caroline of Brunswick. When George first saw Caroline he was so disgusted he downed a brandy and later passed out drunk on their wedding night (though he did manage to knock her up). As for Maria, he continued to call her, “the wife of my heart and soul.” Caroline took the rejection in her stride by galavanting around Europe with her handsome Italian manservant. In response to George’s many failed attempts to catch them cheating and divorce her, she quipped, “I have only committed adultery with one man...Mrs. Fitzherbert’s husband.” Burn! 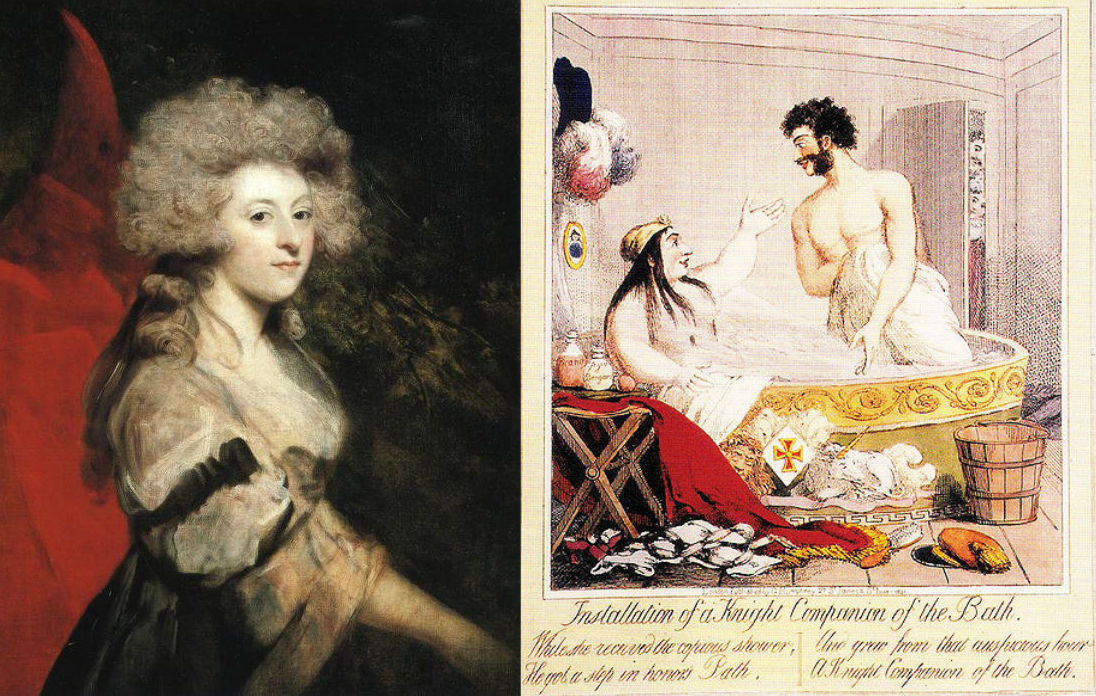 Compared to the delicate Mrs. Fitzherbert by Joshua Reynolds (left), the “ugly” Queen Caroline suffered in the estimation of George, whose opinion is reflected in this cartoon of her cuckolding him with her reputed lover (right).

George severed ties with Maria after becoming king (a prince who married a Catholic couldn’t inherit the throne), but on his deathbed, he kept a letter from her under his pillow and asked to be buried with a miniature painting of her eye around his neck. His brother, the new King William IV, offered to make Maria a duchess to posthumously recognize their relationship. She refused this grand offer in exchange for permission to dress in widow’s mourning for her long-lost love. 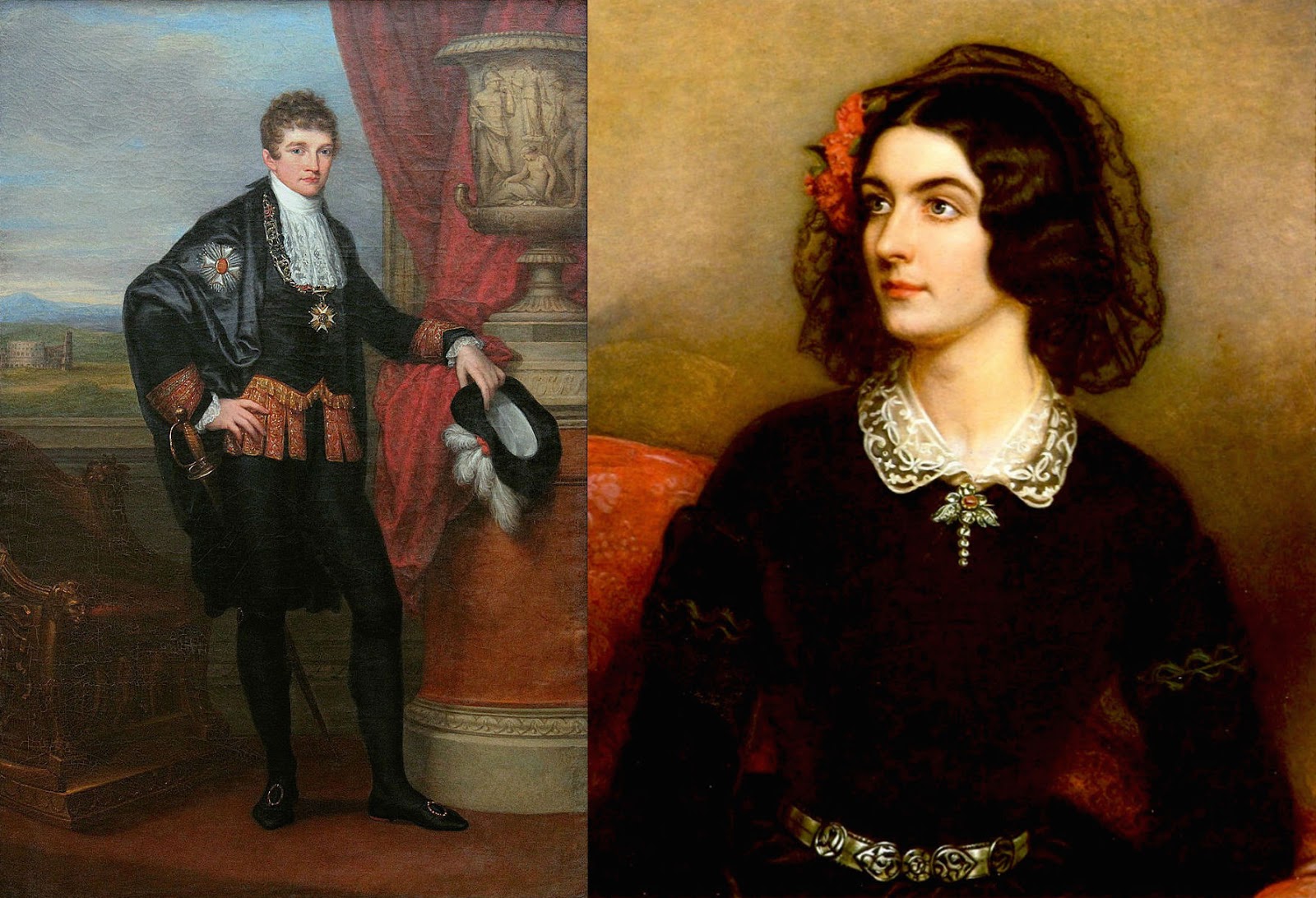 Lola Montez probably never wore daisy dukes with a bikini on top, but she melted plenty of popsicles in her time and did indeed reside in the Golden State. Born Eliza Rosanna Gilbert in Ireland and raised in India, she rose to notoriety as an exotic dancer under the stage name, Lola Montez. 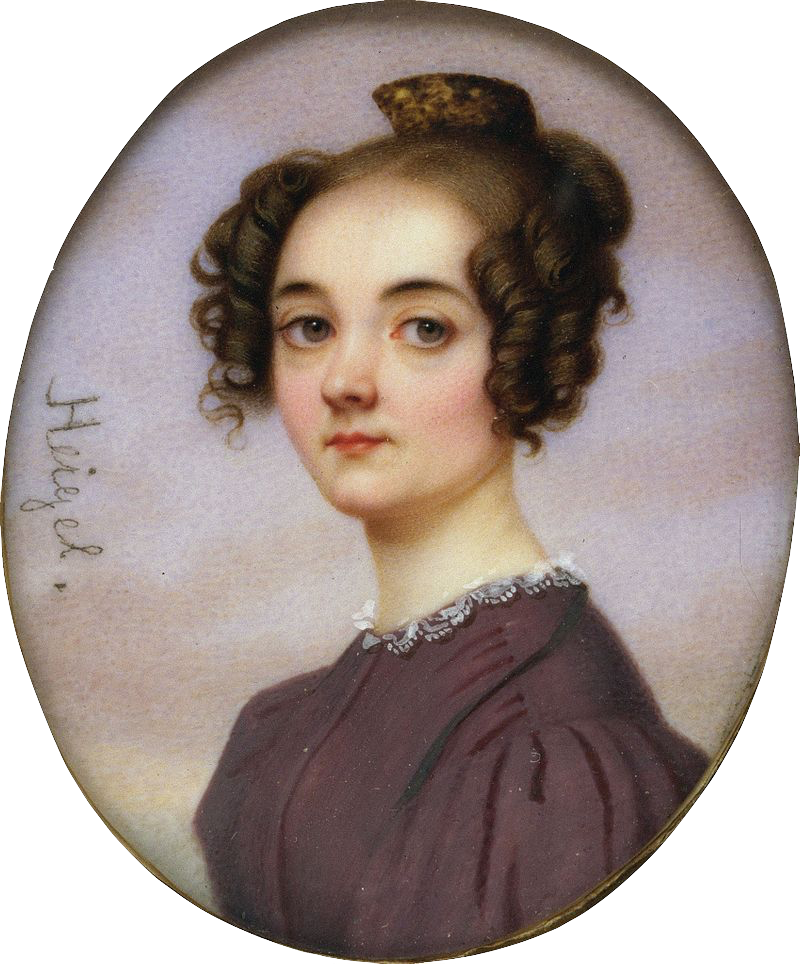 Young Eliza before she was “Lola Montez,” by Joseph Heigel, in the Metropolitan Museum of Art.

Lola bed-hopped her way through three husbands and multiple lovers, most prominently King Ludwig I of Bavaria. Her affair with Ludwig started when he asked if her breasts were real, and she proved it by ripping open her bodice to reveal exhibits A and B. Ludwig must have liked what he saw, as they became romantic partners and Ludwig elevated her to the title of Countess of Landsfeld. Though Lola used her influence for liberal reforms, the people resented the commoner’s rise to nobility, and her relationship with the King led to the Revolution of 1848. Lola fled to the California Gold Rush where, legend has it, miners showered her in gold dust as she disembarked in San Francisco. She settled into a humble cabin in Grass Valley before chasing fame and fortune to the goldfields of Australia, and finally moving to Brooklyn, NY, where an obscure headstone marks her unlikely resting place. 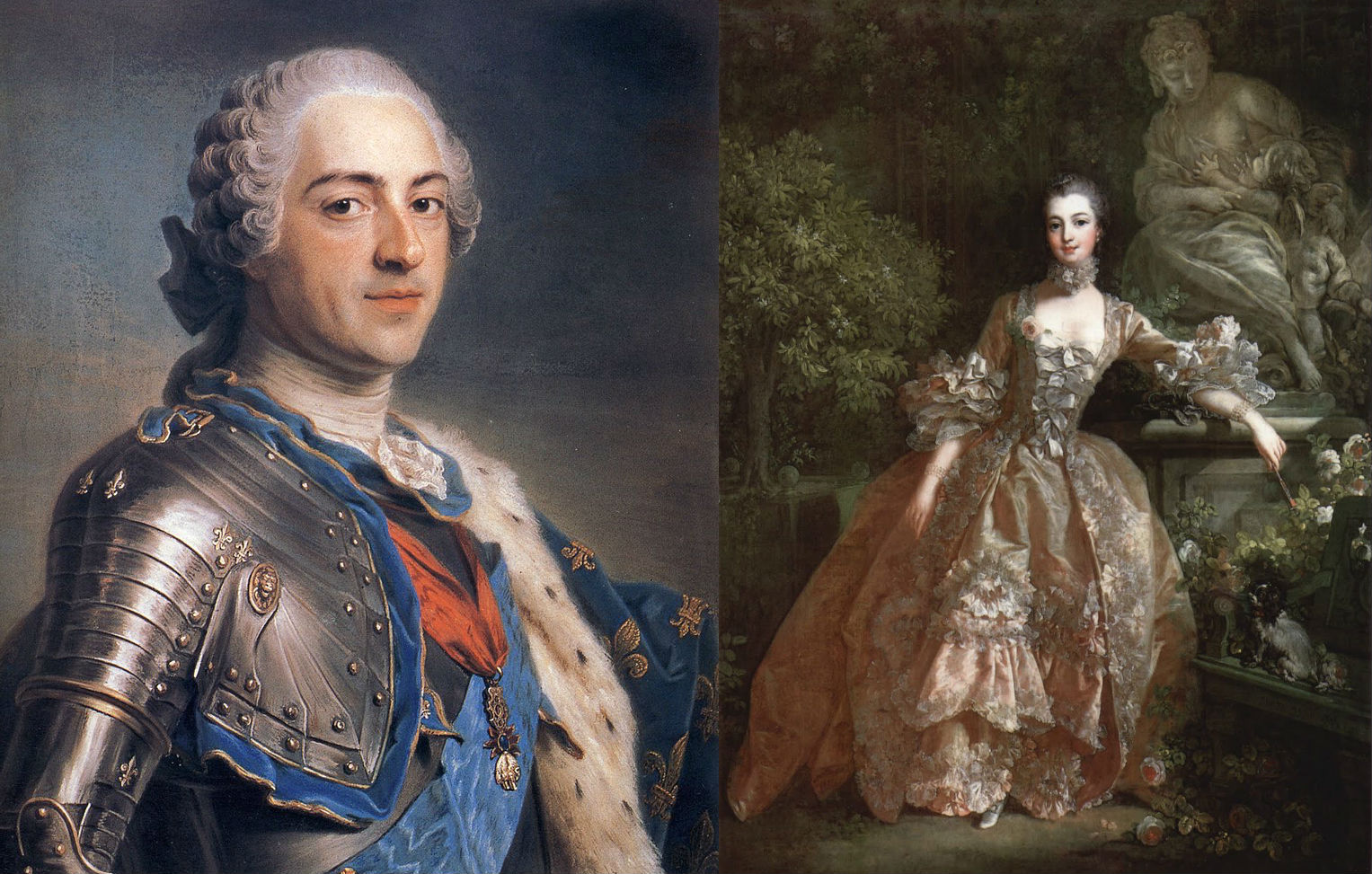 Madame de Pompadour is famous for inspiring Elvis’ hairdo, but she was more than just a rockabilly style icon. When Jeanne Antoinette Poisson (future Marquise de Pompadour) was a little girl, a fortune teller predicted she would win the heart of a king. The prophecy was fulfilled when she became courtesan in chief to Louis XV. Far from just lying back and thinking of France, Pompadour effectively served as Louis’ prime minister, particularly elevating the arts and sciences. She also dictated everything from the chicest shade of pink to troop movements. She even combined her passions for fashion and power, using her cosmetic beauty spots to mark strategic locations on battle maps. 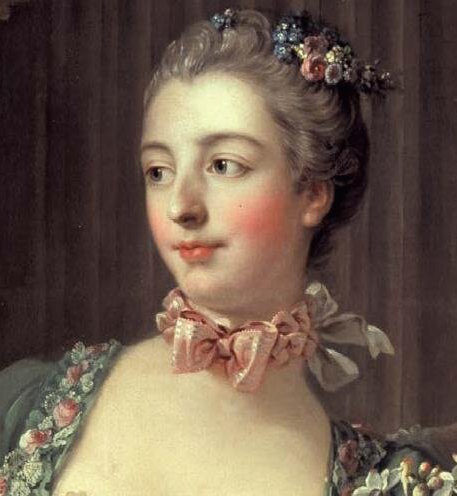 Pompadour rocks her signature updo in this detail of a portrait by Boucher, in the Old Pinakothek.

Not that she neglected her duties in the boudoir in between setting trends and taking names. Louis visited her bedroom nine times a day at the beginning of their relationship, and rumor has it she procured young virgins to keep him interested. Yet it was his big head, not his little one, that was ultimately most attracted to the brilliant Pompadour. After poor health left her incapable of intercourse at just 29, Louis kept her on as his most trusted adviser. He nursed her in her dying illness, and touchingly remarked as rain fell upon her departing coffin, “The Marquise won’t have good weather for her journey.” 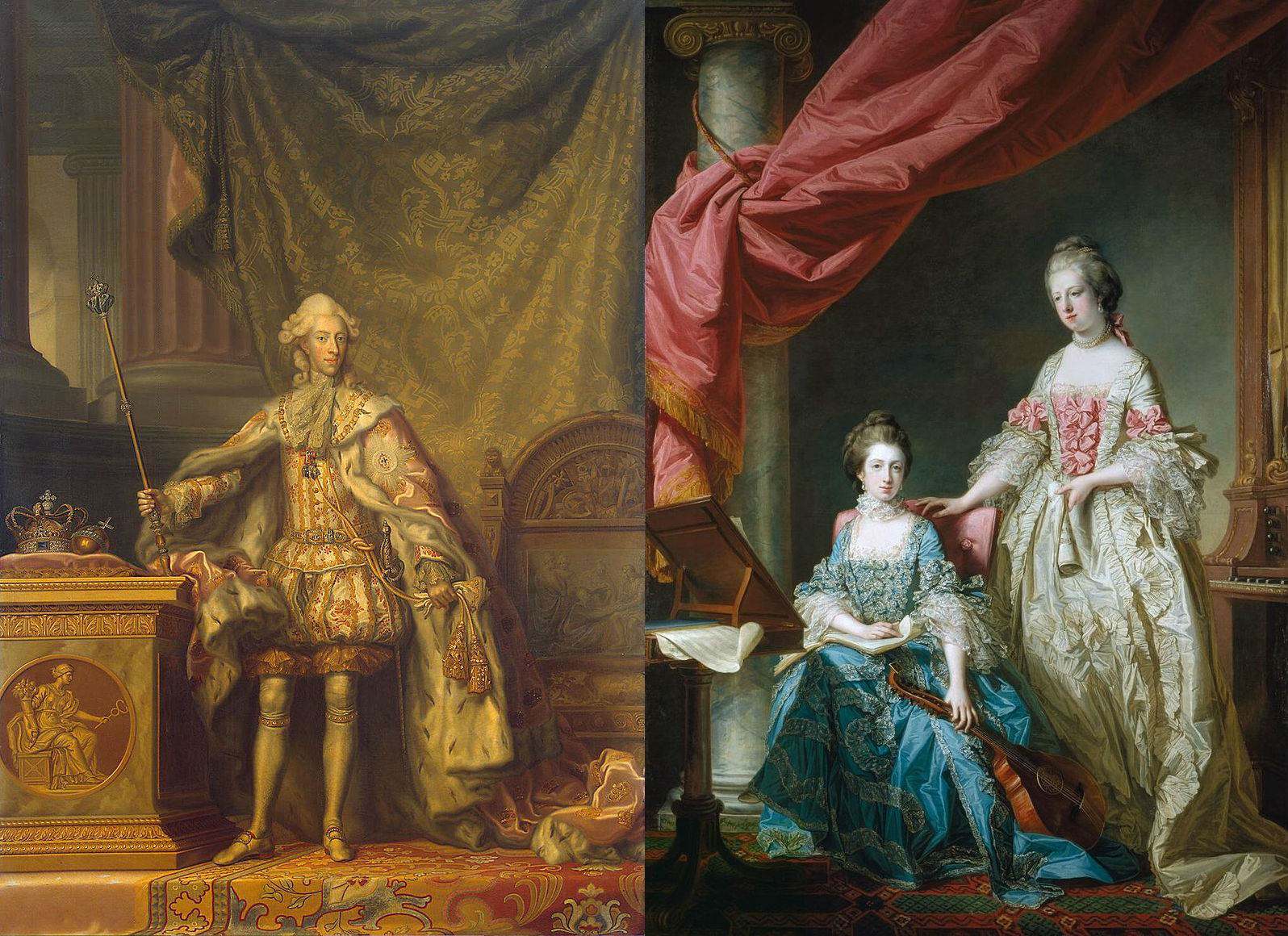 Princess Caroline Matilda of Great Britain was only 15 when she came to Denmark to marry her cousin, the insane and debauched Christian VII of Denmark. As a sister of King George III, she was also coincidentally the aunt of our previous royal romantic, George IV. Caroline Matilda was attractive, though considered too plump for a true beauty (apparently fat-shaming was a thing back then too); but King Christian preferred to amuse himself with numerous ladies of ill repute, and according to court gossip, the occasional gentleman too. His rather creative defense was that it was “unfashionable to love one’s wife,” (don’t try that line at home, husbands). Caroline Matilda found solace in the bed of the King’s physician and close friend, Johann Friedrich Struensee. 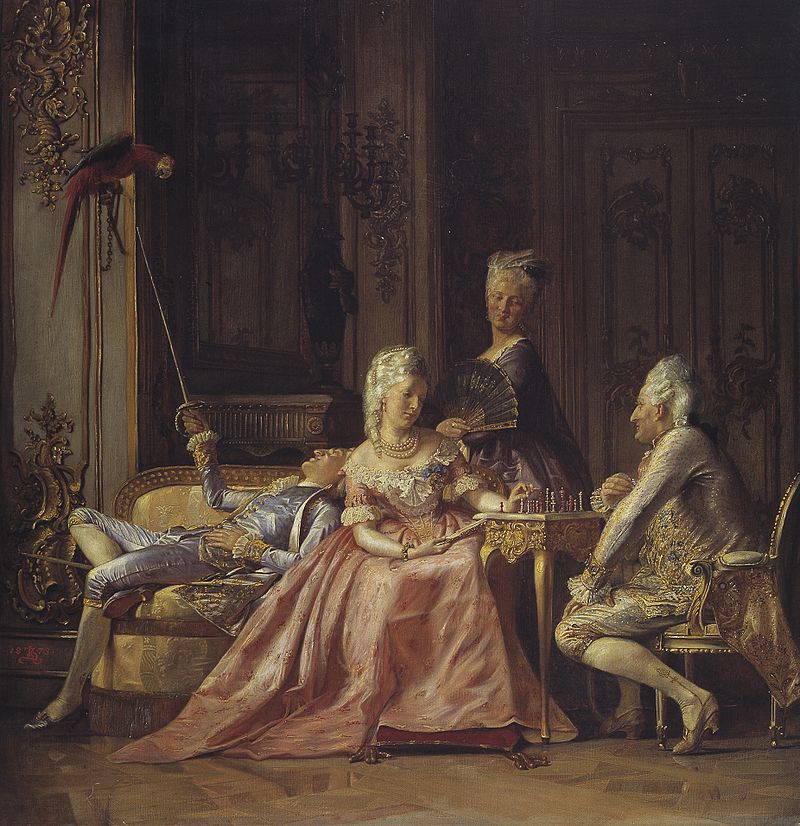 Depiction of Caroline Matilda “playing” with Johann while her distracted husband dallies with his bird, by Kristian Zahrtmann, in the Saatchi Gallery.

Despite the strain on her marriage, Caroline Matilda had two children, but her youngest bore an undeniable resemblance to Johann. As Christian descended further into madness, she and Johann seized power and enacted sweeping progressive reforms, earning them many enemies among the conservative aristocracy. Christian’s stepmother ousted the adulterous lovers and installed her own son as de facto ruler. Johann was beheaded, and Caroline Matilda died in exile at the tender age of 23. Their story was successfully dramatized in the Oscar-nominated A Royal Affair (2012), featuring Alicia Vikander in her star-making role. In movieland, plump translates to Alicia Vikander, which must mean Kate Moss equals big-boned. 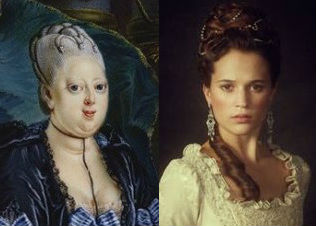 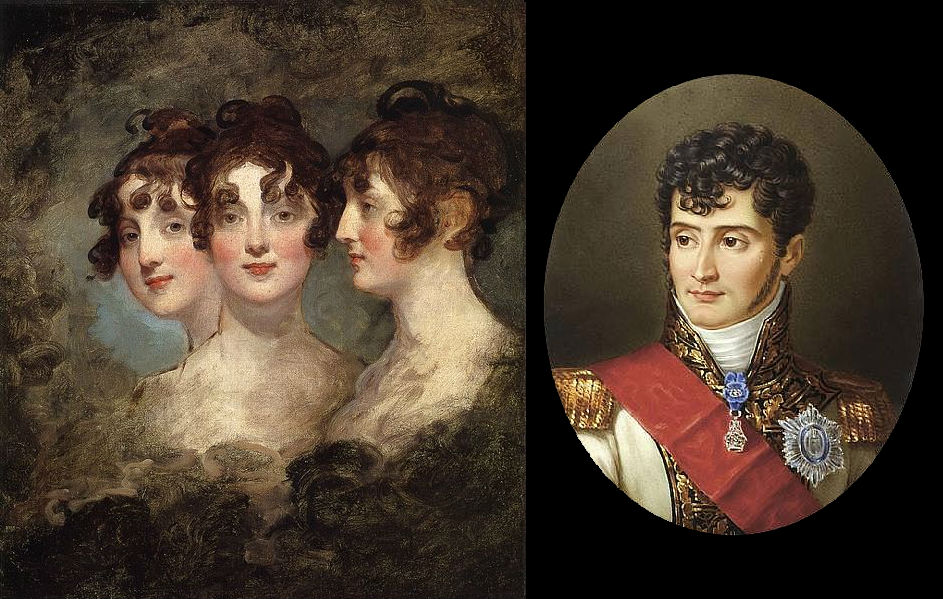 Before Grace Kelly or Meghan Markle, Elizabeth “Betsy” Patterson was America’s first princess. The Baltimore society darling was hailed as the greatest American beauty of her time; so beautiful that Gilbert Stuart evidently felt a need to paint her from three different angles. Jerome Bonaparte, Napoleon’s baby brother, confirmed this opinion when he shook the foundations of the French Empire by marrying Betsy against Napoleon’s orders. She didn’t exactly seem eager to contain the scandal when she walked down the aisle in a wedding dress so skimpy that eyewitnesses said it “would fit easily into a gentleman’s pocket,” and called the bride, “an almost naked woman.” 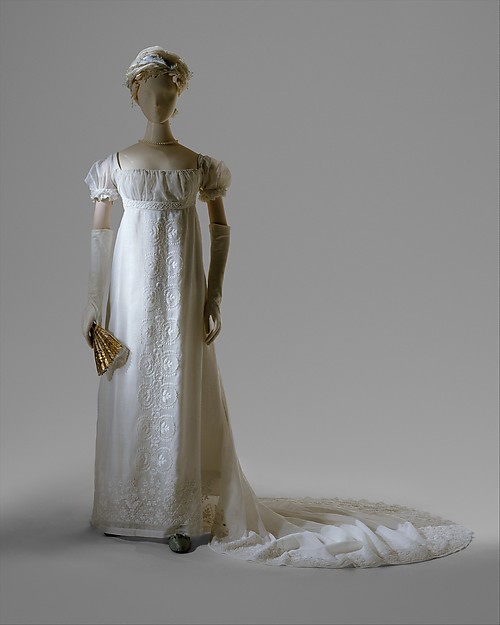 Evening Dress worn by Betsy, possibly her wedding dress, in the Metropolitan Museum of Art. Note the transparent bodice and sleeves: I do declare, fetch the smelling salts!

Napoleon was decidedly not amused, and when Jerome tried to bring his lovely wife home to France the couple was refused entry to the entire continent of Europe. Jerome left a pregnant Betsy behind with the promise to do whatever it took to win his brother over, never to meet her again. Though Betsy bore Jerome a healthy son and they were still officially married, Napoleon pressured his brother to wed Princess Catharina of Wurttemberg. Betsy was not as patient with his faithlessness as the long-suffering Maria Fitzherbert had been. She obtained a divorce and spent the rest of her long life fighting for a settlement fit for Ivana Trump.

When Napoleon tried to dismiss her, she replied, “Tell him Madame Bonaparte is ambitious and demands her rights as a member of the imperial family.” (get it, girl!). The French government granted her a pension, but never acknowledged her claim to nobility and denied her son inheritance rights.

All of these fascinating couples (and threesomes) have appeared on screens big and/or small, but we’d love to see them get the $100,000,000 Netflix treatment. Leave a comment to let us know which royal romance is your favorite, and who you think should be Netflix’ next big hit!