Claire Foy as Elizabeth II in The Crown.

This month, while most Americans were glued to post-election coverage, those of us who secretly hoped for a restoration of British monarchical rule to save us from ourselves were binge-watching The Crown, Netflix’ $100,000,000 extravaganza centering on Britain’s longest-reigning monarch Queen Elizabeth II.  But this financially daring mega-drama is more than just an excuse for enough jewelry and vintage couture to make the Kardashians look like Duck Dynasty.  It is also a portrait of a complicated royal marriage.  Queen Elizabeth and Prince Philip, at ages 90 and 95 respectively, just celebrated their 69th anniversary.  In their honor, we’ve chosen some of our favorite royal romances as exemplified by historic paintings, which prove that sizzling, blue-blooded lovin’ has always made for good soap opera and good art. 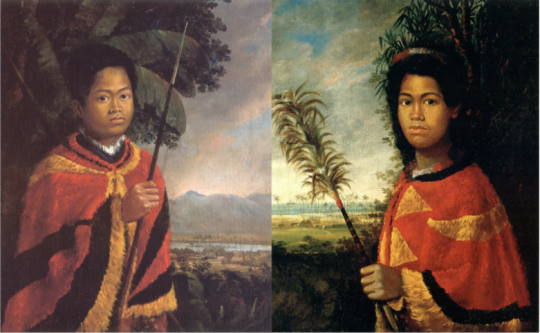 Kamehameha III and Princess Nahi’ena’ena by Robert Dampier, in the Honolulu Museum of Art.

You probably never read about these two in history class, because…whitewashing….but King Kamehameha III and his sister Princess Nahi’ena’ena of Hawaii had a Jaime and Cersei Lannister thing going on.  Unlike in Westeros, brother-sister matches were encouraged among the Ali’i (high chiefs) in pre-Christian Hawaii, but the increasingly powerful Western missionaries considered them abomination, creating a rift in their relationship.  They still met in secret, and Kamehameha III even declared Nahi’ena’ena’s child by her arranged marriage to another man to be his. The baby died soon after birth, and Nahi’ena’ena never recovered.  She died of undetermined causes at just 20, some say of a broken heart.  Sadly, Hollywood hasn’t picked up this tragic romance, but we have our fingers crossed for a big-screen Hawaiian epic…hopefully not directed by Cameron Crowe starring Emma Stone in Polynesian-face. 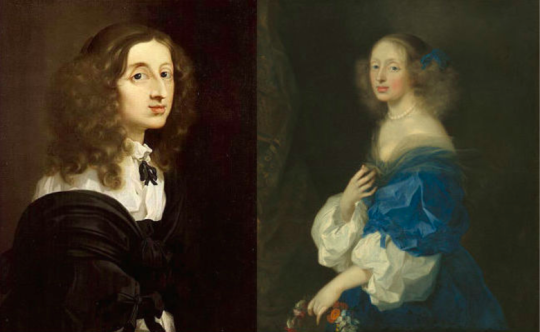 Queen Christina of Sweden has become an icon of the LGBTQ community for pioneering gender fluidity almost 400 years before her time.  She identified primarily as female, but also identified strongly with her masculine side, often preferring men’s dress and sport activities.  She most likely had a lesbian partnership with Ebba Sparre, whom Christina described as her “bedfellow.” Contemporary historians labeled Christina as a “hermaphrodite” and the world’s ugliest monarch.  Since male historians often apply such stereotypes to people who smash the patriarchy, those portrayals may be exaggerated.  She was played by screen goddess Greta Garbo in Queen Christina (1933), laced with provocative Gay innuendo despite a script liberally peppered with heterosexual romance, and by Malin Buska in The Girl King (2015). 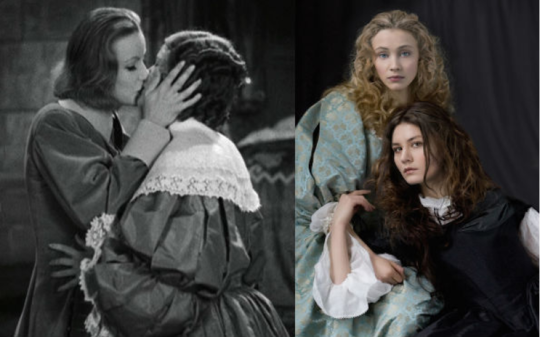 One of cinema’s first same-sex kisses from Queen Christina (left). Malin Buska and Sarah Gadon get a little too close for Mike Pence’s comfort in The Girl King (right). 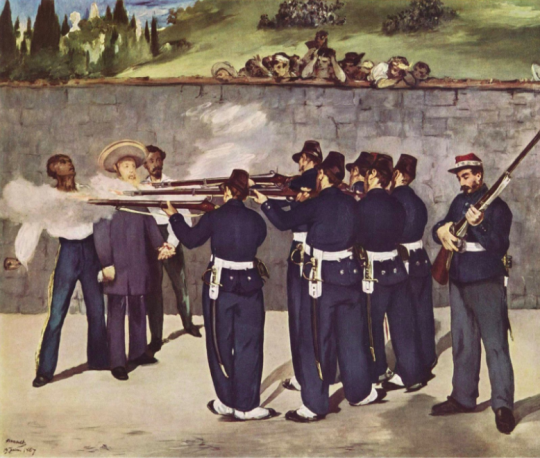 Execution of Emperor Maximilian of Mexico by Edouard Manet, in the Art Gallery of Manheim.

Who knew that behind Manet’s masterpiece, there’s a tragic royal romance.  Emperor Maximilian of Mexico and his wife Carlota (Princess Charlotte of Belgium) were considered one of the most beautiful couples of their time, despite his apparently originating awkward hipster facial hair, 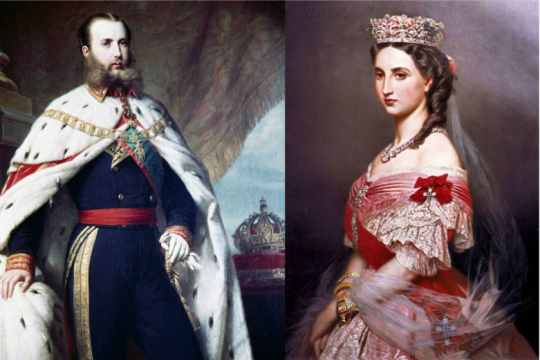 Rumors persist of affairs on both sides, and possibly an illegitimate baby on her part, but most signs indicate that they loved each other even to the point of madness.  Napoleon III set up the couple as puppet rulers of the doomed Mexican Empire, convincing Maximilian that the people of Mexico wanted a foreign intervention.  Though Maximilian instated many progressive policies to help the poor and improve human rights, the revolutionary leader Benito Juarez toppled his regime.  Carlota rushed to Europe to rally support, only to sink into insanity.  Maximilian never saw his beloved again, and was executed by firing squad (as portrayed by Manet).  Carlota died in Belgium at the great age of 86, still believing herself to be the Empress of Mexico, and talking to a doll she called “Max.”  They were portrayed by Brian Aherne and Bette Davis in Juarez (1939). 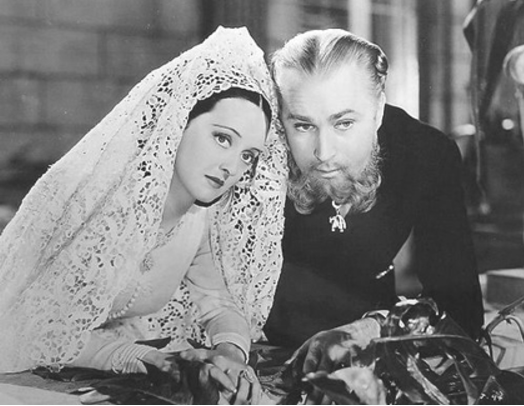 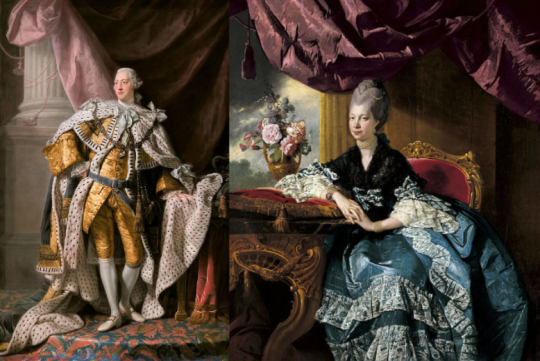 King George III in Coronation Robes by Allan Ramsay, in the Art Gallery of South Australia  (left). Queen Charlotte of Great Britain by Johann Zoffany, in the Royal Collection of the United Kingdom.

America’s #1 supervillain King George III was actually a pretty nice dude.  For one thing, he was fiercely loyal to his reputedly plain wife Queen Charlotte, even refusing to take part in the royal custom of keeping numerous mistresses.  Furthermore, both racist detractors and abolitionist supporters touted Charlotte’s “mulatto” features and promoted rumors that she had African ancestry, a claim mostly disputed by historians.  The rumors didn’t bother George, who got busy in the sheets with Charlotte, spawning 15 children.  George’s alleged “madness” (he did suffer from sporadic mental illness, but reports are often exaggerated), was the subject of The Madness of King George (1994), starring Nigel Hawthorne and Helen Mirren.  George is also a direct ancestor of The Crown’s Queen Elizabeth II, meaning if Charlotte did have black ancestry, the modern-day royal family is also part black. 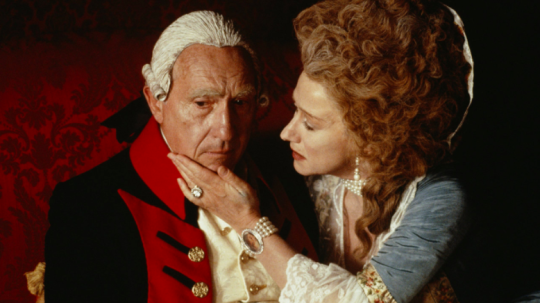 Nigel Hawthorne and Helen Mirren as George and Charlotte in The Madness of King George. 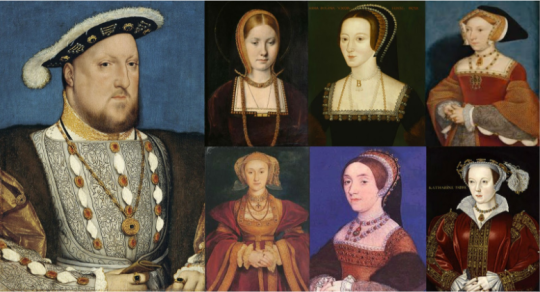 Henry VIII was a sixteenth-century Hugh Hefner with an axe to grind.  He started his own religion and was declared the antichrist by the Catholic Church, all to get a fresh piece of tail.  But he gets something of a bum rap for executing his wives…he only beheaded two, after all!  The old adage, “Divorced, beheaded, died, divorced, beheaded, survived,” is surprisingly accurate.  For juicier tidbits on his six marriages, click here!  As you can see from these paintings, Henry was rather pudgy and pasty, and most of his wives unconventionally beautiful by modern standards.  Hollywood has responded accordingly by casting a series of people who look like pornstars in biopics.  Showtime’s softcore spectacular The Tudors (2007-2010) is legendary, but for some actual history, check out the BBC’s Wolf Hall (2015).  Fans of The Crown should tune in for breakout star Claire Foy as Anne Boleyn. 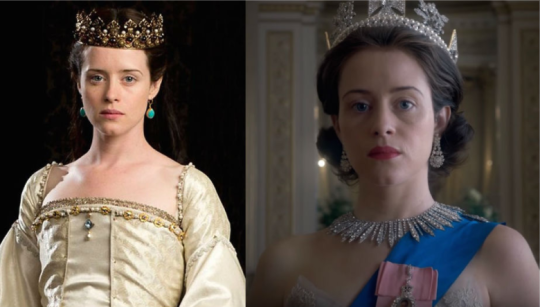 Claire Foy channels two British Queens as Anne Boleyn in Wolf Hall (left), and Elizabeth II in The Crown (right). There are worse things to be typecast as than royalty.

All episodes of The Crown are currently available on Netflix, so heat up the popcorn and set your queue for ten hours of glamour, scandal, and some top-notch acting to boot.  Need another fix for your royal romance needs? Log onto Sartle for more lusty anecdotes of how the other one percent lives!