This March, Turner Classic Movies is featuring films about art and artists, airing Mondays at primetime.  The festival showcases 18 films on themes ranging from conventional biopics to stylish horror-thrillers, all with one thing in common: awesome art!  I’ll be tuning for a few of my old favorites, and some newfound gems I can’t wait to watch.  Join me for my top ten picks, and leave a comment with your ratings.  I’d love to hear your thoughts!

In this sweeping spectacle from the golden age of Hollywood epics, Charlton Heston gives an impassioned performance as Michelangelo, alongside Rex Harrison in a brainy supporting role as Pope Julius II.  The film follows the artist’s painting of the Sistine Chapel through the political upheavals of the High Renaissance.  Nominated for 5 Academy Awards, this is the Ben Hur of art movies.  However, don’t expect the least hint of Michelangelo’s homosexuality from the ultra-conservative Heston. 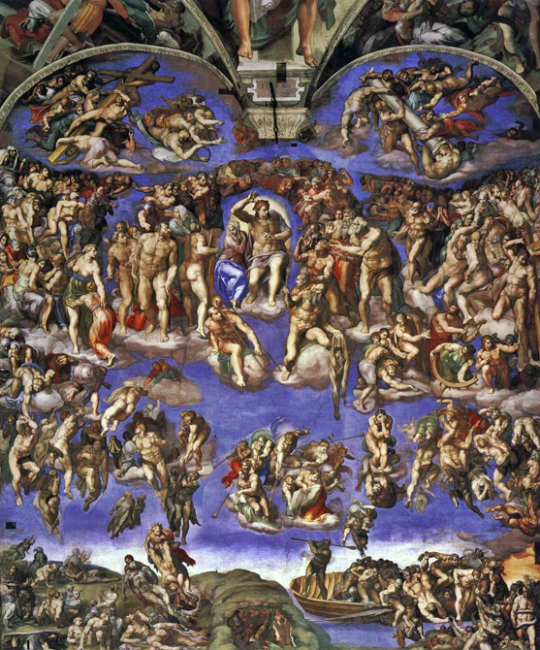 The Last Judgement from the Sistine Chapel, by Michelangelo. 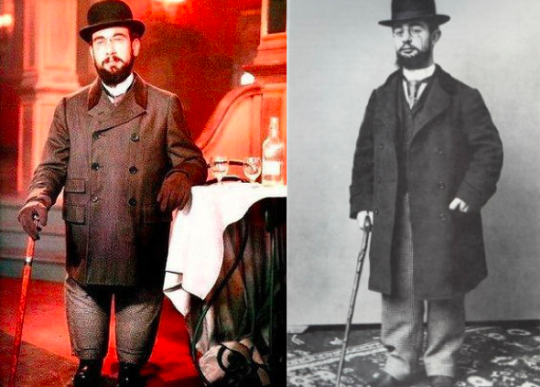 Jose Ferrer in Moulin Rouge (left), and Henri de Toulouse-Lautrec (right). Ferrer had his legs bound to his upper body and walked on his knees for the role.

While not as popular as Baz Luhrmann’s pop-rock musical extravaganza, John Huston’s Moulin Rouge is much more accurate.  Jose Ferrer gives a heartbreaking performance as the tortured artist.  The memorable supporting cast includes one of our favorites, Christopher Lee as Georges Seurat, and the one and only Zsa Zsa Gabor as Jane Avril.  The film won Academy Awards in Art Direction and Costume Design for its vivid recreations of Lautrec’s paintings. 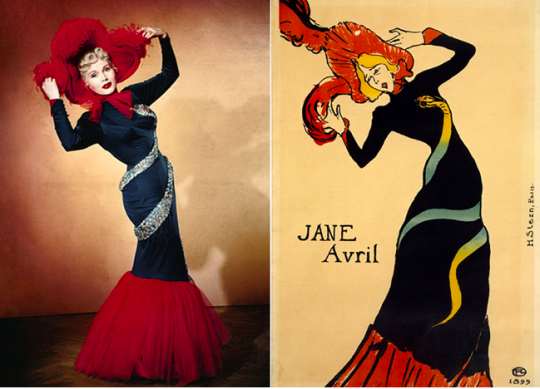 Zsa Zsa Gabor as Jane Avril in one of the film’s Oscar-winning costumes (left), and Jane Avril, 1899 Poster in the Toulouse-Lautrec Museum (right). 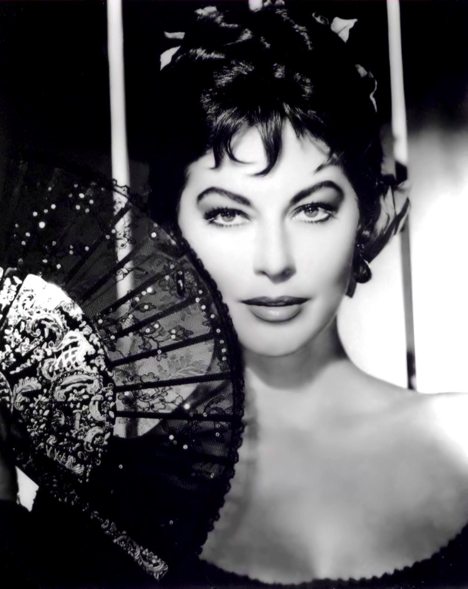 Ava Gardner as Goya’s muse, the Duchess of Alba: publicity photo for The Naked Maja.

In The Naked Maja, smoldering Ava Gardner plays the inspiration for Francisco Goya’s sexiest nude.  If that isn’t reason enough to watch, the film also boasts glorious technicolor and attractive costumes.  This film was made during the Hollywood Production Code, so don’t expect any full frontal.  Even so, the US Post Office confiscated several thousand publicity postcards of Goya’s original painting, declaring them pornographic.  Ironically, the plot of the film follows Goya’s battle against the censorship of the Spanish Inquisition. 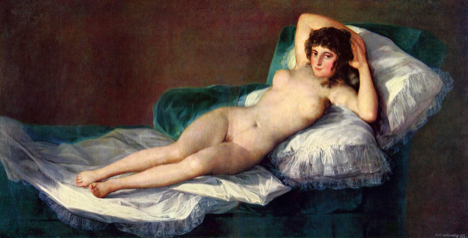 The Nude Maja by Francisco Goya, in the Prado National Museum.  The identity of the model is unknown, and in reality she was most likely not the Duchess of Alba. 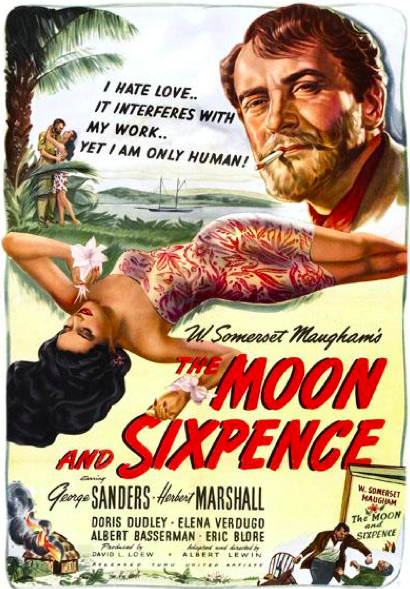 Poster for The Moon and Sixpence.

This movie is to Paul Gauguin what Citizen Kane was to William Randolph Hearst.  Based on a novel by Somerset Maugham, it tells the “fictional” tale of a man who abandons his wife and children to pursue a life of painting.  Along the way, he destroys everyone he touches with his lusty exploits, and heads to the South Pacific to paint and cavort with scantily clad island girls.  So no, nothing like the life of Paul Gauguin at all.  A witty script and the poison-tongued delivery of George Sanders as the artist “Charles Strickland” make for a deliciously wicked character assassination. 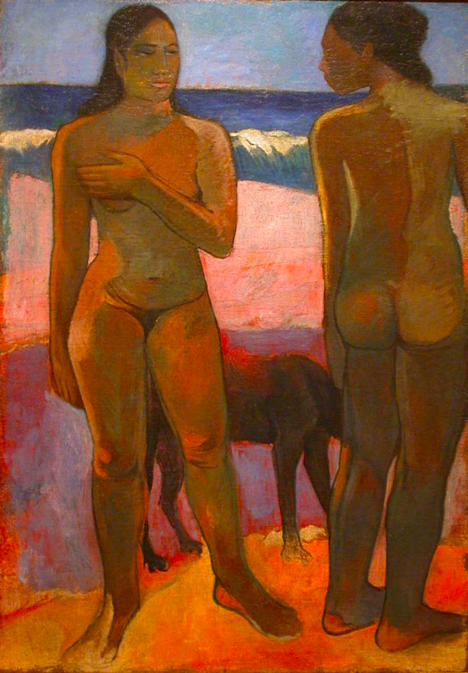 Two Nudes on a Tahitian Beach by Paul Gauguin, in the Honolulu Museum of Art. 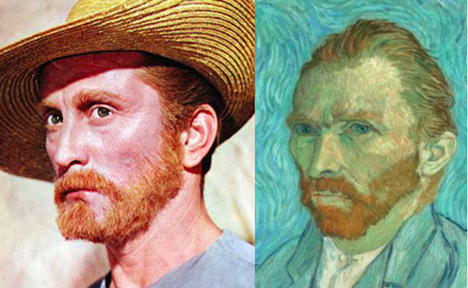 Kirk Douglas as Vincent van Gogh in Lust For Life (left), and detail from Self-Portrait by van Gogh, in the d'Orsay Museum (right).

Lust For Life is a good follow-up to The Moon and Sixpence, as it portrays van Gogh’s complicated relationship with Gauguin, played by Anthony Quinn, who won a best supporting actor Oscar for his performance.  Kirk Douglas was nominated for best actor for his startling transformation into Vincent van Gogh, and the magnificent art direction was also nominated.  This film was shot largely on location in Europe, in the real places the artist painted.  The art director and set decorators meticulously recreated the compositions of van Gogh’s most iconic paintings. 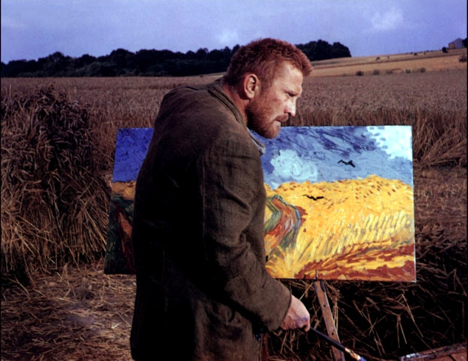 Kirk Douglas as Van Gogh, painting in one of the films many authentic locations.  Douglas practiced painting crows to imitate Van Gogh’s technique in this scene. 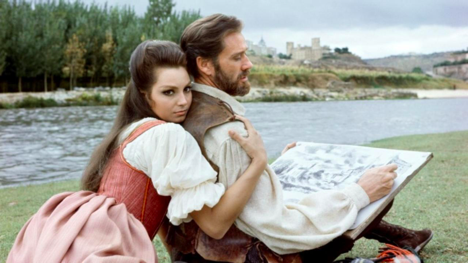 This steamy Italian biopic follows a forbidden romance between El Greco, played by Mel Ferrer, and betrothed noblewoman Jeronima de las Cuevas, played by the gorgeous Rosanna Schiaffino.  This will be a first viewing for me, but available images promise a sumptuous, richly textured production, with more than a pinch of sex appeal. 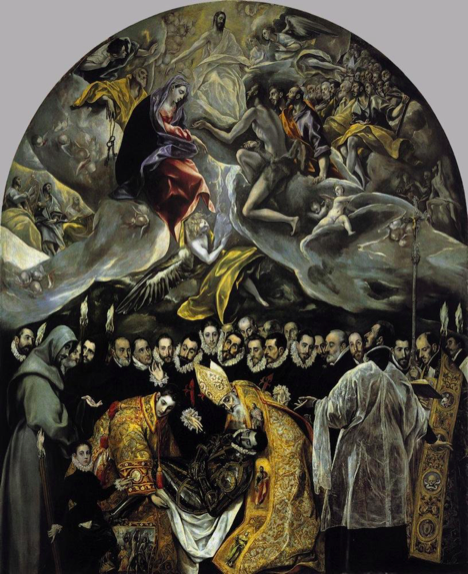 The Burial of the Count of Orgaz by El Greco, in the Church of Santo Tome. 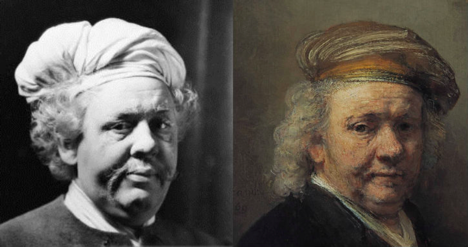 Charles Laughton in Rembrandt (left), and Self-Portrait by Rembrandt van Rijn, in the Mauritshuis (right).

This will also be my first time viewing Rembrandt.  Charles Laughton, one of the most brilliant actors of the 20th Century and not a bad likeness if I do say so myself, plays the artist.  He is joined by his real-life wife, the incomparable character actress Elsa Lanchester of Bride of Frankenstein fame, playing Rembrandt’s mistress, Hendrickje Stoffels.  Elegant black and white cinematography appears to cleverly use lighting to capture the essence of the artist’s work without the use of color. 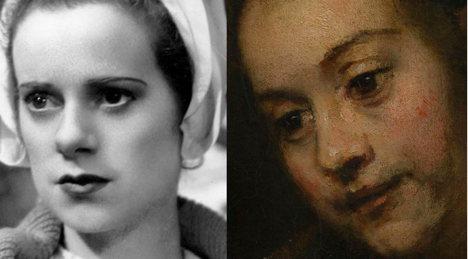 Elsa Lanchester as Hendrickje Stoffels (left), and detail from a portrait of the real Stoffels by Rembrandt (right).  Another inspired casting decision.

wow, great post. it gave me a lot of useful information.