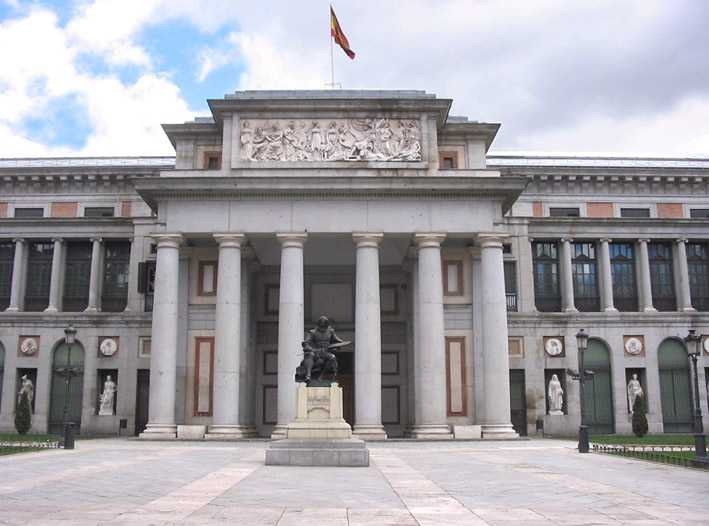 The permanent domain of famous artworks such as Rogier van der Weyden’s Descent from the Cross and Diego Velasquez’s Maids of Honor (better known by the Spanish title Las Meninas.) This museum is also the main hang of dazzling works by peeps like Francisco Goya, Titian, Peter Paul Rubens and Hieronymous Bosch, who painted the delightfully bizarre Garden of Earthly Delights.

The building, made in 1785, was originally meant for an entirely different purpose—the National History Cabinet was supposed to chill there. But then the royal grandson of the time, Ferdinand VII, was advised by his wife to use it as a museum. She was probably all like: “Ferdie honey, the decorator says we need a whole new building to hang all our art!”

Thus, the Royal Museum of Paintings and Sculptures came into being, renamed the Museo Nacional del Prado in 1819 when it became open to the public. We can just call it the Prado Museum, or "the Prado" if you're into the whole brevity thing. Prado (which is a fancy car for upper-class douchebags in my country). means "meadow" in Spanish, because the museum is kindof in a meadow. Muy creative.

When you visit, don't miss the museum's homage to one of Spain’s greatest artists: an entrance called the Goya Gate! And if you're backpacking on a budget, admission is free after 6:00 PM.

Here is what Wikipedia says about Museo del Prado

The Prado Museum (/ˈprɑːdoʊ/ PRAH-doh; Spanish: Museo del Prado [muˈseo ðel ˈpɾaðo]), officially known as Museo Nacional del Prado, is the main Spanish national art museum, located in central Madrid. It is widely considered to house one of the world's finest collections of European art, dating from the 12th century to the early 20th century, based on the former Spanish Royal Collection, and the single best collection of Spanish art. Founded as a museum of paintings and sculpture in 1819, it also contains important collections of other types of works. The Prado Museum is one of the most visited sites in the world, and is considered one of the greatest art museums in the world. The numerous works by Francisco Goya, the single most extensively represented artist, as well as by Hieronymus Bosch, El Greco, Peter Paul Rubens, Titian, and Diego Velázquez, are some of the highlights of the collection. Velázquez and his keen eye and sensibility were also responsible for bringing much of the museum's fine collection of Italian masters to Spain, now the largest outside Italy.

The collection currently comprises around 8,200 drawings, 7,600 paintings, 4,800 prints, and 1,000 sculptures, in addition to many other works of art and historic documents. As of 2012, the museum displayed about 1,300 works in the main buildings, while around 3,100 works were on temporary loan to various museums and official institutions. The remainder were in storage.

Due to the COVID-19 pandemic, in 2020 attendance plunged by 76 percent to 852,161. Nonetheless, the Prado was ranked as the 16th most-visited museum in the list of most-visited art museums in the world in 2020. It is one of the largest museums in Spain.

Check out the full Wikipedia article about Museo del Prado

Prado National Museum is mentioned on our blog -

Guide to Your Best Summer Beach Bod
Well folks, it's that time of year again. The sun is high in the sky and shimmering in ways we…
Sign up
Forgot Password
Reset Password