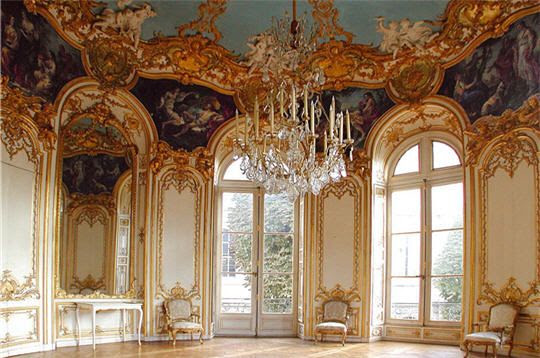 Rococo is an ornamental style of art and interior design which originated in eighteenth-century Paris, characterized by soft colors and curvy lines and scenes of love, nature, amorous encounters, light-hearted entertainment, and youth. The word Rococo is derived from rocaille, which refers to the decorative shell-work in garden grottos and fountains. As French nobles moved back to their Parisian mansions after the death of Louis XIV, they redecorated their homes with stucco adornments and paintings of daily life and courtly love. In contrast to the Grand Baroque style of the king, the designs were softer and made from more modest materials. 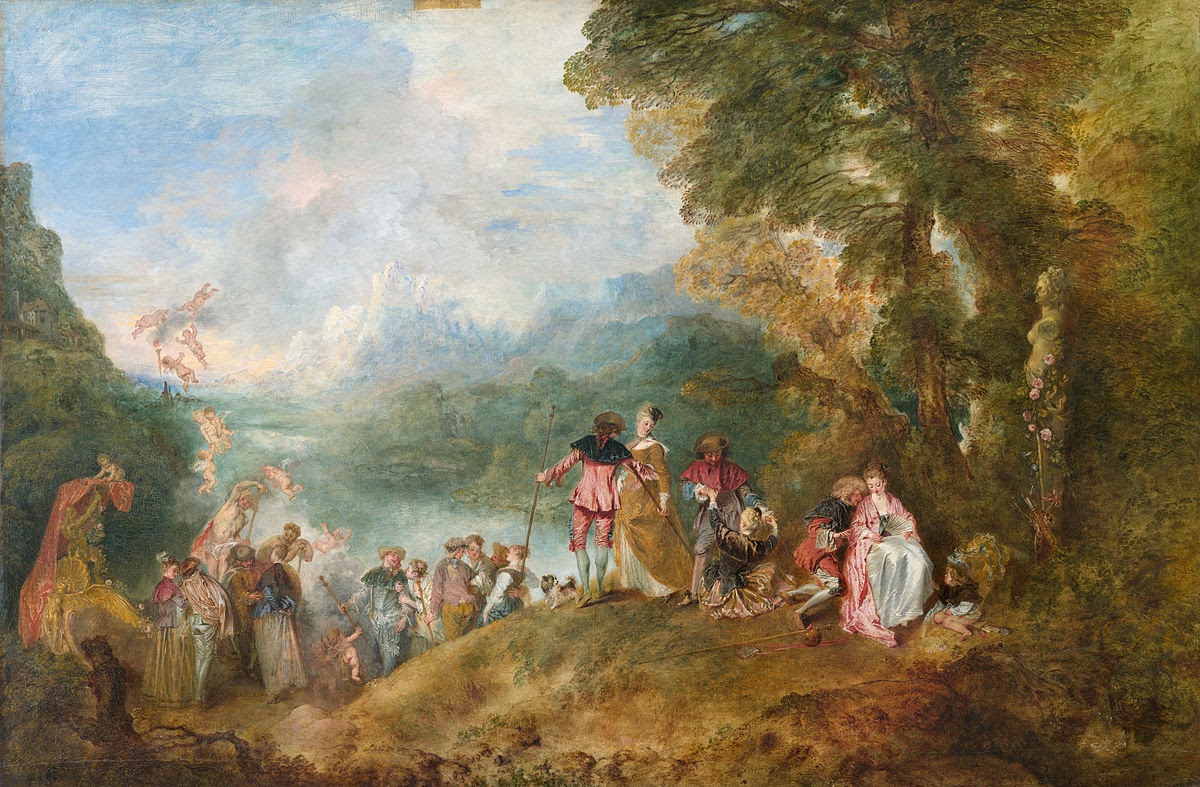 Jean-Antoine Watteau (1684-1721), the father of Rococo painting, invented the fetes galantes, a genre dubbed for him by the French Academy to describe his scenes which combine allegorical and courtly subject matter. The informality of his paintings in comparison to academic painting distanced the nobility from the crown through identification with anti-absolutist forms of leisure, pleasure, and public entertainment. His scenes of wistful encounters were for atmosphere rather than employing a narrative. His reception piece, The Embarkation for Cythera, depicts a group of fashionable aristocrats with each other as they embark to Cythera, the alleged birthplace of Aphrodite, the Greek goddess of love. The figures flirt with each other, giving the painting a conversational and spontaneous quality. 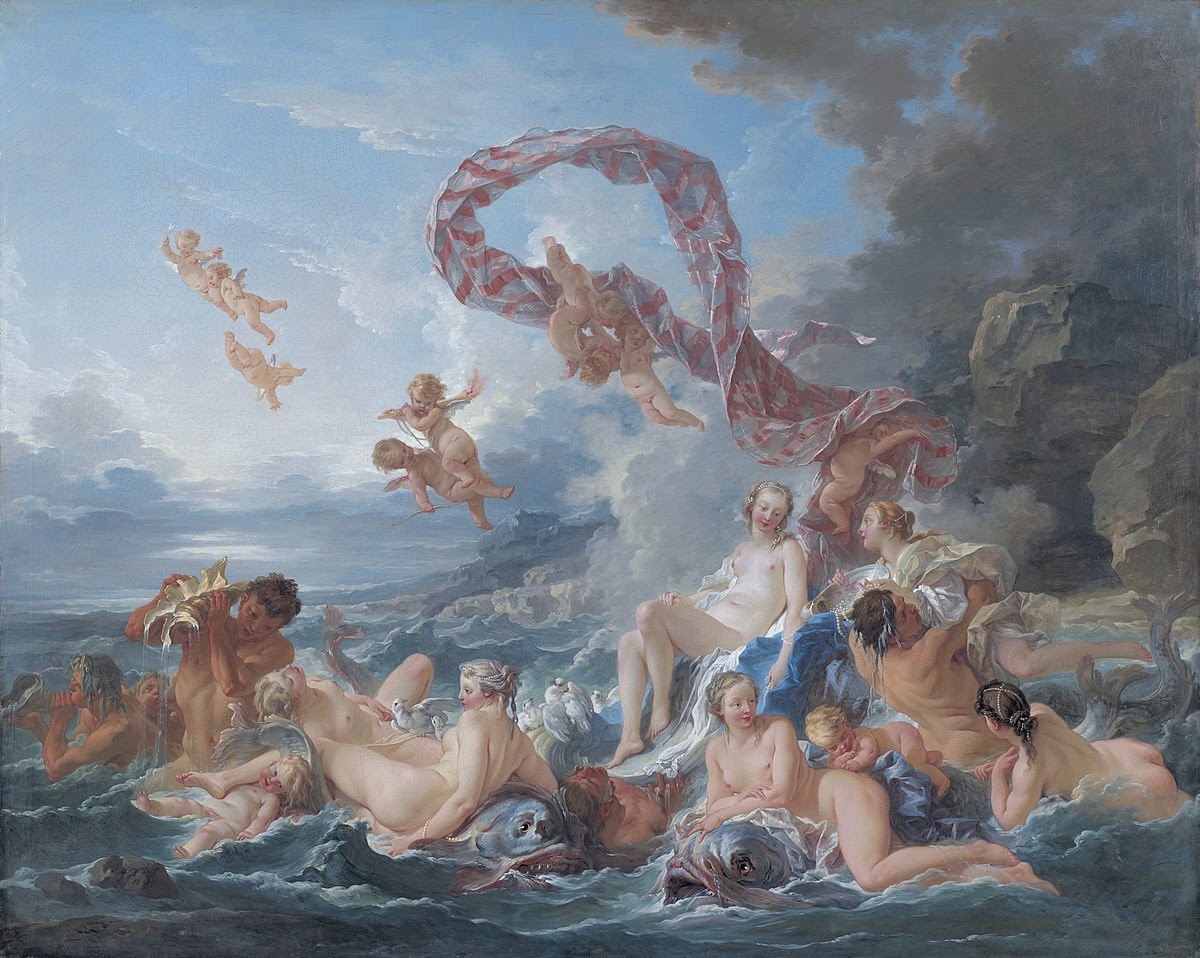 François Boucher, The Triumph of Venus, 1740.

François Boucher (1703-1770) was influenced by Watteau’s work, etching his drawings as a young artist. He went to Italy to study Venetian Baroque and seventeenth-century Dutch landscape painting, and returned to Paris in the 1730s where he garnered acclaim for his large mythological scenes. Boucher is associated with the formulation of the mature Rococo style and its dissemination throughout Europe through all mediums of the decorative arts, ranging from porcelain to tapestries. He is known for his playful sense of eroticism, his style of painterly brushstrokes, and use of pink and blue colors. Boucher reinvented the pastoral landscape painting tradition, replacing the scenes of shepherds with scenes of sentimental and erotic love (and lots of naked women). His painting The Triumph of Venus features the goddess of love more explicitly, showing her after her birth from the foam of the sea, accompanied by water nymphs, tritons, and cherubic putti. Despite the nudity of his figures, Boucher was able to maintain the painting’s propriety through using this allegorical subject. 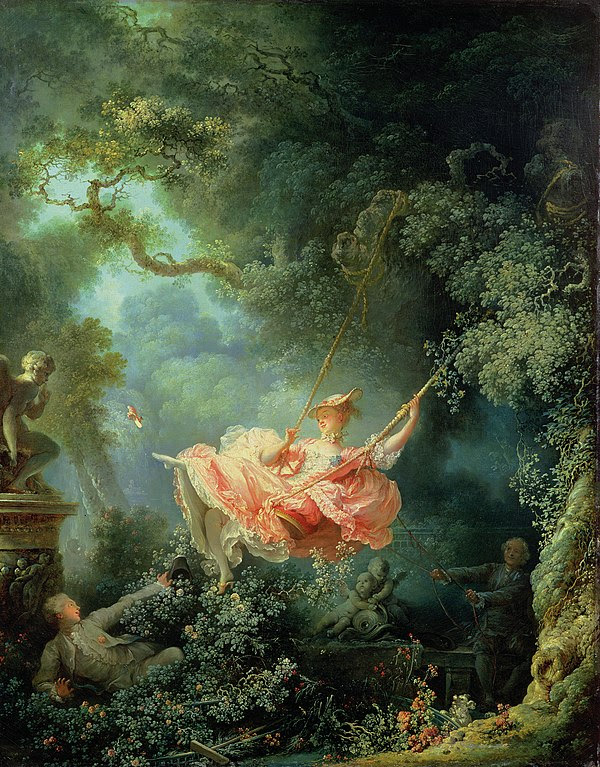 Jean-Honoré Fragonard (1732-1806), known for his decorative pictures, is associated with the late Rococo style. Fragonard abandoned the conventions of the Academy early on, and worked for a private clientele of courtiers and financiers instead. He gained commercial success for his cabinet paintings, which combined Italian Baroque painting and Dutch Golden Age landscapes. Fragonard (and his aristocratic patrons) also loved a good dirty joke, embedding them into his elegantly painted compositions. In The Swing , a woman flings her shoe towards a nearby cupid, while her lover hides in the bushes below, looking up her skirt. Behind her, an older man, perhaps her husband or chaperone, pushes her on the swing, unaware of the scandalous scene in the foreground.

Although I didn't use this site, I did think about it as a possibility for locating qualified authors because it is built exclusively for writers. Additionally, I had to produce top-notch content for my project, including the writing component. I was able to complete my project on time because of https://www.tmcnet.com/topics/articles/2022/02/24/451626-best-essay-wri… , which helped me find a solution. This was my first time prepping for a job like this, so I hope I'll be more creative the next time.

I think the Rococo style was a delightful and pretty period in art. It is most often associated with the reign of Louis XV, who reigned in France from 1723-to 1774. The style is characterized by soft colors, delicate lines and curves, and an abundance of decoration. One of my friends has suggested me https://masterbundles.com/graphics/patterns/leaves/ source to download leaves pattern images for free. The Rococo style was lighter and more graceful than the Baroque because it reflected the tastes of the French court at Versailles.