If you love Percy Jackson and the Olympians as much as I do, you will fall head over heels for Classical Greek Art. Each vase painting, freestanding sculpture, and frieze depicts different scenes or figures from Greek mythology, telling a visual story.  It’s got everything you could ask for in an art historical era: epic stories, aesthetic beauty, cultural significance, and most importantly, nudity.

What we refer to as ‘mythology’ comprised the Hellenic religion for the ancient Greeks. Modern Western society tends to separate the spheres of religion, art, and life. We place art in galleries and museums to be viewed, not worshipped. In religious spaces, we focus on worship and any art tends to be some sort of sacred object or icon. Though we may own some art personally, it isn’t an intrinsic part of our lives, our human experience. For the ancient Greeks, art, religion, and daily life all blended together. 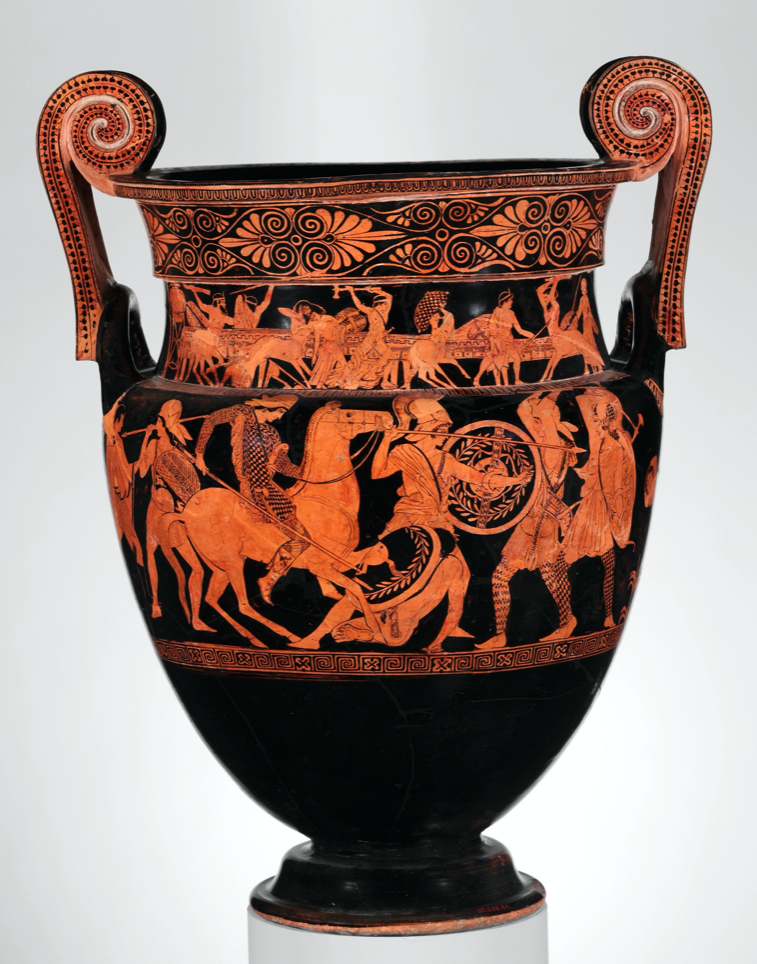 Each god represented a particular aspect of life or nature.  Aphrodite the goddess of love, Athena the goddess of wisdom, Poseidon the god of the sea, Dionysus the god of wine (a testament to how much the Greeks loved to party), Zeus the god of the skies and king of the gods, etc. Ancient Greeks viewed the gods as emotionally disengaged from the human condition while simultaneously actively involved in it by falling in love with humans, waging war against one another, and meddling in mortal life. Even features of the natural environment, like rivers or trees, took on divine powers in the form of minor gods or nymphs. As a result, the religious stories created entertaining tales of gods, heroes, monsters, and natural spirits. Classical Greek Art allows the viewer an insight into the ancient perspective and understanding of their religious beliefs. 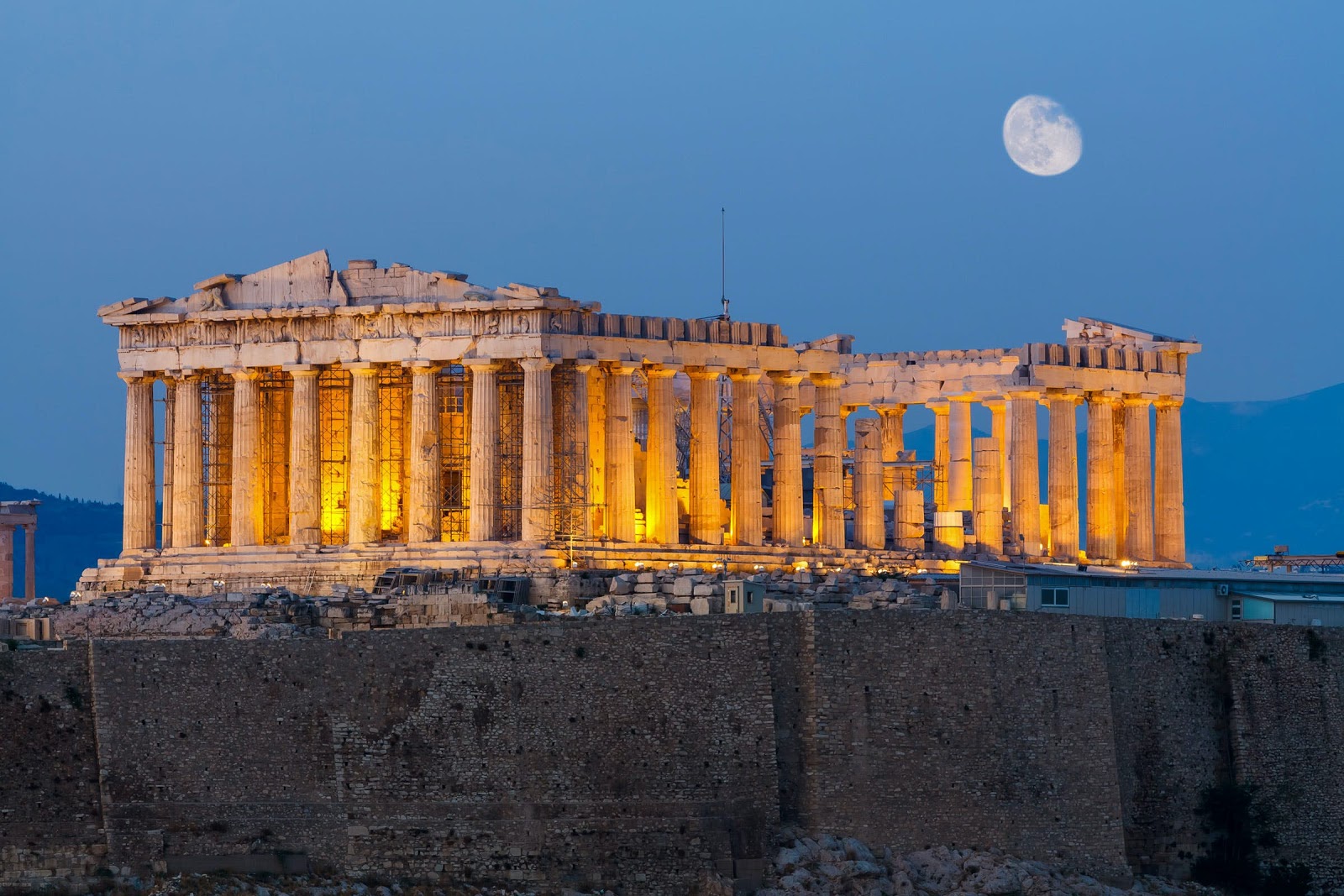 The Classical Era lasted from about 480 - 323 BCE, beginning with the defeat of the Persians and the city of Athens’ domination of Greece. The Greek politician Pericles transformed the Acropolis, where the Parthenon stands, into a monument to the power and cultural importance of Athens.  Most famously the Parthenon featured a frieze, controversially referred to as the Elgin Marbles, that now sits in the British Museum and is deserving of its own blog post. 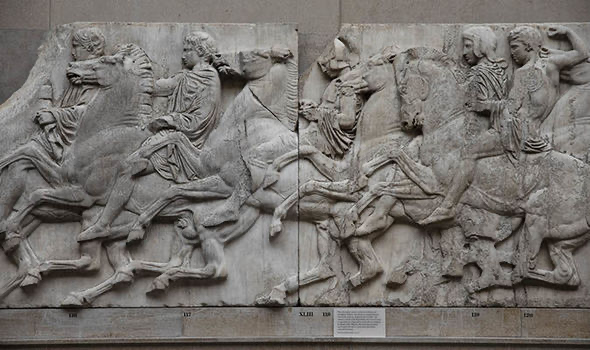 The mid-5th century BCE is often referred to as the Golden Age of Greece in part due to the rich cultural history developed during this period. Attic vase painting using the red-figure technique allowed for increased realism in depicting the human body. The artist Praxiteles sculpted the first nude female, Aphrodite of Knidos, which has become an iconic landmark of Greek art.  He inspired all fraternity boys in Greek life to make “send nudes” their bio on Tinder. 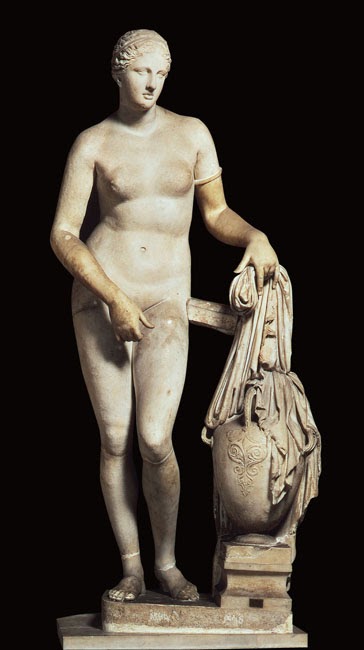 Phidias also created two of the most important statues in Greek art: the Athena Parthenos and Zeus at Olympia. Both were made of gold and ivory, a type of sculpture called chryselephantine, taking the term “Golden Age” very seriously. These cult images were both highly venerated by the Greeks, neither of which exist to this day for mysterious reasons.

The Parthenon originally housed the Athena Parthenos, a 40-foot statue of the goddess, accompanied by miniature sculptures -- and by ‘miniature’ I mean in comparison to Athena, so more like ‘life-sized’ sculptures --  featuring Nike, the goddess of victory, centaurs, Amazons, Medusa, Pegasus, as well as the story of Pandora. Altogether, these images represented the victory of the Greeks over the Persians, shown as the centaurs and Amazons, and the triumph of order over chaos. Some theorize that the Parthenos burned down in a massive fire on the Acropolis, while others believe that Christians removed (ie. stole) it from the Parthenon. 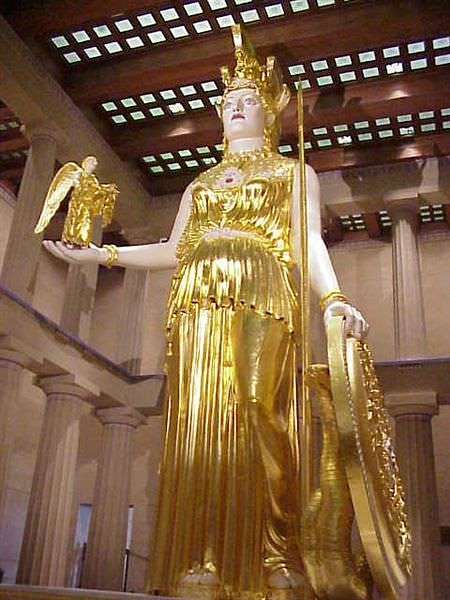 As for the statue of Zeus at Olympia, it’s now known as one of the seven wonders of the ancient world. Like Athens, Olympia was an important cultural center in Classical Greece and served as the original home of the Olympic Games as well.  Unlike today, the main event was an animal sacrifice to Zeus on top of an altar built from the ashes of previously sacrificed animals. Sitting over 43 feet tall, the chryselephantine sculpture of Zeus was likely larger than the Athena Parthenos, though the physical details of this sculpture are less well-known. Neither sculpture survived to the present, so our only sources of knowledge are ancient descriptions of each piece. 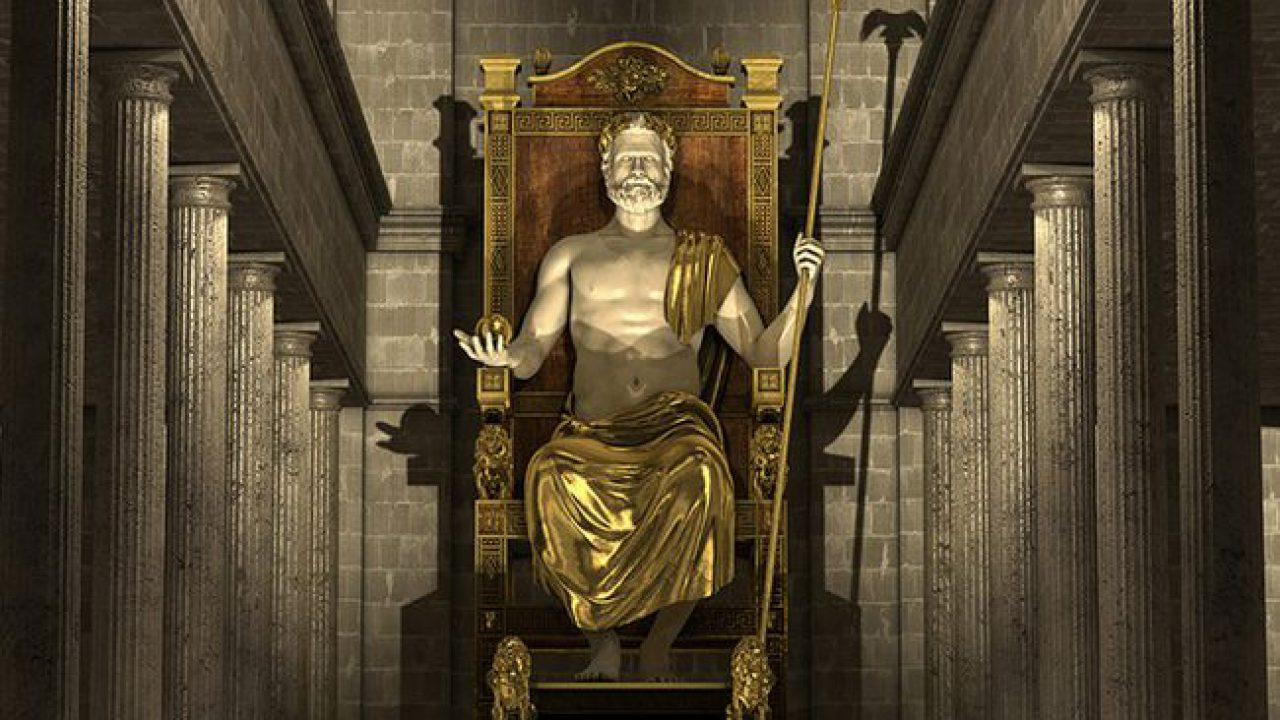 The practice of naturalism, representing things the way we see them, originated in the Classical era. It transformed statues of the gods from the Archaic stiff, hieratic images to deities that interacted with their worshippers.  At temples to the gods, the context of viewing the art heightened the experience, like reflective pools enhancing the aura of the gods, hymns sung at the entrances to temples during festivals, the use of euodia, the fragrance of the gods. People didn’t just go to the temples to look at the statues, they also fed the sculptures sacrifices, clothed them, gave them libations, interacting directly with the deity. Naturalism, in this way, allowed for a deeper manifestation of religion within the culture. Instead of a sculpture being a representation of the deity, a piece the deity themselves existed within the sculpture so that they could be directly communicated with. 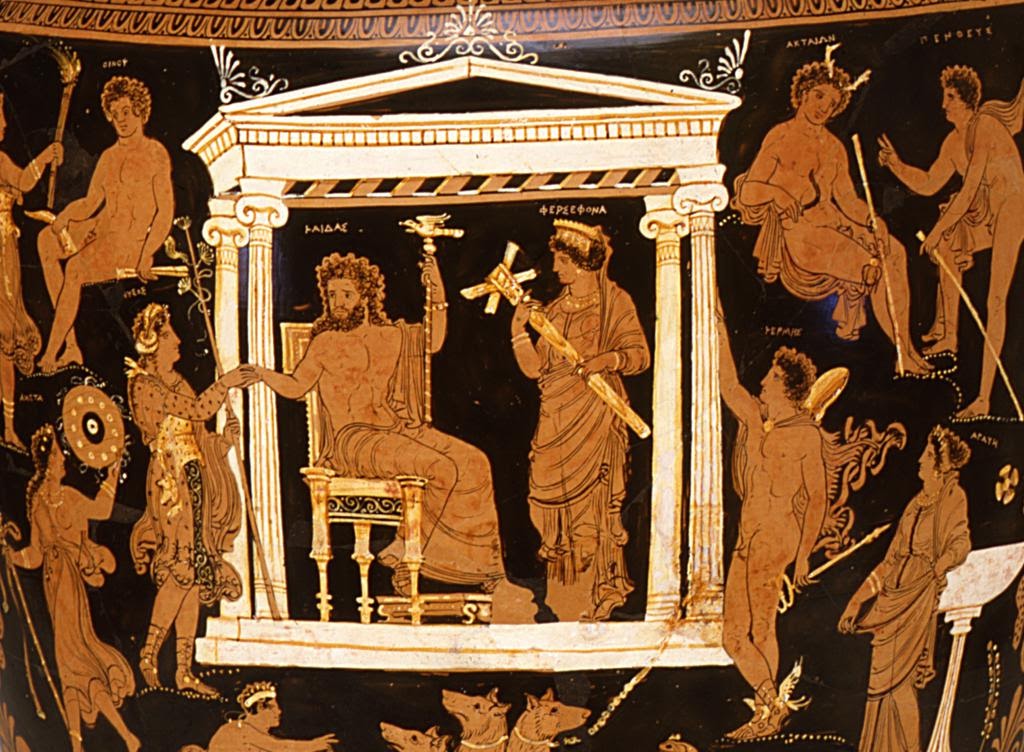 Funerary Vessel with Dionysos in the Underworld (detail), 350 - 325 BCE

One of my personal favorite creatures in Classical Greek Art is the phallos-bird. Essentially, a dick with wings. These flying dicks were associated with female desire, sort of a deviant version of a swan. Art historian John Boardment writes, “The desire to associate [the phallos-bird] with a cock is explained by a misguided wish to find in antiquity a parallel for the two english uses of the word, fowl and penis.” Rather, etymologists derive the term from a water spout (“stop-cock”). Often, vase painters and sculptors depicted the phallos-bird being ridden by a naked woman, or an ithyphallic satyr. There are also many Greek vases featuring orgies, but those are best left to the imagination (or if you really, really want to see it, which you don’t, you can Google it, which you shouldn’t). 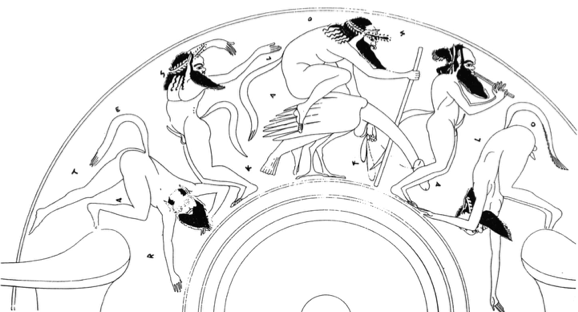 Cup of the Proto-Panaetian Group

A common misconception about classical Greek sculptures is that they were a pure marble white color that now seems to represent all antiquity. However, the sculptures and temples were actually brightly colored. Some ancient statues still have traces of color visible today. Archaeologist Vinzenz Brinkmann created reproductions of Ancient Greek sculptures featuring vivid coloring, thought to be closer to how the Ancient Greeks might’ve seen the artwork in their respective context. 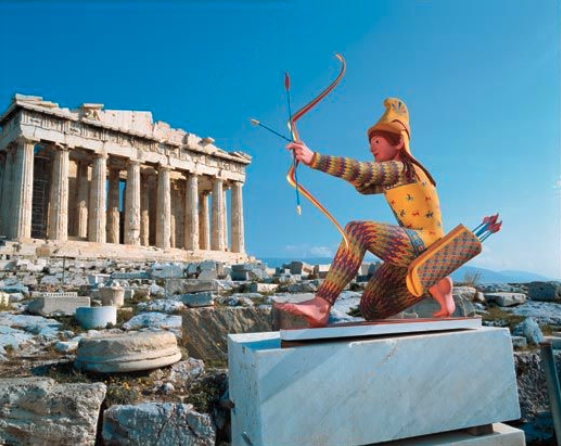 Classical Greek Art not only gave us detailed depictions of mythological stories, but an insight into the relationship between religion, art, and daily life during that period. As a result, its beauty and cultural innovation withstand the test of time, allowing the modern viewer a chance to glimpse the experience of the Ancient Greeks.