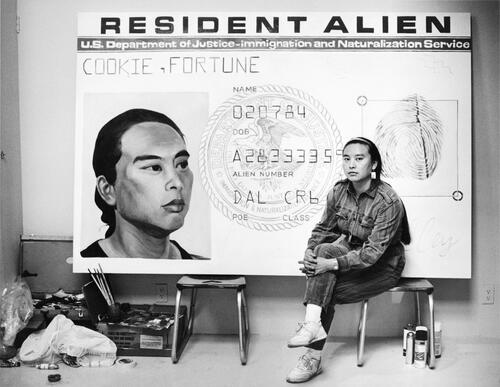 Hung Liu with her work Resident Alien in 1988 (credit)

The world is starting to open up again! Making it official that Covid days are numbered, the de Young Museum had their first in-person gallery opening in eighteen months for the exhibit Hung Liu: Golden Gate (金門). 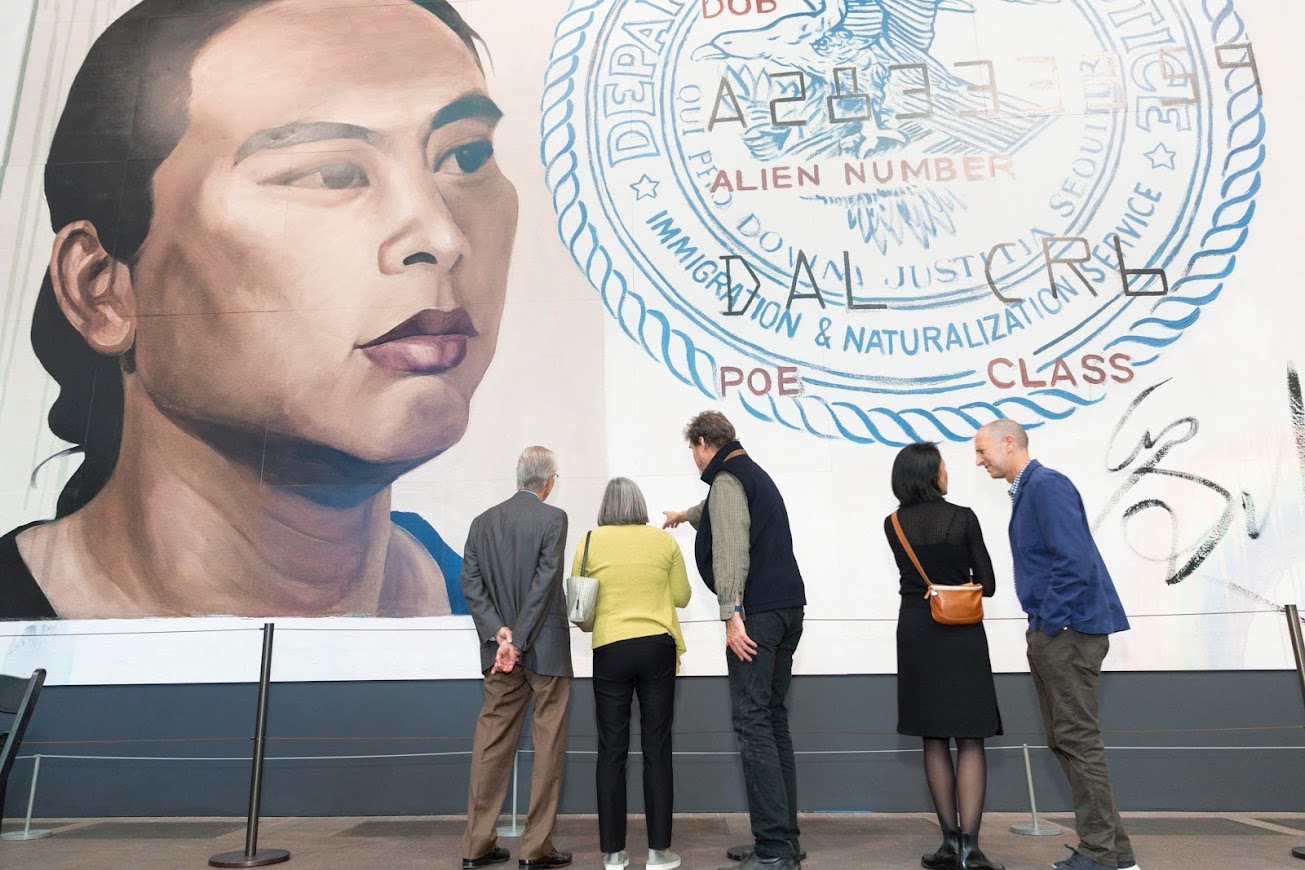 It’s fitting that the de Young’s first in-person opening in so long featured Liu, an artist who has a long history with the museum. Janna Keegan, the  Assistant Curator of Contemporary Art and Programming, introduced Liu by telling a personal story of how she first met Liu. She spoke of how when she first arrived in San Francisco, Liu - who was already a famous artist by then - welcomed her as a friend and helped her fit in. 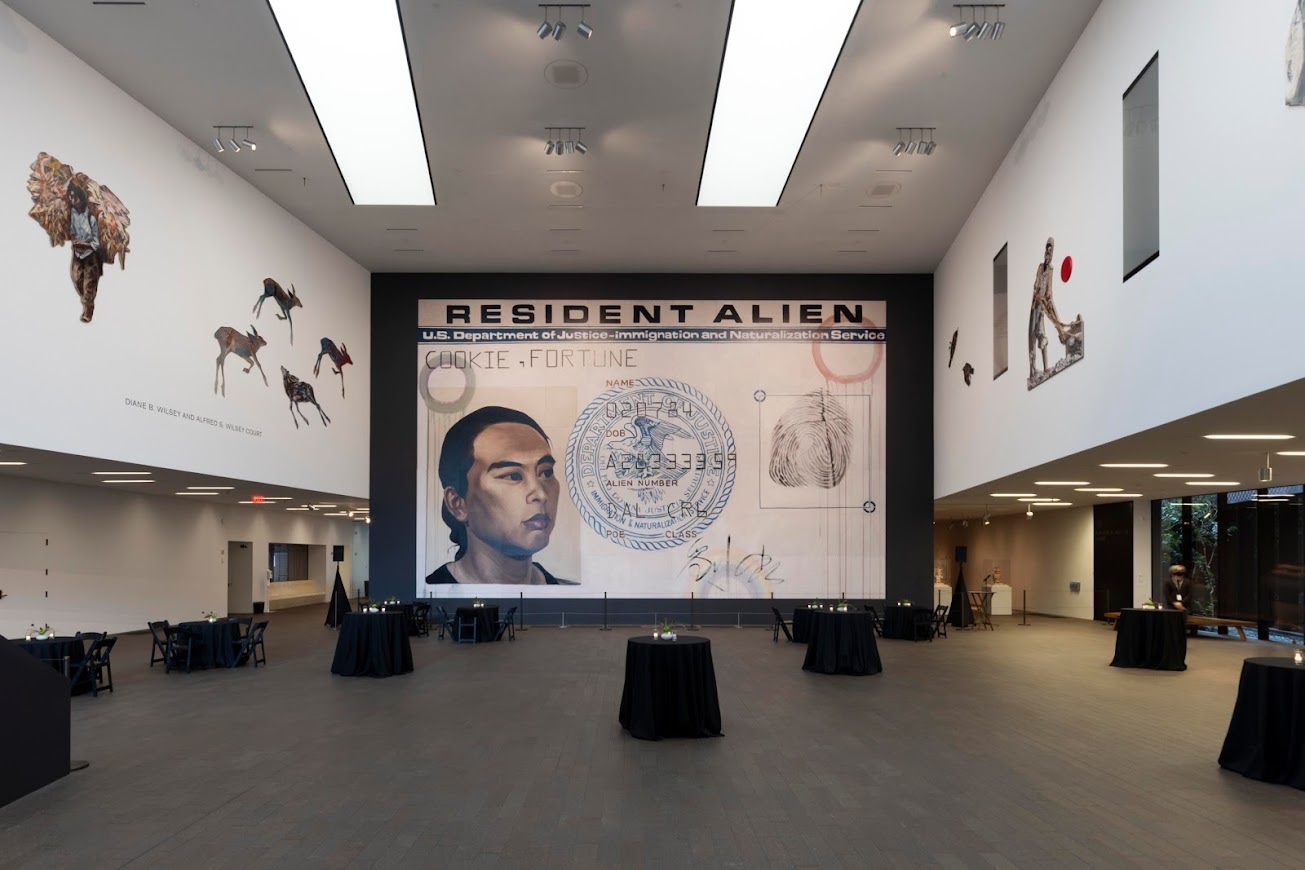 The centerpiece of the gallery is Resident Alien, one of Liu’s most famous works. The original is currently housed at the San Jose Museum of Art, this is a second rendition. The original measures 60” by 90” but the version at de Young was blown up to a far larger scale.

Liu remarked how impressed she was by the museum for how seamlessly they installed all 77 panels of the piece. She went on to speak about her various use of oxymorons in the painting, mostly playing off the strangeness of a green card. The first and most obvious being that the card itself isn’t green.

Next, the word “alien” rang as particularly odd to Liu as she first came to the United States around the time that the Aliens movie franchise was at peak popularity.

Lastly, her signature on the painting reads “Cookie, Fortune”. Liu uses fortune cookies in her work rather often, either as a symbol, theme, or a literal pile of them. Part of why Liu finds them so interesting is that they’re not even Chinese. The fortune cookie actually has its origins in San Francisco, created by a Japanese man to appeal to tourists at the nearby Japanese Tea Garden. 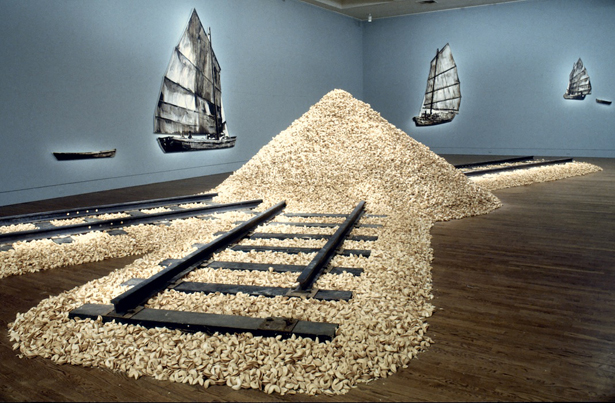 In 1994, Liu exhibited her work Jiu Jin Shan which featured over 200,000 fortune cookies poured over train tracks at the de Young (Jiu Jin Shan is the Chinese word for San Francisco meaning “Old Gold Mountain”). It was a popular exhibit...but not just with humans. Lots of rats paid the museum a visit to nibble on the piece. Liu joked about how no one had considered that the giant pile of food might attract rodents. No chance of such a thing with this current exhibit!

As for the name of the exhibition, Golden Gate, Liu spoke of it as a symbolic bridge that represents her journey of becoming American and how she’s always crossing the bridge.

If you’re interested in seeing the gallery in person, the installation is actually in the free area of the museum so you can check it out before you even grab a general admission ticket. The show is on view until March 13, 2022.