Leonor Fini was an artist of her own self-fashioned Surrealism, known for her bold self-portraits, unconventional even on Surrealist terms. Born in Argentina, her parents separated when she was just a baby and she moved to Trieste, Italy with her mother. The split was not amicable, and she spent the time with her mother dressing her up as a boy after an unsuccessful kidnapping attempt by her father.

She had no formal art training, partially due to her rebellious spirit that got her expelled from multiple schools, but studied independently as a child, reading from her uncle’s library, and exploring art throughout Europe. Being brought up in Italy, she trained in the Renaissance and Mannerist conventions that emphasized proportion, balance, and ideal beauty, but was later fascinated by the Pre-Raphaelites, Gustave Klimt, and 15th century German and Flemish painters. She observed anatomy from visiting the Trieste morgue and observing the cadavers. She experienced rheumatic conjunctivitis as a teen, and was forced to wear bandages over both her eyes for several months. She credited this period of living in the dark for giving her the opportunity to form and visualize elaborate images in her imagination. 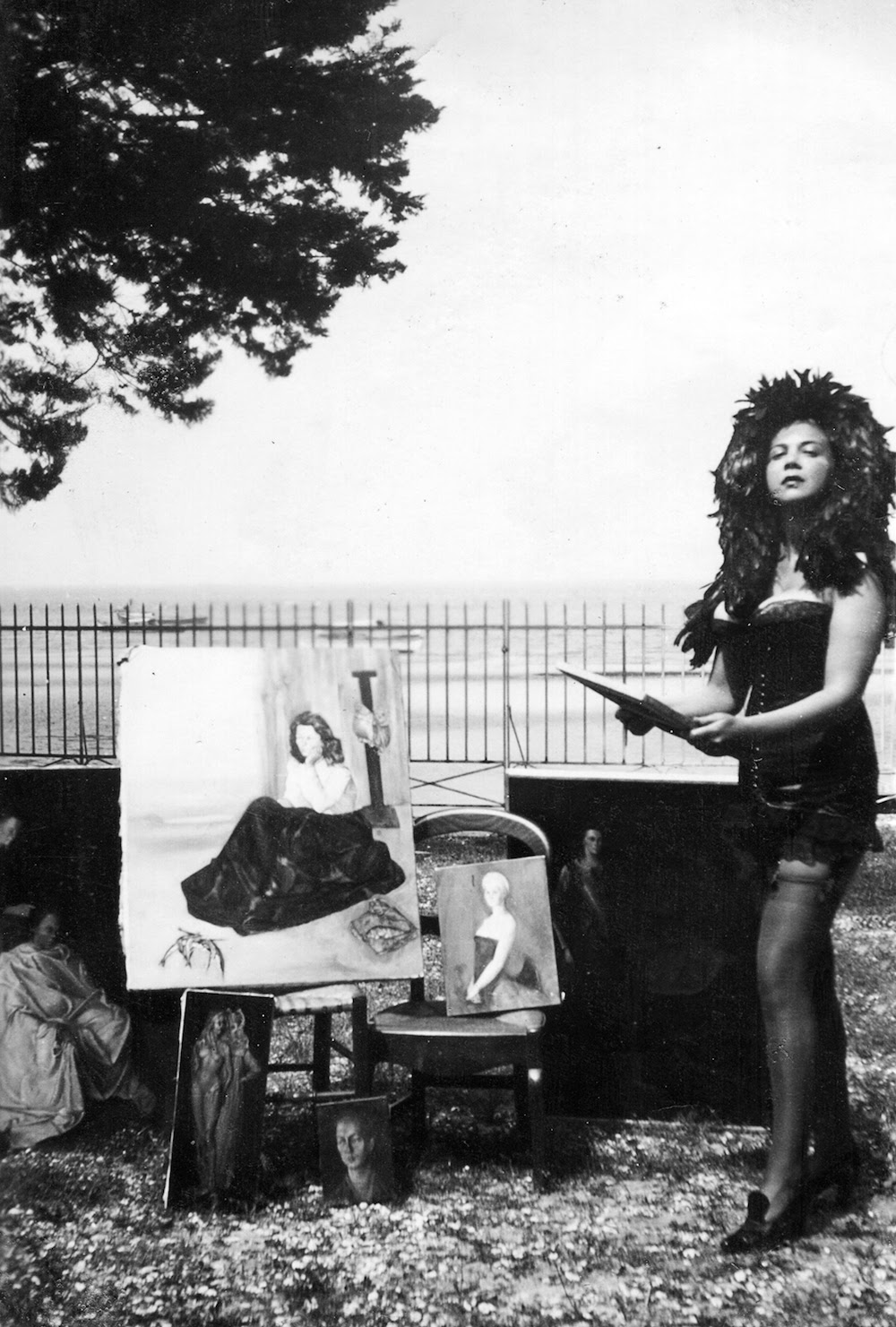 She arrived in Paris in 1931, only 24, and quickly became associated with the Surrealists, though never considering herself as one since the leader Andre Breton held the misogynistic view that the role of the woman was as the muse and not the artist rubbed her the wrong way. Like the Surrealists, her work was inspired by the unconscious mind, however she broke from femme fatale depictions of women as symbols of the erotic and creative. Her paintings explored the power dynamic between men and women by inverting the canon. Instead painting passive women, she painted them in positions of power and the men as passive and androgynous. 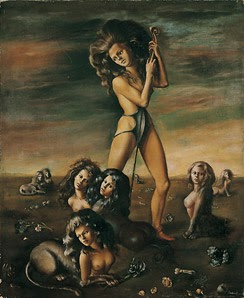 Leonor Fini, Shepherdess over the Sphinxes, 1941.

One of the symbols she inverted was the sphinx. The sphinx was a fixed feature in her paintings, as in the works of other Surrealist artists. For Breton, the sphinx was part of his master-muse fantasy where the master was the male artist and the muse was a perpetually elusive woman, represented by the sphinx. Other Surrealists, like Ernst and Dali, took the Freudian interpretation of the sphinx. In Greek mythology, the sphinx guarded city of Thebes, asking a riddle to allow travelers entry until she is met by Oedipus, who best her by correctly answering the riddle, and in turn, she throws herself off a rock. In this interpretation, the sphinx, which is both male and female, is a representation of forbidden sexuality.

Fini instead embraces the Egyptian sphinx, which guards the pyramids, a king rather than a problematic riddle. She is androgynous and benevolent, empowered by nature but also poised against civilization and violence. It is this sphinx that she imagines a powerful woman ruling over sphinxes with female heads. Shepherdess Ruling Over the Sphinxes in 1941. It is a piece about reidentification and an exercise of powers that have been lost by the contemporary woman. This painting was bought by Peggy Guggenheim in 1942 and exhibited in her Art of this Century Gallery and then again in An Exhibition by 31 Women in 1943.

This was partially due to Ernst, who was married to Guggenheim at the time, and his adoration of her work. He describes her style as “full of vertigo” and this piece in particular as “Miraculous plays of darkness and light are given ultimate expression in the pulsating pearly colors of this chimerical flesh, that resembles the bifid love-making of sphinxes.” Guggenheim was jealous of Fini and Ernst’s prior relationship, but could not deny her artistic genius. 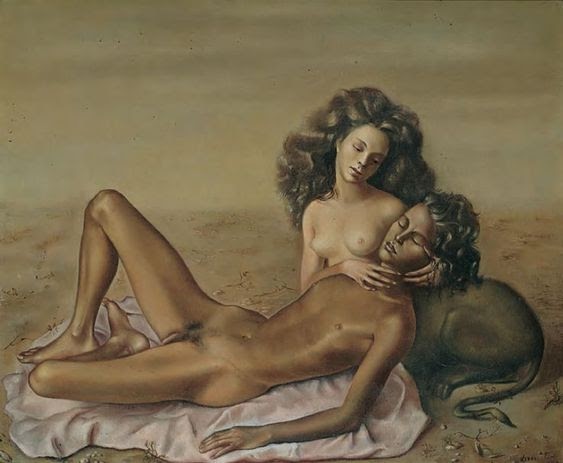 In another piece, Sphinx Amalburga, Fini imagines herself as a sphinx. The sphinx here is a powerful woman, a self-portrait with Fini’s head over a sphinx body. In her arms lies a nude male. This flipped the patriarchal Surrealist trope of powerful men and passive women. In her representations of the sphinx, she simultaneously plays into Surrealist imagery and questions them.She also represented male bodies in an unconventional way, emphasizing feminine qualities and celebrating androgyny towards the start of her career, eventually evolving into darker tones and a dreamlike style along with the rest of her work while still maintaining the eroticism. Her eroticism made her a polarizing figure, adored by the art and fashion crowd but outraging others. In 1936, the Daily Mail spoke of her two works that were in the International Surrealist Exposition of that year that were, at least for her, mildly erotic, saying they were “a couple of slaps on the face of decency that should not be allowed to pass unnoticed.”

Fini was so dynamic. Her art expanded beyond the confines of flat paintings, working in mediums from costumes to book illustrations to furniture. She created designs for the Paris Opera, the Metropolitan Opera, the movie 8½ by Frederico Finelli, and Bridgette Bardot’s gown for the Rothschilds’ Ball. She illustrated Marquis de Sade’s Juliette and the Sadean novel Histoire d’O. The female form was also present in her designs, including the bottle of Elsa Schaperelli’s perfume “Shocking” which was shaped like a torso and a corset-shaped chair. Her love of cats flowed from the allegorical through the sphinxes in her paintings to the everyday through her 17 Persian cats that slept in her bed and ate at her dining room table. As much a socialite as she was an artist, she was known as the Queen of Paris, attending balls and making headlines for her ostentatious outfits. Known for her theatricality, her life was like a performance art piece, recorded by writer Jean Genet in his poetry and novels. 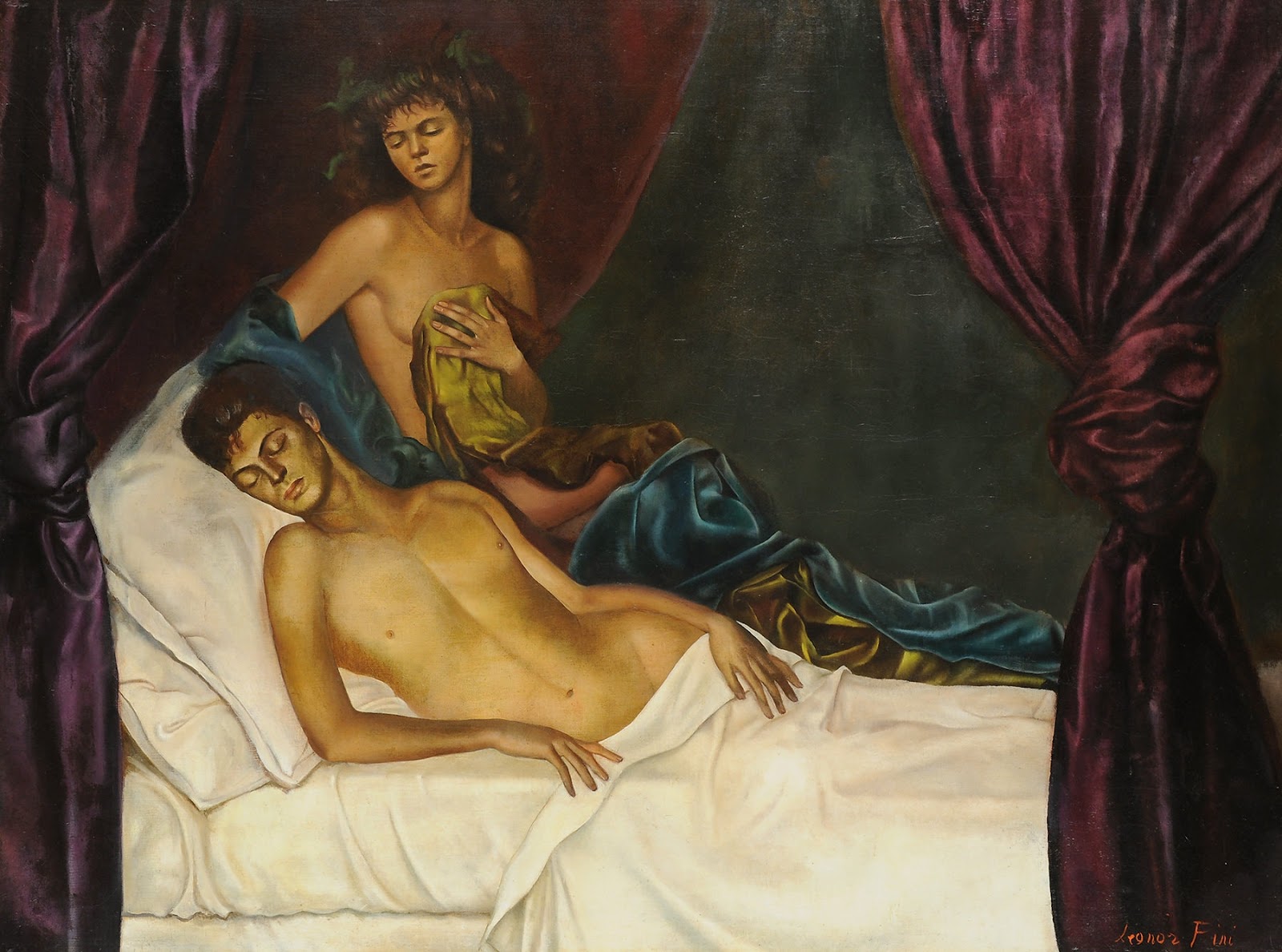 Though she was recognized for her eccentrics and theatricality during her life, her work, as of late, has been sliding into obscurity, maybe due to her refusal to accept the Surrealist label and its male-dominated narrative. Her bohemian lifestyle of eccentricity and open sexuality has diverted attention away from her art. However, she, and the work of other female Surrealists like Marja Mallo, have recently come into the female consciousness. Her legacy has finally received her due from recent exhibitions at the Museum of Sex’s exhibition, Leonor Fini: Theatre of Desire and an ode in Dior’s 2018 couture collection which featured designs inspired by her party attire of feathers and boots. 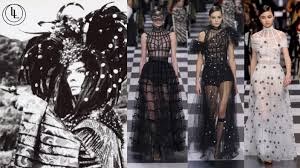 having read this I thought it was very informative