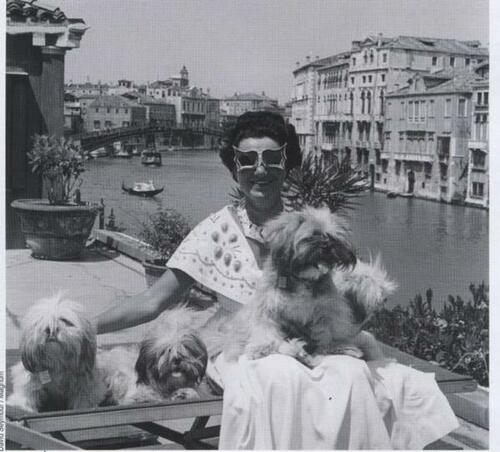 Is there a name more iconic than Guggenheim? Most of us are likely familiar with the prestigious Solomon R. Guggenheim in New York City, but what you may not have known is that Solomon’s private collection-turned-public museum gave way to outposts in various other parts of the world: Abu Dhabi, Bilbao, and the modest (but no less breathtaking) Peggy Guggenheim Collection of Venice, Italy. 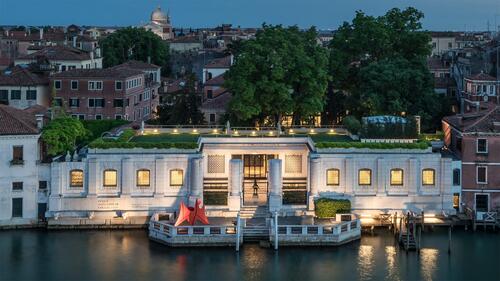 Called the Mistress of Modernism for her dedication to modern art, Peggy Guggenheim was Solomon's rather rebellious and independent niece who gave up a "promising" career as a housewife to forge her own path and pursue a passion for art and culture. As soon as she was old enough to receive her inheritance, this path drew her from New York to Europe where she landed smack dab in the middle of the bohemian art scene of the of the 1920s and 30s. Now, she's remembered as one of the most influential art collectors of the 20th century, while the Venetian Palazzo that was once her home preserves her stunning collection and legacy.

Today is Peggy's birthday, and in honor of a very inspiring lady, we're here to give you the top four reasons that Peggy Guggenheim is a total boss, the real MVP, and just flat out amazing.

1. She stood with the underdogs

Peggy was the world's greatest talent scout. Not only did she collect the art that was being made all around her, which there was absolutely no market for at the time, but she also funded and promoted it—often when the artists were still nobodies. She saw a Duchamp, Pollock, or Calder and knew that she would one day be saying "I knew them when..." Others saw this work and immediately deemed it unworthy of a second glance. I think we can safely say that the haters were wrong.

In her galleries, Peggy gave Jackson Pollock, Vassily Kandinsky, and Mark Rothko (among others) their first shows. If that's not impressive enough, she's also credited with actually discovering Jackson Pollock while he was working as a carpenter at her uncle's museum (The Guggenheim in NY). To be fair, she didn't initially think that he was worth her time but ultimately decided to support the budding artist with a monthly stipend so that he could produce work without worrying about money. She also commissioned a Mural from him to hang in her New York apartment—the largest painting Pollock ever produced. 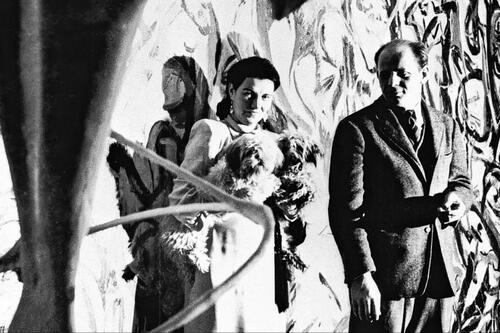 Peggy, her pups, and Jackson Pollock in front of his Mural

2. She founded not one, not two, but three art galleries (and a museum...kind of)

Peggy began collecting relatively late in life, at age 39, and began plans for a contemporary art gallery in London shortly thereafter—Guggenheim Jeune. Although it was tremendously successful, she eventually grew bored of this project and closed it after only two years or so to pursue bigger and better things. She immediately began plans for an entire museum in England, but it unfortunately never came to fruition, because of that whole WWII thing

Her second project was her 1942 New York art gallery, Art of This Century. It was here that she exhibited Surrealist work as well as Pollock, Rothko, Clyfford Still, and many other artists from the growing American Abstract Expressionist movement. 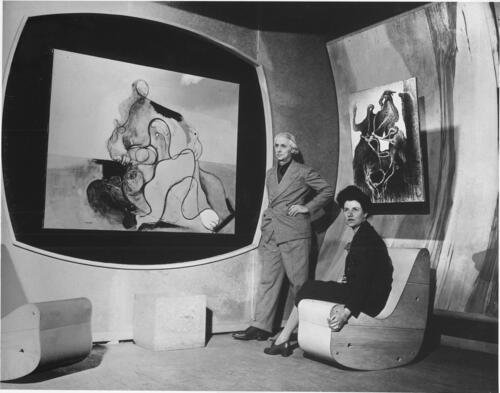 Peggy Guggenheim with Max Ernst inside of Art of This Century with Ernst's piece, The Kiss. 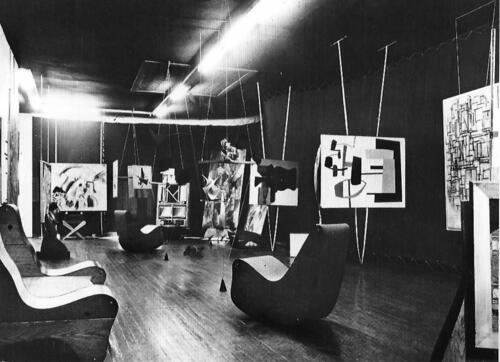 Peggy went all out for this gallery. She created a space completely unlike anything that anyone had seen before with its curving walls, weird furniture, and paintings suspended in mid air. The Abstract Gallery was painted floor-to-ceiling bright blue; the Surrealist Gallery (pictured above) would be periodically plunged into total darkness while the sound of an incoming train played ominously in the distance; the Kinetic Gallery was decorated like a carnival fun house with peep holes and small ferris wheels displaying the artwork. Someone please invent time travel so that I can go experience this. It's too much. 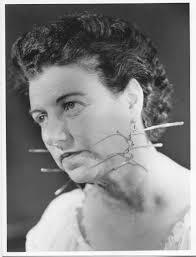 On the opening night of Art of This Century, Peggy wore two earrings: one that had been made for her by Alexander Calder (pictured above) and the other by Yves Tanguy (pictured below), signaling her impartiality between Abstract and Surrealist art. She loved them both too much to choose. 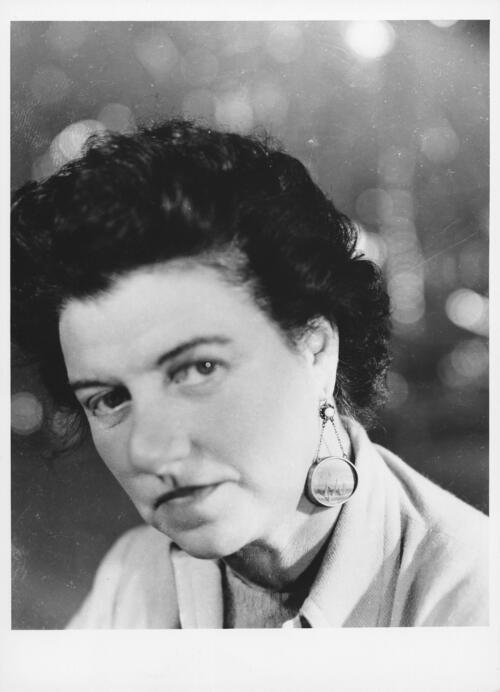 Her third project and final project was the Peggy Guggenheim Collection. After she got bored in New York, Peggy relocated to Venice where she casually bought a Venetian Palazzo—Palazzo Venier de Leoni—to house her expansive collection. She opened it up a few times a week for the general public, and after her death it was transformed into a public museum. 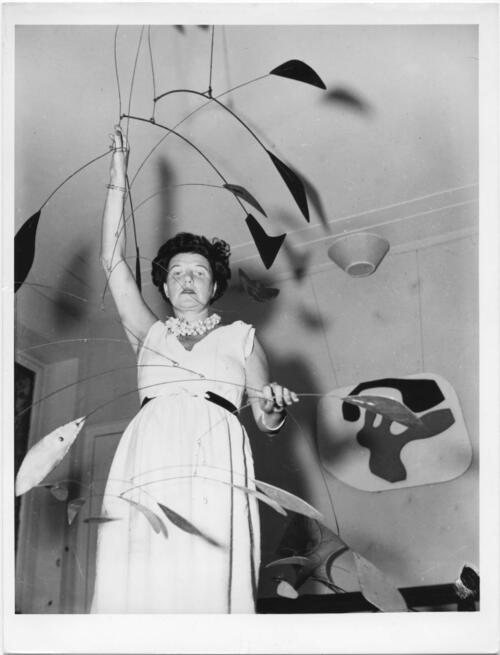 Peggy inside Palazzo Venier de Leoni, holding a Calder mobile and standing in front of a Jean Arp.

3. She safeguarded art through WWII

You know all that so-called degenerate art that Hitler went around destroying? Peggy did exactly the opposite. While she was still planning her museum in London, she set out for Paris with the intention of buying "a picture a day." And she did exactly that. Many of her finds came from artists themselves, collectors, dealers and, and friends, all of whom offered her very low prices because of the imminent threat of German invasion made them want to GTFO of Europe.

Once things became a little too dicey (especially considering her Jewish heritage), Peggy abandoned plans for the museum in favor of getting her booty over to America where she would be safe. Now faced with the problem of how to get her (at this point huge) collection safely hidden and transported to the States, she looked to the Louvre for storage. They turned her away, remarkably stating that her artworks were "too recent" and "not worth saving." She ended up hiding her collection in a barn in the south of France before shipping it to America in crates labeled "household goods." Brilliant and sneaky, I like it.

Not only did she preserve all of this art, but she also helped some very important artists find safe passage to New York, most notably André Breton and Max Ernst.

4. She collected art, lovers, and dogs 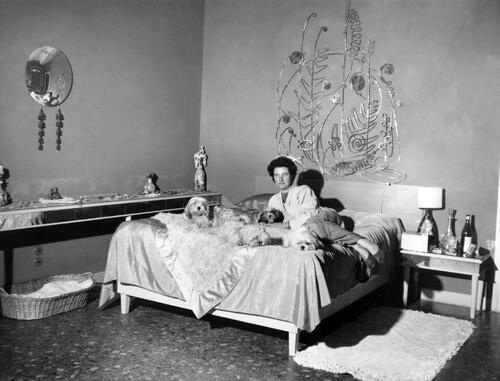 Peggy was famously promiscuous. In her autobiography, she recounts a time in Pompeii when she saw frescos of people making love in various positions, about which she thought, “and of course I was very curious and wanted to try them all out myself.”

It's no secret that the woman got around, frequently striking up love affairs with the artists in the various circles she was apart of. Peggy felt that sleeping around the way that men did made her feel more liberated than anything else. What did I tell you? Boss.

Peggy died of a stroke in 1979 and her ashes were buried in the garden attached to her palazzo, right next to those who she loved most—not her many lovers or husbands, but her fourteen Lhasa Apsos. It would seem that these dogs were the true loves of her life. And she wouldn't have it any other way. 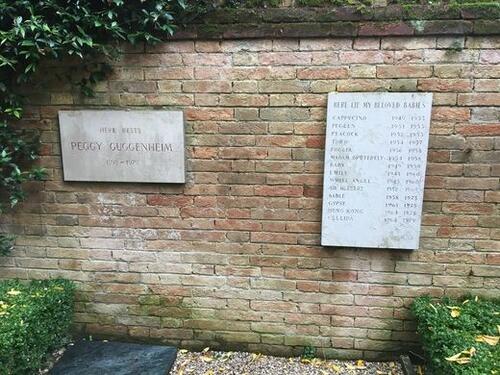 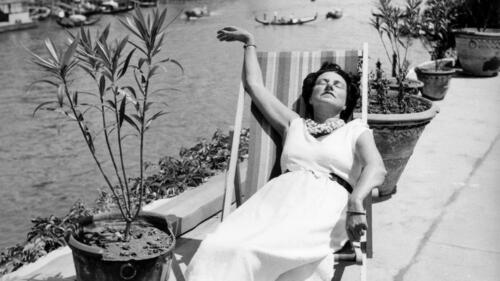