How much do you know about Rococo Art? Take our quiz! 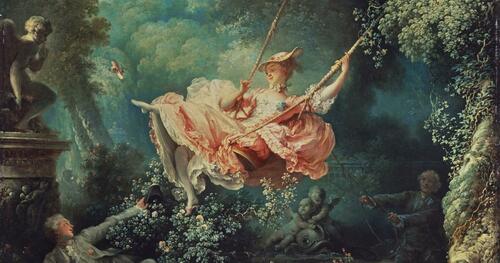 If Baroque art and a can of whipped cream had a baby, it would be the Rococo. Playful and luxurious, the Rococo movement grew out of the Baroque and began flourishing on the European continent in the 1730s. It borrowed many design elements of the Baroque, such as ornate interior gilding and intricate detailing, but took the opulence and glam to extreme levels. Dumping the high emotions and religious drama of the previous period, the Rococo favored something altogether more sensual, airy, and whimsical. If Baroque art were a rich chocolate torte, Rococo would be a cream puff or meringue, light and sweet.

The word “Rococo” comes from the word “rocaille,” which is French for rubble or rock. It refers to tiny shells embedded in rocks to decorate garden grottoes. And indeed, this movement was as much a decorative one as an artistic one, having as much influence on furnishings and interior design as it did on painting. Rococo interiors are notable for elegant and exuberant scrollwork in the ceilings, walls, and molding, often in gold against a white or cream backdrop. This scrollwork is made of curves upon curves, often containing flowers and shells, and even asymmetrical motifs, something quite innovative at the time that would end up influencing later movements like Futurism. These luxurious Rococo interiors could be found in more intimate spaces, like boudoirs, bedrooms, salons and sitting rooms, and formed in part as a reaction against the stiffness of the grand rooms of the Baroque. Check out Marie Antoinette’s bedchamber or the Kaisersaal of the Würzburg Residence in Germany for examples.

Many of the paintings produced during this time reflect that same desire for intimacy. Rather than dramatic scenes of saints with their eyes rolled back, Rococo largely favored genre scenes of wealthy people frolicking about in gardens. Known as the “fête galante”, such images depict scenes of courtship, with beautiful young lovers playing music and enjoying each other’s company in lush, natural, sometimes even melancholic, settings. Artists also produced interior scenes of men and women engaging in romantic rendezvous and forbidden pleasures. This was the age of libertinage, after all, and much of the period’s art revels in that sensuality. Mythical and allegorical scenes were also quite popular, but these, too, were treated in a light and airy way, flirtatious, seductive, and invariably pastel-colored. While lacking the drama of the Baroque, there is nevertheless a sense of theatricality to Rococo images, possibly connected to the popularity of the Commedia dell’arte and other forms of theatre.

Rococo art was produced during the Age of Enlightenment, a philosophical and scientific movement that had its roots in the Humanism of the Renaissance. The Enlightenment encompassed a range of new ways of thinking about the world. Chief among these new ideas was that reason should reign supreme and that knowledge could only be gained through the use of the senses. This kind of thinking would clearly have repercussions, and organized religion and monarchies soon found themselves under attack as thinkers embraced personal liberty, egalitarianism, constitutional government, and the separation of Church and State. The study of nature and science became increasingly rigorous as intellectual societies devoted to it sprang up alongside other salons for literature and the arts. Scientific discoveries regarding everything from optics and chemistry to physics and astronomy had a profound effect on the way the West understood the world, and that worldview was further altered by knowledge gained from explorers and colonists and their voyages around the globe. Rococo art reflected this interest in nature in its abundance of floral imagery, and global cultural influence can be discerned in the increasing incorporation of East Asian design motifs into European design. Archeological discoveries closer to home, like the buried cities of Herculaneum and Pompeii in Italy, had a profound effect on Europe’s imagination, and led to a renewed interest in ancient Roman visual culture.

Sometimes it seems odd that the Age of Reason should beget such lighthearted art, but intense intellectual changes were also bringing about changes in morality and priorities, especially among the privileged classes. As the 18th century wore on, however, philosophers like Voltaire and Diderot criticized Rococo art for being indecent, immoral, and no longer relevant in an age of increasingly serious concerns. A sober version of the classical forms of ancient Greece and Rome began to be considered the most effective way to give visual expression to Enlightenment ideals of democracy, fraternity, and rationality, and as the 18th century wore on, Rococo art bled into the Neoclassical.

Art history is the study of objects and visual media in past cultures, as well as their context and social significance. Art historians use art criticism to understand a work of art and the artist who created it, but the discipline has since expanded to include other forms of visual culture such as design, fashion, film, architecture, performance art, and photography. Students can just click here now to learn why learning art history is important. The history of art is a very broad subject, which has a lot of different aspects. It is important to understand these different aspects in order to really appreciate art and appreciate what artists are trying to do.