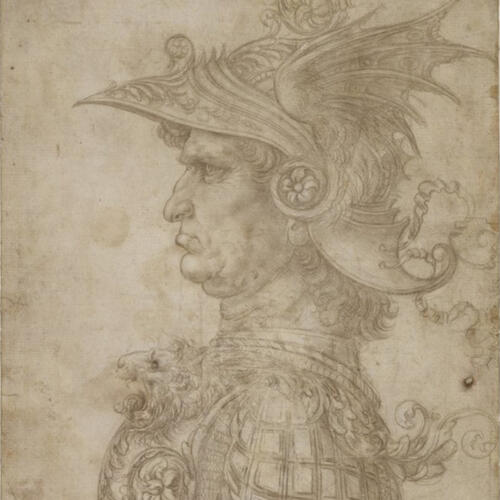 If you’ve ever carried something cumbersome and metal in a narrow space (say, an aluminum ladder or a bed frame) and, despite your repeated shouts to “PIVOT” you ended up scuffing up the painted wall, you might be surprised to learn that you didn’t just give up the rights to your security deposit that day. You also practiced the ancient art of metalpoint drawing.

Metalpoint is a drawing technique in which a piece of metal is used to make marks on a surface that has some tooth, just like that bed frame on the slightly gritty paint. Silver is the most commonly used drawing tool for this technique, however other metals, including lead, gold, copper, etc. may also be used. The term metalpoint describes the overarching use of drawing with metal of any kind, while silverpoint refers to metalpoint drawings made using silver.

Metalpoint can be traced all the way back to antiquity, but it is most commonly associated with the Renaissance, when it reached its peak of popularity and was used by artists such as Leonardo da Vinci, Albrecht Dürer, Jan Van Eyck, and Hans Holbein (both the Elder and Younger). In “The Craftsman’s Handbook” (“Il Libro dell’ Arte”), Cennino Cennini instructs 15th century aspiring artists to grind burned bones for two hours, then mix the ground bone ash with saliva and apply it to a wooden panel. Then, he says, “take a style of silver, fairly slender, smooth, and handsome. Then, using a model, start to copy the easiest possible subjects, to get your hand in; and run the style over the little panel so lightly that you can hardly make out what you first start to do; strengthening your strokes little by little, going back many times to produce the shadows.”

As you might imagine, 15th century metalpoint was a rather involved process. Easier-to-use drawing materials became available in the 17th century, and metalpoint subsequently began to fall out of favor. It mostly disappeared until the Victorians came along with their penchant for the unusual and arcane. Their interest in Italian Renaissance and academic artistic styles paved the way for a metalpoint revival in late 19th century England, pioneered by artists such as Alphonse Legros, William Strang, and Charles Prosper Stainton. Commercially prepared papers for metalpoint became available and made the medium more accessible than ever. America also experienced a similar renewed interest in metalpoint around this time.

Modernism marched on. Marsden Hartley used silverpoint as a preliminary sketching medium for planning paintings, while German social realist painter Otto Dix made over 200 silverpoint drawings, creating many of them while in exile from the Nazis with his family in the German countryside. Joseph Stella created a body of silverpoint work focused on portraits, plants, and flowers, and Jasper Johns made a small series of metalpoints in the 1980s.

Today, metalpoint is experiencing something of another revival. A small but solid selection of ready-made silverpoint tools, papers, and grounds from major art suppliers such as Sinopia, Legion, Natural Pigments, and Golden are a far cry from Cennini’s layers of bone ash, ground for hours and then spit upon. The major metalpoint survey Drawing in Silver and Gold: Leonardo to Jasper Johns at the British Museum in 2015, and recent books such as "Silverpoint and Metalpoint Drawing: A Complete Guide to the Medium" by Susan Schwalb and Tom Mazzulo, have enriched metalpoint scholarship and education.

Contemporary metalpoint artists also contribute to the medium. Many artists harken back to the medium’s Renaissance glory days by working representationally, such as Leo J. Dee, Aj Smith, Marjorie Williams-Smith, Tom Mazzulo, and Cynthia Lin. Others eschew realism in favor of abstraction, such as Susan Schwalb, Lucie Beppler, and Marietta Hoferer. Shirazeh Houshiary uses metalpoint in a series of text works that depict delicately rendered words and phrases expressing Sufi thought in a series of large-scale canvases. Some contemporary artists ditch the traditional stylus and ground completely. Linda Hutchins makes drawings with thimbles and silver spoons. Nathalie Loveless uses the medium in performances, such as in a 2009 work where she sought (and enacted) advice for how she should behave in front of a wall: kissing it, throwing things at it, etc. She then drew metalpoint lines around each image. Artist Erika Winstone combines video projections with fine silverpoint lines, such as in her work The Rink and the Talent Show. Ram Samocha draws on prepared papers over and over with silverpoint until the stress of the repeated marks causes the paper to take on sculptural forms.

Then again, there’s also your hallway; its “Landlord Special” beige paint now scuffed with your move-in day metalpoint. Maybe a small history lesson on the Renaissance would help smooth things over, or at least get you into the next metalpoint survey at the British museum?

I enjoy reading more about this form of art. When I first heard of silverpoint, this is not what I thought at all. I love that all of the other metals do something different when drawing. I also find it interesting that you can find different things to draw with as you can draw with a key or a coin.

It is amazing hols detailed the artist can get with metal point. I wonder how Albrecht Dürer did a Self-Portrait of himself at thirteen. I can understand why people would boast about their skill with metal point. It is hard for me to draw with pens without making a mistake. It is also amazing that this medium and artwork have survived for so long.
Understanding mediums are so, important, but if you understand the medium, you can know what you can do and what you can't; as well as know-how to shade and possibly had texture.

This is such an interesting form of art! I always think of art in paint or pencil form, so learning about different tools that can be used to create such intricate and detailed work or large scaled pictures is very cool!

I never even new metal point existed until recently. I find it fascinating the range of metals that can be used and have been used throughout history; especially gold! Even though gold is so expensive, perhaps it really is worth it's price since it lasts for so many years. I really hope people can find a new passion for this ancient art method!

This is awesome. I may need to take up metal point or moving furniture.