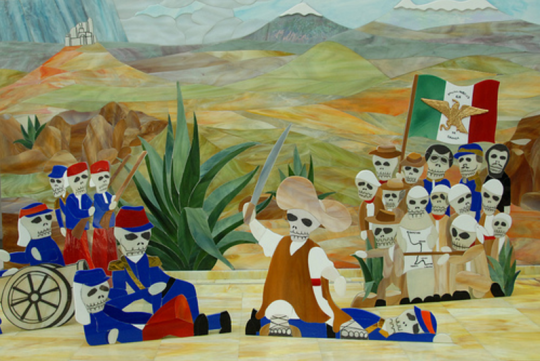 The day that is NOT Mexican Independence Day and IS the celebration of the Mexican Army’s 1862 defeat of the French in the Battle of Puebla. It IS a day to celebrate Mexican and Mexican American culture by learning about the history, literature, art, food, and, naturally, drink of this glorious people. It is NOT an excuse to perpetuate racist stereotypes so please only partake in said drink if you can keep your Speedy Gonzales imitation to yourself after a few rounds.

Previously we have aided in your tequila drinking and art loving by bringing you Frida Kahlo inspired drinks. While we will always adore Kahlo and her famous artist husband Diego Rivera, wouldn’t it be nice on a day meant to celebrate Mexican culture to raise our Kahlo shot glasses salted from our Kahlo + Rivera salt shakers to some of the other influential Mexican artists in the world? With this goal in mind today we bring you just three, of what we assure you are many, amazing male Mexican artists who are NOT Diego Rivera.

Why no ladies? We wanted to give them their own rightfully deserved blog so stay tuned to Sartle to learn about the spectacular surrealists and powerful portraitists who are not Kahlo.

With a single work Jose Guadalupe Posada has arguably held more influence over Mexican art within the past 100 years than any other artist. 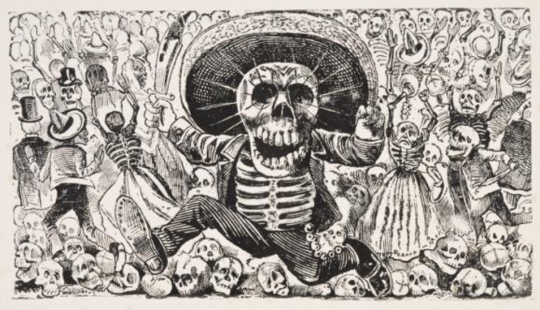 Considered the father of Mexican satirical printmaking, Posada worked tirelessly throughout his career from 1868-1913 creating lithographs, engravings, and wood blocks that depicted both natural and political events faced by Mexico’s working poor. Through these cheaply produced graphic illustrations printed on pamphlets and newspapers Posada sought to provide accessible news and entertainment to keep even the illiterate members of Mexican society informed. His work, but not his name, reached the masses and he died largely unrecognized in 1913, buried a pauper in a 6th class grave in Mexico City’s Dolores Cemetery where seven years later his unclaimed remains were discarded.

Posada’s name is still not well known outside of Mexico, a sad circumstance when considering that he is responsible for creating this: 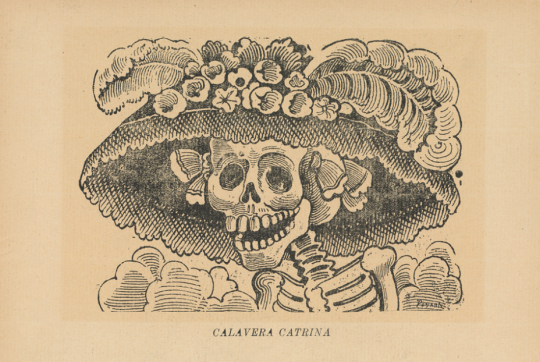 The lovely lady above was deemed La Calavera Garbancera by Posada but thanks to Diego Rivera is now known commonly as La Calvera Catrina and is the uncited source of every Dia de Los Muertos costume you’ve ever seen. In the original title, “garbancera” refers to a term used in Posada’s time to describe indigenous Mexicans who tried to downplay their heritage by embracing the European styles of the upper-class, with “calavera,” which translates to “skull,” representing a skeleton character popular in folkloric Mexican art. While Calaveras have long existed in Mexico, it was Posada who is credited for providing the finery featured in modern renderings of the character. The Calavera reference Mexican culture’s strong link between the living and the dead dating back to Pre-Colombian traditions honoring the Aztec goddess of death, Mictecacihuatl. 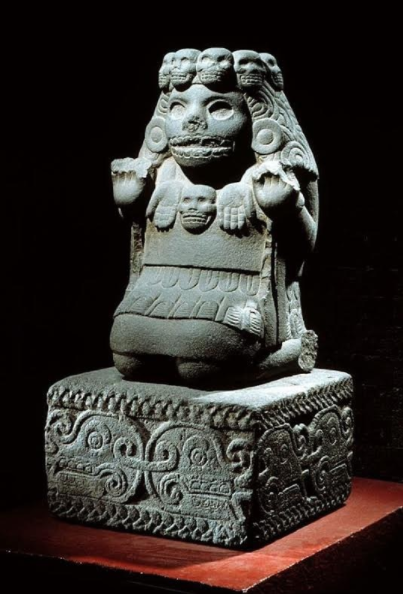 Mictecacihuatl guards the bones of the dead in the underworld where she reigns as Queen.

La Calvera Catrina received her new name and new fame 34 years after Posada’s death and 37 years after her inception when Diego “The Frog Prince” Rivera included her in his famed 1947 mural Sueño de una tarde dominical en la Alameda Central (“Dream of a Sunday Afternoon in Alameda Park”). Catrina stands between images of a young Rivera and Posada himself. As a result of Rivera’s mural, La Calvera Catrina’s image grew in popularity, eventually becoming not only a symbol in Dia De Los Muertos celebrations held on November 1st and 2nd but one of the most prevalent symbols of Mexican culture today. 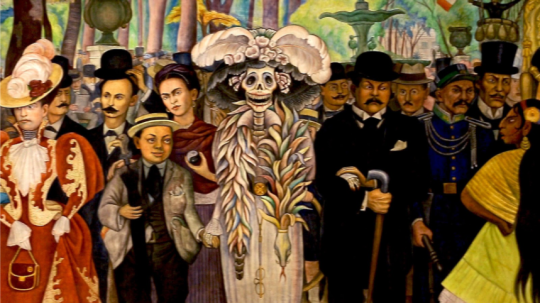 Posada has gained some posthumous recognition for his contributions to Mexican art. The study of his work by French art critic Jean Charlot in the mid 1920s led to his resurgence evidenced in the murals of the revolution and a museum dedicated to his work has been open in his hometown of Aguascalientes since 1972. Despite his significant influence he is little discussed outside of Mexico proving what Rivera once said true, that Posada’s work is, “so great that perhaps one day his name will be forgotten!” 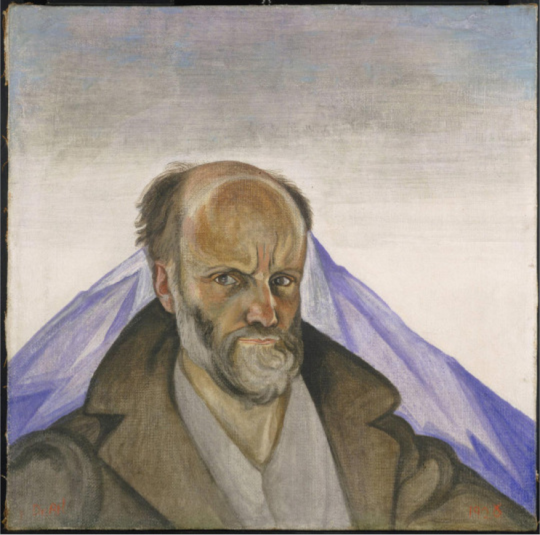 Self-Portrait with Popocatépetl by Dr. Atl from the Philadelphia Museum of Art

The Mexican Muralist Movement of which Diego Rivera was part ran from the mid 1920s through the 1970s. The movement was known for politically charged work often championing socialist ideals by commenting on the oppression of the working man and indigenous customs by the bourgeois in power.  Fittingly the murals blended traditional Mexican imagery with European painting styles, often citing the post-impressionism of Cezanne and the cubism of Picasso. Rivera’s status as the most identifiable name within this movement is due in large part to fellow artist and writer Gerardo Murillo, more commonly known as Dr. Atl.

In 1897, a young Murillo was sent to study painting in Europe with a pension granted to him by President Diaz, the very man he would rally against during the Mexican Revolution beginning in 1910. It was during this trip to Europe that Murillo not only refined his art and reportedly walked from Rome to Paris and Paris to Madrid, but also became involved with the Italian Socialist Party. In 1902 Murillo changed his name to Dr. Atl to adopt a more indigenous identity and upon returning to Mexico began his long career of revolutionizing Mexican art. 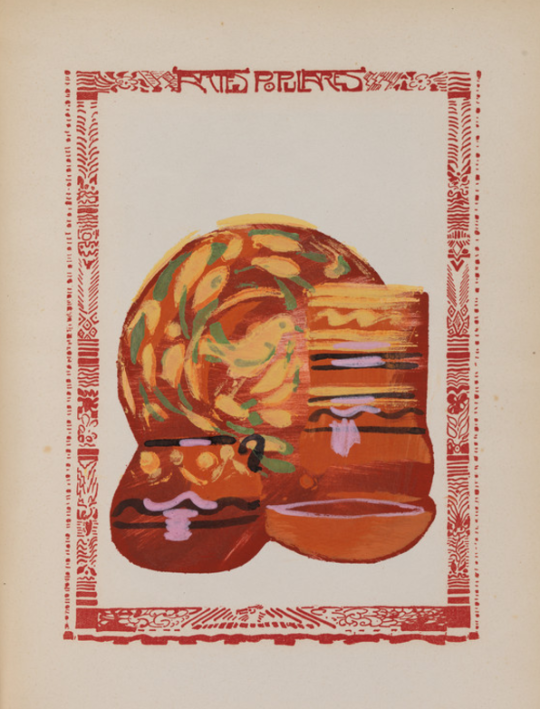 First, Dr. Atl defied convention by dismissing the academic study of the European Masters. Then in 1906, he wrote a manifesto promoting a National art movement focusing on the average man which would take art out of museums and outside to the people. Four years later, he painted what is considered the first modern mural using paints he created himself still known today as Atlcolors. When the Revolution broke months later Dr. Atl fought hard against his previous benefactor President Diaz in support of Venustiano Carranza. He even began pro-Carranza newspapers where he would mentor the two young men who weren’t Rivera that defined the Muralist Movement, David Alfaro Siqueiros and Jose Clemente Orozco. Over the next decade Dr. Atl continued to paint murals and landscapes, writing books which helped legitimize Mexican folk art as a serious artform, and mentoring young artists. It was during this time that he prompted his friends to buy out an exhibition of paintings by a largely unknown Rivera in order to fund the artist’s first trip to Europe. 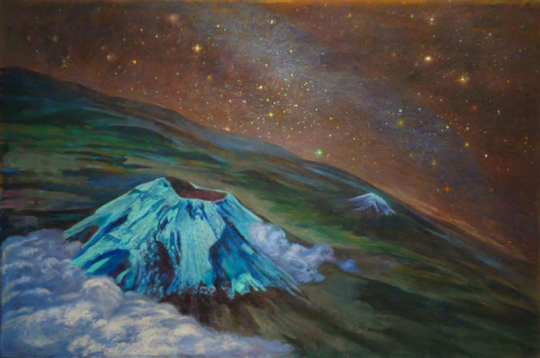 Throughout his career Dr. Atl often created landscape paintings of Mexico, focusing largely on the country’s volcanoes. In his late career he again revolutionized the field when he introduced aero-landscapes. In these radical paintings an artist would paint the land from above in a plane, helicopter, or some other means of height. Dr. Atl died in 1964 at the age of 88 supposedly still climbing mountains in order to gain the perspective he desired. 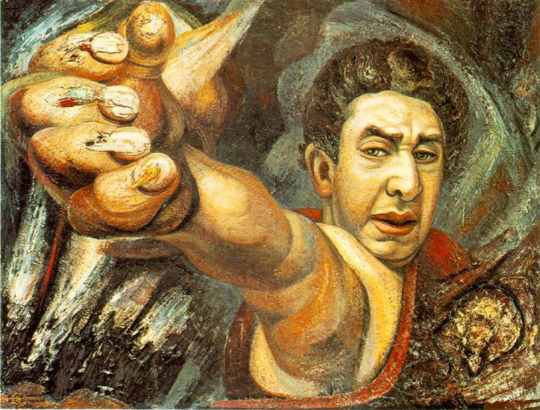 While Diego Rivera is certainly the most discussed of the Mexican Muralists, he was in fact only one of “the big three” artists who popularized the movement. The youngest and most rebellious of the three was David Alfaro Siqueiros, a man whose political leanings were controversial even within a group of revolutionaries. He left art school in 1914 at the age of 18 to fight in the Mexican Revolution on the side of Carranza’s Constitutional Army. This enlistment gave him the opportunity to travel Mexico, exposing him to the struggles faced by his people. In 1919, he traveled to Europe where he and his new friend Diego Rivera studied the massive frescos of the Renaissance masters. 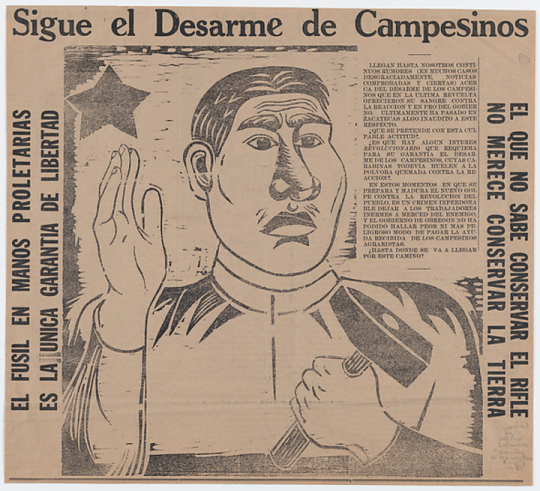 A page from the magazine ‘El Machete’ relating to the continued disarmament of the peasants, image of man with a hammer on verso by Siqueiros, the portrait of Karl Marx on verso by Guerrero by Siqueiros from the Metropolitan Museum of Art

After returning to Mexico, Siqueiros threw himself completely into what he viewed as the inseparable world of art and politics. In 1923, he began the Syndicate of Revolutionary Mexican Painters with Rivera and thusly Mexico’s Communist’s paper El Machete was born. The paper advocated for communal art as propaganda to educate the proletariat and overcome the bourgeois. Between 1920 and 1930 Siqueiros was jailed several times for his politics and even exiled. It was during a period of exile in 1932 that Siqueiros created what would become one of the most controversial art pieces in California history.

Siqueiros was asked by the Plaza Art Center to paint a mural on Olvera Street in Los Angeles featuring happy people in a bountiful tropical world. Instead he painted Tropical American: Oppressed and Destroyed by America a mural depicting destroyed Pre-Columbian art and snipers aiming at a U.S. Imperial Eagle sitting atop a crucifix on which an indigenous person is affixed. Needless to say, the mural was not what the Art Center had expected and within a year it was painted over. In 1988, the Getty began the funding efforts to restore the work, which were completed in 2012. 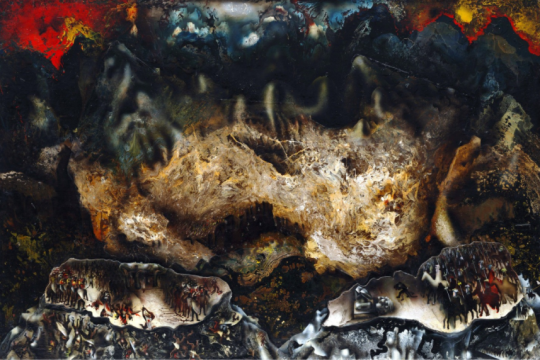 Shortly after his time in Los Angeles Siqueiros demonstrated that his revolutionary ideas did not apply only to politics. In 1936, he began an experimental workshop in New York. Here he introduced other artists to new painting methods including the use of projections to trace images onto walls for murals, airbrushing, and dripping or throwing paint onto a canvas or wall. This last method directly impacted the Abstract Expressionist art movement and specifically a young Jackson Pollock who attended the workshop.

Siqueiros did not leave the drama in the U.S.A when he finally returned to Mexico. On May 24th, 1940, Frida Kahlo’s ex-lover Leon Trotsky and his family were quietly sleeping in their Coyoacan home when Siqueiros and 25 of his Stalinist comrades led a raid on the compound. Descriptions of the event say that the house was suddenly besieged by the bullets of a machine gun and that amidst the chaos Trotsky and his wife Natalia huddled together in a corner. The assassin who came to check that the couple was dead mistook the bedsheets on the mattress for their bodies, shooting at the lumps before leaving the room. Three months later a successful assassination attempt left Trotsky dead with a pickaxe in his skull. 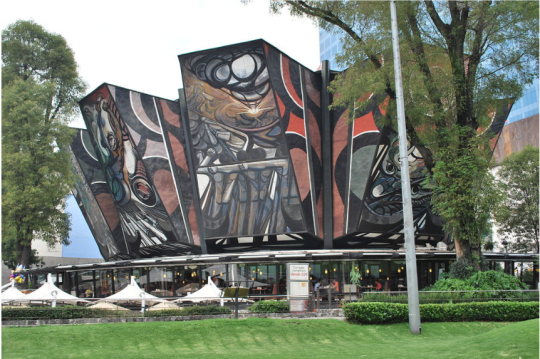 Siqueiros spent the rest of his life painting and protesting between stints in jail for his politics. His last major work, La Marcha de la Humanidad on the Polyforum Cultural Siqueiros, was once the world’s largest mural. The work is painted on a cultural center in Mexico City that incorporates the art itself with the building’s architecture. Each panel tells a different part of the story of man, and though much of it depicts struggle and confusion it ends on an optimistic note with a man and woman marching together into a bright future towards the peace that seemed so elusive to the restless Siqueiros.

Stay tuned next week when we continue our journey into Mexican art with three female Mexican artists who aren’t Frida Kahlo!