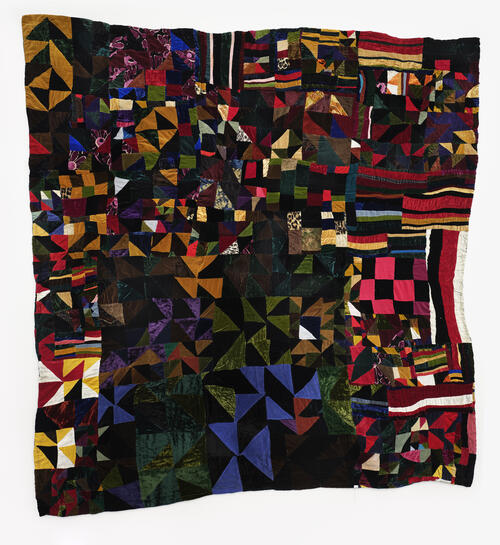 Walking through the Rosie Lee Tompkins exhibit that just opened up at the Berkeley Art Museum and Pacific Film Archive in Berkeley, one phrase kept reverberating through my mind: “an ordinary mystic.” There is a spiritual element to this artist’s quilt work that goes beyond her frequent incorporation of bible verse references stitched onto fabric and weaves its way through every subtle connection made in each joined-together piece of colorful texture. You can sense it in just one of the quilts, but when you view the 65+ quilts hung together on the wall in one sitting, it permeates your awareness in a deeply profound way. The artist combines her own diverse cultural background with the influence of the upcycled/repurposed culture of Bay Area arts scene to create a set of brightly-colored, vivid, and vibrant quilts that emanate their own energy.

Tompkins applies her Christian background in the irregularly embroidered numbers and letters cascading across the surface of many of her quilts. Rosie Lee Tompkins would sit down to a quilt, with both a theme and a specific human in mind, and she would meditatively and mindfully stitch together the varied pieces of fabric into something more than the sum of their parts; it was a spiritual practice. She would take the fabrics that others in the Bay Area were giving away or throwing out, find a theme within them, and bring new life to them through her creations. Her work was spiritual, meditative, and intentional. Tompkins’ work evokes a sense of everyday spirituality; it is also materially beautiful and certainly doesn’t require a religious interpretation if you yourself aren’t comfortable with or interested in one.

Tompkins' quilts caught the eye of Bay Area psychologist and art collector Eli Leon who had an ardent passion for African American quilts. When he passed away in 2018, he willed his entire collection, consisting of more than 3,000 quilts, to BAMPFA. It was a surprise to the museum but one that opened up a grand opportunity to delve deep into this niche of art. Of those 3,000 quilts, approximately 500 were created by Rosie Lee Tompkins. The museum curators knew that sharing the work with the public might best begin by introducing us all to her body of work. Although there are references to Leon in the collection, the curators intentionally made Rosie and her creations the star of this exhibit. A second exhibit is in the works for 2022, which will display a greater range of artists from the quilt collection along with additional information about Leon.

Exhibit co-curator Elaine Yau has been delving deep into a socio-cultural, historical perspective on the artist’s work. Until relatively recently, the art world looked at Tompkins solely from a formal perspective. This was due in large part to the fact that Tompkins wanted to keep her life private. In fact, Rosie Lee Tompkins is actually a chosen pseudonym for the artist born Effie Mae Howard. Notably, although she was called Rosie throughout her artistic life, she has embroidered her original name, Effie, on to the borders and faces of many of the quilts that you’ll see in the exhibit. Nevertheless, she refrained from engaging extensively with the art world. This is not to suggest that her work hasn’t been seen before. Co-curator Larry Rinder remembers first coming across her work in 1996 at a Richmond Art Center exhibit by Eli Leon, an experience which moved him so much that Rinder went on to help launch her first solo exhibit at BAMPFA. However, it is only since Tompkins’ death in 2006 that the art world has been looking, as Yau has, at the way the artist fits into the narrative landscape within which her work was created.

Yau emphasizes that we have to consider Tompkins’ work in light of The Great Migration as well as her experiences in the Bay Area as an adult. Effie Mae Howard was born in Arkansas in 1936, a child of The Great Depression and World War II. She learned quilting as a child, taught by her mother, passed down from a lineage of African-American women living in the South. She left the region  in hopes of better opportunities, ending up in the San Francisco Bay Area by way of Chicago then Milwaukee. Once she arrived here, she was influenced by the late 1970s urban arts scene. In particular, there was a culture of re-use (or what we would now term upcycling). She would head to Thrift Town and Value Village and the many flea markets throughout the Bay Area, collecting fabrics and notions as she went along. She stitched together her own identity as an artist, joining her mother’s visual and tactile quilting lessons with her new Bay Area experiences and inspirations, and the result is a body of work that shows both consistency and growth over time. 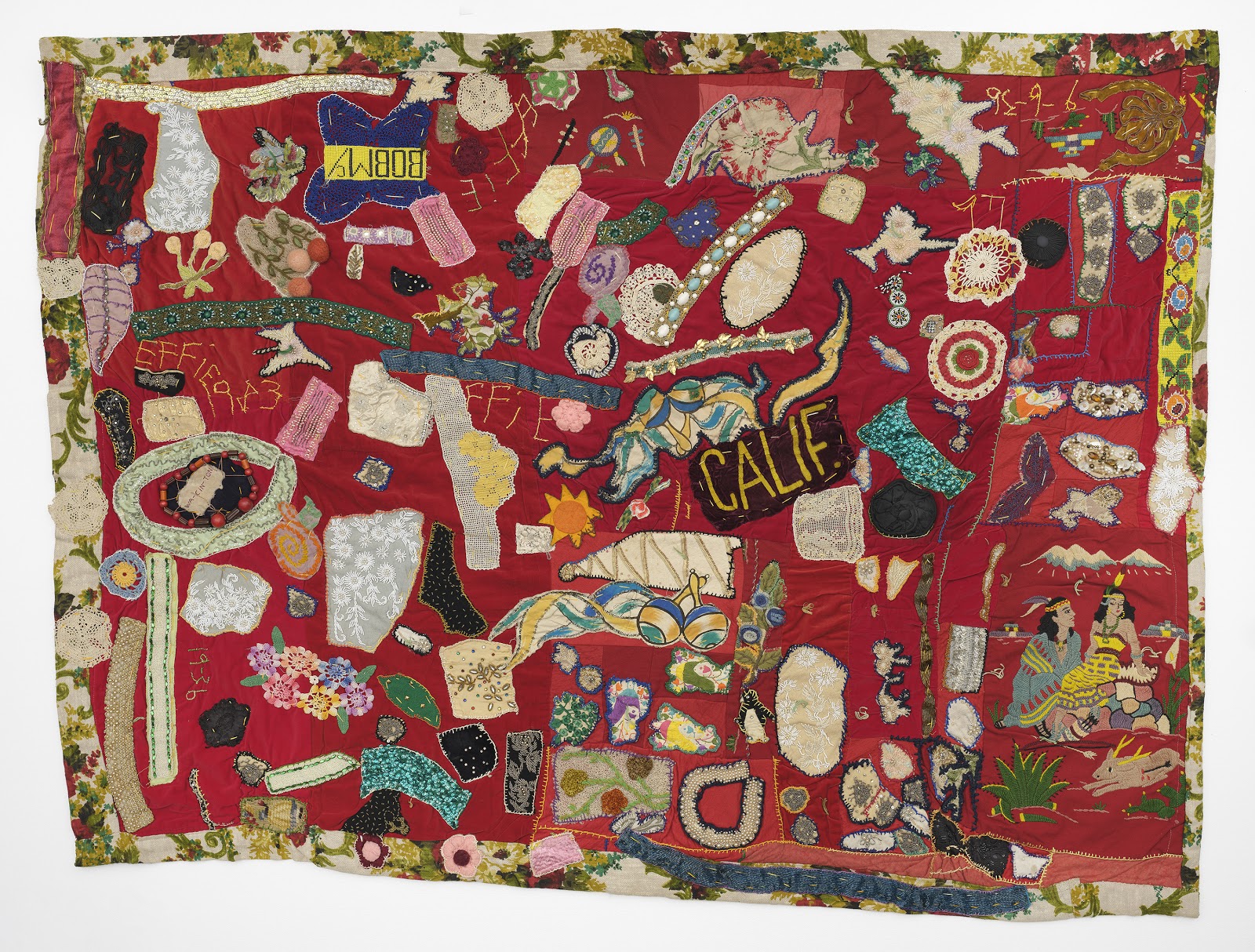 There are a couple of quilts in the exhibit that date to the 1970s but most of them were created in the two decades starting in the early 1980s and leading nearly up to her death. The first two quilts that you’ll see as you enter the exhibit are early pieces that instantly tell you a lot about what you’re going to find as you venture along. Both pieces are large quilts that at first glance look chaotic. They each incorporate a range of different fabrics as well as utilization of a variety of techniques drawn not only from quilting but also including embroidery and other handcrafts. Tompkins’ pushed the boundaries of what a “quilt” could be. Once you realize that there is a theme, you can see that Tompkins set parameters for herself, but then allowed herself to go wild within those parameters, and it is this exact combination of restraint and fluid creation that makes her work so uniquely hers. 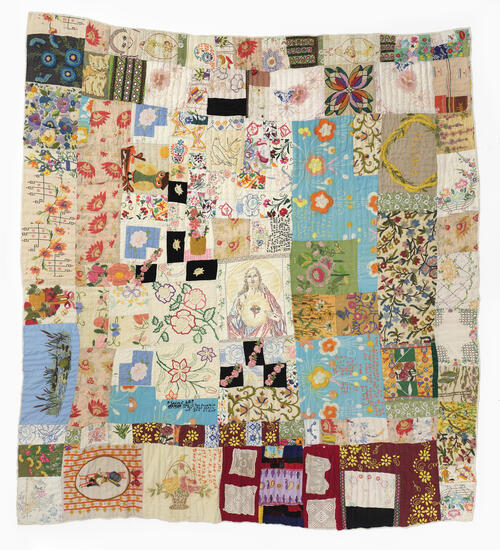 The first room offers just a taste of what is to come. We see Tompkins’ creativity flourish as we enter the second room, which is themed around assemblage and applique work. In this room, we see Tompkins’ take on a classic “crazy quilt.” Seeing several pieces hung together, it becomes obvious that the artist has a broad vocabulary for quilting, and she continues to put her own spin on traditional techniques. Some pieces are dense and almost cluttered, but she never loses track of her sense for composition and shows exquisite skill in her variation of it from piece to piece. Make sure that you take the time when you are in the applique room to turn your attention away from the quilts for a moment and towards the case in the center of the room where half a dozen “jewelry Christmas trees” are showcased. These were found in a closet of her home, perhaps originally intended for her eyes only, but they are jewels that glitter so bright that it would have been a shame to keep them stuck in a closet. Tompkins had a love for glitter, sparkle, ribbon, sequins, and all things a little bit extra. She combines them densely on these sculptural forms, creating a three-dimensional version of her quilt style. 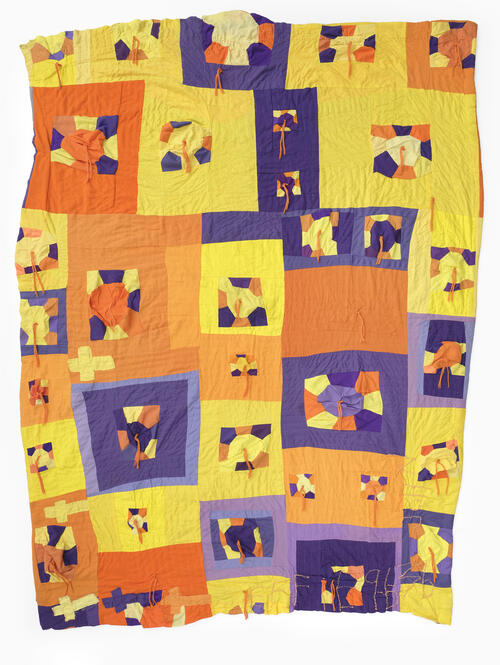 The next room of the exhibit can’t be missed - you couldn’t fail to notice it - because of the three bright yellow/orange/purple pieces that stand out in the corner. The curators have called this room "Personal Symbolism," and it is the best representation in the exhibit of how Tompkins combined her traditional Christian beliefs with her personal lived experience as well as other elements of transcendental, mystical spirituality. These pieces are called The Three Sixes. They loosely represent three people in her family who all had birthdays with the number six in them. The first is her own birthday: 9/6/36 which seems to have taken on a magical quality for her. She stitches it frequently into the surface of her quilts, sometimes written out directly and sometimes written backwards. The second color and number in the Three Sixes represents her grandfather, a family member she grew up with. The third represents a number of different people - a great uncle, a cousin, a brother. In any case, there is a magical quality to the numbers that Tompkins draws from. However, co-curator Yau points out that sometimes the artist took liberties with her math. For example, there’s a piece that’s a “Thirty-six Nine-patch quilt.” The nine-patch is a traditional quilting technique. Tompkins’ often puts her own twist on classic techniques and this is no exception. In this case, she’s worked the numbers of her birth date in to create a set of 36 9-patches, except that as Yau points out, there are strictly only 33, and you have to count certain yarn ties to get to the “correct” or intended 36. Nevertheless, the gist is there, the cohesion between all of the pieces in the series is undeniable, and there is something a bit mystical about the number play at work here. 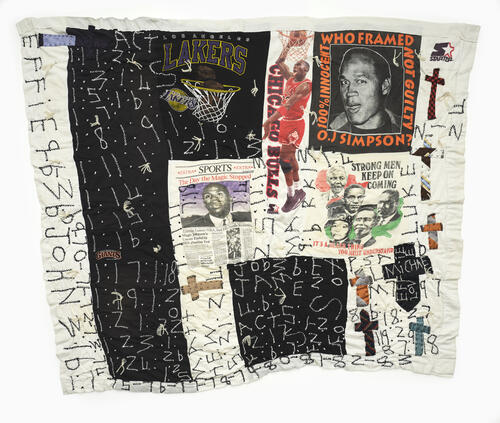 When we head to the next room, we see a visible shift in the artist’s work. The pieces collected here represent her cultural concerns. Mostly created in the late 1990s, Tompkins has composed quilts with specific themes in mind, although it’s not always easy to guess exactly what she was trying to say. For example, there is a piece with a big image of OJ Simpson right at the top. The piece includes other prominent Pan-African leaders and celebrities. There is clear thematic cohesion and yet it raises questions as to what precisely she was trying to say. Although this is a political piece, it is also highly personal. Her name, Effie, is stitched not only on the border but also on a cross that says “Michael + Effie + Love” (likely referring to the nearby image of Michael Jordan). And this is where all of her life’s work seems to coalesce, as she combines a deep mindful meditation with both personal and socio-political issues. 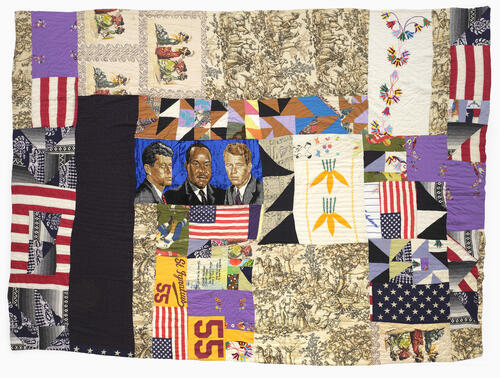 Another quilt in this section prominently features an image of the Kennedy brothers with Martin Luther King Jr.. It is surrounded by several different versions of the American flag, positioned both vertically and horizontally. Within this, though, the thematic stripes of the flag are repeated in other fabrics including an Indian-inspired batik and a Mexican stripe drawn pulled from serape fabric. There are pastoral scenes here that seem almost colonial with a Latin American reference in a piece of fabric showing flamenco dancers. The statements here are bold and striking. 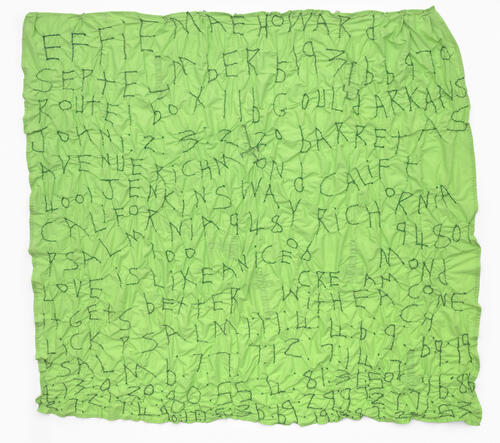 In her latest years, Tompkins’ work became more overtly religious. The final room consists of many pieces incorporating crosses and other religious symbolism. Then there are two striking pieces at the very end that bring a sense of closure to the entire show. The penultimate piece is a non-quilted single-piece embroidered green-on-green that combines her personal details (including her name and address) with Christian scripture verses as well as a quote that “love is like an ice cream cone; it gets better with every lick.” The last is a black-on-black embroidered quilt that is slightly reminiscent of a funeral gown. Compared to the bright colors, textures, and pictorial narratives of the other rooms, this is understated and yet astoundingly powerful. We see the artist come full circle as we circle through the rooms of this exhibit. Rosie Lee Tompkins: A Retrospective is on display at the Berkeley Art Museum and Pacific Film Archive (BAMPFA) at 2155 Center Street in Berkeley, CA. The exhibit runs from 2/19/20 - 7/19/20. It is the largest-ever retrospective of the artist’s work.

BAMPFA galleries are open 11-7 Wednesday - Sunday. General admission is $14 with discounts / free admission available to varied populations including students, UC Berkeley staff, seniors and children. Galleries are free to all on the first Thursday of every month.

Special events for this exhibit include: