Every Day is Leg Day at the Legion of Honor 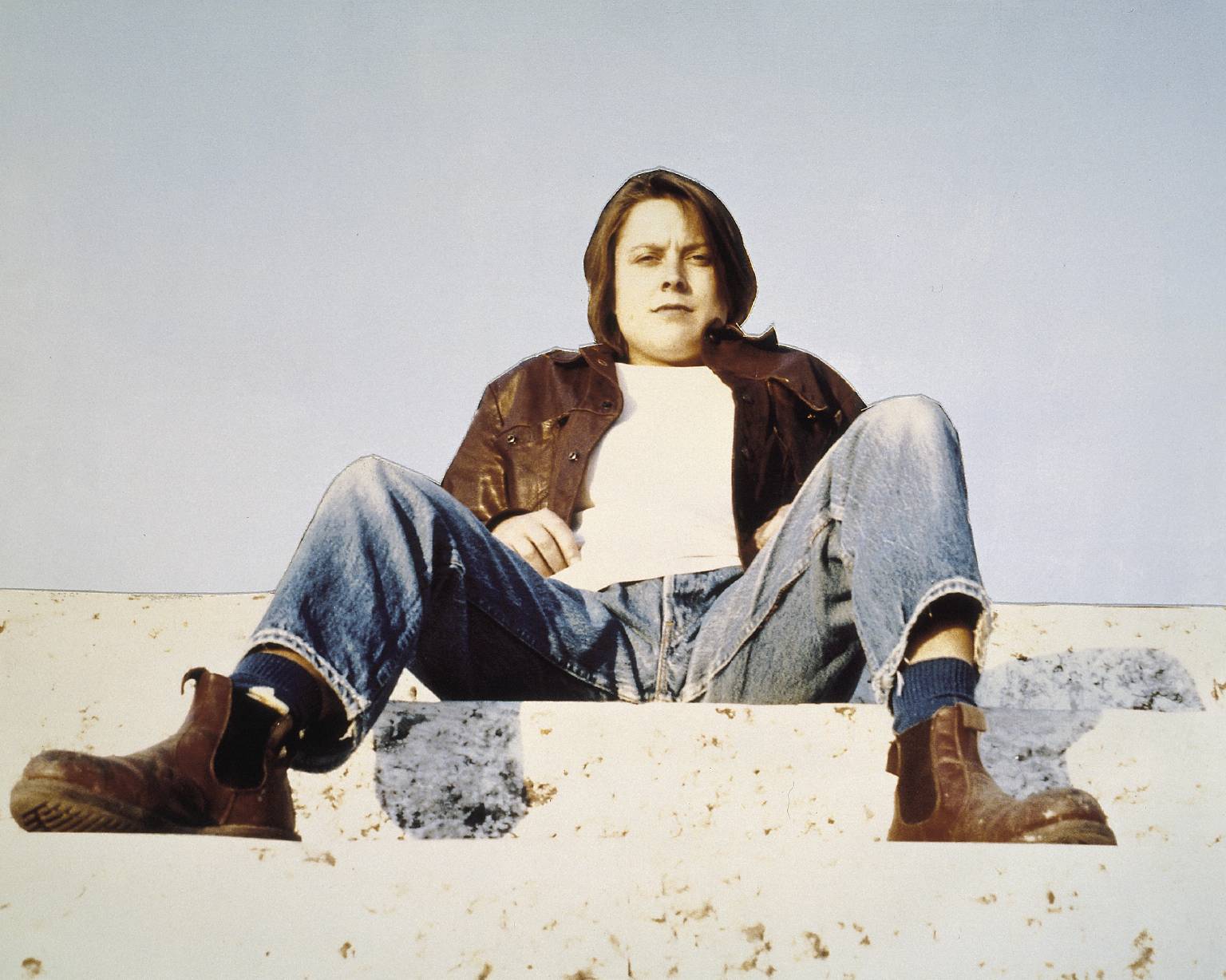 “You get what you get,” Sarah Lucas hurriedly blurts out when passed the nearly inaudible, booming microphone at the preview of her first major U.S. exhibition, Good Muse, on view at the Legion of Honor until September 17th. In case you've been there done that with Degas, Manet, and fancy hats, you can take a refreshing dip into Lucas' playful private parts, all for the price of general admission.

She keeps it casual, not trying to infuse her work with unnecessary flourished interpretations about what she’s “fighting for” or what her cheeky (yes, pun intended) sculptures symbolize. She wants to let her practice speak for itself, I think. This is precisely what we love about her―like a perfectly on-point meme or an “aha!” moment of clarity, her work doesn't try to make you feel something, it just does. It is what it is.

“It’s fun” she says briefly. And it is fun―it’s the best thing to come from across the pond since BBC one, fish n’ chips, and Hugh Grant circa Notting Hill.

An originator of the 90s British art movement dubbed “Young British Artists,” Lucas gained fame for her irreverent take on feminist art. She forged her way with humorous sculptures and photographs laced with more substance than Damien Hirst could convey through a million of his creepy cadavers in formaldehyde. What to expect? Well, there are more boobs and butts than a bacchanal scene, but there's also a purpose. We're here to give you the low down, so that you can have a leg up when you visit the exhibition. 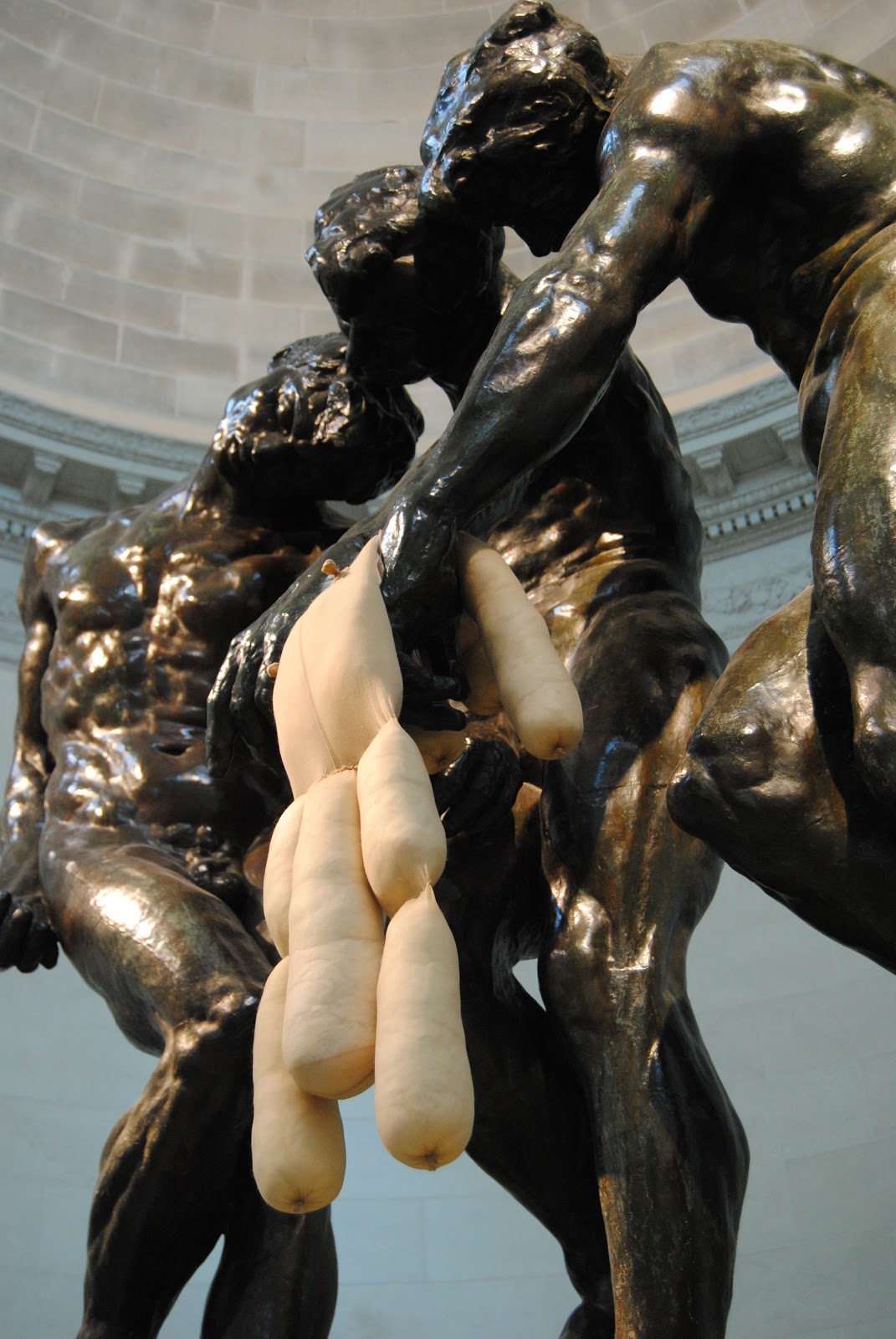 There are about six rooms that poise Lucas’ sculptures amidst (and even strewn over as) the bronzes of Auguste Rodin. While I wouldn't be surprised if he were turning over in his grave as we speak, we're ecstatic to see these two artists exhibited together, as Lucas' work reminds us to remain critical of Rodin's imagery―especially how he depicts women―even though he's long been apart of the canon of "genius" artists.

Lucas combats the "male gaze," the holy grail of all art history terms, that basically means "to see women through the perspective of men." She works to erase this history, change how women's bodies are viewed, and to find her voice in a conversation that has been dominated by men for far too long. All I can say is...

The kingpin of the exhibition is a giant pair of concrete boots that defiantly face-off with the contorted forms of Rodin’s Gates of Hell. If normal boots are made for walking, these ones are made for trampling all over gender biases and swiftly kicking anyone in the face who stands in the way of that mission. 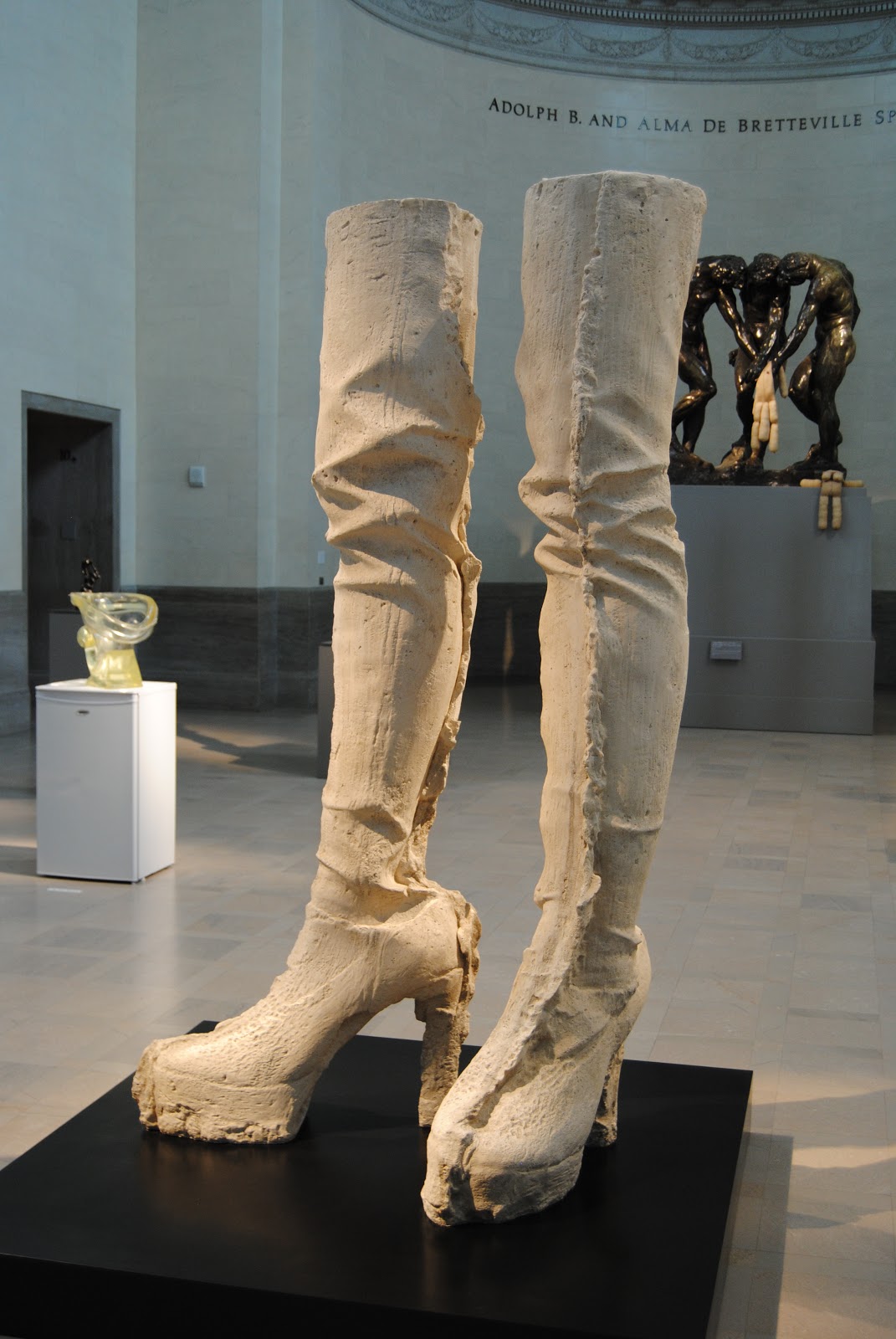 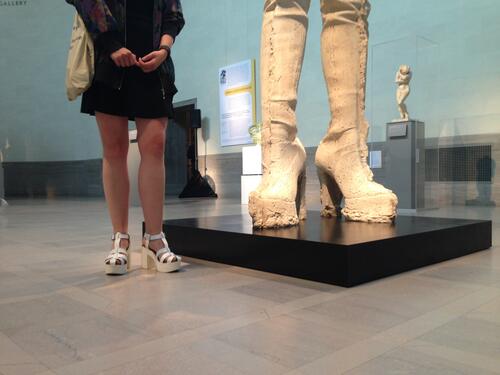 Silke came prepared with some statement shoes of her own.

It’s not only the boots themselves that conjure this image but also the stance―you can almost imagine how the rest of the body would be postured if it were present, but the fact that it isn’t there makes the self-assured confidence of the boots that much more palpable. They’re loud, proud, monolithic, and ready to take on the world.

Dispersed around the boots are Fountain style Floppy Toilet bowls perched on top of refrigerators, which reference the insides of the body―what goes in must come out. The toilets are made of yellowish resin to resemble different shades of pee, some more burnt yellow, while others, like this one, sport a more greenish tinge (too many brussel sprouts maybe). The shape of the toilet has always been appealing to Lucas for its sensuality and resemblance to a woman's curves. Now if you ever see me drinking wine and having heart-to-hearts with my toilet, you'll know why. 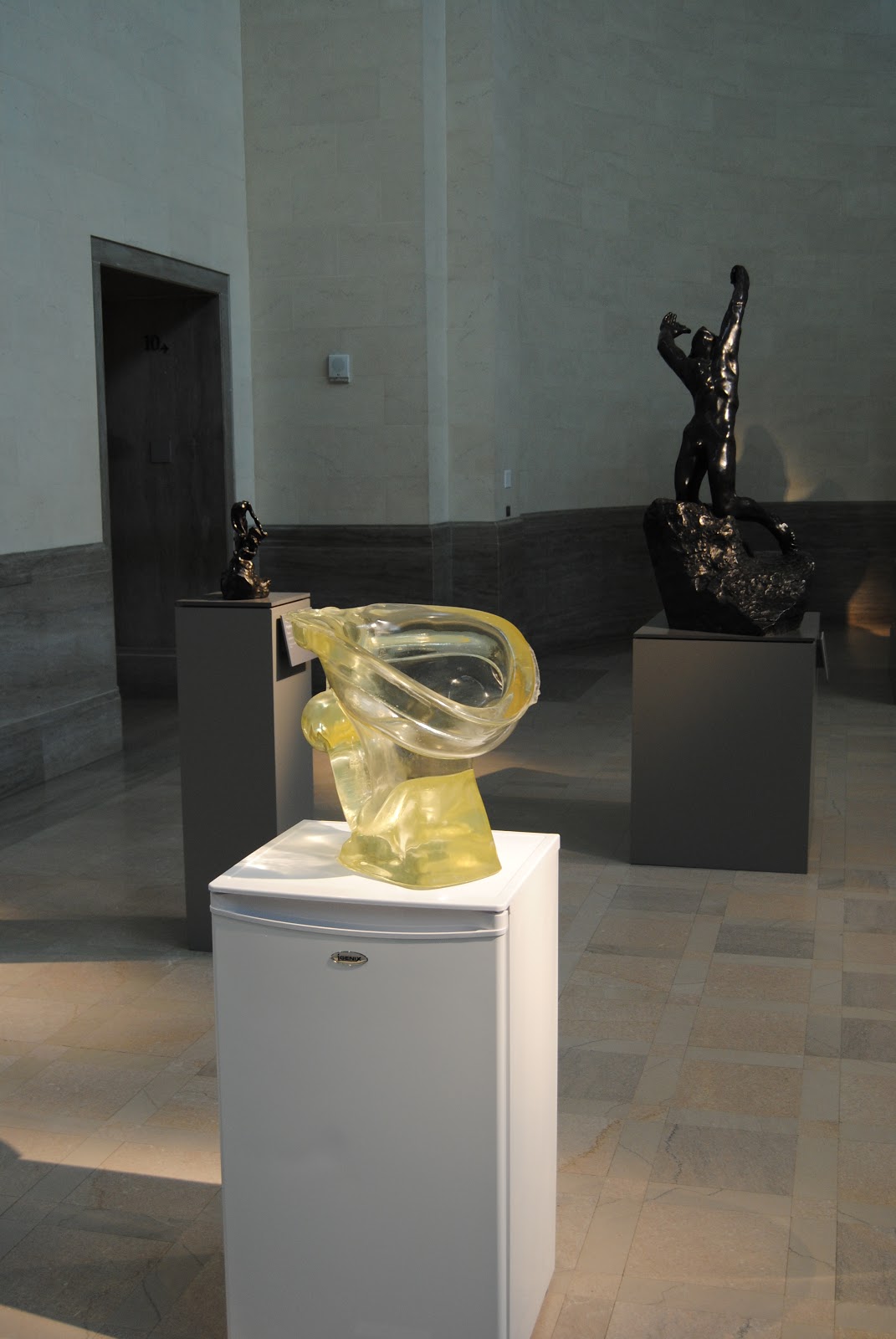 Step into the rotunda and you can see how Lucas reinterprets the "muse," imbuing the role with an agency that it never had with Rodin. Sarah’s muses are her inspirations and dear friends; she takes plaster casts of their bodies from the waist down, affectionately titling them with the name of the individual represented. Take Pauline, for example, which seems to almost stand up as straight the stuffy Baroque portrait to her right. 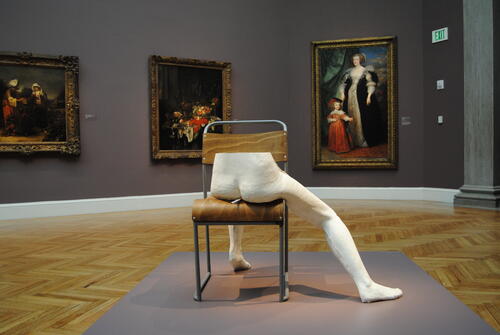 The cigarette peeking out from the bottom is her point of disturbance. Her subtle "haha" that forces you to look a bit longer at something that otherwise might just seem normal objectifying statue. She even proudly displayed a cast of her own body for the 2015 Venice Biennale. Lucas remarked in a press interview that the cigarette rearing orifices are actually quite expressive in their own right, almost standing in for the absent faces. I know, once you see it as a face you can't see it any other way. I'm sorry in advance. 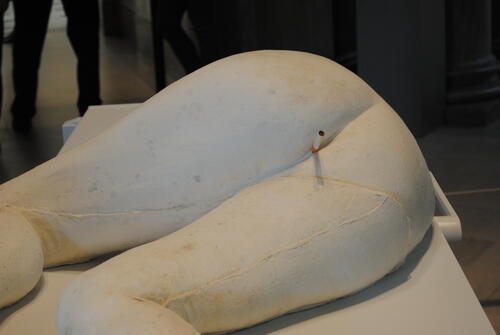 Now that's what I call a cigarette butt.

At this point you may be asking yourself, "but where are the boob bouquets, eggs, and giant penises?!" Not to worry―it's all there. Here's one, for your viewing pleasure, that sports a bushel o' boobs, anchored by two slender legs that gracefully swoop down to the floor like a beautiful fertility goddess. 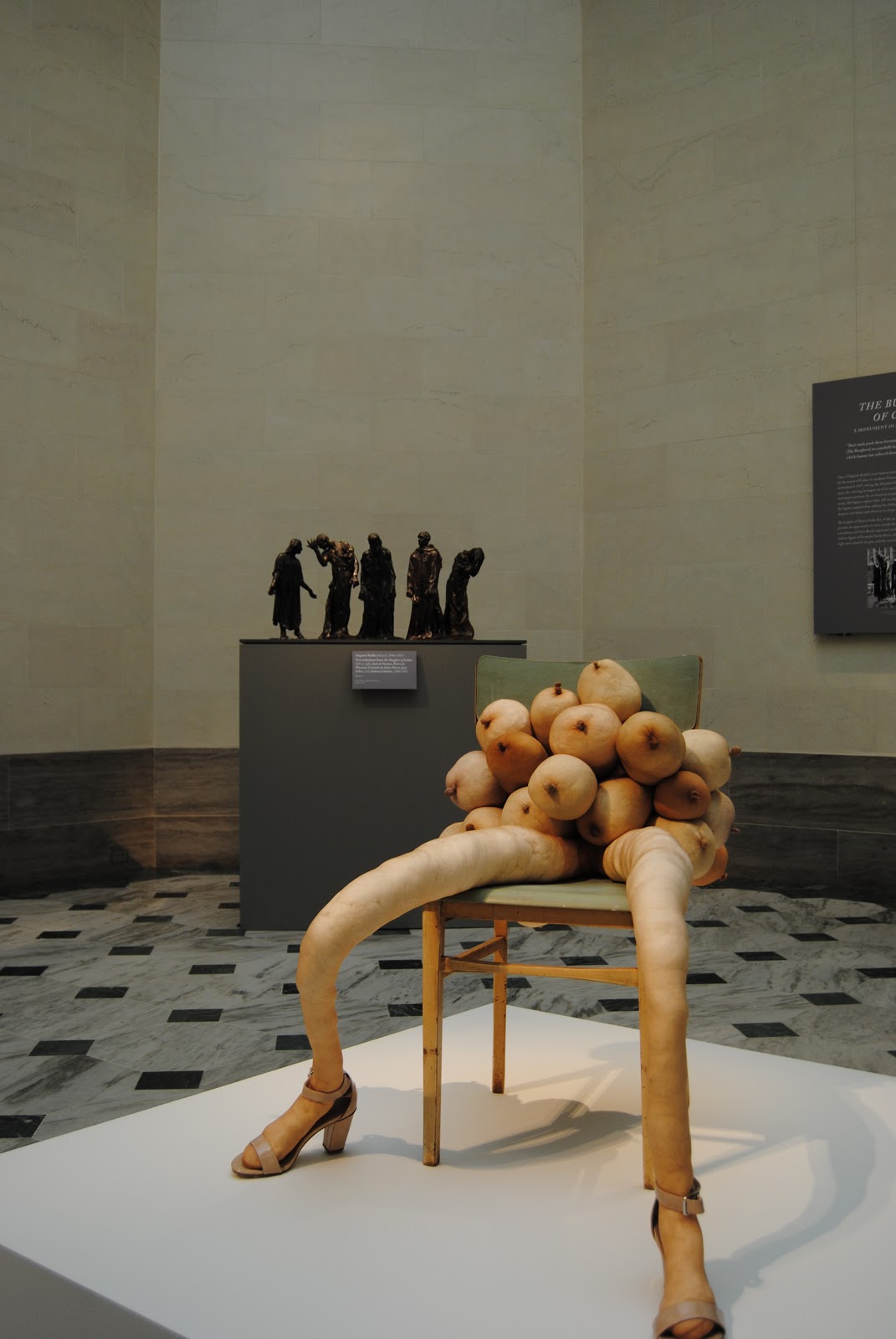 If you're looking for less body parts but more breakfast foods, you can stroll over to this next piece that boasts two diner-worthy, perfectly fried eggs, Lucas' signature motif. Needless to say, this exhibition made me a little hungry. 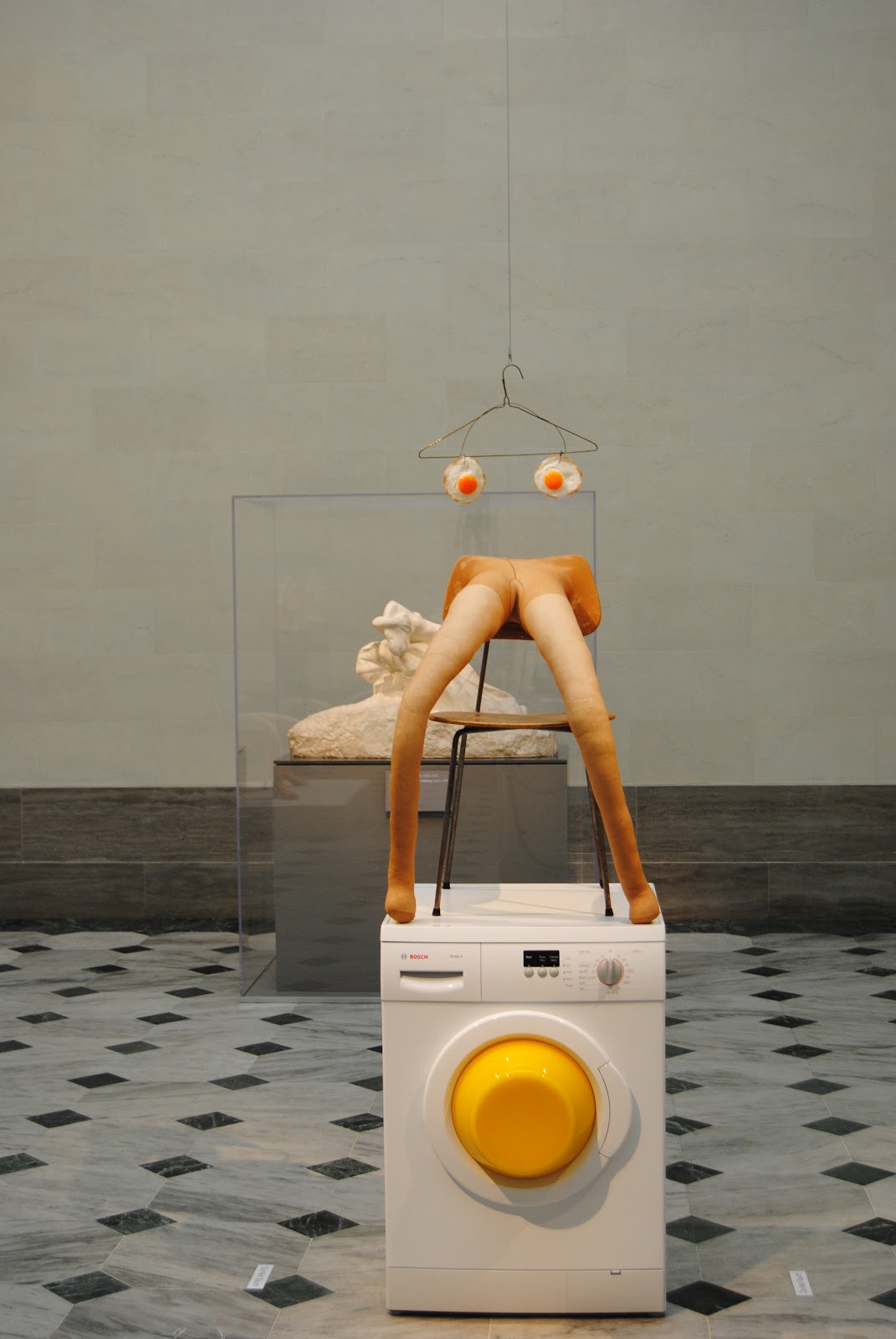 We're rating this show 10/10 and definitely worth a visit. It's enough to get you riled up and inspired to create some desperately needed change in today's political climate. So, what are you waiting for? Go be the Sarah Lucas that you wish to see in the world.