Casanova: The Seduction of Europe at the Legion of Honor

It looks like a little bit of seduction has arrived in San Francisco just in time for Valentine’s Day. That’s right, the new exhibit at the Legion of Honor is all about the world of everyone’s favorite philanderer, Giacomo Casanova. A sumptuous exploration of the intertwined social, political, and material climate of mid-18th century Europe in which Casanova moved, this exhibit brings together over 200 objects and has something for everyone, no matter what your feelings on Rococo art may be. 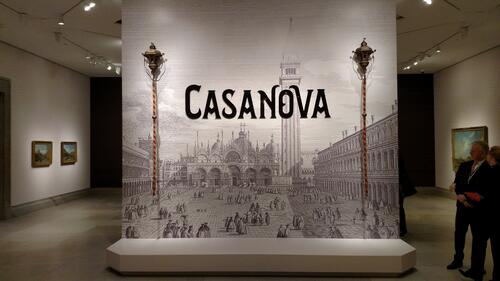 The best way to prepare for this exhibit is definitely by watching the BBC special starring David Tennant, of course.

It has its moments.  At the exhibition, I chose to imagine Casanova as David Tennant, but that is purely optional.

The exhibit takes pains to emphasize Casanova’s many achievements besides his success as a lothario.  He was at various points in his life an actor, priest, diplomat, spy, writer, and even a librarian (giving new meaning to the term Sexy Librarian).  In his spare time he read theological tracts, practiced kabbalism, and even translated the Iliad into Italian just for the heck of it. More than just tools to lure people to his bed, however, his magnetic charm and vast intellect are what enabled him to rise to unparalleled heights as a self-made man in a Europe still largely beholden to rigid class structures.

Indeed, this is why curators found in Casanova an ideal tour guide for the 18th century.  The man seemed to go everywhere, do everything, and know everyone, and if he lived today, curator Melissa Buron assures us, he would be your annoying friend on facebook whose awesome life makes you jealous.

The galleries are largely organized by the different art capitals he visited.  It starts in Venice, the city of his birth, with a room dominated by glittering Canaletto landscapes, like this one. 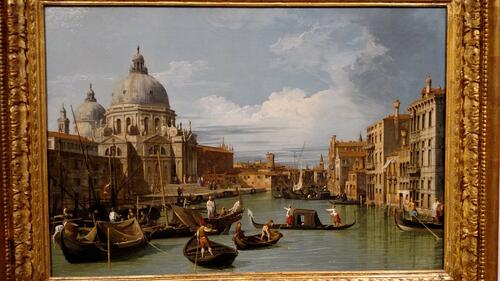 Entrance to the Grand Canal by Canaletto at the The Museum of Fine Arts, Houston

These canals are where young Casanova, the child of lowly actors, supposedly saved a nobleman with whom he was sharing a gondola and who was having a stroke. This turned out to be a stroke of good luck for Casanova, because the nobleman was so thankful he installed him in his house and gave him an allowance and a gondola of his own, giving Casanova his own mode of transportation and a big boost into the noble sphere.

Transportation is a major theme of the show.  Casanova himself traveled more than 40,000 miles in his lifetime, which is astonishing giving the expense and hazards of travel at the time.  He traveled to London, Paris, Dresden, and even as far as St. Petersburg and the Ottoman Empire. One particularly delightful object on display was this luxurious sedan chair made in Naples. 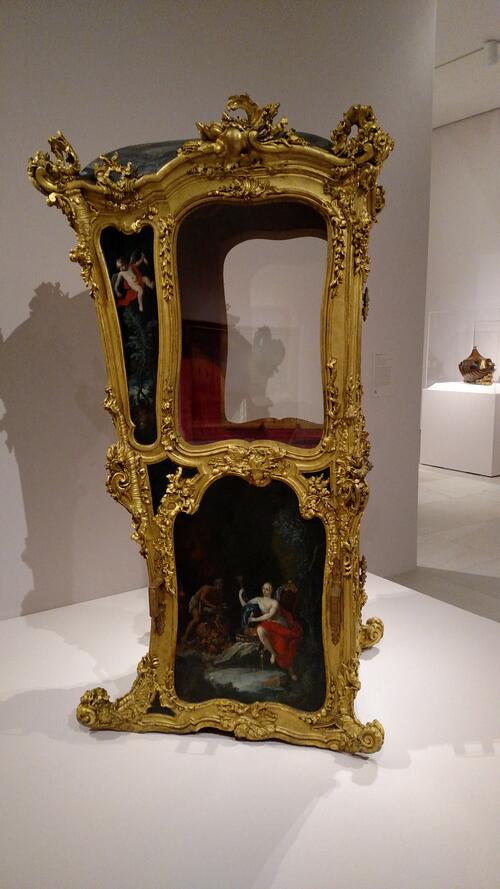 To be honest, this looks like a nicer way to commute than BART.

In keeping with neoclassical ideals, this conveyance is decorated with images from the Aeneid, a famous travel story if ever there were one. But it’s pretty snort-worthy to compare being carried on the shoulders of servants to the harrowing journey of Aeneas.  Furthermore, the ornate detailing indicates it was likely used exclusively indoors for being carried from one room in a palace to another. That earns snort number two. One amusing anecdote recalled by curator Martin Chapman is that Versailles kept a cupboard just for the poles on which these conveyances were hoisted, the reason being that if they weren’t stored away, the servants who were waiting for their masters would use them to fight each other.

Ridiculous though these 1 percenters may seem, this was the world of wealth with which Casanova was able to surround himself.  Much of the art on display is extremely sensual. The Rococo heralded a departure from the drama of the Baroque and a return to lightness, whimsy, curves and opulence. There’s glitz and glam in the form of glimmering candelabra, gilt toilette sets, elaborate tureens shaped like pigeons, and extravagant table settings.  One rather innovative aspect of the show is a table top with a screen that shows a video of an 18th century meal unfolding from a participant’s, or bird’s eye, view. 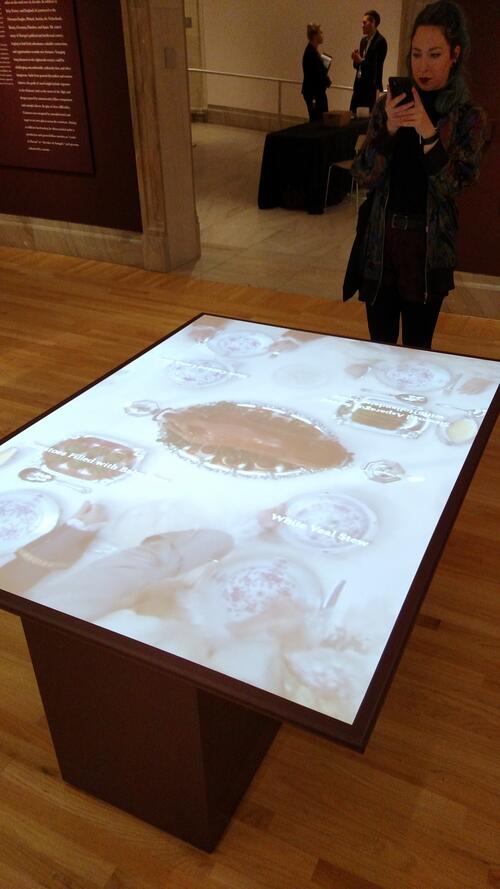 Meals were taken with service à la française, meaning many dishes were served on the table at once. (Basically, if Downton Abbey is your reference point for fancy customs, it would be good to note that that is NOT how meals were conducted in Casanova’s day. No footman stopping at each plate to serve you every item.) When it came to platters of food, if you couldn’t reach it, you couldn’t eat it.  And never did someone reach as far, and indulge so much, as Casanova. Ever the Gastronome, he wrote a lot about food in his 3,500 page autobiography, frequently describing how he used it to seduce the ladies.

The paintings themselves from this period are seductive in their own way, airy, playful and luxurious. Sometimes it seems odd that the Age of Reason should beget such lighthearted art, but the intense intellectual changes were also bringing about changes in morality and priorities, especially among the privileged classes. And invariably the artwork produced for the upper classes still relied on an educated audience to understand the programs of classical mythology, like in Giovanni Battista Tiepolo’s The Empire of Flora. 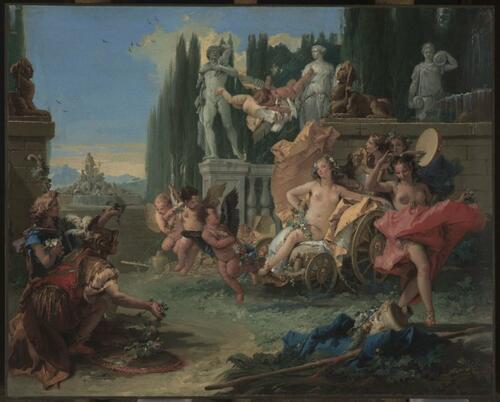 Sumptuous to look upon? Yes. Lots of beautiful nudes prancing about? Yes. But still laden with 18th century Europe’s favorite thing--classical symbolism. The same can be said for the similarly bright, pastel series of mythological panels by François Boucher that has been reunited for the first time in living memory in this exhibition.

While the exhibit tries its best to present a well-rounded look at an impossibly multi-faceted man, there is an undeniable strain of eroticism that runs throughout the entire show.  The 18th century was indeed the age of Libertinage, the chief libertine probably being our dude himself, who detailed sexual encounters with over 100 people in his autobiography, which only covers the first 49 years of his life.  Being a libertine involved a freethinking attitude toward sex and a lack of moral responsibility to one’s partners. It was also a role exclusively reserved for males. Love and sexual encounters make up the subject matter of many paintings from this time, but even these are often couched in terms of peasants or mythological characters (and *poof*, it’s no longer erotic art, it’s History Painting!). As long as aristocrats (particularly young ladies) didn’t identify too closely with the sexual beings in the paintings they saw, it was okay. 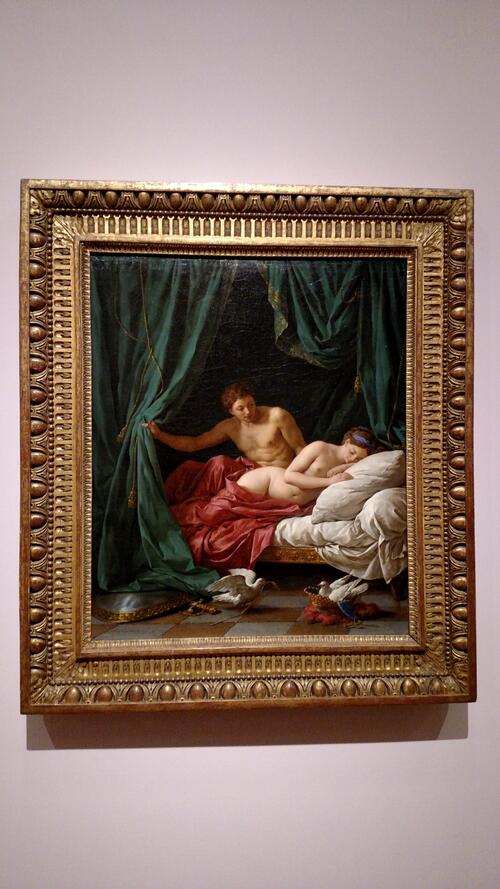 See, because of the doves and shield on the floor, this painting isn’t sexy at all! It’s an allegory! The racier images included in the show (and believe me, there are some pretty racy ones--ones without a single symbol of classical mythology!) would have been commissioned and kept in private.

The theme of identity is perhaps the most richly explored in this show.  Between the Masquerade culture of Casanova’s native Venice and the spectacle and studied social norms that made up daily life, identity became more fluid and performative than ever before. Someone as skillful as Casanova, both actor in and author of his own fate, was able to slip into roles and play to his audiences to achieve his own ends.  On display are three beautiful tableaux of mannequins dressed in rich mid-18th century garb, set up to be acting out scenes of mischief.  Their clothes, exquisitely detailed down to the very shoes concealed under their skirts, are what transform the mannequins into people of a certain class, and the scenes they act out are typical of members of those class, like scenes in a Mozart opera or Commedia Dell’arte play.  These mannequins effectively demonstrate the theatre of everyday life. 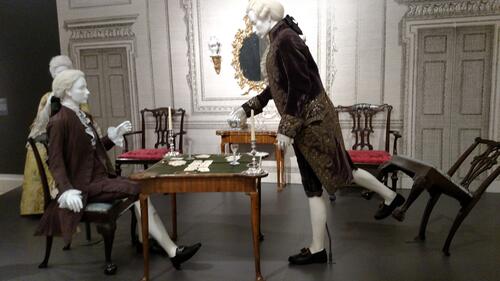 An action-packed tableau.  Looks like someone’s been cheating at cards.

And yet one wonders how to account for the real Casanova.  Who was this Chameleon underneath it all?  He seems to have embodied the words of contemporary philosopher Jean-Jacques Rousseau, who said, “The man of the world is wholly his mask.  What he is, is nothing.  What he appears to be, is everything.”

This exhibition paints a complicated portrait of a fascinating man who lived in a fascinating time.  With well-explored themes of wealth, transportation, identity, and love, it provides rich food for thought as well as a feast for the eyes.

If you go, there are many curious, whimsical, and salacious details you will find if you look closely through the exhibit at the works on display.  Keep your eyes peeled and you might discover:

And if those things don’t entice you to see the show, I don’t know what will. The exhibit runs from now until May 28, 2018 at the Legion of Honor in San Francisco. More information can be found here.

If you go, you won't regret it, and you'll be sure to see art differently. 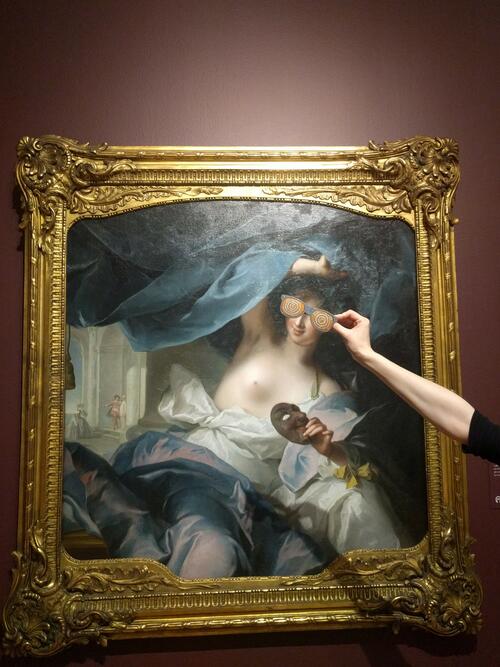 Thalia, Muse of Comedy by Jean-Marc Nattier at the Legion of Honor.  (With our signature glasses.)